Chrissy Teigen wants you to know she did not get lip fillers, she just bit an orange.

The 35-year-old cookbook author and entrepreneur showed off her swollen lip on her Instagram Story on Saturday, sharing that she believes it happened due to a reaction to a “pesticide” on the fruit she ate.

“You’re all just going to think that I got lip fillers but I didn’t get lip fillers between last night and now. I bit an orange to try and open it and I think there must have been a pesticide on it or something. Look at this. It’s hard.”

In another Story, after doing her makeup, she wrote that her nose was swollen as well. “I feel like it’s getting bigger,” she later added in another video. 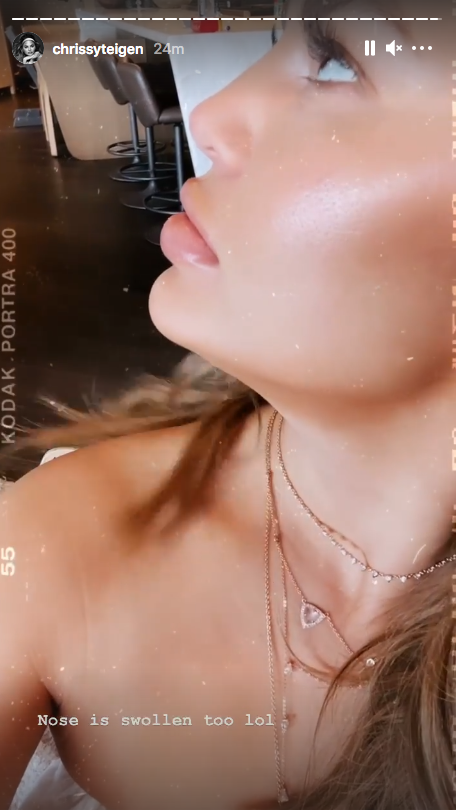 This isn’t the first time, she’s had a reaction like this. Back in August 2019, she shared that her lips got swollen after a crazy reaction due to altitude sickness.

“Very upset and saddened that my own birth state, Utah, has chosen to poison me with terrible altitude sickness,” Teigen first tweeted, followed by a photo of her swollen lips. “Did u know angioedema can be triggered from altitude sickness? Learn something new every day! My lip about to explode. Goodbye world.”

did u know angioedema can be triggered from altitude sickness? learn something new every day! my lip about to explode. goodbye world pic.twitter.com/3uMfbCJYn5

To help with the swelling, she inhaled oxygen from a can. “Oh yeah, that’s good,” she said in another clip.

Additionally, last year, parts of her tongue were “falling off” due to the sour candy she’d been eating at night.

“Fair warning: Do not continue this video if you’re squeamish,” she told her followers before giving them a look at her discolored tongue, which appeared to have patches missing from the top. “I told you, I’m eating so much sour candy that my tongue is falling off. Look at this.”

See more in the video below.

Why Chrissy Teigen Says Her Tongue is ‘Literally Falling Off’

Why Chrissy Teigen Says Her Tongue is ‘Literally Falling Off’