As the 2016 presidential election taught us, anything is possible and you should never under or overestimate a candidate. With the 2020 election solidly underway, Kanye West, who is legitimately considering changing his legal name to Christian Genius Billionaire Kanye West, apparently has his sights set on 2024.

Talking to a hoard of people at Fast Company‘s Innovation Festival, Kanye shed some light on his life. Some of the more interesting revelations were about him once reading color psychology to Kim Kardashian while she took a bath, how he thinks using an iPhone is basically like playing with dirt, and that he’s working on his presidential campaign.

In fact, Kanye said that when the time finally comes to kick his campaign into gear, it’s going to be a cake walk because people will be begging him lead the nation. Here’s how he tried explaining that to a group of people who laughed when he outlined his intentions: “When I run for president in 2024 we would have created so many jobs I’m not going to run, I’m going to walk.” Kanye is a clothing and shoe designer, so this is where that “job creation” theme is probably coming from, but he didn’t reveal exactly how he plans on reducing the unemployment rate.

As shocking as this may or may not be for you, this isn’t the first time Kanye’s tossed around the idea of being our next president. In 2015, he got up on the VMAs stage and said 2020 would be his year. Well, it is fully 2019 and that remains to be seen.

At the time, his wife Kim Kardashian West said she had no clue that he would announce his candidacy, but did say, “I believe he is serious. I know that if he puts his mind to something, he’ll do his best.”

Kim also said, “I think it would be so much fun to be in the White House.”

In 2018, after Kanye visited Donald Trump in Washington D.C., Kim said Kanye actually doesn’t know a thing about politics. She said, “I feel like he’s very misunderstood and the worst communicator…He’s very not political, actually, he just happens to like Donald Trump’s personality, but doesn’t know about the politics.” 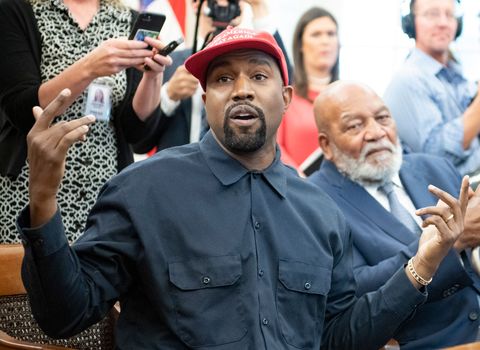 And when Kanye spoke with Zane Lowe in October, he said he’s “working on some things right now” related to the next election. He added, “There will be a time when I will be president of the U.S. and I will remember…any founder that didn’t have the capacity to understand culturally what we’re doing.” Okay, whatever that means!

Yeah, Kanye’s said a lot of things about running for president and didn’t follow through the first time, so don’t go placing any bets for 2024. Let’s just focus on getting through 2020!