Despite their rocky relationships, the cast of the ’90s hit ‘Saved By The Bell’ came together to pay homage to their co-star, Dustin Diamond, after the news of his passing.

He was best known for playing the lovable nerd Samuel “Screech” Powers on the hit NBC sitcom Saved by the Bell in the ’90s, but sadly, Dustin Diamond died at the age of 44 after a battle with stage 4 small cell carcinoma, also known as lung cancer. Shortly after the news broke, his fellow Saved By The Bell co-stars came forward with their dedications to Dustin, which you can see below.

Lark Voorhies played fashionista Lisa Marie Turtle on Saved by the Bell, whom Screech had a crush on throughout most of the show. A day after the heartbreaking news of Dustin’s death broke, Lark shared a throwback photo of their characters. “Words cannot express the grief that I am feeling right now,” she began her caption. “Dustin and I had a warm and special friendship, he was a caring gentleman, and my memories of him will always be cherished. I am so very sorry he is gone. But it’s exceptionally sad for his close loved ones who have do deal with his tragic death and their own great loss. My heart goes out to them at this trying time.” 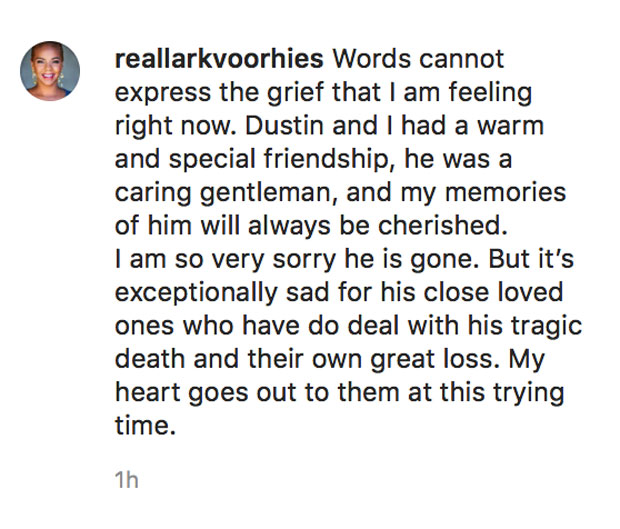 “Dustin, you will be missed my man. The fragility of this life is something never to be taken for granted. Prayers for your family will continue on,” the actor wrote, along with a photo of the pair. Later that evening, during the Feb. 1 episode of Access Hollywood, Mario further said, “He was like a little brother to me. We always remained in contact over the years, and I actually just spoke with him a couple of weeks ago after he got his diagnosis. Even then, he was full of energy, and he was optimistic.”

Tiffani Thiessen also tweeted her tribute to Dusting. “I am deeply saddened by I the news of my old co-star [Dustin Diamond’s] passing. Life is extremely fragile and it’s something we should never take for granted. God speed Dustin,” she wrote, along with a link to her Instagram post with the same message and a photo of the late star.

Mark-Paul Gosselaar remembered Dustin as well, sharing the following message on Twitter: “Deeply saddened to hear of the passing of Dustin Diamond, a true comedic genius. My sincere condolences to his family and friends. Looking back at our time working together, I will miss those raw, brilliant sparks that only he was able to produce. A pie in your face, my comrade.”

The news was confirmed by his reps during the afternoon of February 1st, with the team releasing the following statement: “We are saddened to confirm of Dustin Diamond’s passing on Monday, February 1st, 2021 due to carcinoma. He was diagnosed with this brutal, relentless form of malignant cancer only three weeks ago. In that time, it managed to spread rapidly throughout his system; the only mercy it exhibited was its sharp and swift execution. Dustin did not suffer. He did not have to lie submerged in pain. For that, we are grateful.”

Elizabeth Berkley looked back at her time playing Jessie Spano alongside Dustin’s Screech by sharing throwback photos from Saved by the Bell. One showed Screech with his robot, “Kevin,” and another featured Elizabeth and Dustin as their characters inside the hall of the fictional Bayside High School.

“I’m grateful to have gotten to create with Dustin when we were at the beginning of our dreams coming true,” Elizabeth wrote underneath the sentimental photos, adding, “I will hold onto those sweet memories and the laughs we shared. Rest In Peace.” 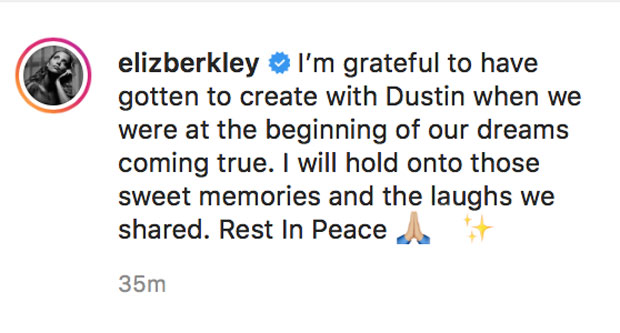 The same year that she starred as Donna Martin in Beverly Hills, 90210, actress Tori Spelling appeared in three episodes of Saved By The Bell in 1990. Tori reflected on her time with Dustin in a February 1 Instagram post. “My 1st onscreen love Dustin Diamond got his Angel wings today,” she began the caption to her photo, which featured a black and white image of the two stars on set. 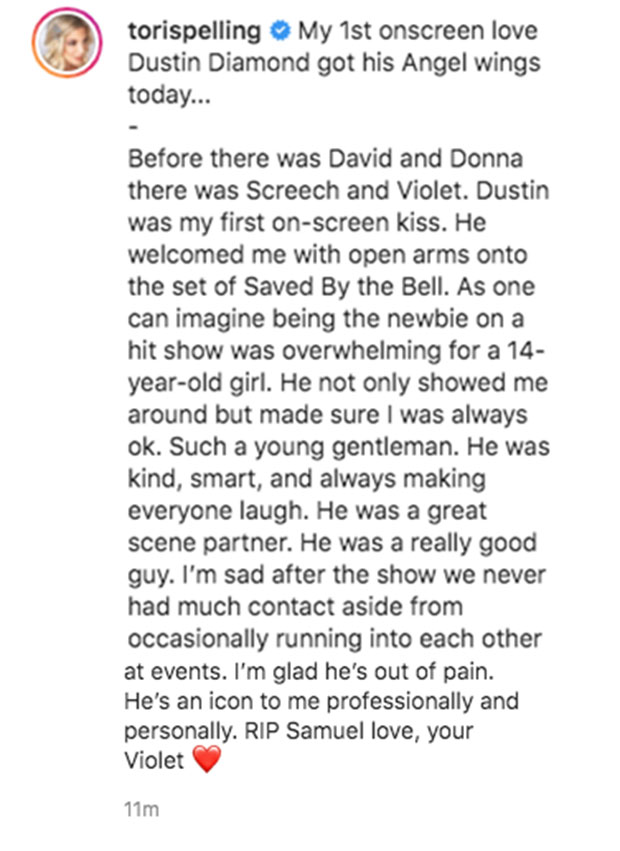 “Before there was David and Donna there was Screech and Violet. Dustin was my first onscreen kiss. He welcomed me with open arms onto the set of Saved By the Bell. As one can imagine being the newbie on a hit show was overwhelming for a 14 year old girl. He not only showed me around but made sure I was always ok. Such a young gentleman. He was kind, smart, and always making everyone laugh. He was a great scene partner. He was a really good guy. I’m sad after the show we never had much contact aside from occasionally running into each other at events. I’m glad he’s out of pain. He’s an icon to me professionally and personally. RIP Samuel love, your Violet”

Dustin’s team acknowledged the actor as well as the man, and were frank about his past, but also his outlook for his future. “We are aware that Dustin is not considered reputable by most,” the statement read. “He’s had a history of mishaps, of unfortunate events. We want the public to understand that he was not intentionally malevolent. He–much like the rest of those who act out and behave poorly—had undergone a great deal of turmoil and heartache. His actions, though rebuked, stemmed from loss and the lack of knowledge on how to process that pain properly. In actuality, Dustin was a humorous and high-spirited individual whose greatest passion was to make others laugh. He was able to sense and feel other peoples’ emotions to such a length that he was able to feel them too—a strength and a flaw, all in one.”

Dustin’s former co-star, Mario Lopez, paying tribute to the late actor is particularly touching, given the difficult relationship the cast has had with the actor since the series ended. In 2016, Dustin reunited with co-star Mario for an interview on Extra, which Mario was hosting at the time. During the interview, Dustin tried to set the record straight about his 2009 memoir, Behind the Bell, which detailed allegations of hookups and drug use among his cast members.

“I can’t imagine what they think, and I’m hoping this will clear it up. It wasn’t me, I didn’t write this. I was just as shocked and appalled,” Dustin shared with Mario, referencing his ghostwriter who worked on the memoir. At the time of the interview, Dustin also observed that he hadn’t seen his co-stars since he was 16 years old. Four years after his sit-down with Mario, Dustin was the only original cast member of Saved By The Bell that did not join the NBC Peacock follow-up series.

Tags: Dustin Diamond, Saved By The B
Recent Posts