In the basement of Hill Country, a barbecue joint in the Flatiron district in Manhattan, Lester Holt, the NBC News anchor, struggled to recall the name of a musician popular in his youth. His face crumpled into a frown of concentration as he sang to himself: “Day-o, a day-o.” He shook his head softly and said, “I’ve totally run a blank here.”

Mr. Holt tried again: “Tally man, tally me banana.” He failed again. “I can’t think of his name,” he added, before returning to the chorus, “Day-o, day-o.” Suddenly his features relaxed as the name came to him. “Harry Belafonte,” he said, and took another stab at his mac ’n’ cheese.

It was late afternoon on the last Sunday in June, and all of New York City was consumed by Pride celebrations. Outside, the streets were jammed with overheated cops and underdressed revelers. 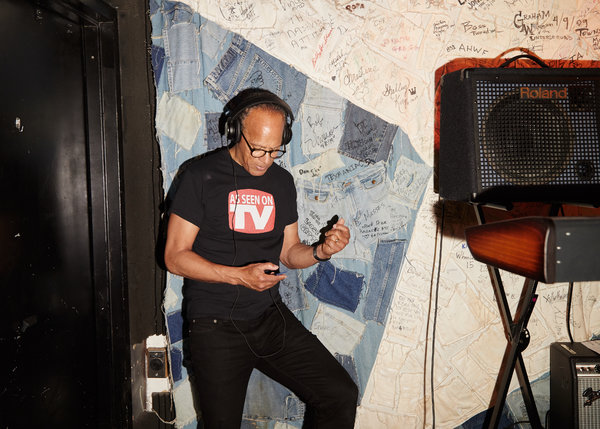 Inside, however, was a Texas wonderland scented with barbecue sauce. “A Fistful of Dollars,” the 1964 spaghetti western, was playing on TV screens. Bathrooms were designated by a cowboy and cowgirl. The beer came in Mason jars. The single nod to Pride was a small rainbow flag that dangled limply from an amp on the stage.

Mr. Holt had just returned from helping anchor the first Democratic presidential debate in Miami and was at Hill Country to play a free gig with his band the Rough Cuts, so-called because most of the musicians work day jobs as video editors on “Dateline NBC.”

“We’re all co-workers but at this moment we’re not news people, we’re just doing this thing,” Mr. Holt said. The “thing” was a rock combo specializing in covers of crowd pleasers like “Sweet Emotion,” by Aerosmith, and “So Lonely,” by the Police.

“A lot of these songs we do, I’d never heard of,” Mr. Holt said. He nodded toward the rest of the band. “The joke is that they’ve helped me discover my inner rocker.”

It turns out that newsmen who moonlight as rockers constitute a whole category. On the eve of the White House Correspondents Dinner last April, Chuck Leavell, the keyboardist for the Rolling Stones, took turns jamming with bands fronted variously by Steve Liesman, the CNBC senior economics reporter; Michael Siconolfi, a Wall Street Journal senior editor; and Tom Toles, a cartoonist for The Washington Post.

Then there’s Joe Scarborough, the MSNBC host, who put out a five-track EP, “Mystified,” in 2017. Variety suggested he was trying to sound like the “G.O.P. Lou Reed.” It’s probably safe to say that Lou Reed’s legacy will survive intact.

As he nursed his beer, Mr. Holt shared an Instagram feed for his dog, a labradoodle called Lucy with 10,000 followers, and compared notes on toilet training with the NBC publicist Dana Klinghoffer. She, too, owned a labradoodle with an Instagram account, but with only 122 followers. How many followers did Mr. Holt himself have? “I don’t know, I have to find out,” he said. It turned out to be 155,000. He shrugged. “I don’t think that’s a lot,” he said.

The lights dimmed, and a waitress made her away around the room placing votive holders on the tables. They were red and sparkly, like Judy Garland’s shoes in “The Wizard of Oz.’

For the hourlong set, Mr. Holt, who plays bass guitar, had swapped out his familiar suit for Converse sneakers and black jeans rolled up a sporting inch or two above his ankles. His T-shirt read, “As Seen on TV.”

It was the band’s fourth or fifth outing at Hill Country, and a sizable portion of the audience appeared to be employees of NBC. But not all. Skei Saulnier, who described herself as “legit Cherokee,” had brought her daughters Ella, 11, and Leai, 10, from Virginia. “I’ve been watching NBC’s ‘Nightly News’ since I was 5 or 6,” she said. “In my home, the anchors were celebrities.”

At 7:30 p.m. Mr. Holt lead the band on to the stage. “Happy Pride Day!” he said, and dove into the opening number, “Valerie,’” a song made famous by Amy Winehouse. At the microphone, Irene Trullinger, an editor on “Dateline,” belted out the lyrics with a Stevie Nicks-meets-Beth Ditto brio.

Mr. Holt’s stage style owes something to his TV style: low-key and unassuming, even during a rendition of “Psycho Killer,” by Talking Heads, a song about the contents of a killer’s mind. When David Byrne performed it in London last year, he “flung himself around to the beat as if being shot,” according to a reviewer for The Guardian. Mr. Holt took a less theatrical approach. Occasionally he tapped his left foot to the beat.

After the show wrapped, Mr. Holt’s wife, Carol Hagen, explained how she had persuaded him to include “Psycho Killer”: “He said, ‘Absolutely not, we’re not doing that artsy-fartsy music, I will not do Talking Heads.’ It took a few months.”

Behind his wife, Mr. Holt played air guitar to “I’m So Excited,” by the Pointer Sisters. At some point, he had added a fedora to his ensemble. Ms. Hagen smiled fondly. “Everyone thinks of him as this strait-laced news guy,” she said. “But’s he very multifaceted, and he has a cracking sense of humor.”

He is also a lifelong musician who caught a concert by Carmen McRae as a teenager and was instantly hooked. It has been 45 years since Mr. Holt saved enough money from a job delivering newspapers in Sacramento, where he grew up, to buy his first guitar, a knockoff Fender Jazz that cost $60 in a pawnshop.

Today the guitar sits in his office at 30 Rock, a symbol of where he started, and the distance traveled. Since joining NBC News in 2000, he has covered the Arab Spring, the Fukushima nuclear disaster and nine Olympic Games. In 2017, he secured an interview with President Trump, in which the president acknowledged that the Mueller investigation had influenced his decision to fire the F.B.I. director James Comey.

“I’m at the top of my profession,” Mr. Holt said. “There’s nowhere else to go, but I don’t want this to define who I am. If this job ever went away, I’m still me, I still have so much more to give, and doing this music thing is a symbol of that.”