John threatens to anger the Chinese movie-viewing audience when he says that ‘Taiwan is the first country that I can watch’ his new movie ‘F9’ during an interview with Taiwanese Broadcaster TVBS.

AceShowbiz –Meghan McCain came at John Cena after the actor backtracked his comment on Taiwan. On Tuesday afternoon, May 25, “The View” co-host ripped John for apologizing to China for acknowledging Taiwan as an independent country.

It started after a Twitter user shared a video of John’s apology in Chinese on Sina Weibo after calling Taiwan a country during an interview promoting “F9“. In response to that, Meghan wrote, “You absolutely spineless, chickens**t, pathetic coward.” 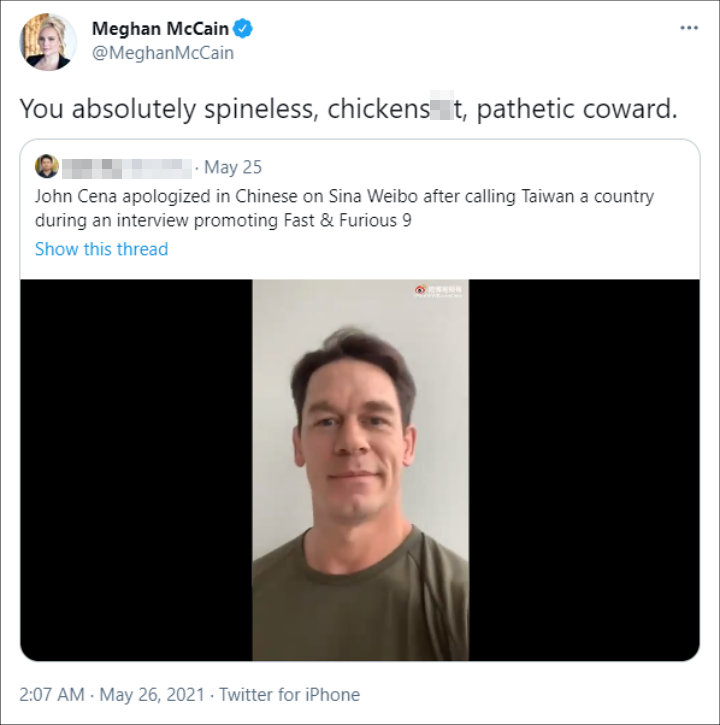 Meghan is among those who criticized John for turning his back on Taiwan people out of fear of upsetting the Chinese public. “Taiwan is a country. Hong Kong should be free. If you are unwilling to say these things because it might hurt your bottom line, you are a pathetic coward,” tweeted Ben Shapiro.

Meanwhile, U.S. Senator Tom Cotton called the former WWE star “pathetic.” Keith Olbermann said, “How shameful, Cena. Taiwan is a country – and a democracy. You just apologized to a dictatorship.”

CNN anchor Jim Sciutto tweeted, “Why not call a decades-long healthy and functioning democracy a country? Because much of Hollywood operates in fear of Beijing, many of its blockbuster movies dependent on the mainland Chinese market.”

John threatened to anger the Chinese movie-viewing audience when he said that “Taiwan is the first country that I can watch” the new movie “F9” during an interview with Taiwanese Broadcaster TVBS. He then quickly apologized in Mandarin as referring to Taiwan, a self-ruled democratic island, as a separate entity is considered an offense in China.