Ozzy Osbourne has revealed that he’s been forced to postpone his European tour once again, as he continues to grapple with the aftermath of a ‘bad fall’.

In a video shared on his social media accounts, the 70-year-old rocker insisted that he was ‘not dying’, though he was ‘bored stiff’ after being placed on doctor ordered bed rest following the accident, which ‘screwed up all the vertebrae’ in his neck.

In the expletive-laden clip, the Birmingham native said after announcing the postponement of No More Tours 2: ‘I’m not dying; I am recovering. It’s just taking a little bit longer than everyone thought it would.’ 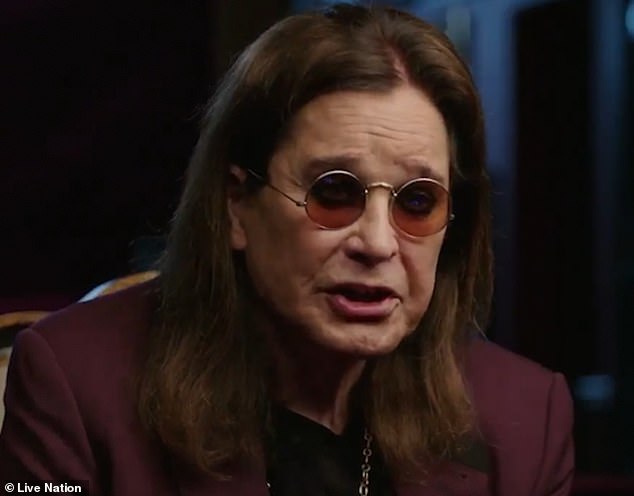 Postponed: Ozzy Osbourne has revealed that he’s been forced to postpone his European tour once again, as he continues to grapple with the aftermath of a ‘bad fall’

Over the past several months, the erstwhile Black Sabbath star has been in and out of hospital after the fall left him requiring extensive surgery on his spine and neck.

He also battled pneumonia, flu complications and infections in his hand, prompting much speculation over his long-term health.

However, in his video, the former Osbournes star revealed that he was ‘bored stiff’ of spending his days in bed, but added, ‘You’re just gonna have to be a little bit more patient. I’m postponing the European tour because I’m not ready. 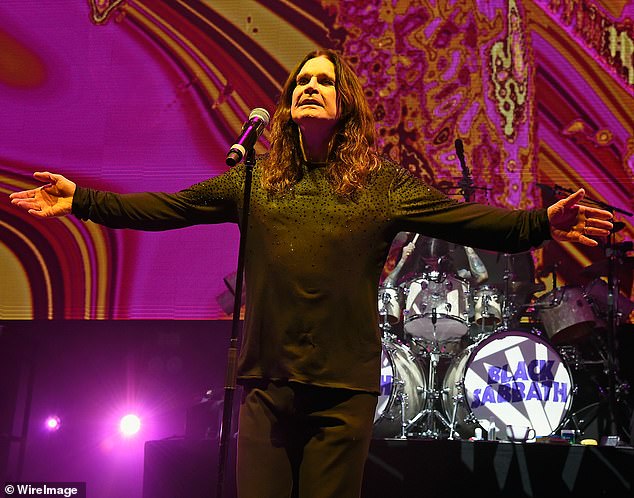 Tour: The rescheduled tour dates were set to commence in January 2020. Pictured in 2016

‘I’m not retiring – I’ve still got gigs to do. But when I do come back on an American tour, I wanna be one hundred per cent ready to come out and knock your f***ing socks off.’

The European leg of Ozzy’s tour was rescheduled to kick off in January 2020. No replacement date has been announced.

His rescheduled North American dates, which start in May 2020, are set to go ahead as planned, according to Live Nation.

Last month, Ozzy deemed his wife Sharon a ‘god’ for taking him back after his affair. 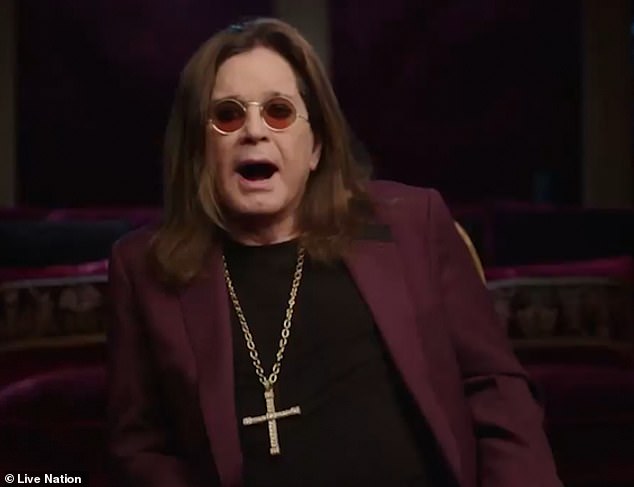 Alive: In a video shared on his social media accounts, the 70-year-old rocker insisted that he was ‘not dying’, though he was ‘bored stiff’ after being placed on doctor ordered bed rest 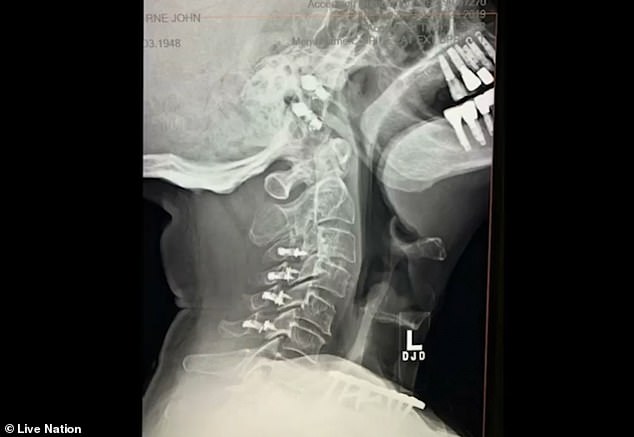 Injuries: The British star revealed that the accident ‘screwed up all the vertebrae’ in his neck

The rocker cheated on his wife of 37 years in 2016, when he embarked a six-month fling with hairdresser Michelle Pugh, but Ozzy says Sharon, 66, has forgiven him and they have never been closer.

In an interview with The Sun, he said: ‘Sharon and I have never been as close as we are now. It’s great. Sharon has been a god.

He said: ‘We all make mistakes. I’m lucky she took me back. Sometimes I sit there and go, ‘What the f*** was I thinking?’ I won’t understand why it happened until the day I die.’

Sharon claimed in an interview with The Telegraph in 2017 that there were several women Ozzy cheated on her with. 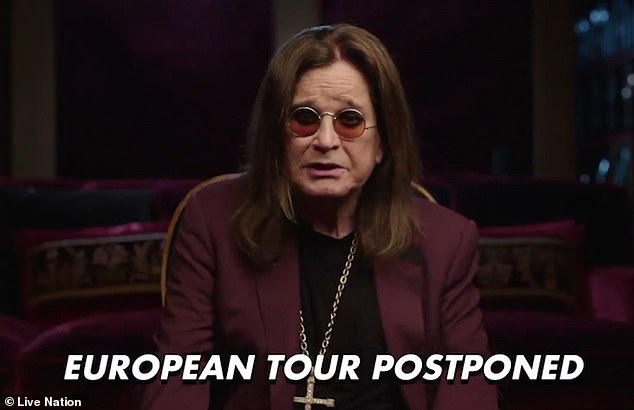 Recovery: In the expletive-laden clip, the musician said after announcing the postponement of No More Tours 2, ‘[My recovery is] taking a little bit longer than everyone thought it would’ 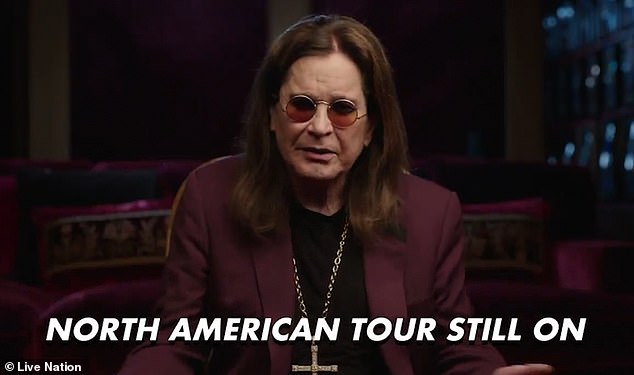 USA: His rescheduled North American tour dates, set for May 2020, will go ahead as planned

She said: ‘There were six of them: some Russian teenager, then a masseuse in England, our masseuse out here, and then our cook.’

Firing off a stark warning to other females, she stated: ‘He had women in different countries. Basically, if you’re a woman giving Ozzy either a back rub or a trolley of food, God help you.

The X Factor judge said she was in shock when she found out about Ozzy’s reported four-year fling with hairdresser Michelle Pugh, 48, who called the singer ‘the love of my life’.

She said: ‘When I found out about the hairdresser, I couldn’t believe it. Because none of these women were show ponies; he was doing it to fill the void in some way.’ 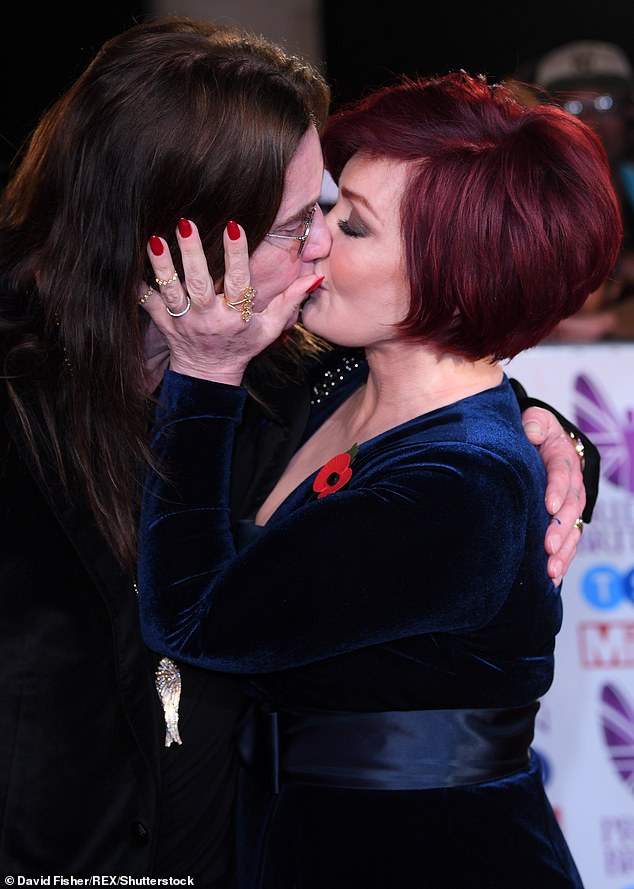 Regret: Ozzy’s video statement comes weeks after he deemed his wife Sharon Osbourne a ‘god’ for taking him back after his affair in 2016 (pictured together in October 2017)

Celebrity hair stylist Michelle was thrust into the spotlight when her affair with Ozzy was revealed and she told People at the time: ‘When I say he gave me the greatest love of my life, I mean it.’

Ozzy said that it was a purely physical relationship that came as a result of his sex addiction, which he eventually went into ‘intense therapy’ for.

Pugh claimed the star was ‘unhappy’ in his marriage and ‘consistently and willingly and generously’ gave her his love.

Ozzy’s outspoken wife, who famously labelled him a ‘big dirty dog’ when she uncovered the infidelity, also revealed she found out about his cheating when he accidentally sent her an email intended for a mistress. 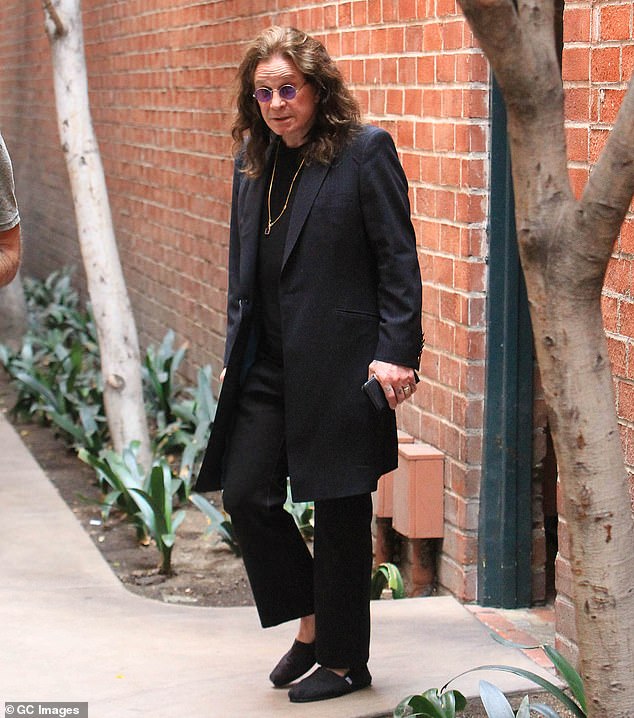 Unfaithful: The rocker (pictured in November 2017) cheated on his wife of 37 years in 2016, when he enjoyed a six-month fling with hairdresser Michelle Pugh

Sharon and Ozzy have three children together: Kelly, Jack, and Aimee.

Ozzy’s first marriage, which was to Thelma Riley, produced two children, Jessica and Louis, and he also adopted Thelma’s son, Elliot Kingsley, from a previous marriage.

Sharon met Ozzy when she was 18, whilst working for her father, Don Arden, who was managing Black Sabbath at the time.

The frontman was ultimately sacked from the band in 1979, after which Sharon took him on as a solo client and began to date him on the side. 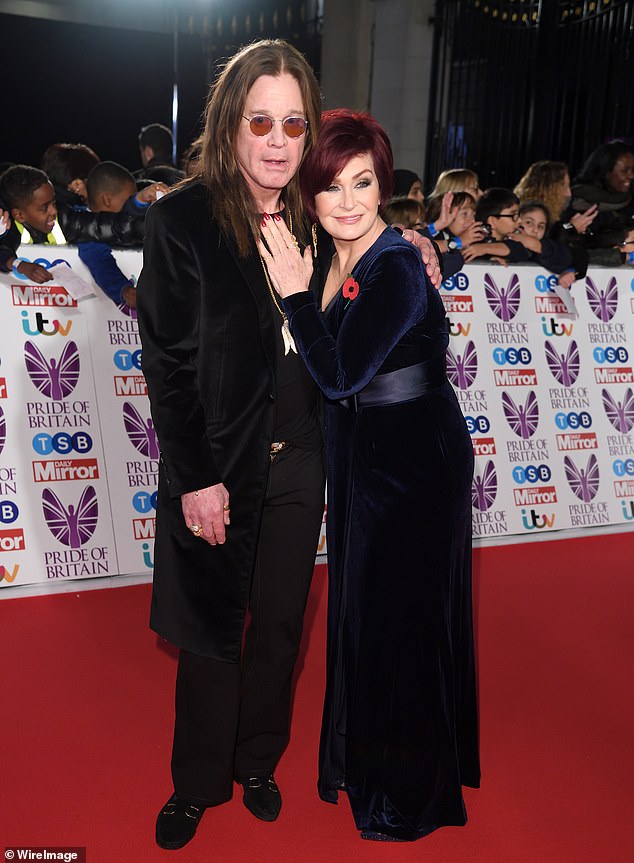 Tough: The rocker spoke about his infidelity two years ago in Rolling Stone magazine, saying he was ‘lucky’ Sharon didn’t walk out on him

Tags: Health, Osbourne&apos;s, Ozzy, Wo
Recent Posts
We and our partners use cookies on this site to improve our service, perform analytics, personalize advertising, measure advertising performance, and remember website preferences.Ok