The couple happily shared the big announcement on their social media on Tuesday, bringing plenty of congratulatory messages their way.

The mixed martial arts star is coming off back-to-back losses in the Octagon but has achieved a win with an engagement ring.

On Tuesday, Alessa Quizon and Max Holloway shared a series of photos on their Instagram profiles showing off the proposal and acceptance.

On her IG post’s caption, Alessa wrote, “with all my heart, yes. Yes to forever with you and Rush🤍❤️ @blessedmma.”

Rush refers to Holloway’s seven-year-old son from his previous marriage to Kaimana Pa’aluhi. The couple divorced in 2012.

The 28-year-old Holloway shared the same set of photos on his IG profile, which has over two million followers. That brought several celebs and sports stars to congratulate him on the announcement.

“I’m in TEARS !!!!!!!! I love you guys! So so so couldn’t be more happy for this!!!!!!” champion pro surfer Kelia Moniz Termini commented on Holloway’s post.

Max also shared the news to his Twitter account, bringing in a lot of congratulations there too.

Based on recent reports, it’s believed the UFC star and pro surfer began their relationship back in February of this year.

Alessa shared a photo of the two posing on rocks in front of a beautiful waterfall. She captioned the post with a heart emoji. 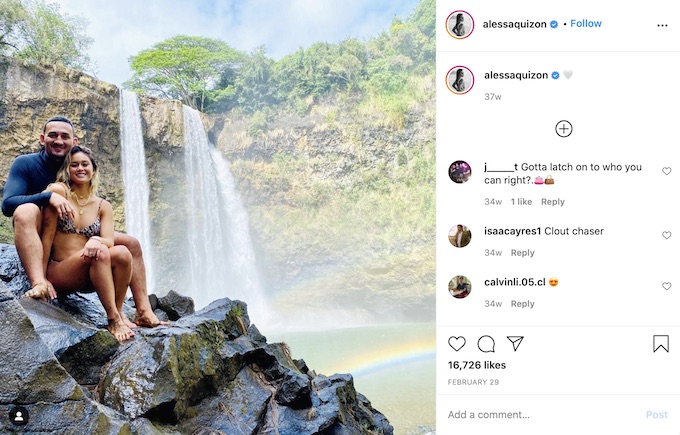 The 26-year-old Alessa Quizon is a native of Oahu, Hawaii, and ranked No. 83 on the Women’s Qualifying Series for surfing in 2020.

The Hawaiian pro surfer was previously engaged to Brazilian CT-surfer Caio Ibelli. However, that is believed to have ended around October or late 2019, per Stab Mag’s report.

Holloway has been sharing photos on his IG of his relationship since around April. Earlier this month, he showed off he, Alessa, and Rush in their Halloween costumes.

As mentioned, the former UFC featherweight champ Holloway was previously married and brought his son Rush to the new relationship.

Rush has been seen cage-side for many of Max’s fights, including one loss, which brought the young boy to tears. Holloway called it a special moment to help his boy mature and see his father suffer a loss.

Holloway is also coming off back-to-back losses in the Octagon to Alexander Volkanovski.

However, the MMA fighter may get a chance to bounce back with a fight against Calvin Kattar, tentatively scheduled for UFC Fight Night 186 in January 2021.

It’s unknown when Alessa Quizon and Max Holloway plan to tie the knot as of this writing, but it appears both are super happy as they look towards 2021.