With the last season of Selling Sunset bursting with drama, fans of the Netflix series are counting down the weeks until series six lands next year.

And star of the show Chrishell Stause tells us that we can expect even more shocking scenes when the new series finally hits our screens.

“We just started filming and they definitely enjoy stirring the pot so unfortunately there is going to be some drama that gives me anxiety!” she tells us as we catch up over Zoom from her home in LA.

Fans of the show will know that the ladies’ fashion is as big a part of the show as the real estate, and having just launched her second collection with Lipsy London, Chrishell tells us we’ll be able spy some of the outfits in the next series.

Something else we’ll be hoping to see is the actress’ new relationship with Australian singer and rapper G Flip, which was confirmed in May.

And while questions about the pair’s romance are off limits, Chrishell does tell us how things are between herself and her former partner – and boss – Jason Oppenheim.

“I think we’re both really proud of where we’ve ended up and we just try to keep that respect there at all times, and it’s not easy but I have to give us both a lot of credit for feeling like we really care about each,” she says of her co-star, who she split from in December last year.

Here, Chrishell talks to us about what we can expect from the next series of the hit show, why she is trying her hand at fashion and her unusual friendship with two UK reality stars…

Hi, Chrishell! What can we expect from the new series of Selling Sunset?

Oh gosh! We just started filming and they definitely enjoy stirring the pot so unfortunately there is going to be some drama that gives me anxiety!

But I’m hoping people can focus on some of these incredible houses and fun clients and also the sisterhood that we’ve all genuinely formed.

But when you add new cast members and new people to the office of course that’s going to change things and I’m sure that’s exactly what the show is wanting.

We thought maybe there would be less drama without Christine Quinn! Has it been strange filming without her?

No I wouldn’t say it has, she wasn’t really working in real estate for a long time before so it didn’t change much.

How are things with Jason? It seems like you have a good friendship…

Yes I think that’s something we’re both very proud of and we worked really hard to keep intact and it was a process but I think we’re both really proud of where we’ve ended up and we just try to keep that respect there at all times, and it’s not easy but I have to give us both a lot of credit for feeling like we really care about each and wanting to ensure that that comes through in how we communicate.

Have you met his new girlfriend Marie-Lou Nurk?

I have met her yes, but we haven’t hung out. We’ve been filming a lot and I think they’re in Berlin right now so I haven’t really hung out with them.

Are we going to see any celebrities looking for homes during the next series?

I’m hoping to bring a big fish client that’s willing to film. That’s always the hardest part. I’m hoping that the answer to that will be yes. You have to get everyone’s team on it and to agree everything. A lot of things have to be signed so I’m really hoping to get that worked out!

That’s exciting! Does there feel like a real pressure to step it up with your fashion when you’re filming?

100%! We definitely dial it up when we’re filming. I don’t run to meet clients every single time in 15-inch heels and a completely shoe and bag coordinated outfit with hair and glam!

If I’m not filming I’m doing my hair and make-up myself and I’m going to be in shoes I know I can be in all day. We want to entertain people and give them that eye candy with the homes and with the clothes.

When people are having fun with it and pushing the boundaries it’s fun to see what everyone comes wearing. That’s one of the most fun parts of the days when we’re all in the office together. Everyone brings it.

Is there any competitiveness with the other girls about your outfits?

I don’t think there is on my part but I’m not saying that means that there isn’t!

I know some brands will send the girls some of the same stuff and sometimes someone will show up wearing it and then someone else is like, “Ah I was going to wear that tomorrow!” That’s happened a few times.

You’ve just launched your second collection with Lipsy. Are we going to see some of the outfits on the show?

Absolutely. When we film you never know what scenes will get shown. Sometimes you film for ages and it doesn’t get shown, but I’ve already worn several of the pieces during filming so I think you’ll see some of the pieces pop up as they’re perfect.

A lot of these pieces can be taken from business to night. I was joking that any of these pieces could be worn in our office. I’ve seen crazier things be worn and our office is a little crazy! But these are at prices people can actually afford.

Some of the things we’re wearing on the show are ridiculous, so I love that this is a mix of the designer look but it doesn’t have to break the bank.

What was your inspiration behind the collection?

It’s perfect for day to night and I’m so excited about how everything came together.

There’s such an element of sophistication plus playfulness which is very much my personality, so to feel like it really encompasses my personality makes me really proud.

I definitely love when something makes you feel sexy but yet still want to stay sophisticated and have that element of fun.

Those are three words I look for when I’m getting dress and this definitely embodies that. I think the houndstooth coat is such a star of the collection. It’s so chic!

We saw you take part in Celebrity Karaoke Club. Are there any other UK reality shows you’d love to try?

I would do every single one if I could! I love being in the UK. I was really sad to not be able to do one recently as the timings didn’t work out. I can say it wasn’t Strictly. I hope they keep asking me as if I can do it I will!

I love Pete. I don’t know Sam as well but we almost did a show together a long time ago and that’s how I met him.

When I was here for Karaoke Club I got to meet with Pete in person and he’s just so funny. He makes me laugh and he’s such a character.

I’ll be in back in London for my Lipsy launch party in November and he’ll definitely be on the invite list. Maybe I can get Sam to wear one of the dresses? I am actually going to do that! He’s so funny. 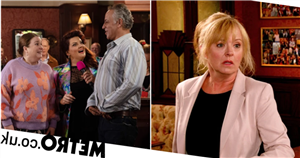