WandaVision has seen the MCU come back with a bang after taking 2020 off. In addition to the week-by-week speculation of what’s really going on in Westview, the Disney+ series could be shedding new light on already-released Marvel movies.

Spider-Man: Far From Home was the last MCU movie to be released, but as we discovered in WandaVision‘s fourth episode (the one with that Blip opening), WandaVision actually takes place before Far From Home in the MCU timeline.

Far From Home is set eight months after the events of Avengers: Endgame, whereas WandaVision is only three weeks and a bit after Endgame. This has led one Marvel fan on Reddit to view a Far From Home conversation in a different light.

When Peter Parker first meets Mysterio, he’s reluctant to help battle the Elementals when asked by Nick Fury. Peter reels off a list of stronger superheroes like Thor and Captain Marvel to help instead and there’s a key name in there: Doctor Strange.

Peter’s told by Maria Hill that Doctor Strange is “unavailable” and it’s now speculated that the reason for that is that he can’t help because “he is already traveling the Multiverse of Madness”, according to the theory.

We know that WandaVision will directly set up Doctor Strange in the Multiverse of Madness and that Wanda will appear in the sequel.

It’s widely assumed that whatever is happening in Westview will bring the multiverse into the MCU (if it hasn’t already) and that Doctor Strange will be trying to fix things in the sequel.

So even though this is based on speculation so far, it certainly all fits together that Doctor Strange could already be dealing in multiverse shenanigans at the time of Far From Home.

It could even explain why they’re so sold on Mysterio’s fake origin of coming from a different world, since they already know by this point that the multiverse existed. Maybe Quentin Beck even used the events of WandaVision to his advantage to create his story. 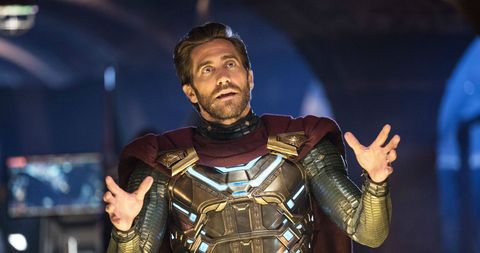 One spanner in the works is that it’s not actually Maria Hill who tells Peter that Doctor Strange is “unavailable”—it’s really Soren in disguise, along with Talos pretending to be Nick Fury.

They could have just been making up Doctor Strange’s absence since they don’t actually know anything.

But just because they might not know everything that Nick Fury would, that doesn’t mean they aren’t aware of the bigger picture. Fury might even have told them the state of play when he decided to take his little vacation in space.

It might seem unlikely that a movie released in July 2019 would have a reference to a series that is only just being released. However, WandaVision was confirmed in January 2019 so there’s every chance they knew the wider picture.

This is Marvel we’re talking about, where interconnected stories are their bread and butter, so a nod that only makes sense in a later TV show makes total sense to us.