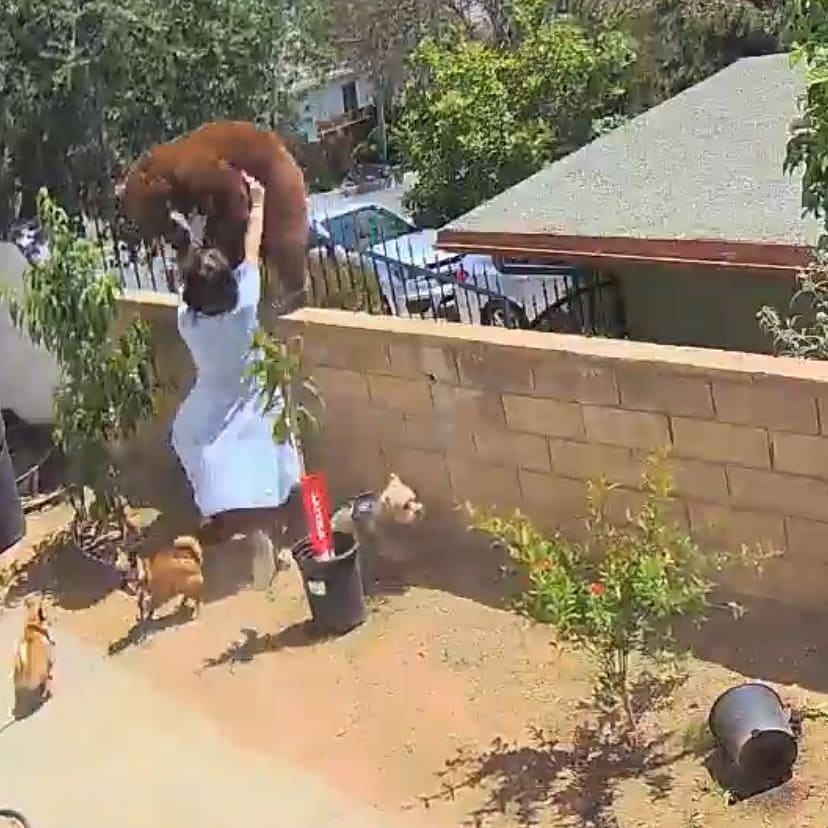 I’ve been off Twitter for a few days to avoid spoilers, so I missed this story but now that I’ve seen it, my gawd – I am cycling through emotions on loop. Apparently, this video went viral on Monday night, and I warn you, it’s not for the faint of heart. No people or animals actually get hurt, but that doesn’t mean your heart won’t end up in your throat:

The young lady in the video is Hailey Morinico and she is just 17 years old. Her cousin, Brenda Lopez Rincon, is the one who posted the video to Instagram. If you can’t bring yourself to watch it, a mother bear walks along that back wall with two babies trailing behind her. Four dogs, one medium and three small, come out to bark at the bear. The cubs are successfully removed from the wall, but the mother starts swiping at the dogs. That’s when Hailey runs out to get the dogs away. The mother bear snags the harness of a terrier and Hailey, as she’s shooing dogs, reaches over and pushes the bear off the wall! Fortunately the terrier was released, the dogs are smart enough to get the hell inside and the bear sees her chance to vacate. Everyone retreats unharmed. And this is in California. I shouldn’t be surprised, we’ve had bear incidents here in LA, but I still am.

Apparently, the whole incident shook everyone up, which is totally understandable. Hailey said she saw her dogs in trouble, and went into autopilot. She said didn’t really have a plan and if she had, it certainly wouldn’t have been to push a bear.

Morinico said she heard her dogs barking, which was not unusual.

“I go to tell them to stop and when I go over there to see what they’re barking at, I’m like, That’s a funny-looking dog,” she joked.

She said the bear was picking up one of her smaller dogs by the time she realized what was happening.

“I go over to the bear, I look it in the eyes, and the first thing I think to do is push it. Push a bear. Push an apex predator,” she said, adding that she didn’t shove it too hard, but just enough so that it lost its balance.

The only injury Morinico sustained was a scraped knee and a sprained finger.

When I saw the cubs enter the scene, I went cold. The mom bear probably would’ve shrugged off the dogs on her own but the minute she saw a danger to her cubs, that’s trouble. I’m no bear expert but my brother and sister-in-law live in Fairbanks, Alaska and I’ve heard stories, many of which end with, “and that’s when they saw the cubs hiding nearby.” I realize Hailey didn’t intend to push a bear that day, but it looked like the best option given the number of times I’ve watched this. I definitely understand the “not thinking” part of her story. I’m terrible in danger scenarios. My six month old Pomeranian broke into my neighbor’s yard a few weeks after we’d adopted him. I heard him screaming when the neighbors Akita/German Shepard mix found him. My jerk neighbor refused to come out of the house to help so I, too, went on autopilot, scaled the six-foot, chain-link fence and placed myself between my puppy and her dog. Oh, did I mention I was six months pregnant at the time? Yeah, just a pile of stupid choices. Fortunately, everyone got out okay then as well (let’s face it, if her dog wanted mine dead, he would’ve been by the time I’d gotten there.)

I tried to look up what you are supposed to do in Hailey’s case and I couldn’t find anything. All the articles I found discuss dogs in the bear’s territory, like while hiking and such (you should still know those precautions). Honestly, I applaud Hailey. I’m sure an animal activist will tell me why this is all wrong, but she made a decision that saved four dogs, two cubs and a mom bear and it only earned her a sprained finger in the process.

By the way, the little terrier in the video is a service dog named Valentia. Hailey’s mom posted a pic of her that night. Poor thing probably need a day at the doggie spa when it was all over.

Here’s Hailey in her own words: 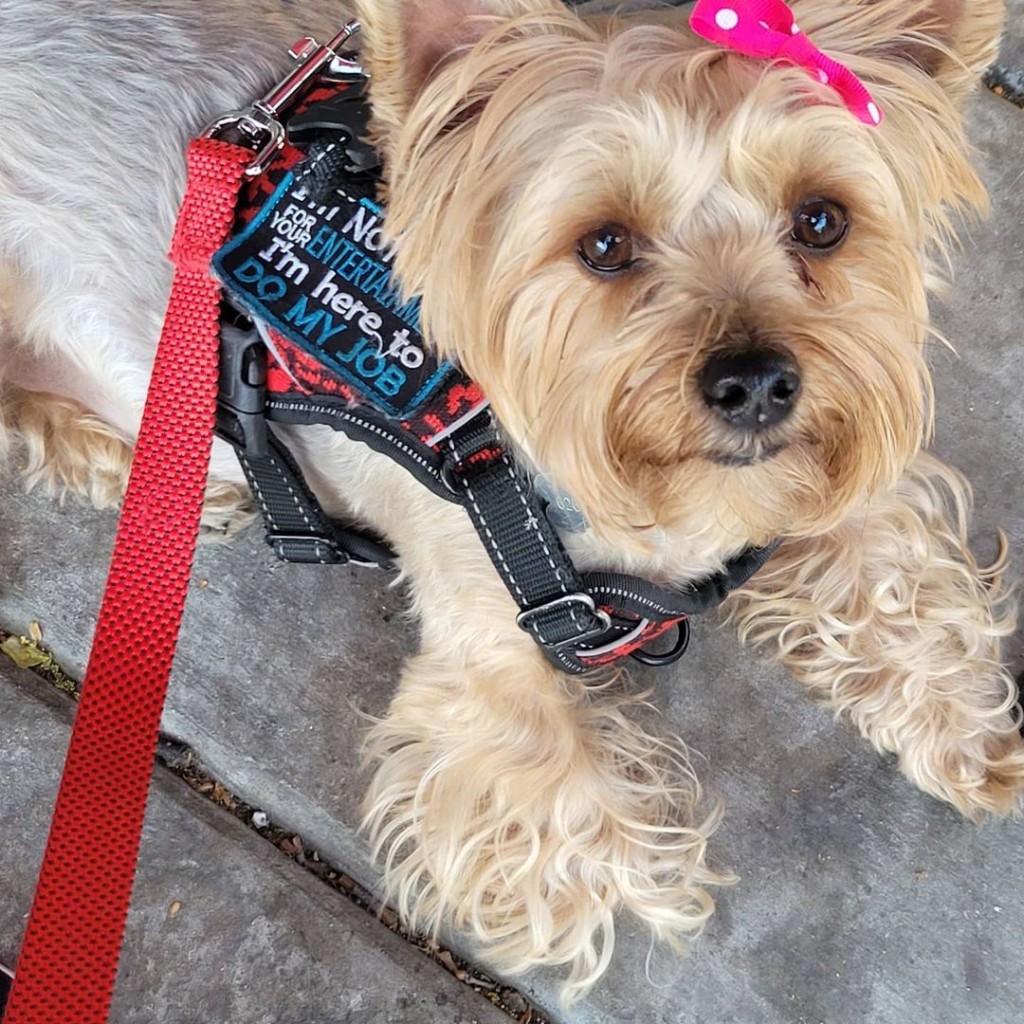