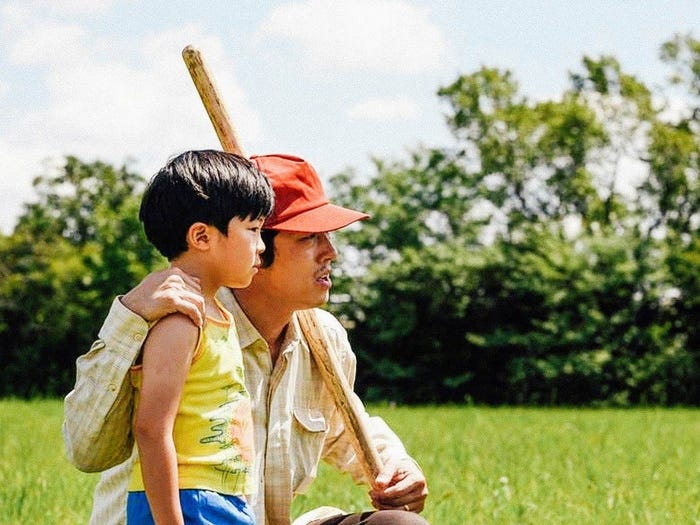 The Golden Globes are facing an intense backlash against their recent announcement that "Minari" will not be allowed in either of the best picture categories in their awards because it is being classed as a "foreign language film" by the Hollywood Foreign Press Association (HFPA, which conducts the Globes).

The news, first reported by Variety, has sparked a wave of criticism from prominent filmmakers and celebrities, who feel the movie is being given hypocritical and even racist treatment. "Minari" is spoken predominantly in Korean, meaning it does not meet the HFPA guidelines that state at least 50 percent of a movie's dialogue must be in English to compete in the Globes' best picture categories.

However, as some critics have pointed out, the movie is set in America, deals with American themes, and is produced and made by Americans.

Insider has reached out to the HFPA for comment.

The HFPA's decision follows its precedent set last year with Lulu Wang's "The Farewell," which was predominantly set in China and predominantly spoken in Mandarin, but American studios and filmmakers were behind the project and the film itself also dealt with a lot of timely American themes. It was, like "Minari" though, placed in the foreign language film category.

Wang criticized the decision against her movie last year, and again leads the charge against the Golden Globes after giving "Minari" the same treatment as her movie.

Wang tweeted: "I have not seen a more American film than 'Minari' this year. It's a story about an immigrant family, in America, pursuing the American dream. We really need to change these antiquated rules that characterizes American as only English-speaking."

Wang is joined in her critique of the HFPA by several prominent filmmakers, including "Shang-Chi and the Legend of the Ten Rings" actor Simu Liu. Liu, who will play Shang-Chi himself in the MCU movie, tweeted: "Just for the record, Minari is an American movie written and directed by an American filmmaker set in America with an American lead actor and produced by an American production company."

Liu also added: "Without spoiling anything it is a BEAUTIFUL story of an immigrant family trying to build a life from the ground up. What could be more American than that?"

Meanwhile, IndieWire film critic David Ehrlich tweeted: "An intrinsically American film about people in America navigating what it means to be American while surrounded by a bunch of other Americans in real deep America. But far be it for me to question a sacred institution that's about to nominate 'THE PROM' for Best Picture."

Korean–American actor Daniel Dae Kim ("Hawaii Five-O," "Lost") tweeted that this decision feels like "the film equivalent of being told to go back to your country when that country is actually America."

The HFPA's decision has also been called out for hypocrisy as movies such as "Inglourious Basterds" and "Babel" were nominated for best picture (the latter even won) even though they were largely spoken in languages other than English, too.

Actor and filmmaker Eugene Lee Yang expanded on this, writing: "Hollywood gets picky about Korean-Americans speaking Korean on an Arkansas farm but has nothing to say about the countless movies set in non-English speaking countries where the characters… all speak English… with an accent."

"Candyman" director Nia DaCosta tweeted, "Minari" is "a true gem of American cinema," that is intrinsically an American movie. DaCosta, who labelled HFPA's decision as "bulls—," tweeted: "I'm a first-generation American born and raised in New York City and @MinariMovie, a film about a Korean American family searching for the mercurial and multi-faceted American Dream in rural Arkansas, made me feel seen in a way movies rarely do."

And "The Mandalorian" actress Ming-Na Wen tweeted that the movie "is as American as it gets."

She tweeted: "This pisses me off on so many levels. STOP THIS STUPIDITY!! A film like #Minari is as American as it gets!!!" Fix this, #GoldenGlobes. Especially in 2020."

Last year, Ava DuVernay criticized the Academy Awards for deciding that a Nigerian movie was ineligible from their best international feature because it was spoken in English. Wang commented on the issue, then, writing: "This calls attention to the delineation of 'foreign film' vs 'foreign-language film.' Which makes more sense? Can a 'foreign film' be in OUR language (i.e. English)? Can a domestic (i.e American) film be in a foreign language? What does it mean to be foreign? And to be American?"

Wang's points remain as poignant, urgent, and unanswered this year after the HFPA's "Minari" decision.

A source told Indie Wire that any movie with at least 50% of dialogue spoken in a non-English language will go into the Foreign Language category, although that rule is still confusing people as "Inglourious Basterds" had a ratio of 30:70 with English and foreign languages.

"Minari" won the Grand Jury Prize at the 2020 Sundance Film Festival and is hotly tipped to be an Oscars contender this year. It could become the second consecutive film spoken in Korean to win best picture, following "Parasite's" win last awards season. "Minari" is out in the US now on a limited release but will be widely released on February 12.