If we’re going to be honest, it’s not looking good when it comes to Tori Spelling and Dean McDermott’s marriage. The pair, who tied the knot back in 2006 after ending their respective marriages, have five children together: Liam, Stella, Hattie, Finn, and Beau. However, Spelling and McDermott’s relationship hasn’t just been filled with family bliss. Instead, these two have faced their fair share of problems, and due to some seemingly significant hints that have popped up, fans are wondering if they have broken up or are on their way toward a split.

Just consider the fact that McDermott didn’t pose for the family’s 2020 Christmas card (instead, Spelling held up his picture). He also failed to post anything on social media about his 15th wedding anniversary, and the same goes for Spelling. In fact, according to Us Weekly, as of this writing, “the [real] last sign of the actor on her Instagram account is her Father’s Day tribute in June 2020.” The buzz around potential marital problems was then stirred up again in March when Spelling spent a day out with her kids, but opted not to wear her wedding ring.

While fans might have been expecting all of that to be followed up by a separation announcement, Spelling has revealed something else about her marriage: The fact that she and her husband are now sleeping in separate bedrooms. Read on to find out why and what she thinks about the situation! 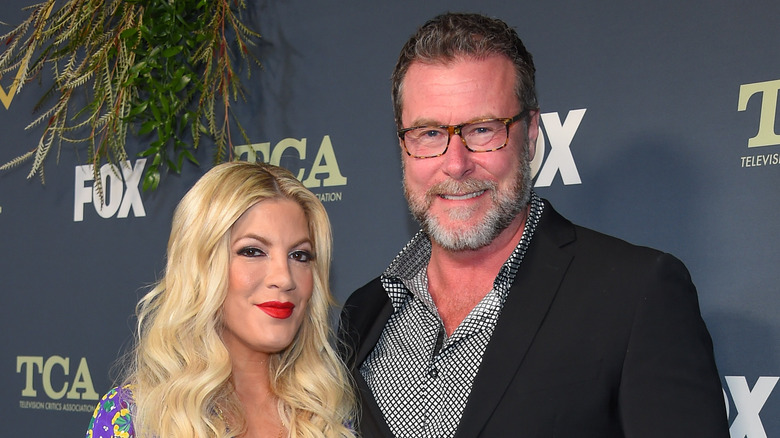 If you’re a hopeless romantic and were hoping that Tori Spelling and Dean McDermott were going to find their way back to a happily-ever-after sooner rather than later, then you might be disappointed. That’s because she revealed that she’s not currently sleeping in the same bedroom as her husband.

“What is really going on? You put the wedding ring on. Are things okay?” Jeff Lewis of “Jeff Lewis Live” (via Page Six) asked Spelling on June 16. Lewis noted that the last time Spelling had appeared on the SiriusXM program “things were good” (that included the fact that, TMI, Spelling and McDermott “were having sex”). With that, Lewis asked, “Are you guys sleeping in the same bed?”

Spelling offered a seemingly honest answer, saying, “You know what? Right now, my kids and dogs sleep in my bed.” The actor explained that her husband had been away from home due to work, adding, “Since he left — this is not good, you guys — but since he left [and] he was gone for six months filming in another country, they all stayed with me. So I currently still have four in the bedroom with me who have yet to go back to their rooms, yes.”

So, where is McDermott sleeping? “In a room,” according to Spelling. Apparently, just not hers.

Tags: and, Are, Dean, Spelling:, Tori, Why
Recent Posts