As a new year begins, our critics highlight the TV, movies, music, art and streaming dance and theater they anticipate before summer. 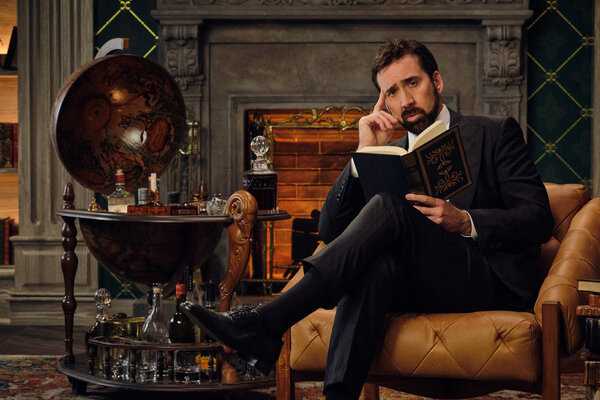 Sure, the new Netflix series “History of Swear Words,” which premieres Jan. 5, features a cast of comics like Sarah Silverman, Joel Kim Booster and Nikki Glaser working as talking heads, breaking down the meaning, impact and poetry of six major bad words, which mostly cannot be published here. An exception is “Damn,” which, you learn from this show, used to be much more taboo than it is today. And there are also some very smart academics who will explain such history, some of it hard fact sprinkled in with a few questionable legends. Etymology really can be riveting stuff. But let’s face it: The main reason to be excited about this show is the prospect of its host, Nicolas Cage, hammily shouting curses over and over again. I have seen the screeners and it lives up to expectations.

How does a songwriter hold on to honest vulnerability as her audience grows? It’s a question Julien Baker began to wrestle with when she released her first solo album, “Sprained Ankle.” She sang about trauma, addiction, self-doubt, self-invention and a quest for faith, with quietly riveting passion in bare-bones arrangements. And she quickly found listeners to hang on her every word. Through her second album, “Turn Out the Lights,” and her collaborative songs in the group boygenius (with Phoebe Bridgers and Lucy Dacus) she used better studios and drew on richer sounds but still projected intimacy. Her third album, “Little Oblivions,” is due Feb. 26. With it she scales her music up to larger spaces, backed by a full rock band with ringing guitars and forceful drums. But she doesn’t hide behind them; she’s still ruthless and unsparing, particularly about herself.

The Scarlet Witch Gets Her Due

When I heard the Scarlet Witch, also known as Wanda Maximoff, was joining the Marvel Cinematic Universe, I was hyped. Sometimes known as a daughter of Magneto (yes, we’ve got an X-Men crossover here), the powerful mutant had the ability to alter reality. So imagine my disappointment when Wanda was elbowed off to the side, shown shooting red blasts from her hands but not much else. Wanda, they did you wrong.

But I’m not just thrilled about “WandaVision” finally giving this female hero her due. The new series, which stars Elizabeth Olsen and arrives on Disney+ on Jan. 15, grants the Scarlet Witch her own universe to manipulate, and uses it as a way to toy with a fresh tone and aesthetic for the MCU. Offbeat and capricious, and a perversion of classic sitcom series, “WandaVision” seems like it will give its superheroine the space to power up and unravel in ways that she couldn’t in the overstuffed “Avengers” films. Olsen seems up to the task, and Kathryn Hahn, Paul Bettany and Randall Park are also there to provide extra comedy and pathos.

A Retrospective for Julie Mehretu

This midcareer retrospective of Julie Mehretu and her grand, roiling abstractions drew raves when it opened last year at the Los Angeles County Museum of Art, and it belatedly arrives on March 25 in the artist’s hometown, at the Whitney Museum of American Art. Mehretu came to prominence 20 years ago with dense, mural-scaled paintings whose sweeping lines suggested flight paths or architectural renderings; later, she turned to freer, more fluid mark-making that places abstract painting in the realms of migration and war, capital and climate.

Her most recent work, made during the first lockdown and seen in a thundering show at Marian Goodman Gallery, is less readily legible, more digitally conversant, and more confident than ever. To fully perceive her jostling layers of silk-screened grids, sprayed veils and calligraphic strokes of black and red requires all one’s concentration; come early, look hard.

Enough with “The Crown.” Television may have cornered the market on stories about the nobility, but it was theater that traditionally got into the heads of heads of state and tried to understand what they were thinking.

That tradition gets a timely update in February, when Steppenwolf Theater presents “Duchess! Duchess! Duchess!” — a filmed play by Vivian J.O. Barnes, directed by Weyni Mengesha. Inspired and/or appalled by the experiences of Kate Middleton and Meghan Markle, Barnes imagines a dialogue in which a Black duchess helps acculturate a Black duchess-to-be to her new position. Together, they explore what it means to join an institution that acts as if they should feel honored to be admitted, even as it eats them alive.

That the institution in question involves not just royalty but racism, if the two are different, broadens the story. How Black women negotiate power in traditionally white arenas, and at what cost, is something that resonates far beyond Balmoral.

An Alien Impersonates a Doctor

The title character of the Syfy series “Resident Alien,” which premieres on Jan. 27, does not have a green card, but he does have green skin, or at least a green-and-purple exoskeleton. He’s been sent to earth to exterminate us; there’s a delay, and in the meantime he has to impersonate a small-town Colorado doctor and learn, with exceeding awkwardness, how to act like a human being. This snowbound scary-monster comedy won’t make any Top 10 lists but it looks like a hoot, and it’s tailor-made for the eccentric comic talents of Alan Tudyk (“Doom Patrol,” “Arrested Development”), who never seems comfortable in whatever skin he’s in.

Death of a Black Panther

On Dec. 4, 1969, 14 Chicago police officers, with a search warrant for guns and explosives, raided an apartment where members of the Black Panther Party were staying. When they left, the party leaders Fred Hampton and Mark Clark were dead. Congressman Bobby Rush, who was then a deputy minister of the party, testified that Hampton, 21, was asleep in his bed when police officers shot him, a version of events investigated in “The Murder of Fred Hampton,” a 1971 documentary. Now there is a feature film about the raid. “Judas and the Black Messiah” tells the story of Hampton (Daniel Kaluuya), and William O’Neal (Lakeith Stanfield), an FBI informant who was part of Hampton’s security team, reuniting the two stars from “Get Out.” Directed by Shaka King (“Newlyweeds”), the movie is expected to be released in early 2021.

A Drama Jumps Through Time

“David Makes Man” is one of the most beautiful dramas of the last several years, and its structural daring added new facets to the coming-of-age genre. David (Akili McDowell) was in middle school in Season 1, but in the upcoming second season (currently slated for early summer on OWN) he’s in his 30s and facing adult challenges. That kind of time jump — and creative leap — would be intriguing on its own, but the way the show captured the warring thoughts within one’s adolescent psychology makes me even more excited to see how it depicts the turmoils of maturity.

Dance and the Natural World

Since the pandemic began, the robust digital programming at the Martha Graham Dance Company has stood out for its multifaceted approach of exploring the works of its groundbreaking modern choreographer. It helps, of course, to have Graham’s works to excavate in the first place. (And access to a healthy archive.)

As most dance companies continue to maintain their distance from the stage, the Graham group — now in its 95th season — opens the year with digital programming organized by theme. The January spotlight is on nature and the elements, both in Graham’s dances and in recent works. How is the natural world used metaphorically?

On Jan. 9, “Martha Matinee,” hosted by the artistic director, Janet Eilber, looks at Graham’s mysterious, ritualistic “Dark Meadow” (1946) with vintage footage of Graham herself along with the company’s recent “Dark Meadow Suite.” And on Jan. 19, the company unveils “New @ Graham,” featuring a closer look at “Canticle for Innocent Comedians” (1952), Graham’s unabashed celebration of nature, with an emphasis on the moon and the stars.

In this market you’re better off subletting! When the Frick Collection finally won approval to renovate and expand its Fifth Avenue mansion, it started hunting for temporary digs — and got a lucky break when the Metropolitan Museum of Art announced it would vacate its rental of Marcel Breuer’s Brutalist citadel three years early. Henry Clay Frick’s will bars loans from the core collection, so the Frick’s modernist pop-up, called Frick Madison, will offer the first, and probably only, new backdrop for Bellini’s mysterious “St. Francis in the Desert,” Rembrandt’s brisk “Polish Rider,” or Holbein’s dueling portraits of Thomas Cromwell and Thomas More (a must-see face-off for “Wolf Hall” fans).

But the modern architecture is only part of the adaptation; the Frick is a house museum, and the Breuer sublet allows curators a unique chance to scramble and reconstitute the collection outside a residential framework. The real UFOs at Frick Madison, expected in the first quarter of 2021, may therefore be the decorative arts: all those gilded clocks, all that Meissen porcelain, relocated from plutocratic salons into cubes of concrete.

Few new years have arrived with such weighty expectations as 2021, so to prevent disappointment let us calibrate our hopes: What I know is that in 2021 the New Zealand pop-poet Lorde has promised to put out, at the very least, a book of photographs from her recent trip to Antarctica. Titled “Going South,” it features writing by Lorde (who describes her trip as “this great white palette cleanser, a sort of celestial foyer I had to move through in order to start making the next thing”) and photographs by Harriet Were, and net proceeds from its sale will go toward a climate research scholarship fund. Cool. I love it. Of course, my true object of anticipation is Lorde’s third album, the long-awaited follow-up to her spectacularly intimate 2017 release, “Melodrama,” but after a year like 2020, I’m not going to rush her. Actually, you know what? I am. Lorde, Ella, Ms. Yelich-O’Connor: Please release your epic concept album about glaciers and spiritual rebirth at the South Pole in 2021. After a year in the Antarctic climate of the soul that was 2020, this is what we all deserve.