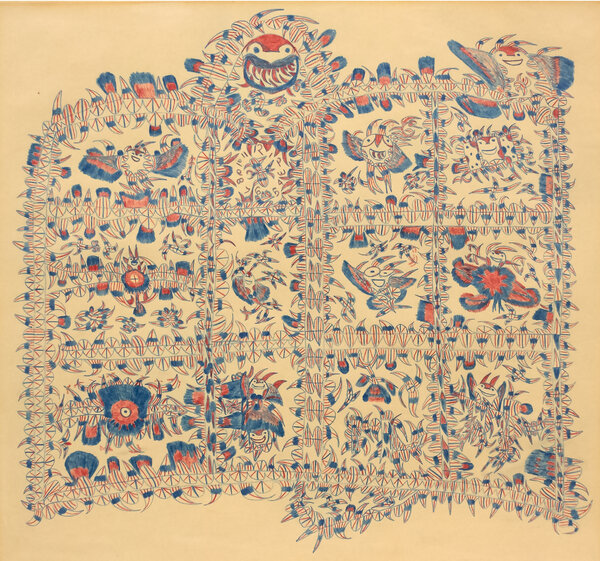 By Roberta Smith and Will Heinrich

Frank Jones, who was born in Clarksville, Texas, in 1900, spent much of his life in and out of that state’s prisons, possibly for crimes he did not commit, and died in one in 1969. During his last decade, Jones made around 500 drawings, usually on found paper, signed with his name and inmate number, 114591. He worked with the stubs of colored pencils discarded by the prison’s accountants. He was partial to red and blue, but also used combinations of purple, orange and green.

Jones’s fanciful images conjure a world rich in suggestion, association and decorative invention. He started with a loosely subdivided architectural scaffolding, often with a peaked roof or a pediment; houses, circus wagons, Mardi Gras floats and prisons come to mind. Each subdivision usually contains a splendid creature of some sort — a plumed demon or insect, or flying fish that are all ecstatically bug-eyed and grinning. Occasionally a more human presence is limned, intimating an elaborately costumed Mardi Gras celebrant. Every level of every structure is lavishly festooned, mostly with alternating sharp and rounded shapes. The sharp ones are especially versatile, conjuring leaves, feathers, fins, teeth, little banners and maybe ribbon barbed wire; they also serve the creatures as horns, wings, feet or antennae. Sometimes the repeating shapes of the borders are solidly colored, emphasizing their architectural character. Sometimes they are sparsely striped, especially with red and blue, for a more transparent profusion that resembles lace, quilts or embroidery. 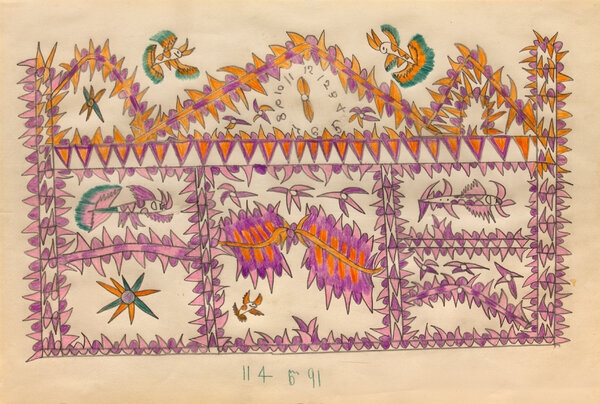 Jones was born with a caul over his eye, which is often seen as indicating the gift of second sight. This belief can be self-fulfilling: He claimed to see spirits. But his influences were probably many, ranging for example from prison life to southern textile traditions. And as is often the case with self-taught artists, Jones’s work also offers proof of the collective unconscious, as evidenced by its striking affinities with various motifs in the art of Bill Traylor, Martín Ramírez and Adolf Wölfli. Although going by this, his second solo in New York, Jones was a genius in his own right. ROBERTA SMITH

“Iowa Dreams,” the title of Serena Stevens’s New York gallery debut, combines Midwestern plainness with a slightly forlorn reverie. Her paintings follow suit, haunting everyday, mostly domestic, people-free scenes with strangeness — largely through her attention to light, paint texture and scale. Ms. Stevens is in the process of mastering a loose, somewhat photographic realism that may reflect an admiration for the paintings of Edward Hopper and Eric Fischl.

In “Rocking Chair,” the subject is spare in design, made of dark wood and seen from the back. It is caught in the coffin-like shaft of light from a tall, narrow window that counters the rocker’s foreshortened form with an elongated, tower-like shadow. Both are suspended in a brushy grayness that resembles mist. “Light Inside” might almost portray a disembodied vision, except it has just enough details to identify its central glow as that of a bathroom window filtered through a white shower curtain. The haunting is most palpable in the nocturnal “Intersection,” in which a beam of light intersects with a traffic sign to form a kind of off-kilter cross. The scene is witnessed by an invisible a stop sign whose shadow appears on a plane of gray brown that gradually defines itself as the broad trunk of a tree. The shadow is apparently cast by the traffic sign, but they don’t seem to match.

I like as much as anyone (maybe more) the colorful, wittily stylized form of figurative painting, verging on cartoonish, that is popular right now. Refreshingly, Ms. Stevens dissents, turning to an eerie solemnity anchored in but not limited to the real and very much of the moment. ROBERTA SMITH

‘I Want to Feel Alive Again’

Two dozen mostly young artists, along with a few well-established ones like Rebecca Horn and Mira Schor, appear in “I Want to Feel Alive Again,” the striking inaugural group show at Lyles & King’s new gallery space near Chatham Square. The work, in a variety of mediums, is all figurative, or at least evokes figuration. Nearly all the bodies are somehow altered, mutilated or constrained. But they’re not necessarily suffering.

A man with a see-through heart, in a painting by Phumelele Tshabalala, is distinctly self-possessed, as is Aleksandra Waliszewska’s girl with a flayed face. And the mood in Jessie Makinson’s imposing diptych “Skin Spy,” which shows a kind of elfin garden party, is only slightly tense. Bright colors abound, and so does sex, most notably in Gavin Kenyon’s sculpture “A Scar Is Not a Wound,” whose three bulbous concrete pillars are as phallic as they are figurative, and the 21 ink-soaked plaster tongues of Bhasha Chakrabarti’s installation “Kali.”

For me, though, the linchpin is Sara Rahbar’s “Separation (Confessions),” a pair of cast-bronze hands — her own — hanging against the gallery wall on two adjacent chains. Are they trophies or tools? Emblems of the artist’s power to impress her shape into the world, or tokens of her brutal commodification? A call to unity or relics of dismemberment? It’s all of them. WILL HEINRICH