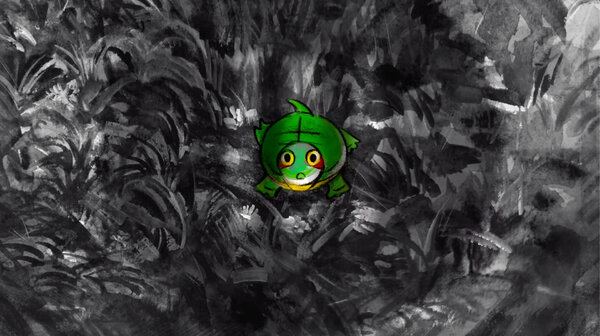 Beauty pageants unlike any you’ve ever seen. Supernatural creatures from folklore. A disposable coffee cup in love.

These are just a few of the subjects in KidsFilmFest, an international slate of short cinematic adventures that this year, like last, will be shown entirely online. For $10, families can view the two programs, which are presented by the Brooklyn Film Festival, any time from noon on Friday to 10 p.m. Eastern time on June 13. Streaming on CineSend, each series — eight titles for ages 3 to 7, and nine for ages 8 to 15 — will be followed by a recorded discussion with filmmakers.

The animated choices include Xi Chengzhuo’s beautiful, wordless “Ballad of Music Notes”; Catherine Chen’s “Yuan Yuan and the Hollow Monster,” in which a girl defeats a hurricane; and Susan Lim and Samudra Kajal Saikia’s “Boy Scientist,” about geek romance. But the most powerful love story is live action: “At Last,” Lorena Gordon’s portrayal of a gay teenager’s coming of age — and heartfelt coming out.
LAUREL GRAEBER

“Vienna Waltzes” is the last grand spectacle that George Balanchine created for New York City Ballet. It’s 45 minutes of waltzes, moving from the woods to a bawdy beer hall to elegant ballrooms, erotically charged and haunted. At the end, the stage is flooded by a maelstrom of waltzing couples, dozens of them, multiplied by mirrors.

From Thursday, starting at 8 p.m. Eastern time, to June 17, a 2013 performance of the work is available free on the company’s website and YouTube channel. It’s a fitting finale for a strong digital season that included a beautiful Sofia Coppola film about the company returning to its home theater. In September, the dancers will once again fill that stage in front of a live audience. For now, “Vienna Waltzes” fills the screen.
BRIAN SEIBERT

Outdoors? Online? How About Both?

With the city’s live-music freeze beginning to thaw and virtual programming still going strong, New Yorkers can look forward to a summer of music both outside and online. This weekend, the Brooklyn Museum’s flagship First Saturday program — still vibrant despite its necessarily smaller scale and new outdoor setting — offers a point of re-entry for the concert-deprived. The free Pride-themed program, starting at 2 p.m., features a drag show, a set by the Peruvian-born D.J. Undocubougie and a performance by Kalbells, the psychedelic synth-pop group fronted by Kalmia Traver, also known for her spirited singing with the band Rubblebucket.

Another musical offering this weekend comes from Lake Street Dive, a group of New England Conservatory graduates who, across seven studio albums, have honed a retro soul sound with a contemporary sheen. They will draw from their latest, “Obviously,” for livestreams on Saturday and Sunday at 8 p.m. Eastern time; tickets start at $20 and are available at boxoffice.mandolin.com.
OLIVIA HORN

Anthony Braxton Gives Us a Gift

The composer and improviser Anthony Braxton turns 76 on Friday. But he won’t be marking the occasion with nostalgia.

His “12 Comp (ZIM) 2017,” scheduled for release on Blu-ray audio and as a digital download, collects a dozen set-length performances, all devoted to one of his most recent concepts (“ZIM” refers to a compositional style premised on gradations of intensity). The ensembles vary between six and nine players, though each features multiple brass specialists (ranging from trumpet to tuba), two harpists (including Jacqueline Kerrod and Brandee Younger), and Braxton himself (on a wide variety of reeds).

Listening to all 10 hours of the album might seem forbidding, so start with one track; the play with density and spareness on each reveals an accessible form of experimental drama. “Composition No. 409,” available for preview on the album’s Bandcamp page, is majestic: It develops from a sensitive state of mysticism, with harps glistening over wisps of accordion drone, to conflagrations fanned by this saxophonist’s incendiary phrasing, still undimmed by age.
SETH COLTER WALLS

And They Lived Hilariously Ever After

Paul Rudnick worked on Broadway more recently than almost anyone. In April, when Nathan Lane gave a pop-up performance at the St. James Theater to signal the industry’s resurgence, he delivered a Rudnick monologue, playing a hard-core theater devotee.

Carter Ogden, the underconfident hero of Rudnick’s effervescent new novel, “Playing the Palace” (Berkley), is similarly smitten with the stage. Single and heartbroken on Valentine’s Day, he bikes across Manhattan imagining a musical number in which everyone else is paired off. Little does he know that he’s en route to his own meet-cute — with Edgar, the ridiculously handsome, sweet and emotionally damaged crown prince of England.

Comparisons to Prince Harry and Meghan Markle are inevitable as Carter and Edgar see obstacle after obstacle come between them. But this is a romantic comedy; the question isn’t whether love will triumph, only how. The answer may make you cheer.
LAURA COLLINS-HUGHES