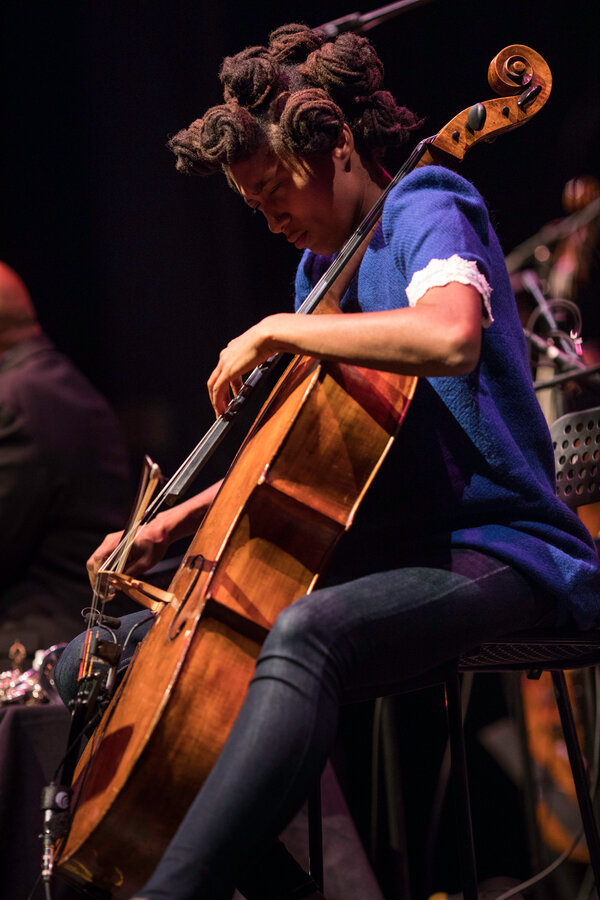 Spring jazz programming is in full swing again — most of it still virtual, but some of it in person. The big event on Friday is International Jazz Day, an annual UNESCO-sponsored celebration now in its 10th year, which culminates in the All-Star Global Concert, streaming at jazzday.com at 5 p.m. Eastern time, with artists including Herbie Hancock, Melissa Aldana and Angélique Kidjo beaming in from across the world. (PBS stations will air a special documentary on International Jazz Day at 8 p.m.)

Separately, at 7 p.m., as part of a continuing weekly YouTube series, “Fire Fridays: The Cats Talk Back,” from the W.E.B. Du Bois Department of Afro-American Studies at the University of Massachusetts, Amherst, the pianist Anthony Wonsey will give a livestreamed trio performance, followed by a lecture on gender roles in African-American music by the musicologist Maya Cunningham.

On Friday and Saturday night, a pair of festivals are happening in other cities: The Chicago Jazz String Summit, organized by the cellist Tomeka Reid, will stream on its website; and the first Bayfront Jazz Festival is taking place in person in Miami but also broadcasting at live.eluv.io/bayfront-jazz-festival.
GIOVANNI RUSSONELLO

Pandemic closures forced the Museum of the Moving Image to pause “Envisioning 2001: Stanley Kubrick’s Space Odyssey,” its exhibition on the making of “2001: A Space Odyssey.” But it will return when the museum reopens to members and certain other ticket holders on Friday and to the general public on Saturday, as will regular screenings of the movie, which are open to all starting Friday. Beginning this weekend, “2001” will show on alternating Friday evenings on 70-millimeter film and every Sunday afternoon on digital projection.

The museum will also play Kubrick’s other features, starting with “Dr. Strangelove” (on Sunday and May 7), and bring back its long-running See It Big! series, which this month includes the Kubrick project that Steven Spielberg finished, “A.I. Artificial Intelligence” (on May 9 and 15), from, well, 2001.

The museum requests that visitors review its safety guidelines in advance. For information on hours and tickets, go to movingimage.us.
BEN KENIGSBERG

Getting ‘Salty’ for Cystic Fibrosis

For the past four years, the Cystic Fibrosis Foundation has produced the stand-up event “Get Salty” at the Comedy Store in West Hollywood, Calif., attracting famous funny people such as Sarah Silverman to raise funds to fight the disease. Since the Store hasn’t quite fully reopened yet this year, the foundation has pivoted to a space that straddles the real and virtual worlds: the InCrowd Interactive Stage. On it, performers are surrounded by a semicircle of screens populated by audience members in attendance through Zoom.

On Friday at 9:30 p.m. Eastern time from that stage in Los Angeles, Richelle Meiss will host this year’s lineup, which includes performances from Ron Funches, the Sklar Brothers, Caleb Hearon, Laurie Kilmartin and Atsuko Okatsuka. Tickets to the livestream start at $35 and are available on the foundation’s website; additional donations are welcome.
SEAN L. McCARTHY

Before He Became ‘The Greatest’

Muhammad Ali was such a larger-than-life figure that it can be hard to imagine him as anything other than a world champion. But Idris Goodwin has done exactly that in “And in This Corner: Cassius Clay,” from the Atlantic for Kids division of Atlantic Theater Company.

Directed by Reggie D. White, this episodic audio adaptation of Goodwin’s stage play follows the boxer, who was born Cassius Clay Jr., from age 12 to 22. Showing that Cassius (Franck Juste) was sensitive to injustice — he defeats the neighborhood bully — the script also chronicles his inner conflict over joining a more wide-reaching fight: the struggle for civil rights.

This nuanced work, which requires reservations, can be streamed free — as four segments or as one 55-minute performance — on Atlantic’s website at least through May 24. YouTube listening parties of the full production will also take place every Saturday at 10:30 a.m. Eastern time. These will be followed by a discussion with the director and cast on Saturday, and a make-your-own-radio-play workshop on May 15.
LAUREL GRAEBER

An Obstructed Path Toward Progress

After the conviction of Derek Chauvin, figuring out where we are in what President Biden called our “march toward justice in America” is difficult. To provide perspective, the New-York Historical Society is offering “Black Citizenship in the Age of Jim Crow” free on its website. The exhibition, which appeared at the society in 2018 and ’19 and has been traveling the country since, explores how deeply rooted the circumstances of George Floyd’s murder — and many other violent acts like it — truly are.

Assembled from photographs taken when “Black Citizenship” was at the Atlanta History Center earlier this year, this online version allows visitors to enlarge images of objects and click on panoramas for a 360-degree view. Beginning with Dred Scott’s fight for citizenship, the exhibition moves through the events that led to the establishment of liberties for Black Americans and then shows how they persevered when Jim Crow laws took many of those liberties away, highlighting the push and pull of progress that has long characterized the lives of Black people in this nation.
MELISSA SMITH