Our critics and writers have selected noteworthy cultural events to experience virtually or in person in New York City.

The West Village as a Demimonde 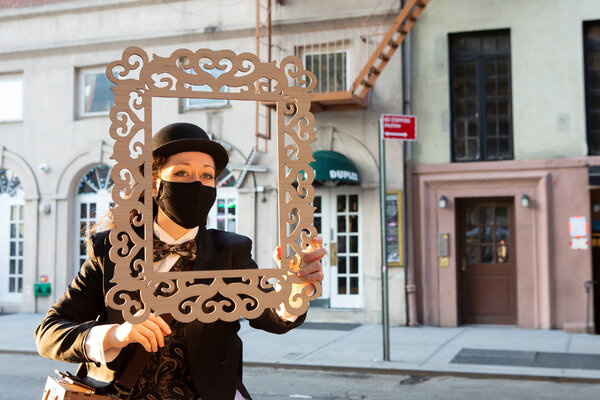 Live theater has returned to Manhattan, though no seats are available. In “Voyeur: The Windows of Toulouse-Lautrec,” actors from Bated Breath Theater Company will lead eight-person audiences on a walking tour of the West Village. That neighborhood will double for 19th-century Montmartre, the quarter where the artist Henri de Toulouse-Lautrec spent some of his final syphilitic months. The show, conceived and directed by Mara Lieberman with puppet design by James Ortiz, takes place mostly outdoors with one brief foray inside. As audiences wander the Village’s wide and narrow byways, masked performers emerge from sidewalk and stoop, conjuring the cabarets and cafes of Bohemian Paris. Through windows, spectators can peek into Toulouse-Lautrec’s aperitif-fueled dreams.

Will immersive theater work when the world weighs so heavily? Can you maintain appropriate social distance as you imitate a flâneur? Will an N95 mask fly at the Moulin Rouge and can you still live la vie Bohème when your alcohol of choice is hand sanitizer and open-container laws dissuade a bring-your-own-absinthe policy? The show runs — rain or shine — through Nov. 7, beginning in front of the Duplex cabaret and piano bar. Tickets, which cost $75 ($84 with a cocktail pairing), are available at unmakinglautrecplay.com.
ALEXIS SOLOSKI

Combining Passions for Music and Fashion

The status of Rihanna’s long-awaited ninth album may remain a mystery, but on Friday the singer will drop a new morsel on which her starved fans can nibble.

The “Savage X Fenty Show Vol. 2,” which can be streamed free with an Amazon Prime subscription, is ostensibly a promotional exercise for Rihanna’s lingerie brand. But RiRi — a culture maker as well as a retailer — has a knack for making commerce feel transcendent. Like 2019’s “Vol. 1,” this year’s fashion show is a more enlightened answer to its Victoria’s Secret analogue, complete with inclusive casting, rigorous choreography and a slew of musical guest stars.

Among them are the Spanish singer Rosalía and the English rising star Ella Mai, who honors the occasion with a brand-new single. The rapper Roddy Ricch brings his thematically fitting track “High Fashion” — though the opportunity to work Fenty into its lyrics, which already name-drop Prada, Chanel and Dior, passes unheeded. Miguel, whose bedroom-friendly R&B is suitable for many of the same occasions as lingerie, also performs.

Other big-name musicians on the bill, including Rico Nasty and Rihanna herself, stick to modeling. And while Lizzo fans may have hoped to hear her sing, they aren’t likely to be let down by her contribution to the program: dancing in an electric blue Fenty matching set to D’Angelo’s “Brown Sugar.”
OLIVIA HORN

Taking It to the Streets

For more than six months, dancers in New York City have been making do, for the most part, without indoor studios and theaters. Kitchens and living rooms have become makeshift rehearsal spaces; classes happen in parks and parking lots. Colliding with furniture or jumping on concrete may not be ideal, but for many, these inconveniences are no deterrent to dancing.

In that spirit of perseverance — and to bring attention to the importance of dance as an integral part of the city’s cultural ecosystem — the Dance Rising Collective, a new group of artists and administrators, is hosting what it calls a “hyper-local dance out.” On Thursday and Saturday from 5 to 5:30 p.m., dancers will emerge in public spaces to make their presence known. “We are dancing to be seen, counted, and spark crucial conversations about the future of dance in NYC,” the Dance Rising website states. The call for participants went out to anyone who identifies as a professional dancer, choreographer or teacher.

The performances, which span many genres, are planned for all five boroughs. To find one in your area, check the Dance Map section of dancerising.org. The dances will also be filmed and, later this fall, shown at sites around the city.
SIOBHAN BURKE

Doubling Down on the Delirium

The Salzburg Festival continues to deliver stylish home-video products. Its latest operatic Blu-ray release is the director Barrie Kosky’s staging of Offenbach’s “Orphée aux Enfers,” and it extends some of the festival’s recent, adventurous traditions.

Kosky’s decision to have the character John Styx recite all of the opera’s spoken dialogue flirts with audience confusion — since he’s seen and heard as a vocal-effects artist and radio-play announcer before his character is introduced in the second act. Yet there is delight to be had in just going with it.

Max Hopp relishes all that extra work in the role of Styx — in ways that recall his multicharacter facility in Kosky’s version of Oscar Straus’s “A Woman Who Knows What She Wants!” Similarly, the coloratura soprano Kathryn Lewek’s performance of Eurydice offers both comic commitment and some high notes of indefatigable stamina. Nor is Kosky so experimental that he can resist a classic cancan during the climactic “Galop Infernal.”
SETH COLTER WALLS

Jenny Yang, an executive story editor on Fox’s “Last Man Standing,” made Variety magazine’s “10 Comics to Watch” in 2020 by figuring out how to improve the virtual comedy experience: Within the Nintendo video game Animal Crossing, she created a club where comedians can perform. She then shares her screen with a wider audience through Zoom in the show “Comedy Crossing.”

Yang has hosted eight shows since June, about two each month, most recently adding a “laugh room,” where select audience members are unmuted. And comedians like Amber Preston have helped out, controlling the avatars of performers who can’t access Animal Crossing during the broadcast. Saturday’s installment of “Comedy Crossing,” at 10 p.m. Eastern time, features performances by Chris Fairbanks, Dana Donnelly, Chris Bryant and Dewayne Perkins. Tickets are free and available on Eventbrite, although Yang encourages donations to her Venmo account to tip the comedians and raise money for other causes.

“Listen, Animal Crossing is not paying me for this,” Yang told fans as they watched her virtual-shop in the game after the last show in mid-September. “They truly should.”
SEAN L. McCARTHY

As restaurants across the city begin to offer indoor seating again at reduced capacities, Smalls will welcome back listeners for scaled-down, in-person shows this weekend. That cozy West Village basement was also an early leader in livestreaming performances from its stage amid the pandemic, and it has kept up a daily schedule of streams since the spring.

For Smalls’s first show since March with a seated audience, the saxophonist and flutist Lew Tabackin, 80, a cherished elder and frequent face at the club, will perform on Friday with his quartet, featuring Joe Magnarelli on trumpet, Boris Kozlov on bass and Mark Taylor on drums. Sly but energetic, Tabackin’s sax playing has always called back to the swing era, reaching through cool jazz and bebop on the way there. He’s dexterous and sensitive on the flute, too, and sometimes more likely to venture into modal expansions on that instrument.

The concert starts at 5 p.m. Eastern time. You can access a livestream at smallslive.com by signing up to become a Smalls member. To attend in person, members must give at least $40 through the website; the club will admit no more than 15 people per set. Food from the nearby Murray’s Cheese Bar will be available for purchase at the show.
GIOVANNI RUSSONELLO

A Festival’s Next Chapter

It’s not hard to guess where the Brooklyn Book Festival usually takes place. In this highly unusual year, however, the celebration has migrated to cyberspace, with Virtual Children’s Day, for ages 2 to 11, and Virtual YA Out Loud, for tweens and teenagers. The online milieu means that young people all over the country can enjoy the free presentations and see their favorite authors and illustrators in action. Everything will stream on Saturday at brooklynbookfestival.org, with no limits on how many can register for each segment’s events.

The children’s highlights, from 10 a.m. to 2 p.m. Eastern time, include a reading and a friendship bracelet craft with the Newbery Medalist Meg Medina and a livestream of spooky stories by the writers R.L. Stine, Claribel Ortega and Sophie Escabasse. Attendees can also cheer on the four competitors in the ever-popular Illustrator Smackdown, while comics fans 5 and older can make their own creations in a workshop with the author and artist Mika Song.

The young-adult slate, from 1 to 6 p.m., will feature programs like Raise Your Voice, in which four novelists discuss voting rights, the justice system and political activism. Drawing Our Stories will explore identity — always a teenage preoccupation — with the writers and illustrators Mike Curato, Kiku Hughes and Gene Luen Yang.
LAUREL GRAEBER