Armie Hammer is ready to ring in the New Year by spending some quality time with his kids. He traveled to the Cayman Islands, where his estranged wife Elizabeth Chambers has been living with their kids, daughter Harper Grace, 6, and son Ford Douglas Armand, 3½, since the beginning of the pandemic. He’s already at the tropical locale, but he hasn’t been reunited with his kids just yet — he has to endure a 14-day government-mandated quarantine. 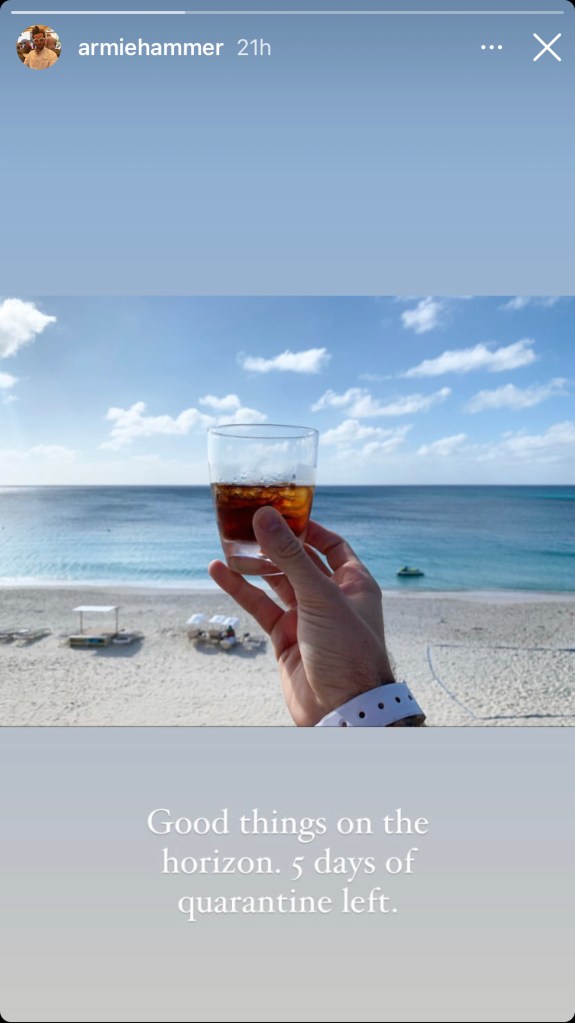 Things don’t look too horrible for the Rebecca actor because he shared a pretty relaxing scenic photo from his beachside quarantine location. He raised a glass to the blue sky and crystal clear water celebrating the fact that his time in isolation was almost over, “Good things on the horizon. 5 days left of quarantine,” he wrote in his Instagram Story on Tuesday.

Hammer and Chambers started the pandemic together in the Cayman Islands, but announced their split in July after 10 years of marriage. “As we enter into this next chapter, our children and relationship as co-parents and dear friends will remain our priority,” they wrote in matching Instagram posts. “We understand this news lends itself to public dialogue, but in the interest of our children and our family, we’re asking for privacy, compassion and love during this time.”

Even if co-parenting was the unified message at the beginning, things got a little messy in October when Hammer filed for joint custody of the children and asked Chambers to return to the U.S. She elected to stay on the island because it offered the kids the opportunity to attend school in-person versus the virtual options back in Los Angeles. Hammer eventually sided with his ex because “everyone agreed that’s what’s best, especially with cases getting worse in the U.S,” a source told People.

Hammer has not seen his children since July when he left the Cayman Islands, so this will be a big reunion for the dad of two. It’s obviously been a hard road with the pandemic and a divorce going on at the same time, but it looks like he and Chambers have found a solution that works best for everyone involved — and the 14-day quarantine with an ocean view isn’t the worst thing to endure.