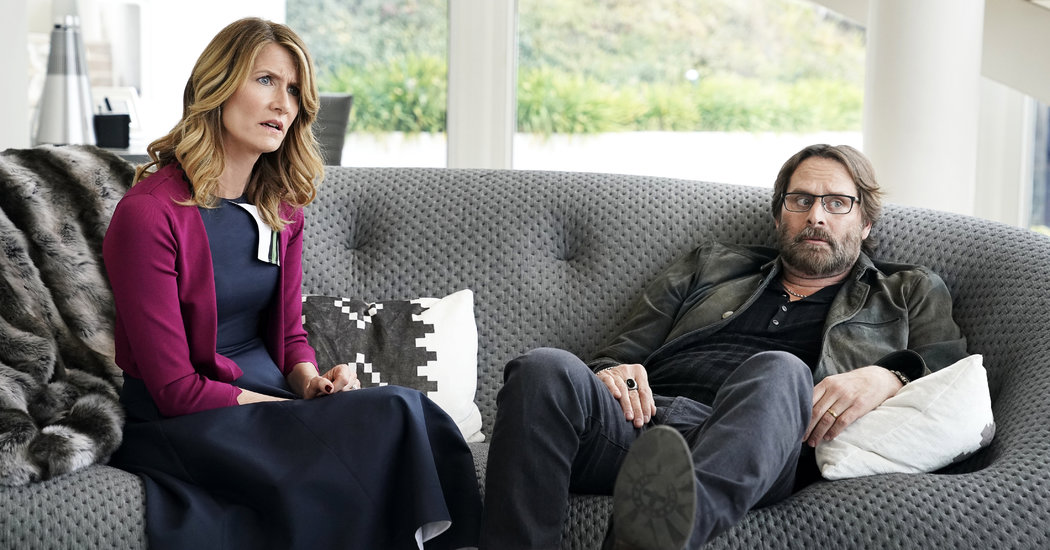 Is it me, or are some of the therapists in Monterey a little much?

We know from Season 1 — when Ziggy saw a counselor after being accused of bullying Amabella — that there’s a perfectly regular child psychologist in town with a perfectly regular office whom Amabella could have gone to see after her panic attack. But Renata doesn’t do regular, so for her daughter, even the mental health professional has to be over the top.

Enter Dr. Little Bo Peep — played wittily by Kerri Kenney — who shows up at the Klein household to figure out what’s troubling Amabella. Turns out it’s her strung-out mom and her possibly jail-bound dad, and of course, the imminent collapse of our planet. That last fear is a result of the second grade class’s unit on climate change, which is stoking anxiety in the kids and giving the Monterey moms more fuel for their fiery hatred of the school’s principal, Warren Nippal (P.J. Byrne).

It’s hard to imagine why Celeste would suggest her, though, because hasn’t Dr. Reisman always come across as frankly the roughest therapist in the game? 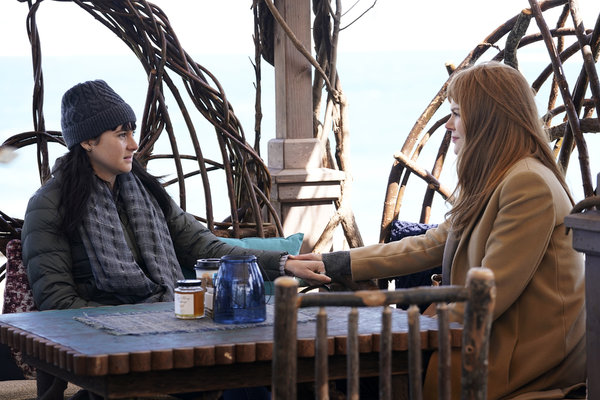 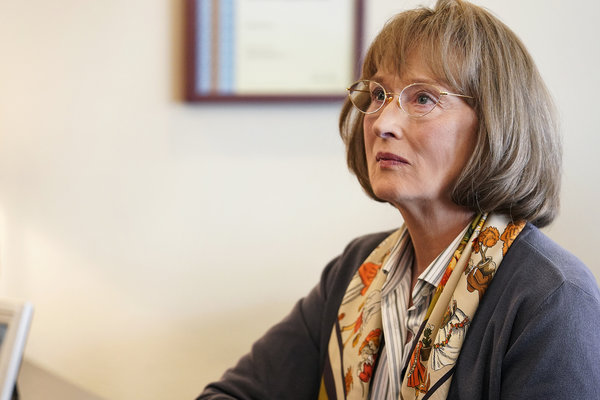 She and Celeste get into a real head-butt this episode when Dr. Reisman tries to convince her that all endearing thoughts of Perry should be wiped from the memory bank. Celeste becomes defensive. She likes the happy memories. So much so that she compiled all the nostalgic photos and videos into an e-collage for her kids.

But Dr. Reisman isn’t buying into the whitewashing. She sees the bruise on Celeste’s arm and accuses her hurting herself. The walls go higher up. No, Celeste insists, she does not self-inflict her wounds. She does not miss the war.

Dr. Reisman is just as cutting with Madeline and Ed, who are on her couch to give their marriage one last shot. With a tone dry as dust, speaking to the couple as if they’re two children in the principal’s office, she picks at them — mostly Madeline: How can Ed trust that you will never cheat on him again? Why should he? Why were you unfaithful? Is it because you didn’t go to college? Is it because you see yourself as a nobody because you didn’t go to college? Are you projecting that insecurity onto Abigail? Also, why did Nathan leave you?

And if your parents had such a great marriage, why aren’t you close to them? (O.K., the scene cuts short of this jab, but you can tell it’s next on the list.) Sure, it’s a therapist’s job to ask the hard questions, but Dr. Reisman has always foregone gentle needling in favor of twisting the knife.

Turns out, though, that the marriage between Madeline’s mom and dad wasn’t so perfect. Taking some friend time in a car with Celeste, comparing notes from therapy, Madeline confesses that she once caught her dad cheating on her mother and that it instilled in her a deep-rooted fear that marriage isn’t to be trusted. Add this tidbit to the ever-growing list of long-buried secrets now suddenly on the surface.

Worse yet, she has never spoken of this until now, even though its effects have clearly bled into her own relationships. All it took was a little prodding from Dr. Reisman and boom, there it is.

That’s the thing about digging: You never know what you’re going to get. Even when you’re intent on uncovering one secret, you can end up unearthing a whole bunch of other ones you would rather not have found.

Desperate to prove that her son wasn’t the monster the Monterey moguls insist he was, Mary Louise corners Jane outside of work and, as politely as one can, asks her to submit Ziggy to a paternity test. Offended and put off, Jane shuts her down but softens when she sees Mary Louise once again, gazing at Ziggy as if he were one of her own sons.

Jane sits down with Mary Louise and, almost forgetting themselves, they ooh and ahh over pictures of Perry and his brother Raymond, marveling at the likeness they share with Jane’s boy.

“Is he sweet?” Mary Louise asks Jane about Ziggy, then prattles dreamily about how sweet and tender her darling Perry was.

Not to Jane, and Jane tells her so.

Still, Mary Louise just can’t surrender to “this notion that he was evil.” She wants justice for her son. She wants his name cleared. She wants her happy ending.

But there aren’t a lot of those going around, at least according to Madeline, who blubbers out that inconvenient truth at an Otter Bay assembly. Why? Because we lie. We lie to our kids, we lie to each other, and we lie to ourselves. Those lies catch up, and if Bonnie’s midnight sweats are any indication, they’re going to get us all.

Things I’ll Be Thinking About Next Week:

It’s not just Madeline — an uncomfortable childhood memory is creeping up for Bonnie, too, and it offers a glimpse into why her mother makes her so uneasy. In a flashback scene, a young Bonnie is scared of putting her head underwater in a pool, and when Elizabeth’s gentle coaxing doesn’t convince her, Bonnie is suddenly, and startlingly, pulled under by her mother. It’s a blink-and-you-miss it scene, but it feels essential.

It’s also worth noting that, despite Bonnie’s having told her mother to leave in the last episode, she did not. Also, although Ed told Madeline he was leaving her, he did not. And not related but still intriguing: Bonnie and Ed seem to be getting along famously.

Madeline and Renata are the friendship power couple we didn’t know this show needed. 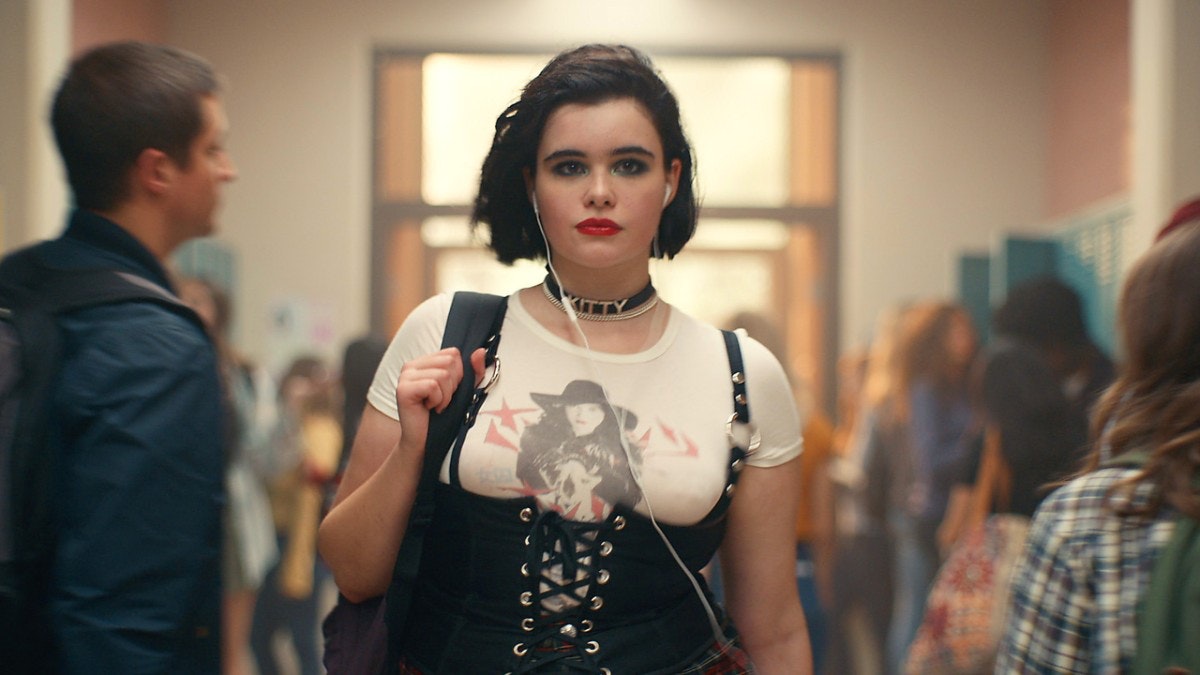 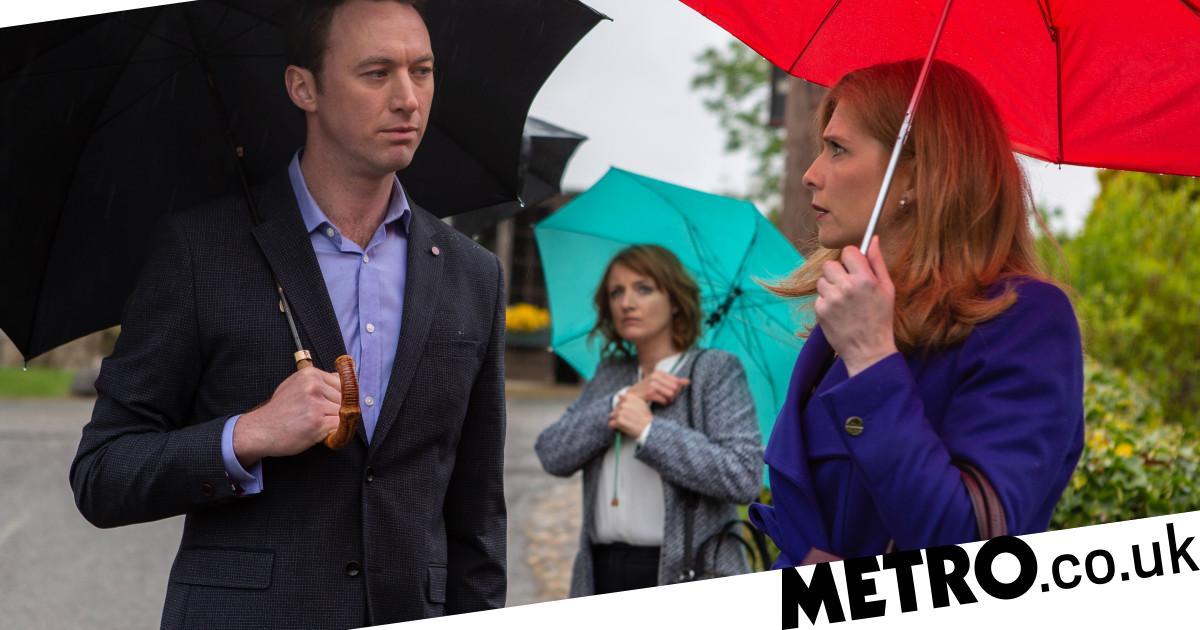