Health care professionals in India are being evicted from their homes because of the coronavirus, while at least one doctor was assaulted by police on her way to work. 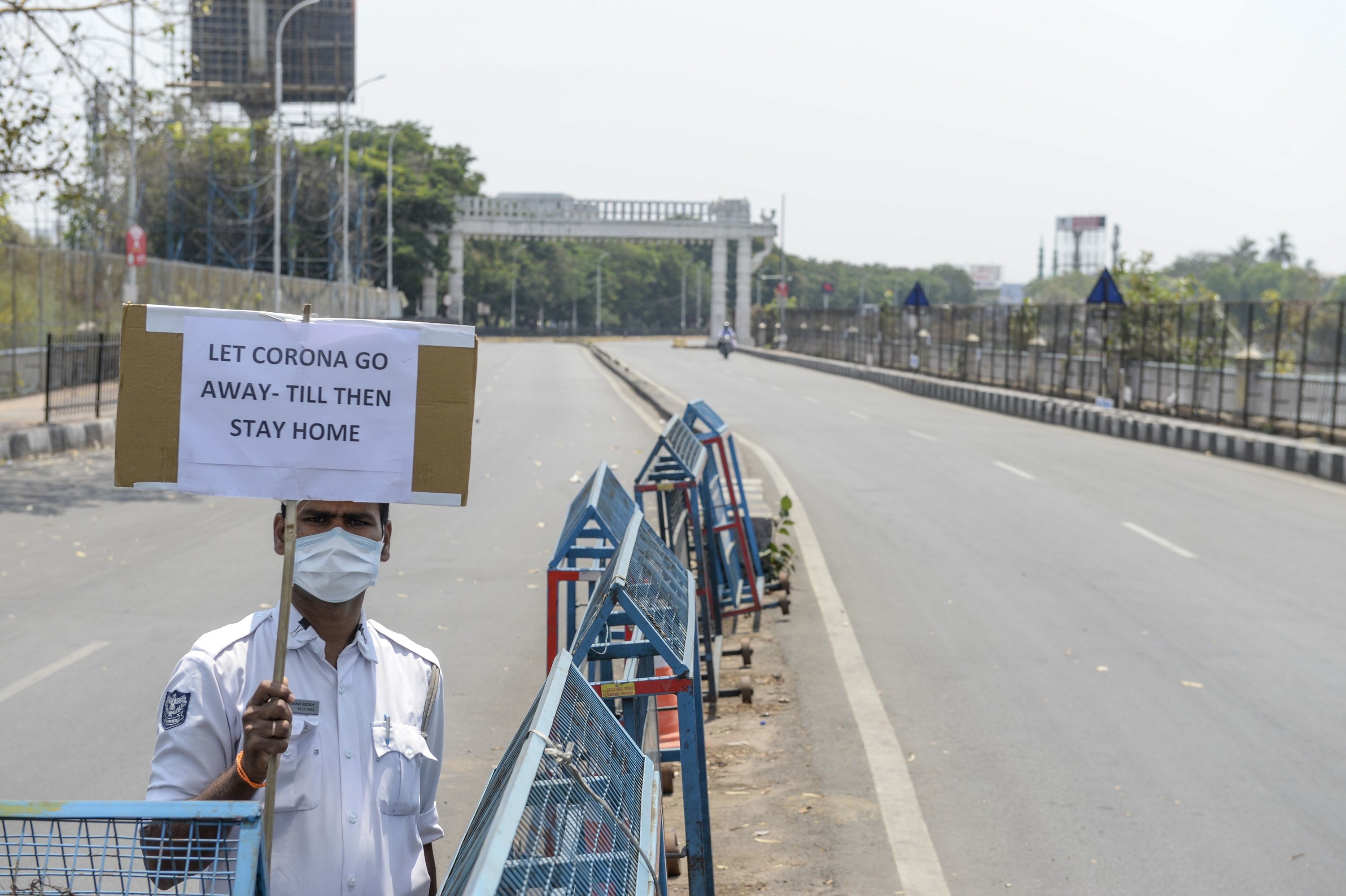 A traffic policeman hold a placard advising commuters to stay home in Hyderabad.

At this point, H. said, a senior police official at the station heard the women insisting that they were doctors and stepped in to help. “He asked the officer who had brought us there to apologize and let us go,” she said. “The officer looked at him and said ‘I’m sorry, sir.’ He never even looked at us, leave alone apologize to us.”

H. and her colleague asked the police to drop them at their hospital, where they proceeded to work 12-hour shifts. At the end of her shift, H. finally called her sister, also a doctor at the same hospital, and told her what had happened.

“I could not believe my ears, I couldn’t believe that this happened just a few hundred meters from where I was,” her sister told BuzzFeed News. “We are four siblings, all doctors. Our father is a policeman. Duty is something we take very seriously. I teared up in anger as she told me what happened to her.”

Together, both women informed the head of H.’s department about the assault, and went back to the police station where H. had been taken the night before to file an official complaint. H.’s sister asked the police to provide them with the CCTV footage from the intersection where the assault had taken place. “I have absolutely no doubt that the footage will never be made available to us,” she said.

On their way home, the women learned the assault had been filmed by witnesses and posted on social media — cross posted on the Instagram and Facebook pages of groups of medical students and young doctors before making its way to Twitter.

But the ordeal did not end there. The next day, when the sisters went in to work, they were met by a contingent of police officers and a senior member of the hospital administration. The men asked H. to retract her complaint and forgive the officer who had assaulted her, “They told me, ‘We are all fighting something much bigger together, let’s fight coronavirus, not each other,’” she said.

H., her sister said, was outraged at the patronizing tone of the conversation.

“It wasn’t a fight, he assaulted my sister,” she said. “But people told us, ‘you will spend years in court, her life will be ruined.’” The women agreed on the condition that the police officer would have to apologize to them in front of the press. The officer refused, but the complaint was still dropped.

“Finally, all we got was a ‘sorry, madam.’ My sister will carry this trauma of being publicly beaten for the rest of her life. It sounds like a cliché, but the powerful can get away with anything.” 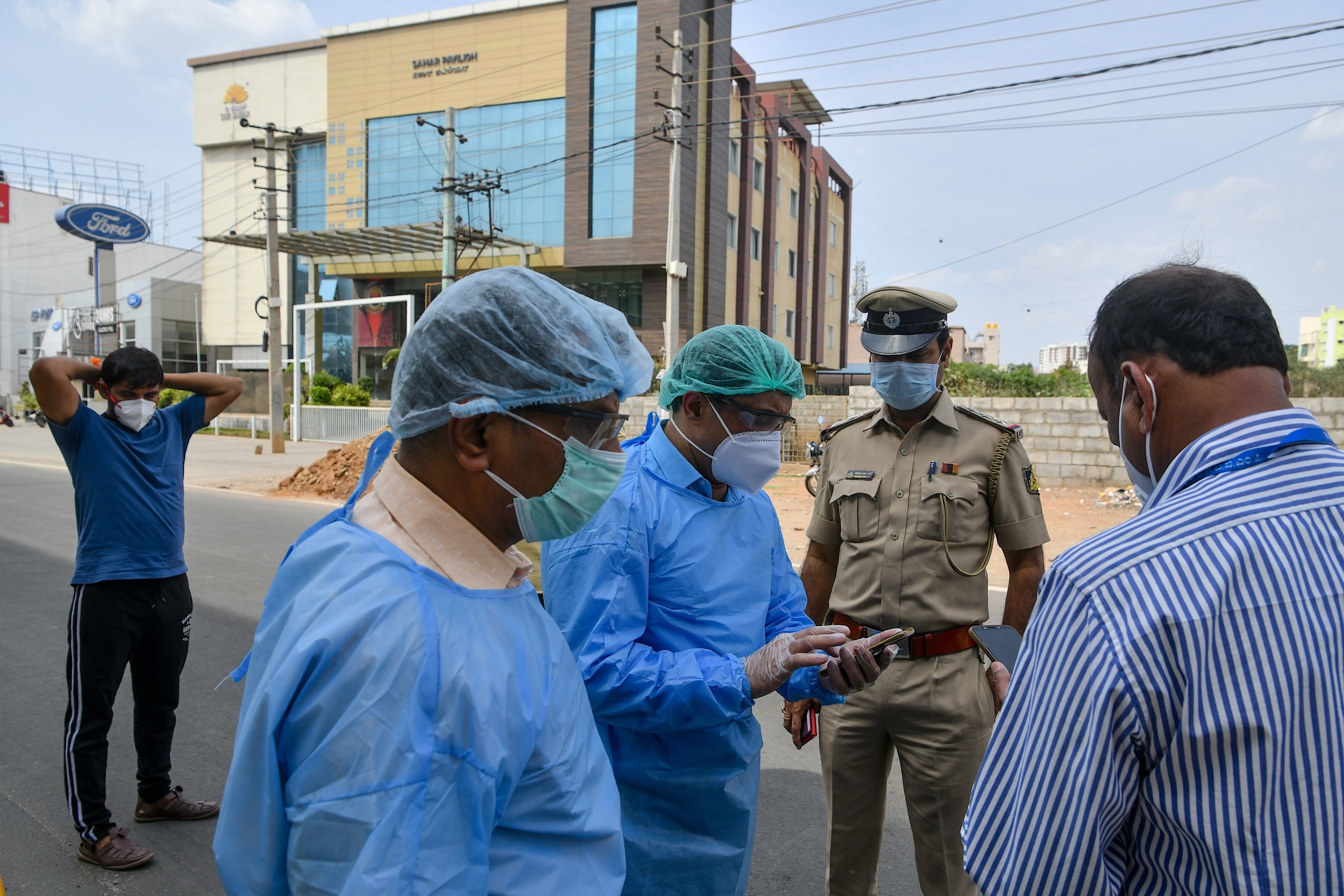 Paramedics, government municipal and police officials stand outside a private hotel in the city of Bengaluru as they plan the safe evacuation and hospitalisation of a customer believed to have tested positive for the coronavirus.

Confirmed COVID-19 cases have remained surprisingly low in India, although there are concerns that the real rates are much higher, thanks to the fact that India also has some of the lowest rates of testing in the world. By Wednesday, India had recorded just over 600 positive cases and ten deaths. Still, the country’s government has taken aggressive measures to slow down the spread of the virus. Last week, India stopped train and flight services nationwide, right before large swathes of the country were put under lockdown.

H.’s story is only one among a multitude of horrors Indian professionals on the frontline of the coronavirus outbreak are facing. Over the last few days, the country’s airline cabin crew, food delivery workers and journalists, have faced harassment from law enforcement and the general public for supposedly breaking curfews and being potential coronavirus carriers because of the public nature of their work. But health care workers have had it particularly bad due to their perceived proximity to people infected with the coronavirus.

Dozens of India’s doctors have taken to social media to complain about discrimination from landlords who have asked them to vacate their homes, several doing so anonymously because they feared professional retaliation. “One owner said that we were DIRTY,” a house surgeon from Telangana, the state where H. lives, wrote in a viral Facebook post .

Earlier this week, doctors across the country sought government intervention.

“We wanted the entire country to know that we were being harassed,” said Adarsh Pratap Singh, president of the All India Institute of Medical Sciences (AIIMS) Resident Doctors Association. On Tuesday, Singh and the AIIMS wrote a letter to Amit Shah, India’s Home Minister and Modi’s right-hand man.

“Many doctors are now stranded on roads with all their luggage, nowhere to go, across the country,” the letter said. “We condemn such attitude and [request] an order [to stop this].”

In response, India’s health ministry released an order saying that the government would penalize house-owners who asked doctors and other health care professionals to vacate their houses. “Such behaviour amounts to obstructing public servant [sic] in discharging their duties” it said.

On Wednesday, Health Minister Harsh Vardhan said he was “deeply anguished” to see what was happening. “Any harsh steps will demoralise [doctors].”

But for some doctors, the government’s action came too late. Salma Khan had just returned home to New Delhi on March 16 after a two-week trip to Japan, where she was visiting her husband, when she heard a commotion below her building. It was her neighbors, demanding she leave the building right away and find somewhere else to live.

Khan, who works as a pathologist at the AIIMS, India’s top hospital and medical school, had already been screened for symptoms at Indira Gandhi International Airport when she landed, where she was cleared by authorities to go home and self-quarantine. But her neighbors didn’t care.

“They panicked, and thought I could be a carrier,” Khan told BuzzFeed News. “Everyone knew I was a doctor. I was wearing a mask and about to quarantine myself. I told them I wouldn’t come into contact with any of them. But I still couldn’t convince anybody there.”

Khan called up her landlord, who said he couldn’t do anything about the situation.

Nearly three hours later, Khan realized that the seething crowd wasn’t going to give in. Ten people had gathered below the building, and more people were jumping into the fracas from their doorsteps without actually coming out of their apartments. Khan felt she had no choice but to book a flight leaving that evening for Kerala in southwest India to stay with her parents. “I was lucky tickets were still available,” she said. “I don’t have any relatives I could go to in Delhi.”

Khan said that fear of the coronavirus had gripped everyone.

“We’re humans,” she said. “When fear strikes someone, they don’t care if you are a doctor.”

Referring to the ten minutes when Indians across the country banged their pots and pans, rang bells and applauded health care professionals from their balconies on Sunday, Khan laughed and said, “It doesn’t make any difference. There needs to be something practical. We all know there’s a scarcity of personal protective equipment right now. We should be diverting everything to that.”●

Related posts:
Tags: ‘B’, Are, around, Doctors, THE, World
Recent Posts
Categories
We and our partners use cookies on this site to improve our service, perform analytics, personalize advertising, measure advertising performance, and remember website preferences.Ok