Of all the strange, attenuated long-distance calls of the last 16 months, the British artist Ed Atkins’s check-in with his mother surely wins a prize for pandemic alienation.

It was August, during a brief relaxation of European travel restrictions, and Atkins had traveled to Berlin from his home in Copenhagen. He’d spent the first half of 2020 thinking about how to combine sophisticated computer graphics with free-flowing conversation — and now, in Germany, he was trying to speak normally while sensors recorded his every gesture and twitch. His other artistic collaborator was his mother, Rosemary, who was on the other end of the phone line.

“We were in a wonderful, sort of decrepit hotel,” Atkins recalls. He was sitting alone while a team from Mimic, a Berlin studio specializing in motion capture animation, “sat in the neighboring room, like Stasi members. They were monitoring me as I sat, awkwardly, in full-body Lycra, and an unwieldy head rig with a GoPro on it.”

Back in England, his mother spoke haltingly of her own childhood and marriage — the promise she once felt, the disappointments she now lives with. Atkins tried to elicit memories from her past, but his body suit was damp with sweat. His neck ached from the headgear. Cameras rolled inches from his face, and in every corner of the suite. And, all the while, “two German men in the neighboring room were listening in on everything I’m saying to her.”

It was, the artist tells me one sweltering New York afternoon outside the New Museum, “this phyllo of ludicrous levels of performance” — and now it’s been translated into “The Worm,” the animation at the heart of his new show there. The artist’s movements animate a digital stand-in who resembles some sort of TV host, shifting in his midcentury-modern chair, perspiring under virtual klieg lights. But while Atkins’s body has been supplanted by an avatar, the soundtrack is not reprocessed at all: just the artist and his mother, made of ones and zeros but all too human.

“Dad was very unconfident with his physical self,” his mother confides in voice-over. Later, softly, she says, “I don’t really fit the sort of stereotype of being depressed.” We watch as the TV host scratches his CGI nose, shuffles in his chair, cracks his fingers; it’s hard to listen to this. “Oh, Mum…”, replies the son — or the avatar.

We were catching up over $6 iced coffees during a break from the installation of the New Museum show, titled “Get Life/Love’s Work.” Atkins speaks with equal naturalness about the most arcane poetry and the newest computer graphics software, and at 38 he still has a baby face, offset by flecks of gray hair. It’s a face I know and don’t know. Most of the time, in his art, I’ve seen it behind a computer-generated mask.

Most of his ultra-high-definition videos feature a single avatar, which the artist dons like a theater costume. Alone in his studio, he performs their expressions and movements with prosumer facial-recognition technology, sends them through Grand Guignol torments and slapstick pratfalls, and voices their poetic scripts in ghostly voice-over. They have skin and stubble so convincing it feels perverse, and hematomas that glisten like puddles after rain.

The videos have made him one of the most acclaimed artists of his generation. Barely out of his 20s he’d had solo exhibitions at leading museums in London, Paris and Amsterdam. Yet what Atkins reaffirms here at the New Museum — where his show includes not only computer-generated video, but also painting, poetry and even embroidery — is that the hoary “intersection of art and technology” could hardly be less interesting to him. What really animates him are love and ennui, terror and regret: the enduring emotions that our technologies can’t contain.

“The work can seem like it’s exclusively bound up with these technological questions, and has been associated with terms like ‘post-internet,’” said Laura McLean-Ferris, the chief curator of Swiss Institute in the East Village, who has followed Atkins’s work for a decade. “While these forms of media are very important aspects of the work, Ed has also a very strong literary quality, which has perhaps been missed before. They’re animated by a grief that’s uncontainable and unruly, and kind of seeps out of the work.” 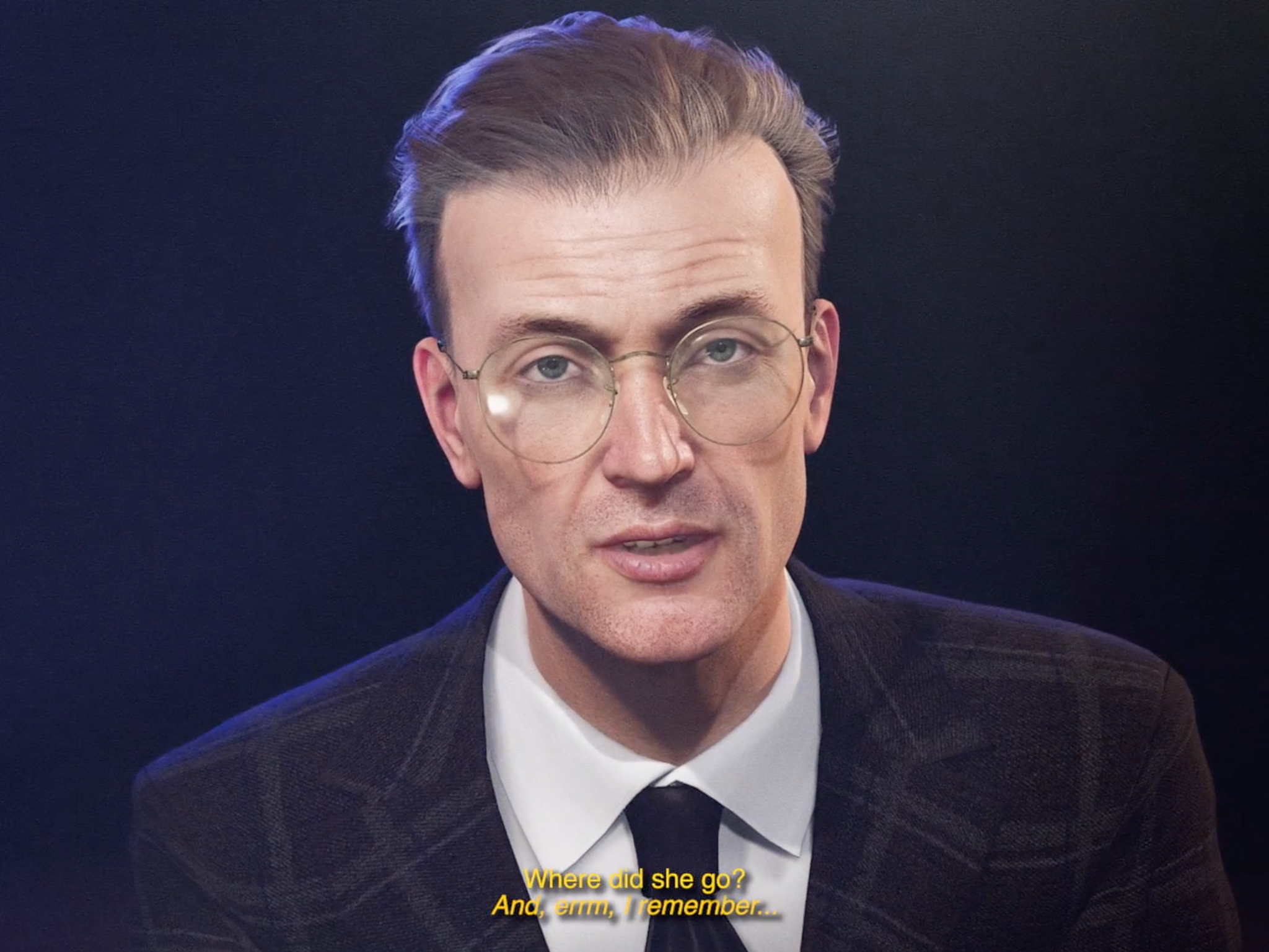 “So much of the work, towards the beginning, was coming out of my father’s death,” Atkins reflects now. “You do still have a body, and it will die, and you will die. There’s nothing that changes with this …” — and he points to my iPhone, faithfully recording our chat, instantly converting our speech into a good-enough written transcript.

Atkins grew up in a village outside Oxford, where his father worked as a graphic artist and his mother as a secondary-school art teacher. “Painting and more classical stuff abounded at home,” he says, “and it was sort of inevitable that I ended up going to art school.” But he was also absorbed by the cinema, particularly the darkly comic animations of the Czech filmmaker Jan Svankmajer, and even more by the pyrotechnical postmodern literature of Donald Barthelme and Robert Coover.

He graduated from London’s Slade School of Art in 2009, and in the same year his father died of cancer. Death, loss, distemper, debility: these have haunted his art ever since. In his breakthrough work “Us Dead Talk Love” (2012), two decapitated heads interview each other about eyelashes, hair follicles, the littlest details of their absent bodies. Their eyebrows twitch. Their skin shows razor bumps. They speak, in a strange blank verse, of the flesh and blood they don’t actually have, the “lively excretions of a pair of corpses in stultified congress.”

“Ed’s work was incredibly new and shiny — they looked like CGI paintings of depressed men!” recalls the British American artist Danielle Dean, who attended art school in London with Atkins. “It was like the experience of going to the cinema and being immersed in a digital universe; all of that was happening in the gallery. I hadn’t seen that level of affect before.”

His avatars are particularly male, particularly white, particularly English — and often exhibit that subclass’s familiar emotional hangups. “Help me communicate without debasement, darling,” begs the avatar in “Ribbons” (2014): a skinhead drunk, collapsed over pints of beer, who coughs and burps but also sings a fine snatch of Bach (in Atkins’s voice). “Old Food,” seen at the last Venice Biennale, includes a stunted child crying rivers at his piano lesson, as if his body were just a bag of tears.

They speak in aloof, sometimes foul verse, which Atkins voices himself, and indeed he’s as much a writer as an artist. (“Old Food” is both a video series and a book of prose poetry, and at the New Museum “The Worm” is protected on a sheet embroidered with poetic fragments composed with artificial intelligence.) Depending on your mood their speeches can break your heart or make you roll your eyes. “It’s tapping into something to do with identity and white maleness, but without necessarily being very critical of it,” Dean observes. “The avatar can be propped up and perfect, but he also allows moments of the sad, depressed white male who isn’t quite good enough.”

Here’s the critical point, though: these avatars are not “characters.” They have no names, no back-stories, no motivations. (If you go in for that sort of thing I suggest you stick with Netflix.) They’re more like containers, or receptacles. They’re empty shells, which, Atkins says, let him “dwell in places that are too uncomfortable otherwise.”

They aren’t even that fancy on the back end — just off-the-shelf figures that anyone can buy, animate and voice from a personal computer. It took me just a minute, scrolling through the out-of-the-box personages on the 3-D marketplace TurboSquid.com, to find the generic white-guy avatar who stars in Atkins’s 2015 video “Hisser,” moaning apologies and dreaming that a sinkhole will swallow his house. (You can buy him yourself for $349.)

The exact same guy serves as Atkins’ avatar in “Safe Conduct,” shown at Gavin Brown’s Enterprise shortly after Brexit, which transports him to a monstrous parody of British Airways safety video. The avatar placing his own brain and liver through the airport metal detector, the organs plopping into the plastic tray with a hilarious squish.

His use of readymade avatars harks back to Annlee, the dirt-cheap Japanese manga character that Pierre Huyghe and Philippe Parreno purchased and “freed” in 1999. Back then those store-bought virtual beings were little more than line drawings. Now they’re almost lifelike. And Atkins uses their almost-but-not-quite humanity as a shield, a prison, and a funhouse mirror.

“Part of this work delves into a dysmorphia question,” Atkins suggests. “Or at least a heredity of loathing of one’s body, which is certainly part of wanting to use avatars, if I’m honest. I want to perform in all these things, but I don’t like my body. That’s sort of from my mother, and I know that her relationship to her body is sort of from her mother. It’s a pathology of some kind.”

That pathology certainly makes itself present in the new work, which is Atkins’s first video to include a voice other than his own. There’s a touching moment, in “The Worm,” when Atkins’s mother recalls dressing up in costumes to get her parents’ attention. “It was really to get some sort of, um, response, I suppose,” she says cautiously, while Atkins’s reactions appear on a waxy digital marionette. “But also to maybe become, err, another completely different character.”

Like mother, like son. “The reason that I want to use this tech is that it short-circuits something,” he says. “The point of this must be that one can see things through it that would not be available otherwise. Or else I’d just film me talking to my mum.”