Gerardo Gonzalez came to cooking through birria — a meaty stew often piled into tacos and quesadillas — but the version that intrigued him, when he’d happened upon a recipe for it online, was meatless and instead called for dried hibiscus flowers. He was already familiar with the ingredient, known as flor de jamaica in Mexican kitchens and sorrel in West Indian ones, from having grown up drinking agua de jamaica, an iced herbal tea, in his native San Diego, but he found that, when soaked and simmered in stock, the purple blooms became plump and slack, their flavor at once floral and earthy.

Since then, the chef, 38, formerly of El Rey and Lalito in downtown Manhattan and now the director of food and culture at the Palm Heights hotel on Grand Cayman, has sought all kinds of savory applications for the flower, whether in a bright chutney — served with green mole and feta for a pop-up at the now-shuttered Brooklyn restaurant Saltie — or stuffed, alongside chorizo, into Spanish cuttlefish. He’s also continued to tinker with that original birria recipe, despite being met with skepticism by one member of his Mexican-American family. “I was explaining to my grandmother that you can make birria with hibiscus flowers, and she was very adamant that you could not eat the flower at all,” says Gonzalez with a laugh. Undeterred, he was happy to find that it’s a plant he can buy fresh on Grand Cayman, where sorrel drink — a deep wine-purple brew of sorrel, ginger, cinnamon and sugar, served cold and often spiked with rum — is particularly popular during the winter holidays. 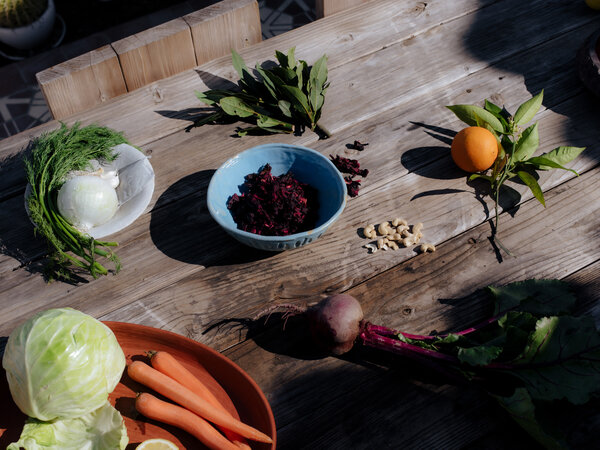 The current iteration of Gonzalez’s vegetarian (and vegan) birria is rather borschtlike. He stews the hibiscus in a vegetable stock bolstered with a tea bag, beer and brûléed citrus to give the liquid a depth and body that doesn’t mimic, but instead offers an alternative to, the more traditional beef broth. And he tops the end result with a silky cashew crema in lieu of sour cream. It is, in part, a homage to the many meals that, until leaving New York City in 2018, Gonzalez enjoyed at the longstanding East Village kosher restaurant B&H Dairy, a place that shaped a lot of his thinking about food service. “There’s something about the counter and the dynamic of someone making your food in front of you, someone who remembers your name even though you haven’t been there in seven years,” he says. “Any time I stray from that, when I have to work in a kitchen that’s more formal, I think, Why am I doing this? Really I just want to interact with people and cook for them.”

That’s precisely what he did when Grand Cayman shut its borders on account of the pandemic last March, and Gonzalez began spending most of his time with a small group of friends who had been visiting the island and ended up staying put. “It’s weird to look back on that kind of thing fondly,” he says, “but it was a very special moment.” Essentially, the crisis created a sort of family that, in between preparing meals for local churches and Meals on Wheels, would cook and eat together. Among its members were Angela Dimayuga, who was testing recipes for her upcoming Filipinx cookbook; Jake Brodsky, the executive chef at the Palm Heights restaurants Tillies and Paradise Pizza; Pierre Serrão and Jon Gray of Ghetto Gastro; and the hotel’s creative director, Gabriela Khalil. “We did all these themed dinners, like Orthodox Easter or high tea,” says Gonzalez. “It was very communal and cinematic — we’d get all dressed up and eat at this deserted hotel.” One of the dishes the group enjoyed together was Gonzalez’s vegan borscht, served chilled. “Soup among friends is a nice vibe,” says Gonzalez. “It feels wholesome and intimate, with everyone eating from the same pot.”

3 carrots, peeled and grated on the large side of a box grater

4 garlic cloves, grated on a microplane

1. In a large pot, heat the olive oil over medium-high heat. Slice the orange into 4 thick slices and the lemon into 3 thick slices, removing any loosened seeds. Place the citrus slices flat on the bottom of the pot, caramelizing them to get a nice brûlée. Reduce to medium heat. Once the citrus has blackened, remove the lemon slices and add the onions over medium-low heat.

2. Season and slowly sweat the onions with the orange slices. After a few minutes, the onions will go translucent while picking up the color of the citrus bits at the bottom of the pot. Once the onions are soft, add the minced garlic and sweat until soft.

3. Repeat this process with each vegetable in the order in which they’re listed above, adding them one at a time and seasoning with salt with every new addition. Once all the vegetables are nicely softened and mixed, add the turmeric, bay leaf and hibiscus. Cook until the flowers are also softened, then add the beer and let it reduce until the hibiscus has absorbed most of it.

4. Add the vegetable stock, bring it to a boil and then reduce to a medium simmer. Put cover on pot and let it simmer for 25 to 30 minutes, stirring occasionally and adding the Earl Grey tea bag in the last 5 minutes. Taste and, if needed, finish with salt. Transfer dish to an ice bath to chill, then place it in the refrigerator to be served later.

5. For the cashew crema, soak whole raw cashews in water overnight. The next day, remove half of the soaking liquid. Place the soaked cashews and remaining liquid in a high-speed blender and add the vinegar. Blend on high heat until fully emulsified, fluffy and smooth.

6. Pour the soup into a bowl with equal parts vegetables and broth. Dollop the cashew crema in the center, drizzle heavily with finishing oil and top with fresh cracked pepper and large piles of fresh picked dill stems and leaves. Serve very cold.