Introducing the BuzzFeed News newsletter JPG — this weekly newsletter will feature the most powerful images from around the internet, as well as behind-the-scenes exclusives from renowned photographers and our hard-hitting photo stories.

Following World War II, control of Germany was shared among four nations — the United States, the United Kingdom, France, and the Soviet Union. Germany’s capital of Berlin was divided between West and East, with the USSR maintaining control of the latter.

In 1961, in effort to keep the citizens of Eastern Berlin from relocating to the West, the USSR erected two concrete walls across 87 miles of Berlin, effectively segregating the East from the West and separating family, friends, and neighbors from one another. Between these two walls was a barren wasteland known as the “death strip” where armed guards monitored for defectors and many were killed attempting to flee East Germany.

In November 1989, following weeks of protests against the Soviet occupation of Berlin, Soviet premier Mikhail Gorbachev formally declared the opening of the border and the fall of the Berlin Wall. These pictures capture the emotional moments when Germany became whole again. 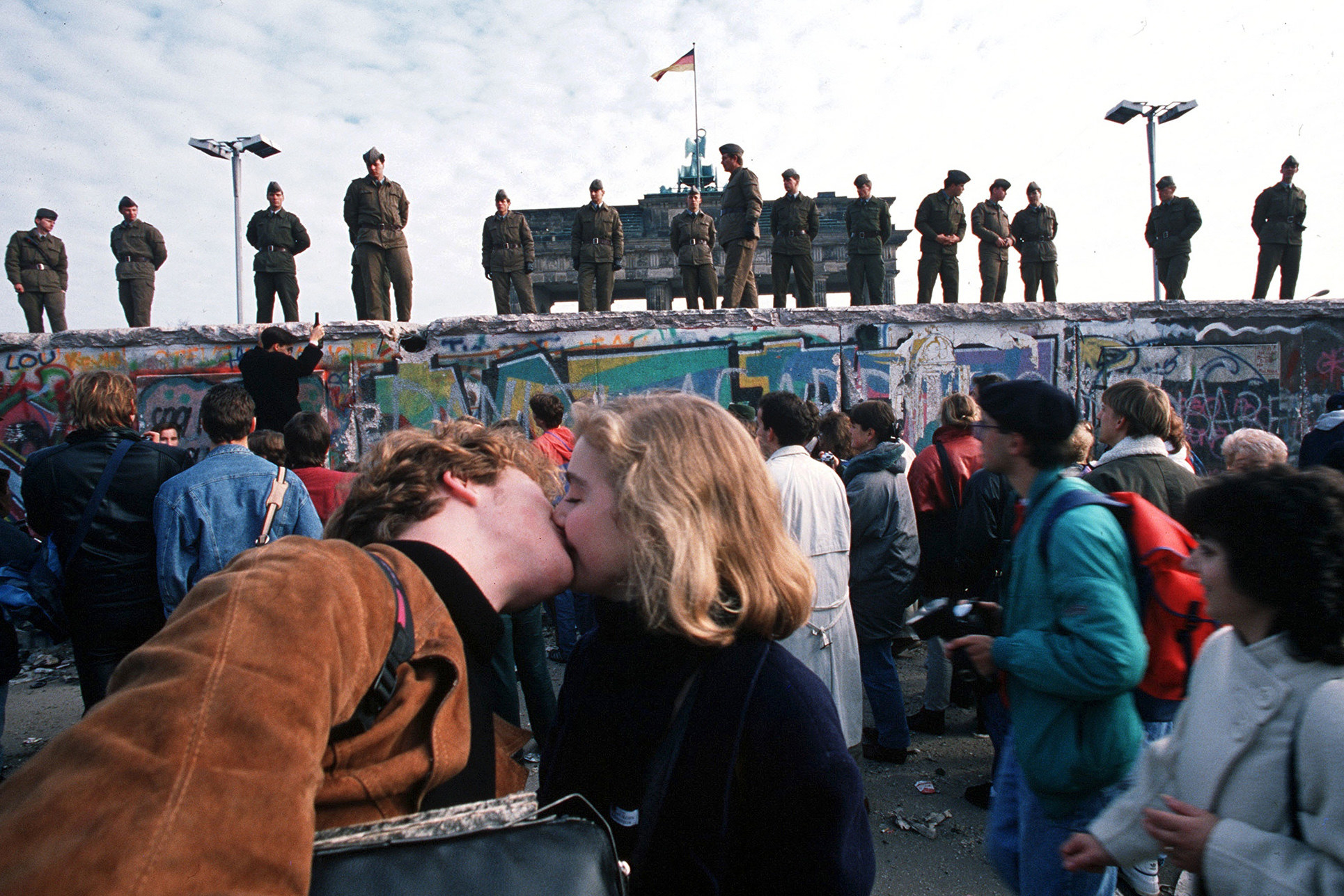 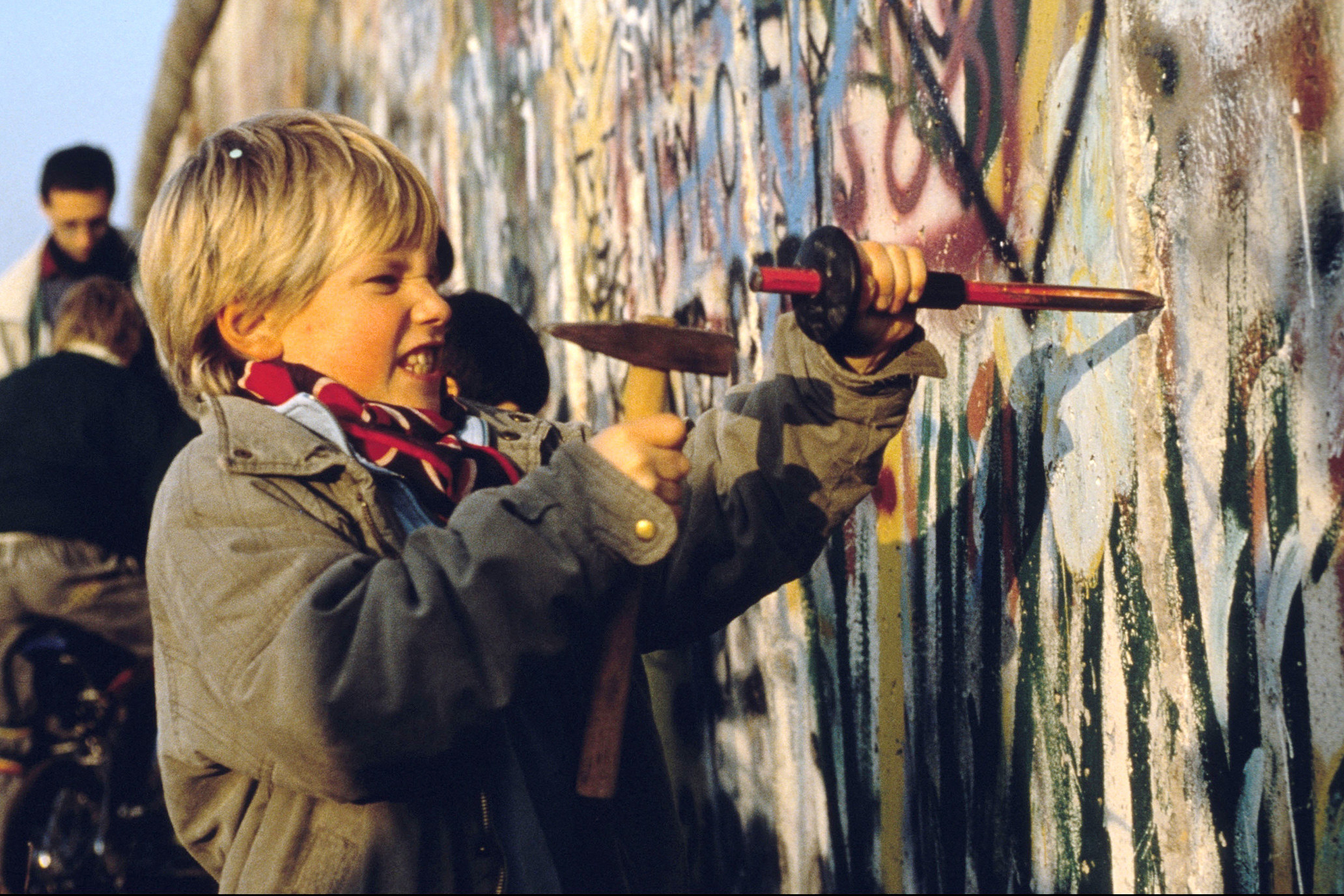 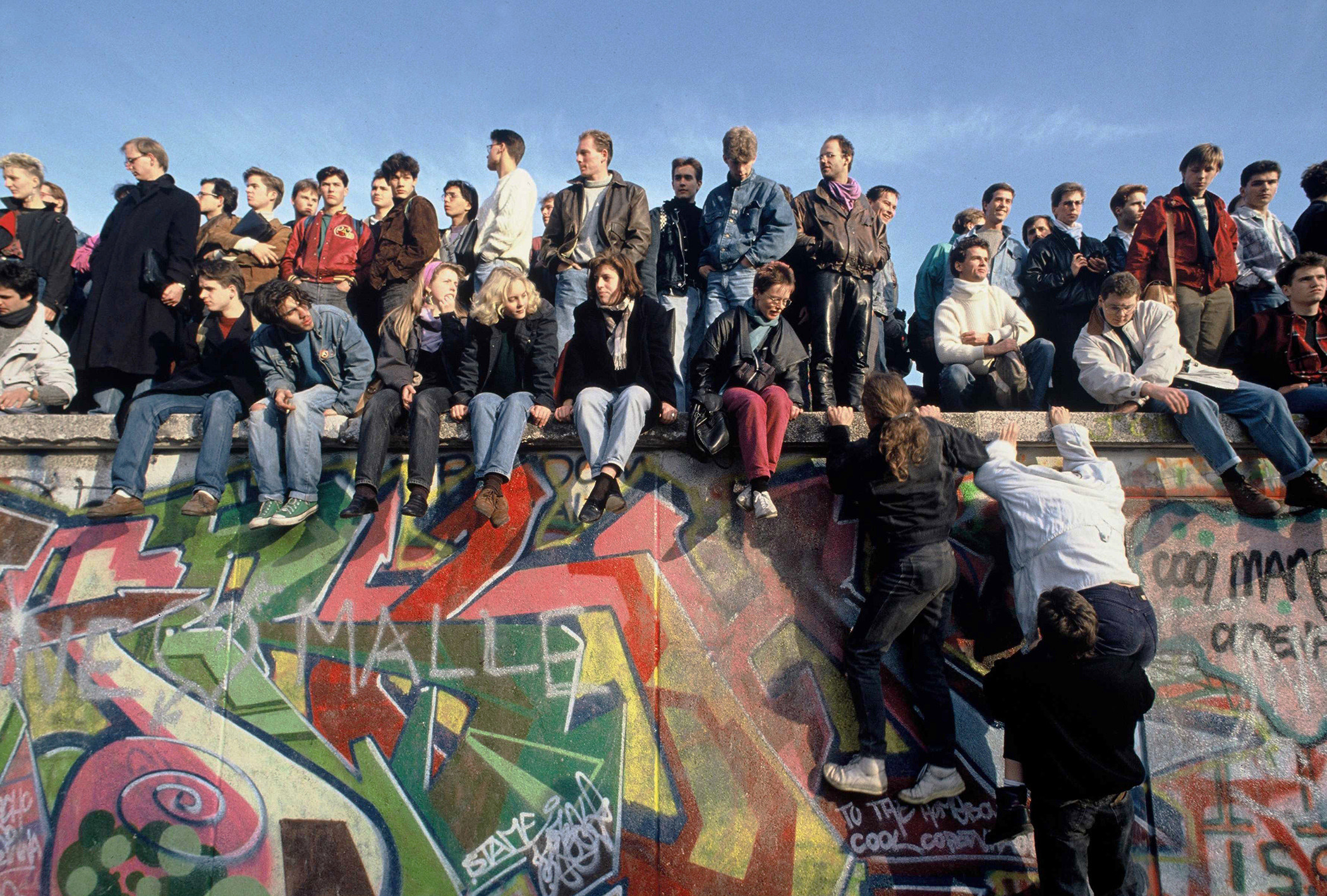 People climb onto the Berlin Wall on Nov. 10, 1989, the morning after the announcement by the East German government that they would start granting exit visas to East Germans wanting to go to the West. The announcement was misinterpreted as meaning the border was completely open, and East German border guards were unable or unwilling to control the thousands of people who rushed to the Wall. 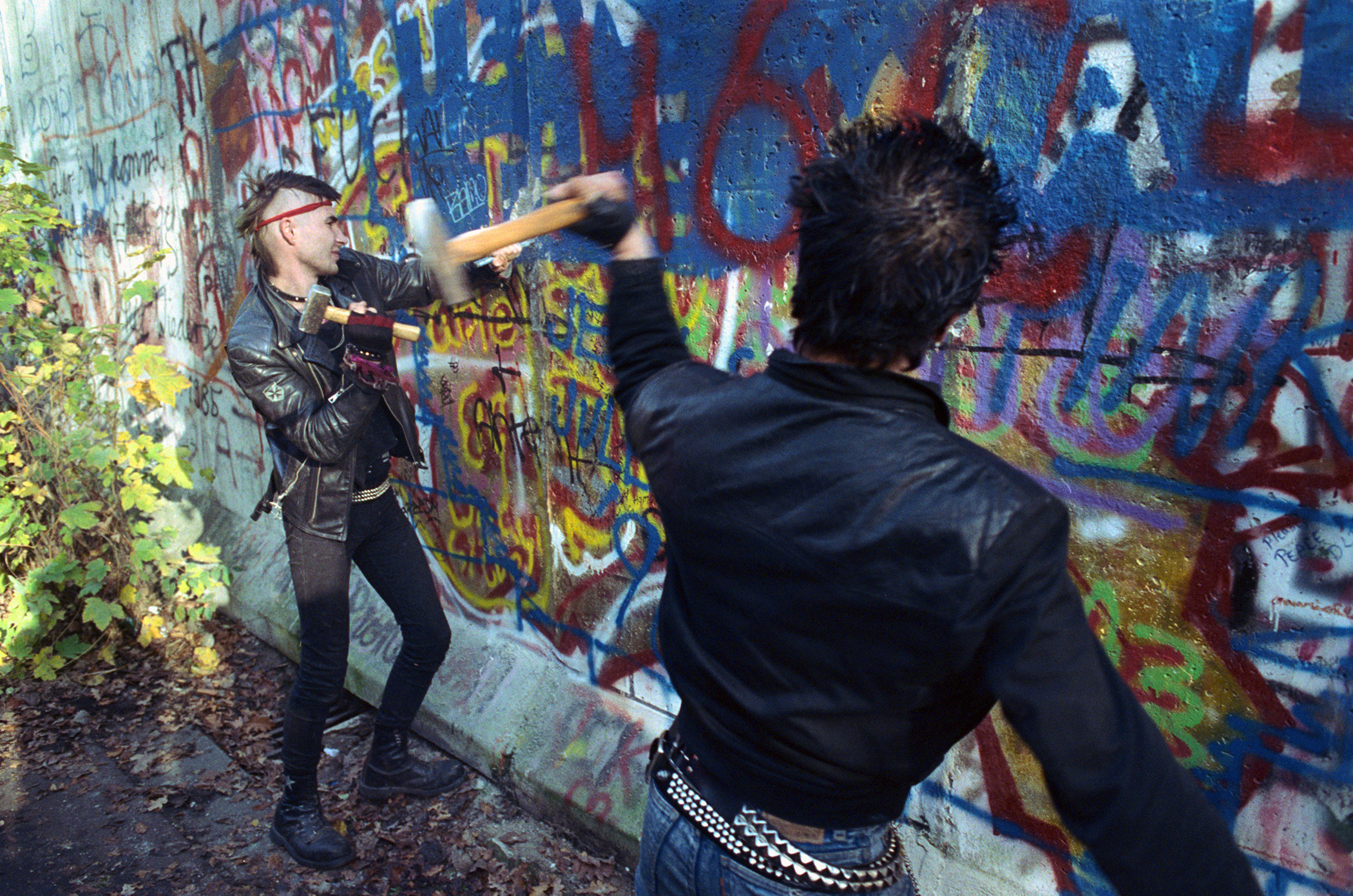 A pair of punk rockers chip away at the Berlin Wall in this undated photo. 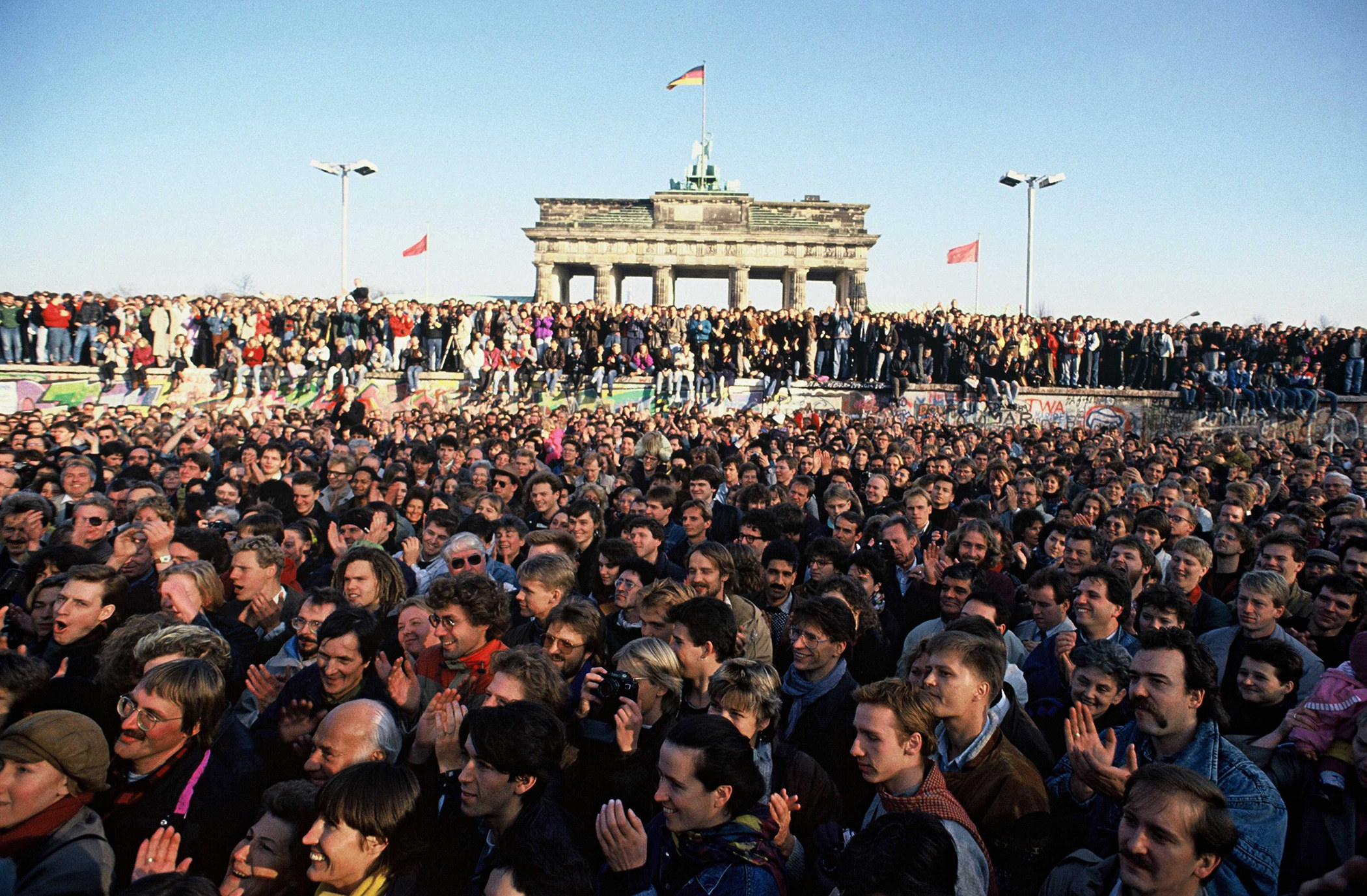 Thousands of people rushed to the Berlin Wall in the first few days after the opening of the border on Nov. 9, 1989. 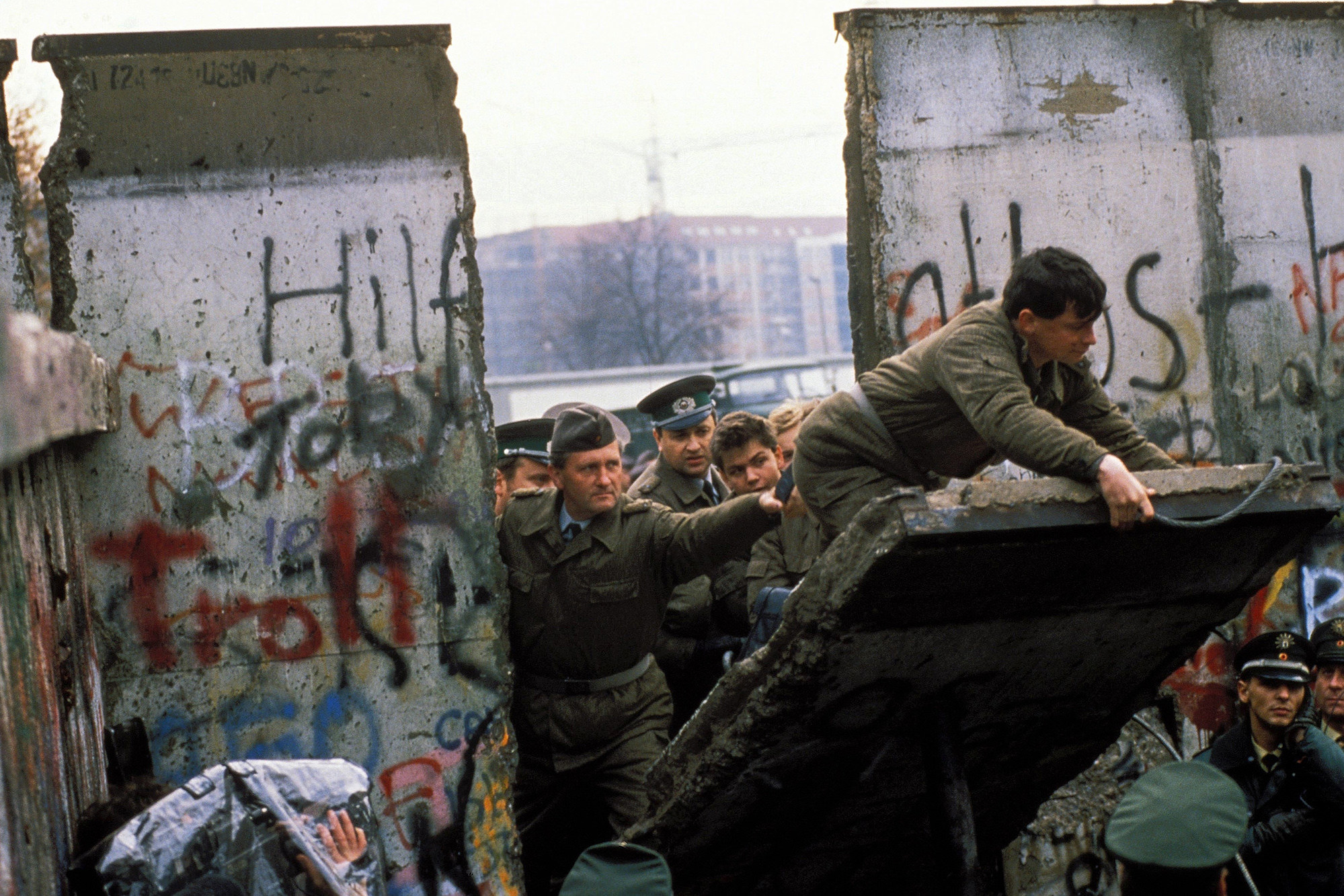 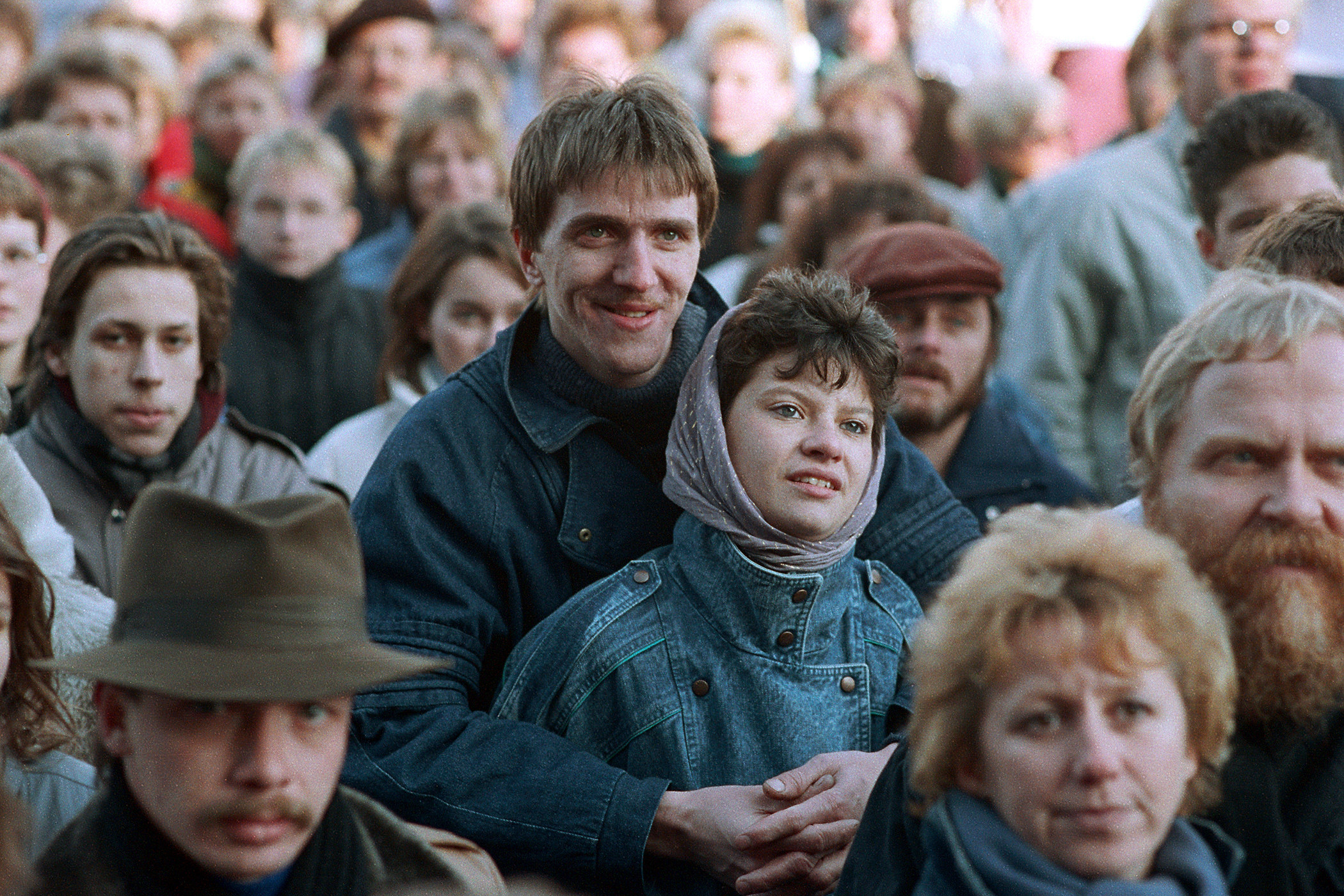 A couple embrace at the fall of the Berlin Wall. 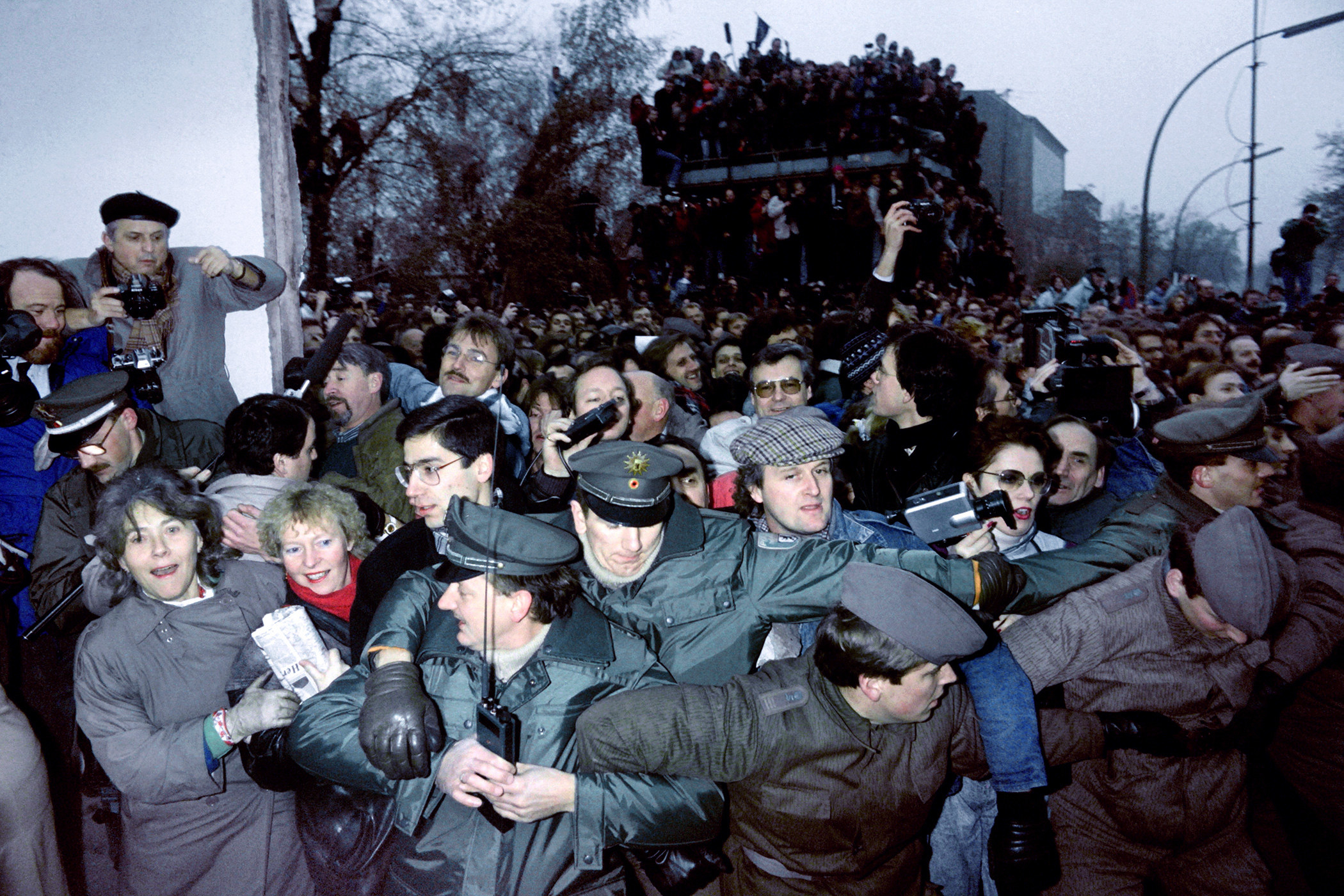 East and West German Police contain the crowd of East Berliners flowing through the recent opening made in the Berlin wall at Potsdamer Square, on Nov. 12, 1989. 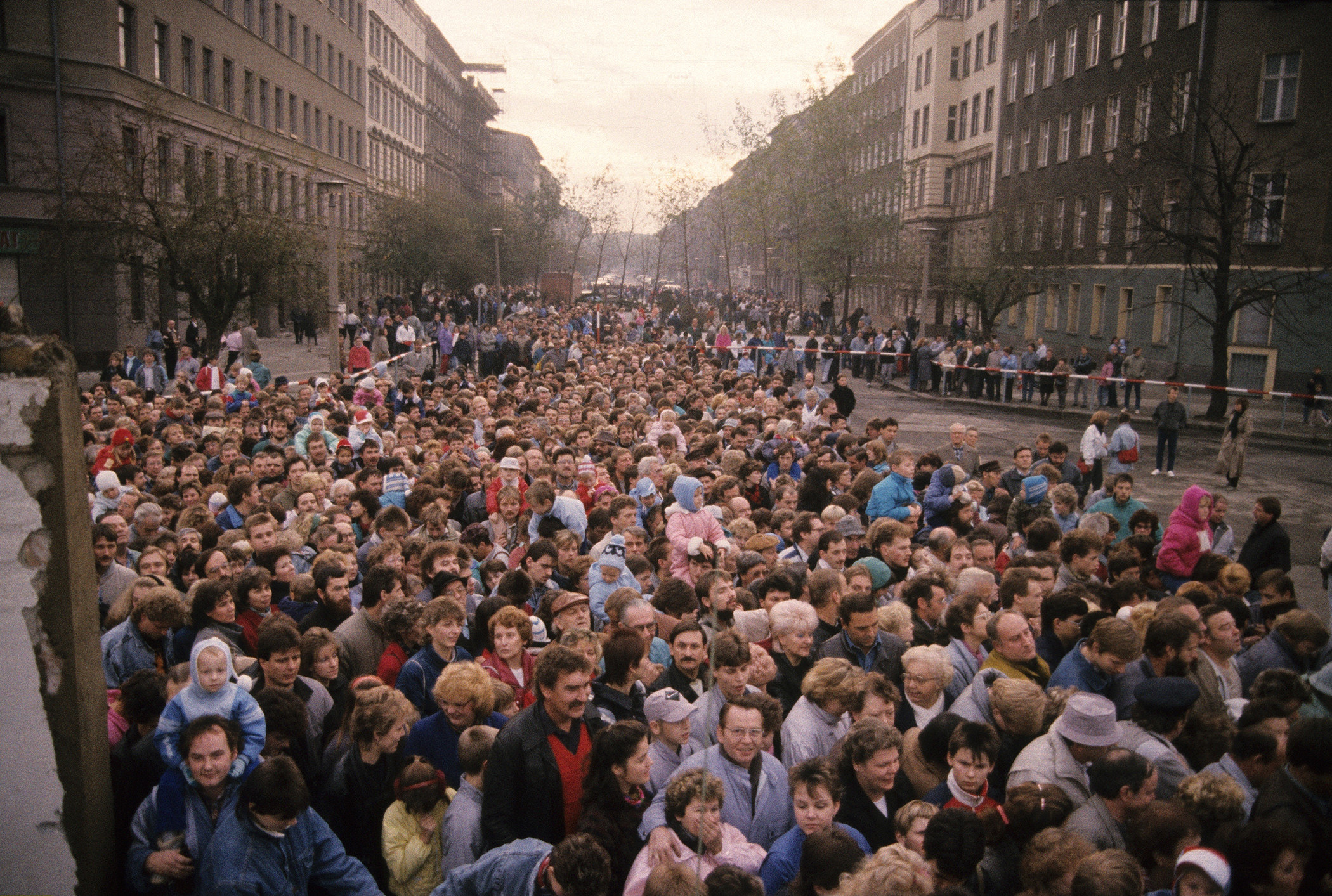 Opening of the border crossing at Bernauer Strassee. 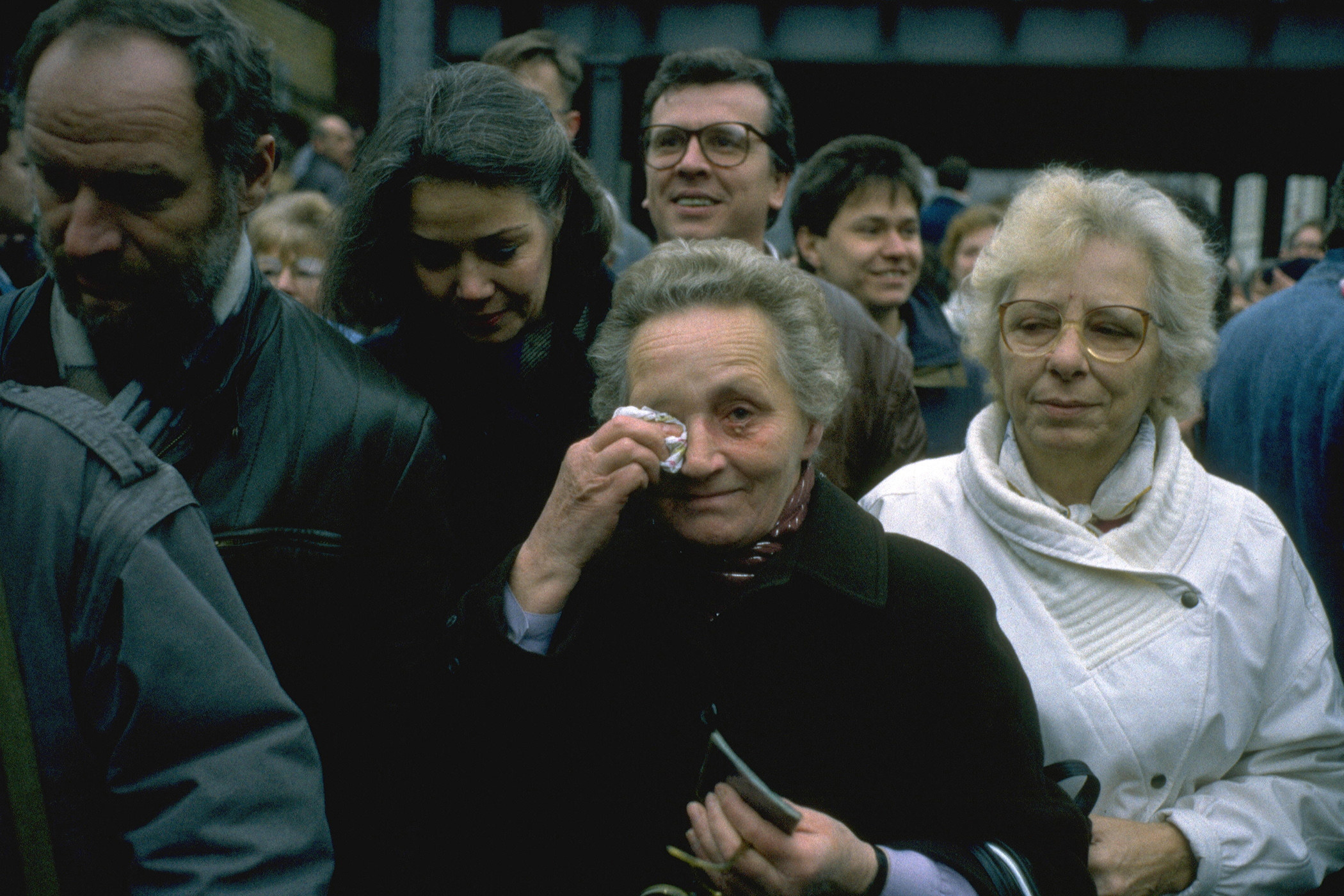 A crying woman dabs her eyes at the opening of the passage under the Wahlenstrasse bridge. 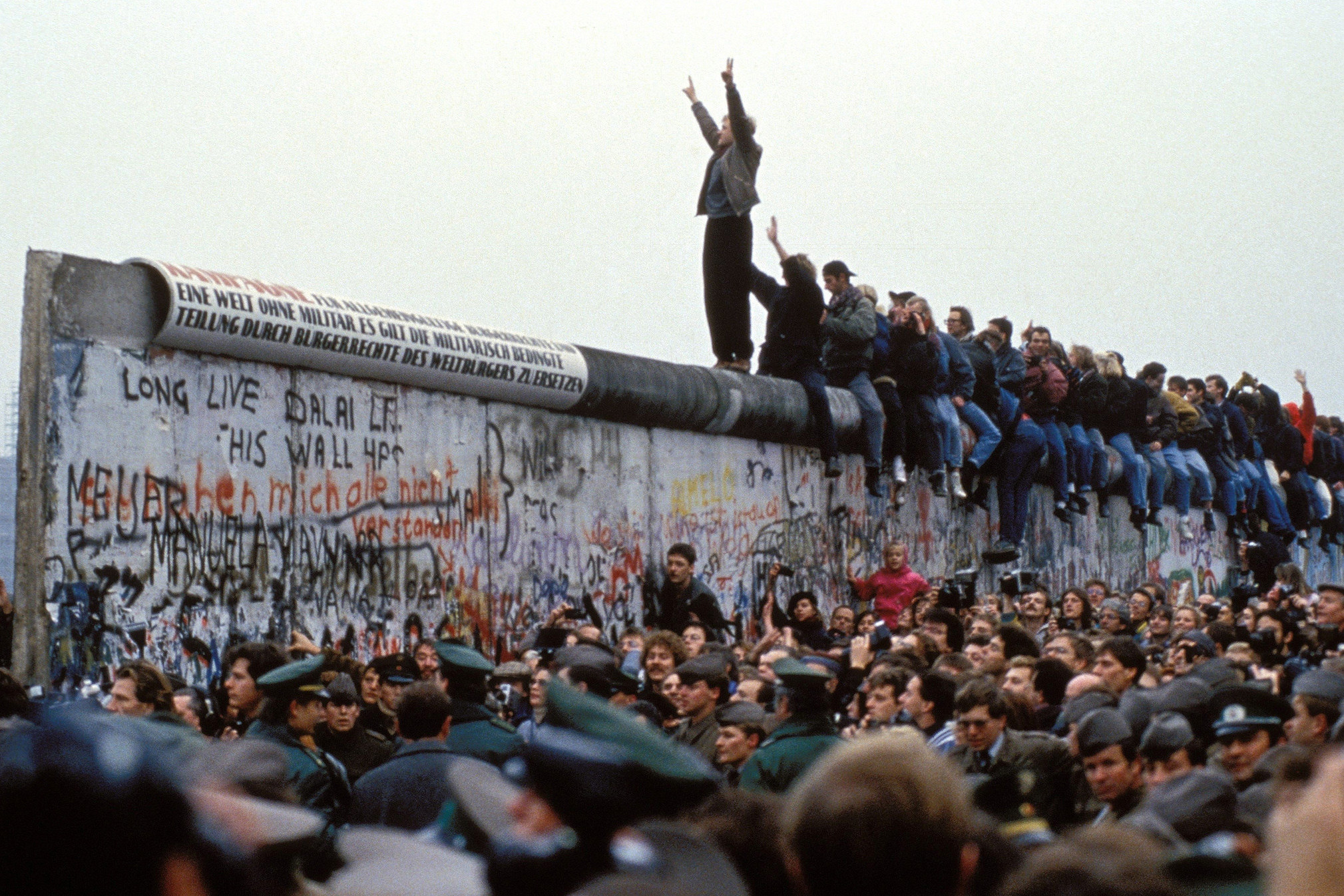 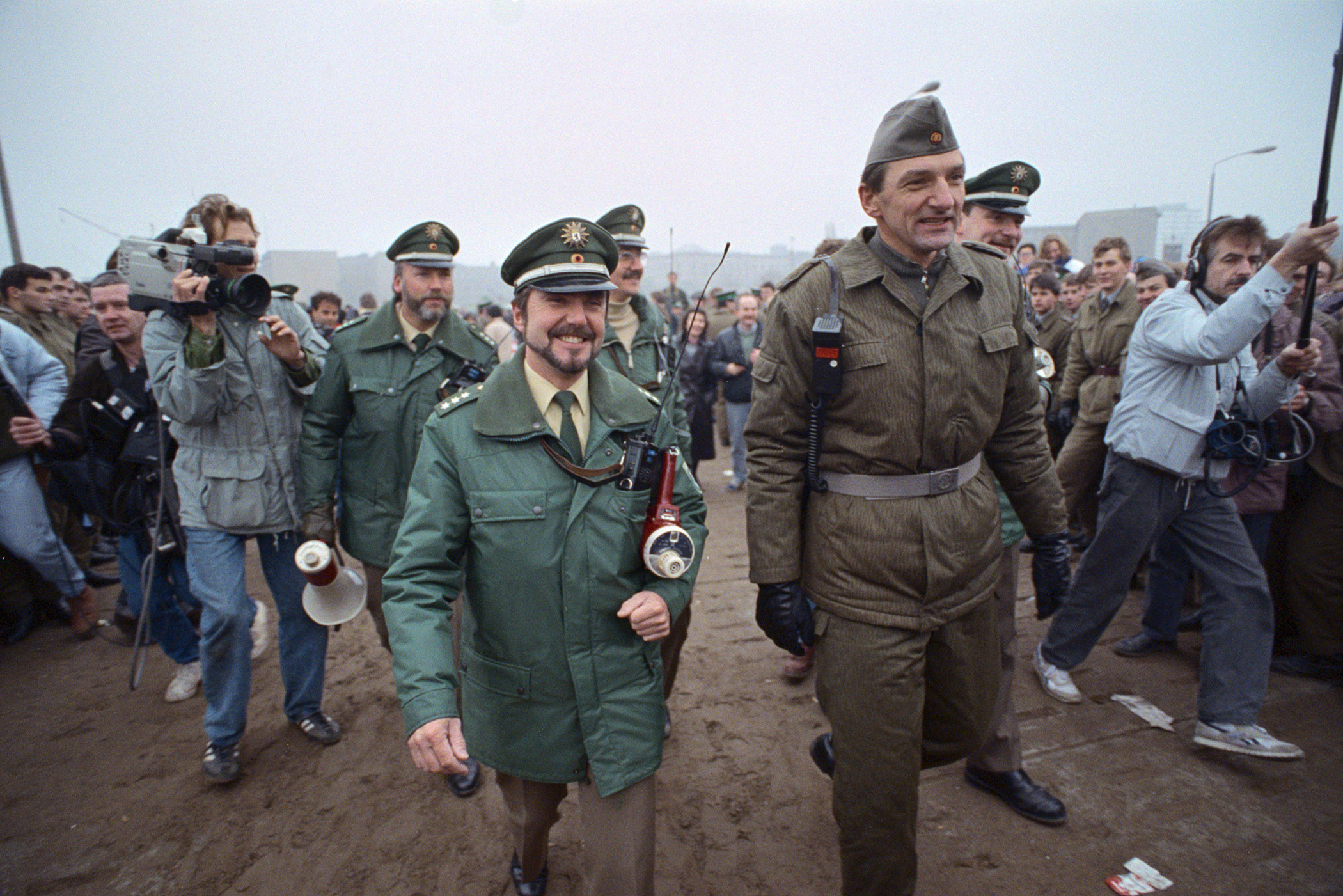 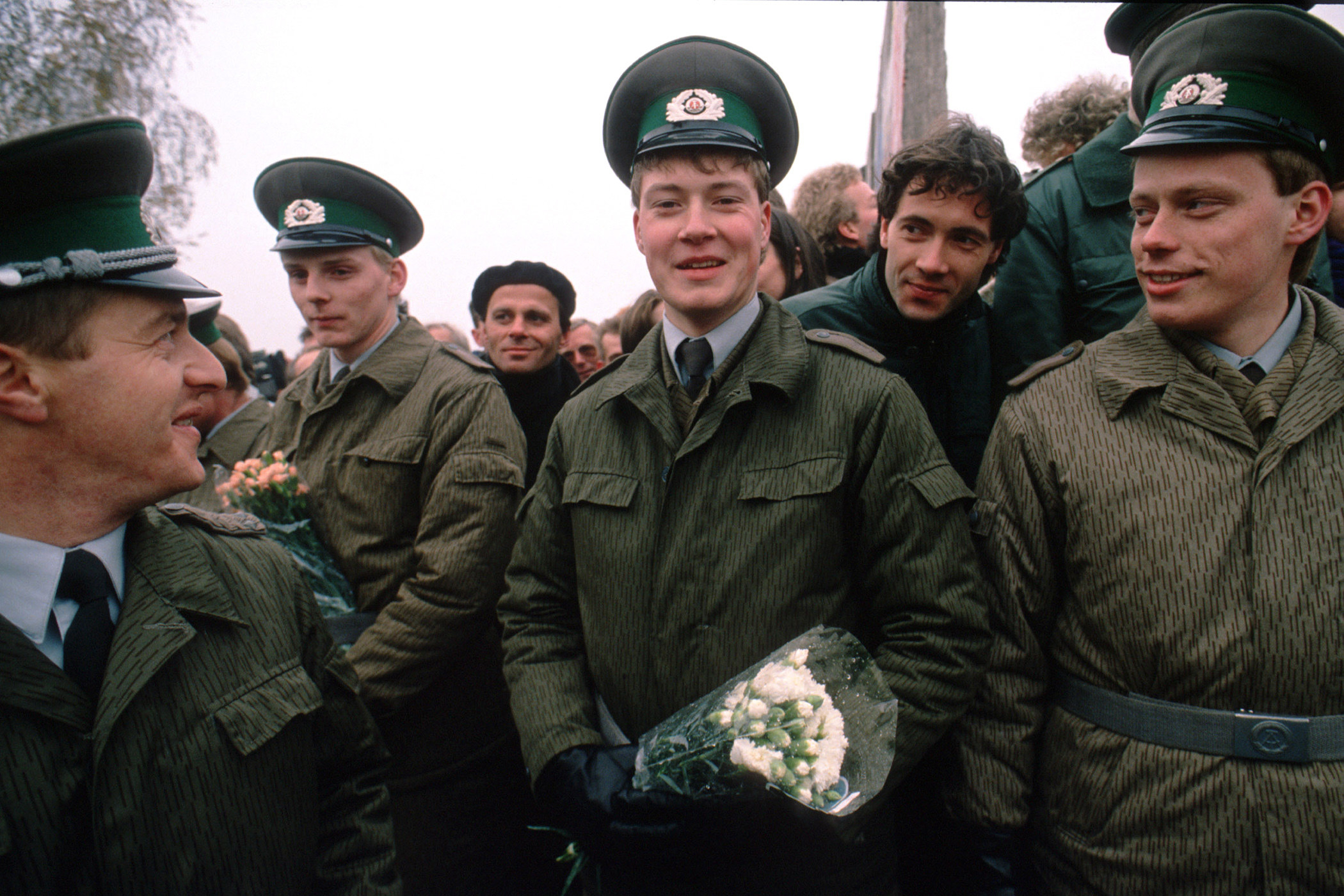 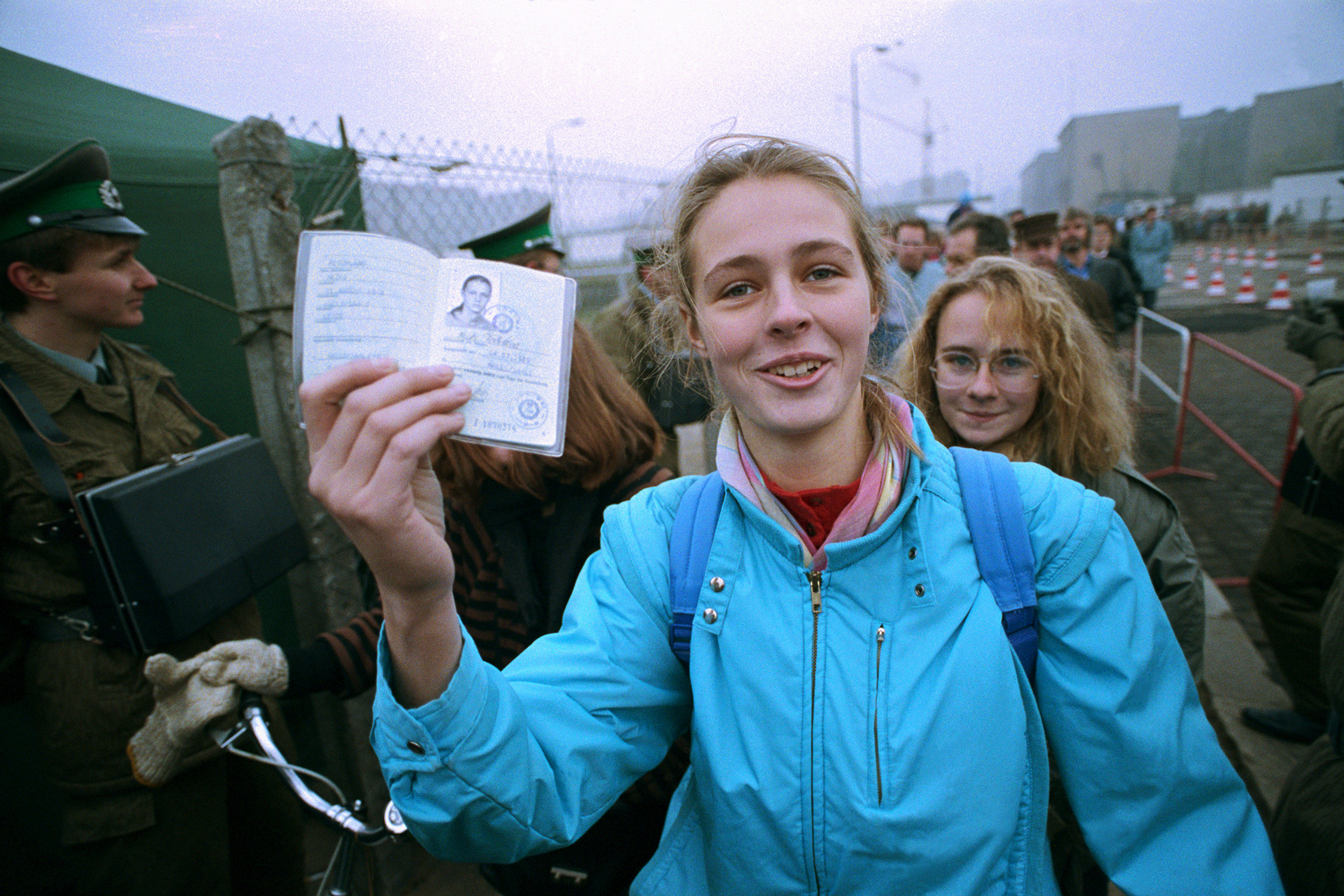 An East German woman crosses the border with her passport. 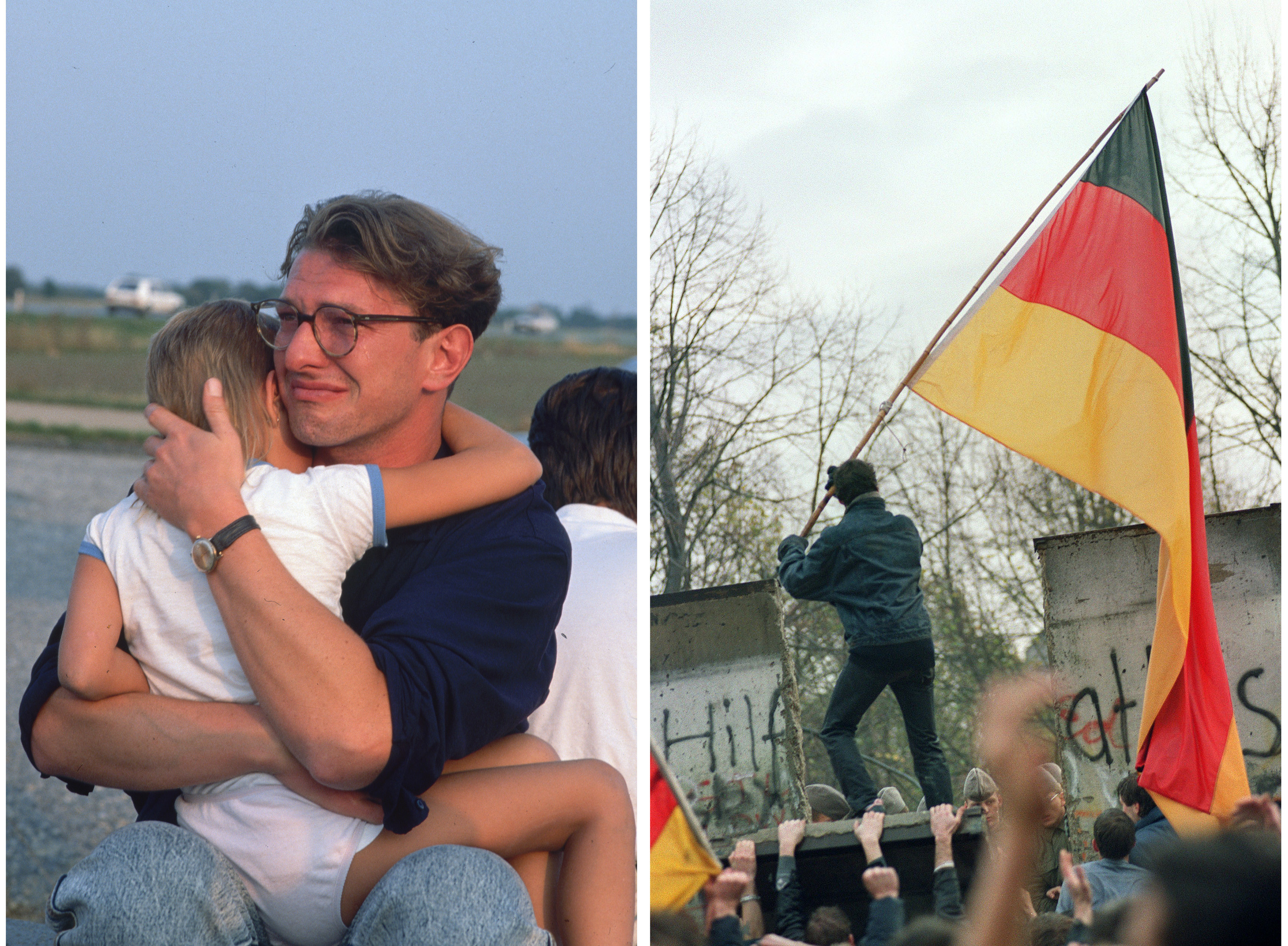 Left: An emotional East German man embraces a young girl at the Austrian–Hungarian border after its official opening. Right: A West Berliner prepares to hand over an FRG flag to East German guards through a portion of the fallen Berlin Wall near the Brandenburg Gate on Nov. 11, 1989. 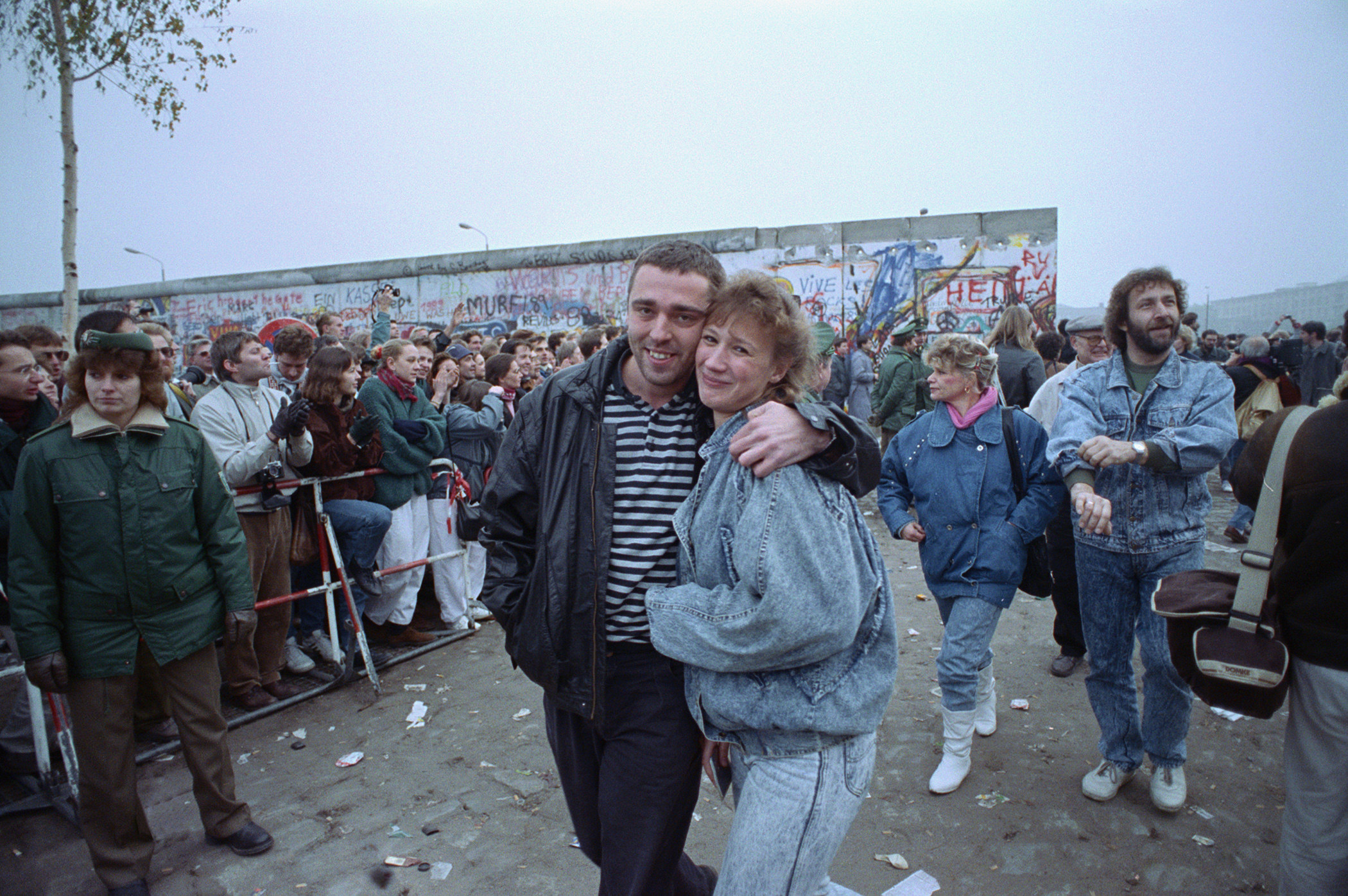 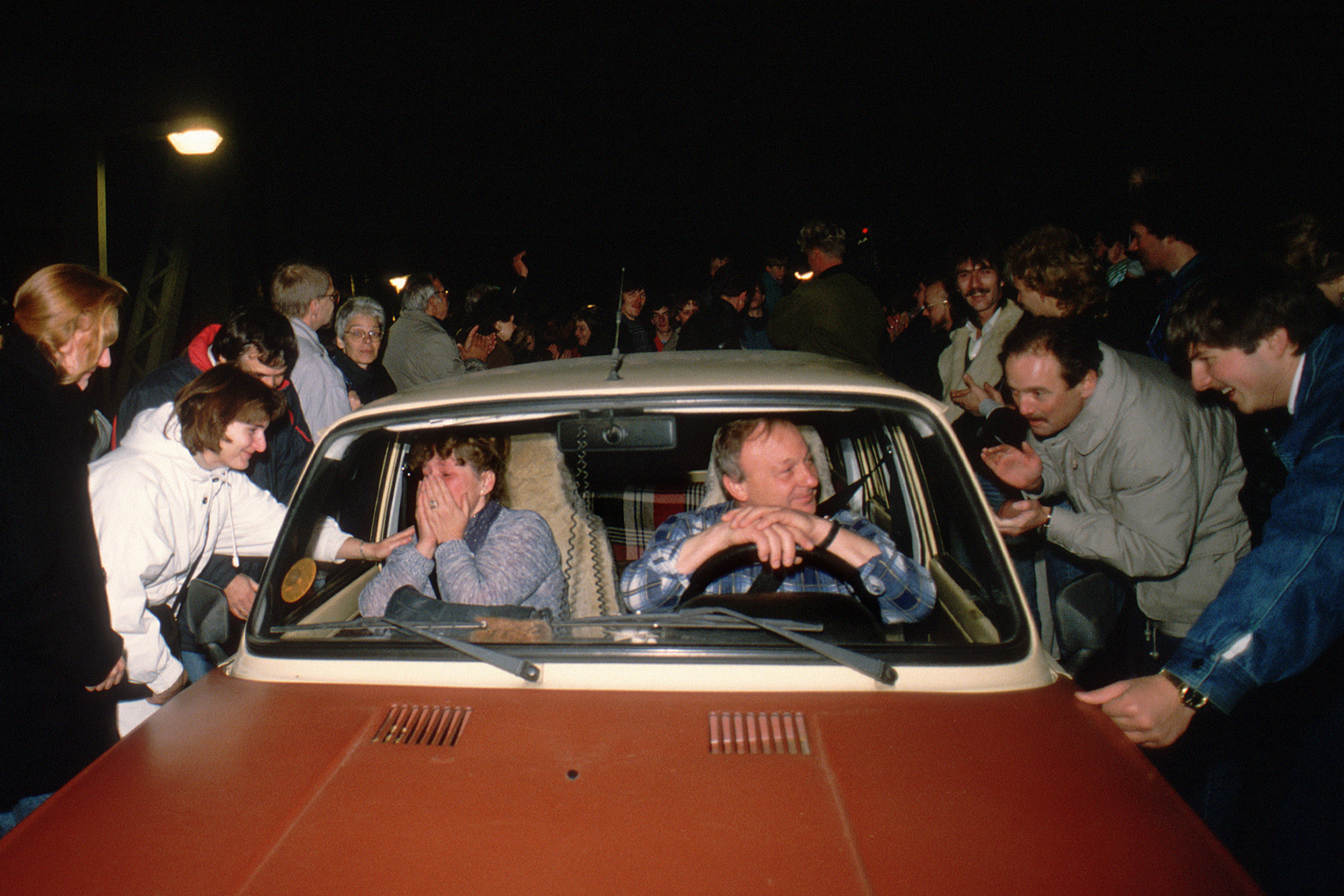 A family in a car is welcomed by people at the former inner-German border on Nov. 9, 1989. 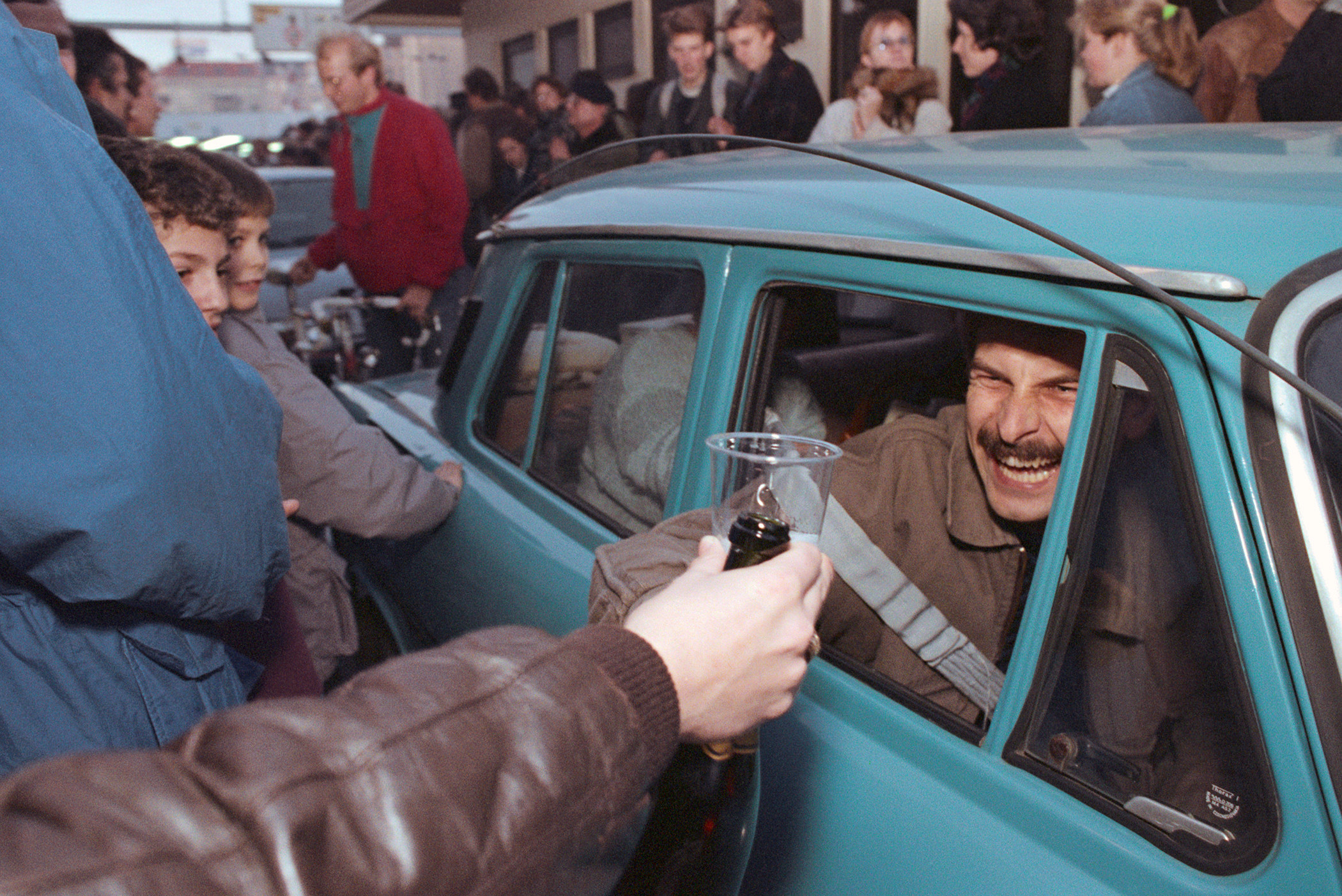 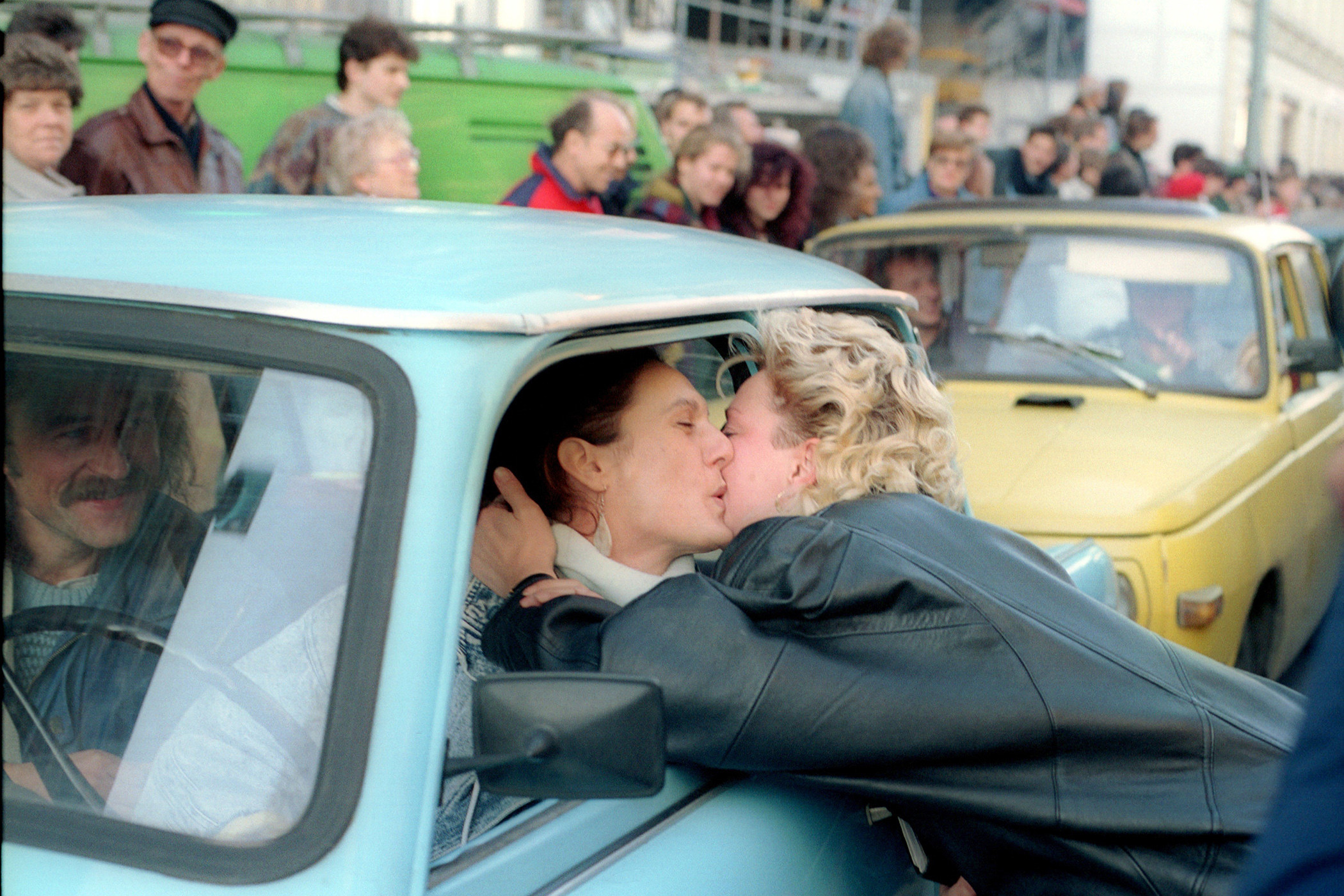 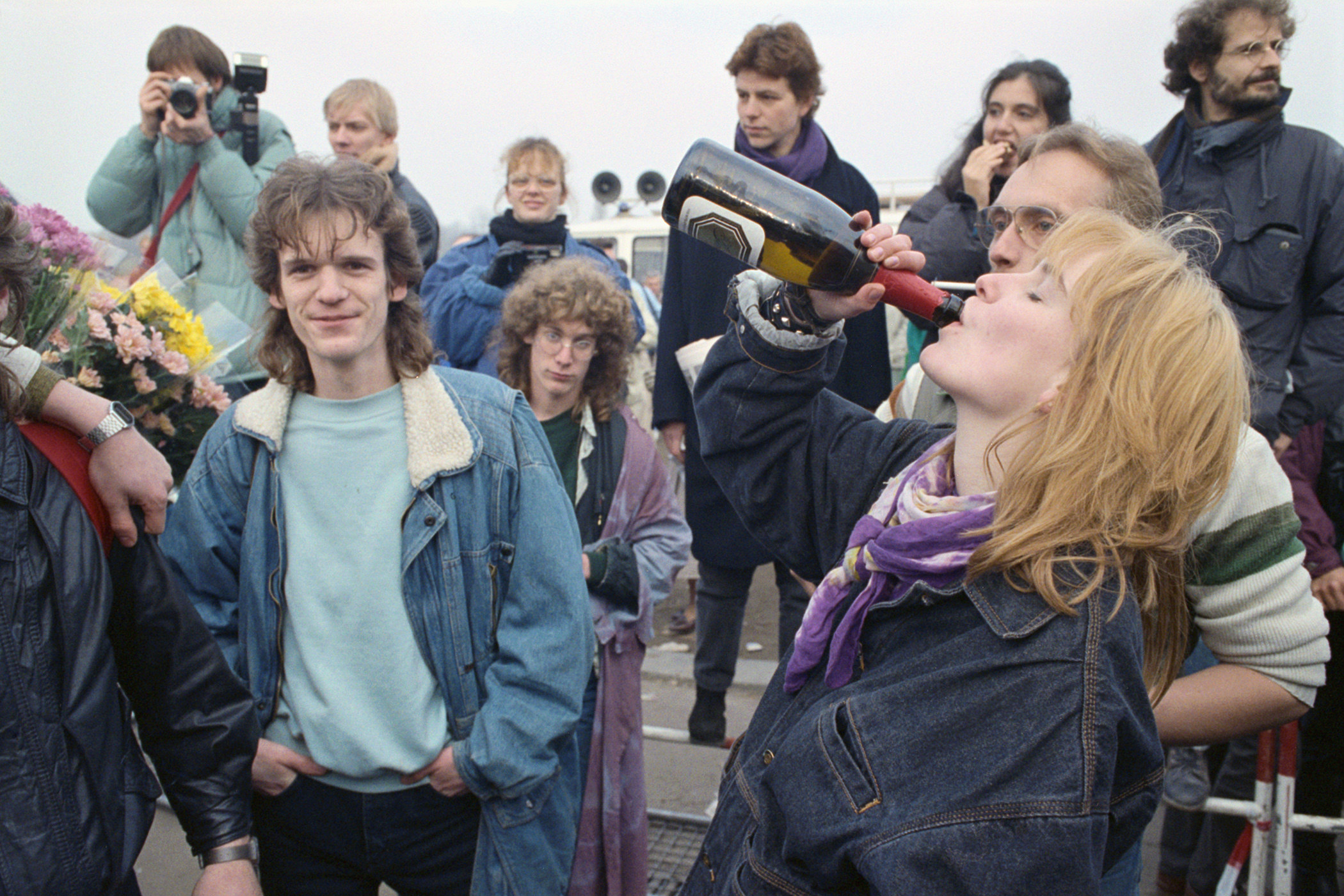 Germans celebrate at the opening of the Berlin Wall in November 1989. 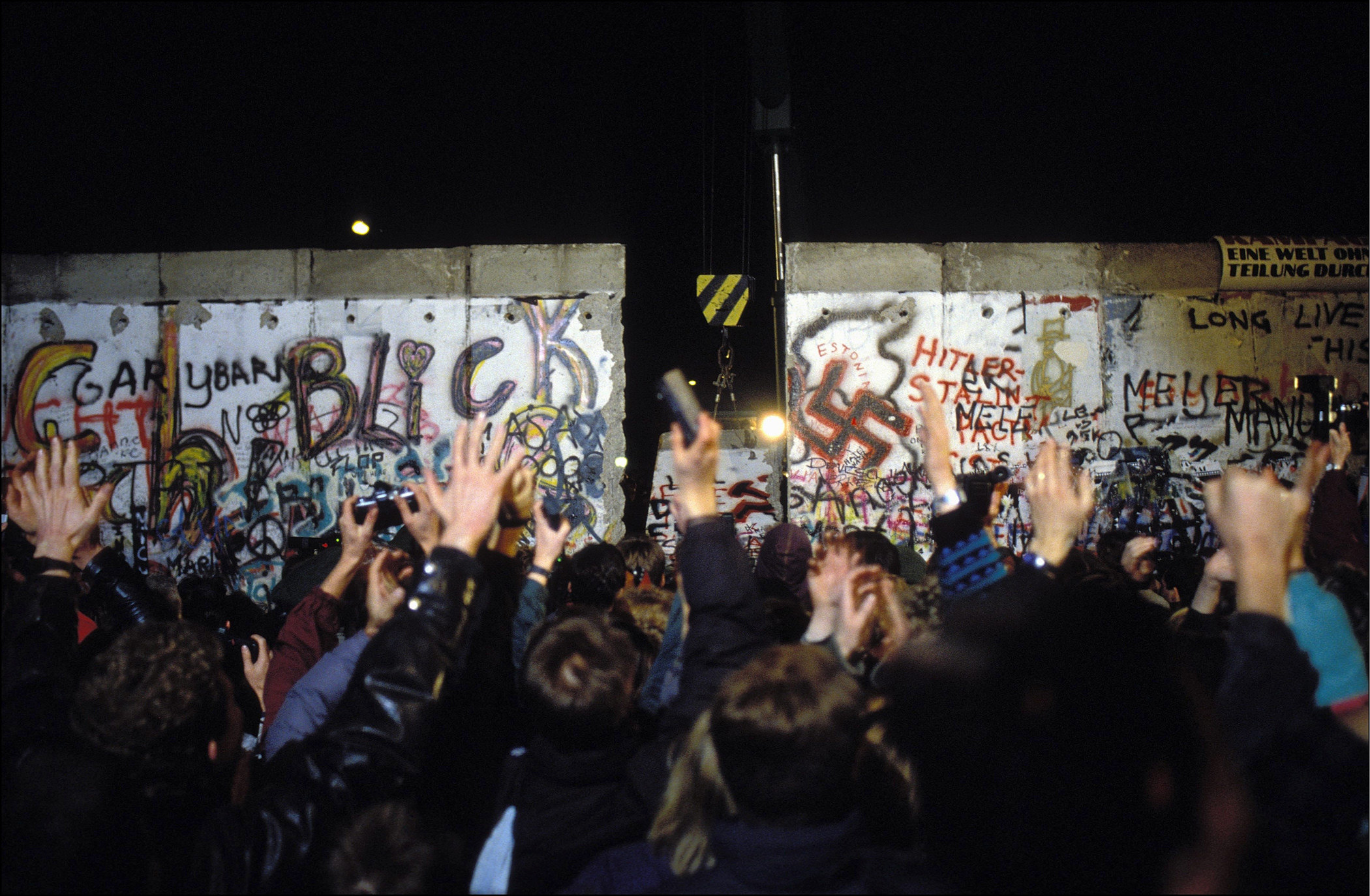 The Berlin Wall opening in November 1989. 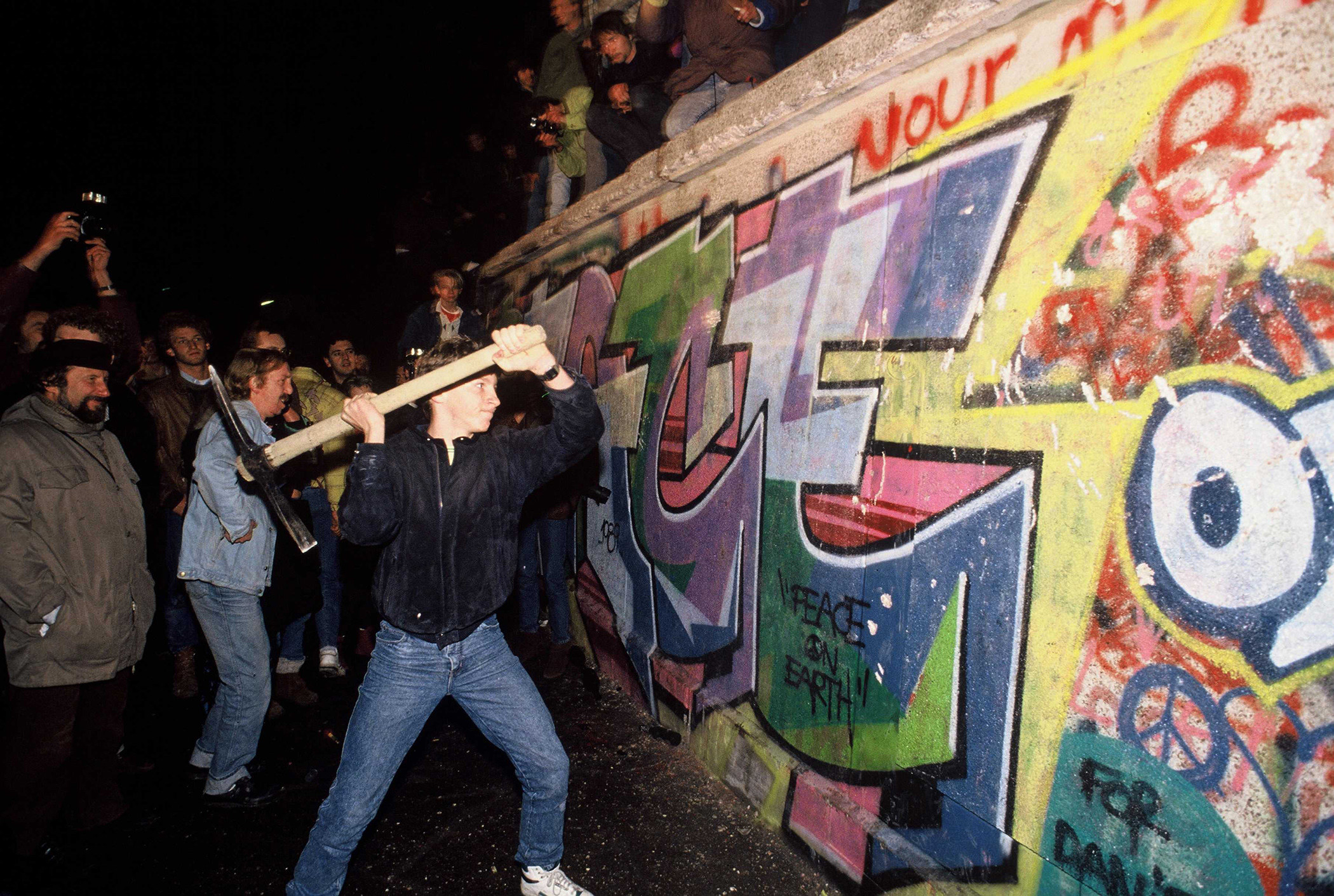 A man attacks the Berlin Wall with a pickax on the night of Nov. 9, 1989, as news spread rapidly that the East German government would start granting exit visas to anyone who wanted to go to the West. 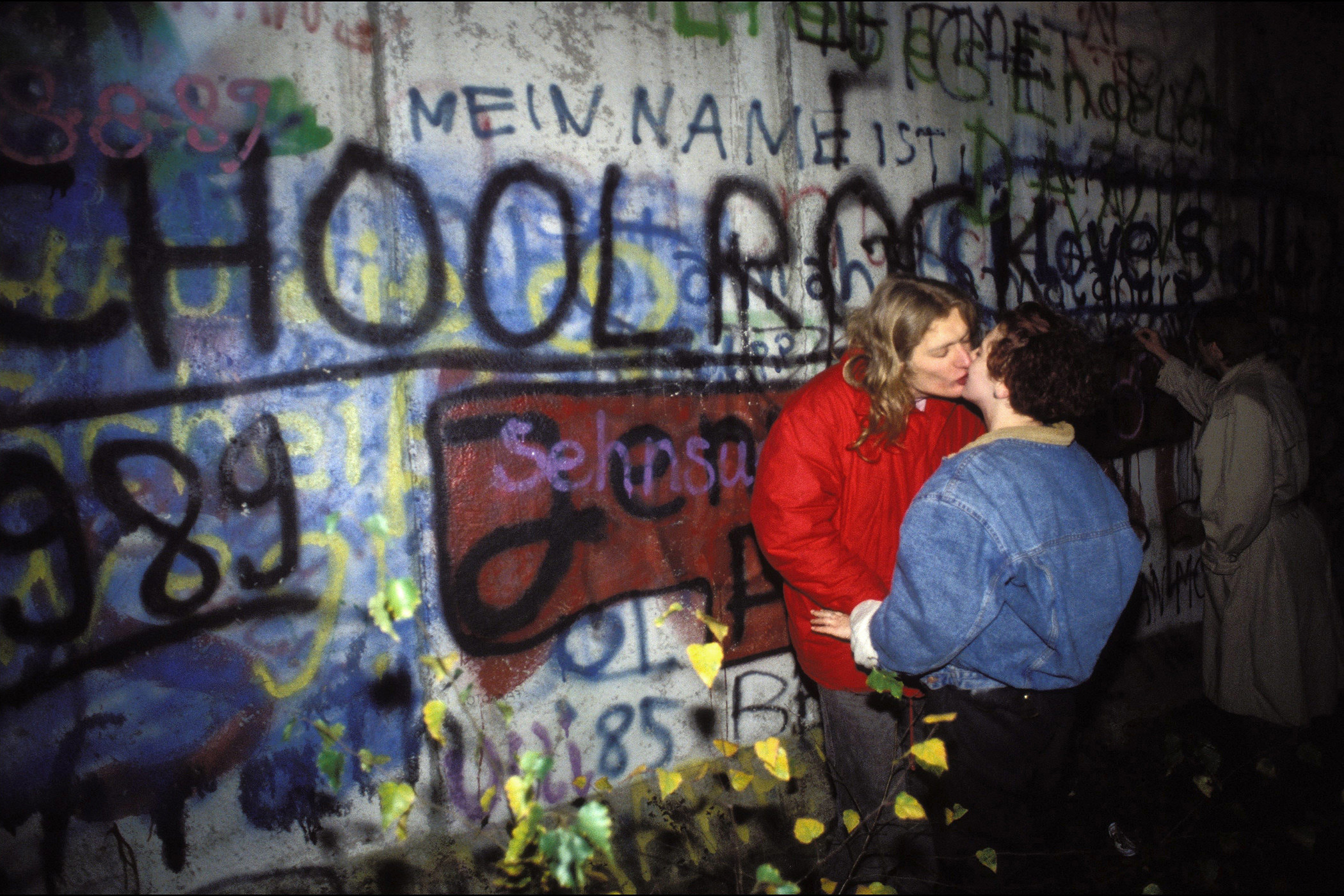 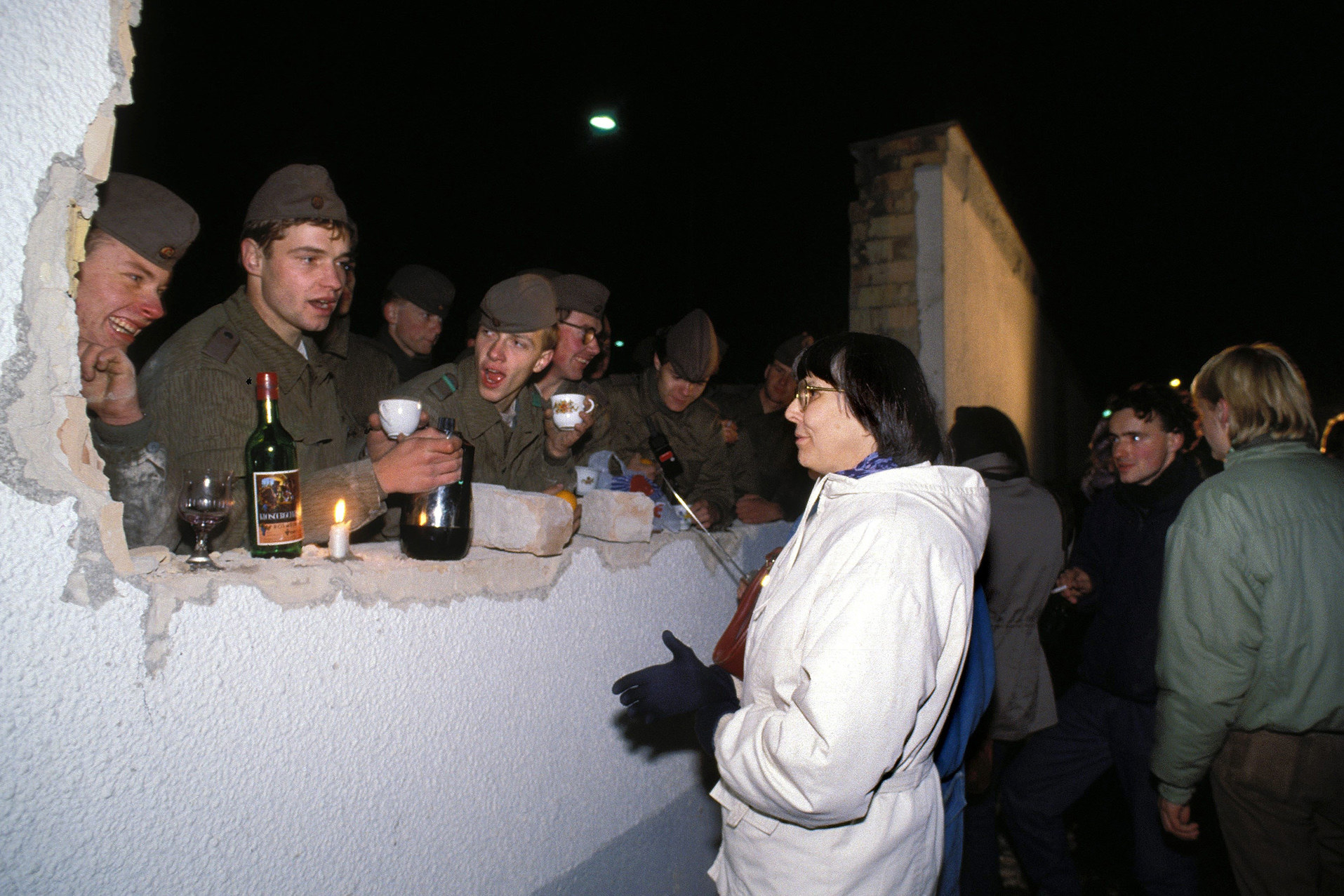 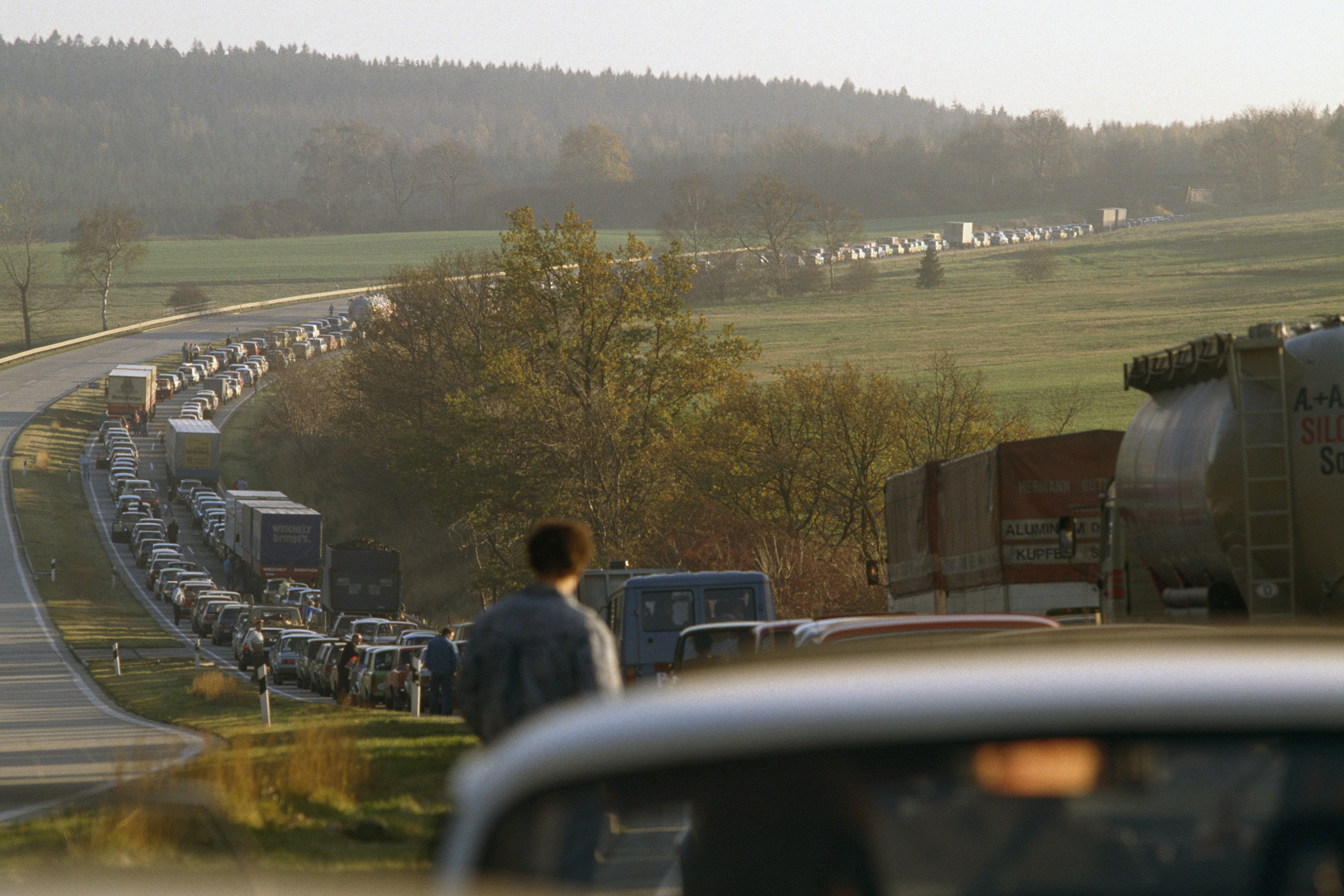 A traffic jam stretches along a highway near Leipzig, East Germany, as East Germans emigrate following the fall of the Berlin Wall.

Related posts:
Tags: Celebra, Here’s, How, People
Recent Posts
We and our partners use cookies on this site to improve our service, perform analytics, personalize advertising, measure advertising performance, and remember website preferences.Ok