Over the last year, eBay, the original online marketplace, has doubled down on its foothold in the world of sneakers by eliminating sneaker fees and launching its official Authenticity Guarantee service. Now, the platform has arguably its most expansive sneaker marketplace yet and look no further than the site’s classic Nike Dunk offerings as proof of this impressive collection of highly sought-after grails. With its new Authenticity Guarantee service, which claims it sells a pair of sneakers every 1.5 seconds, eBay is now providing meticulous multi-point inspections for all Yeezy, Jordan, Nike, adidas, New Balance, Asics, Vans, Reebok, Converse, and Puma brand sneakers, listed in the men’s or women’s athletic shoe categories, in new condition sold for $150 USD or more or pre-owned condition sold for $300 or more, meaning most Nike Dunk transactions will receive an Authenticity Guarantee.

The Nike Dunk has become such a focal point of not only sneaker culture but also men’s fashion at-large, with links to skateboarding, streetwear collaborations and runway appearances. The second most-popular shoe to debut in 1985, after the Jordan 1, the Dunk was never intended to be a flagship model but rather a college-centric basketball shoe. Designed for NCAA athletes and its respective fans, the Dunk was an attempt to capitalize on the collegiate leagues’ growing appeal. But, despite playing second fiddle to one of the most successful Nike sneakers of all time, the shoe took on a life all its own, quickly diverging from its intended audience and finding new life in a variety of subcultures. From there, the shoe pretty much faded out of the public’s eye, never quite hitting fever pitch but always making waves, especially in the hearts of sneaker aficionados. As of 2020 though, that’s all changed with the Dunk coming back stronger than ever, with Off-White collabs, Travis Scott cosigns and successful retros, it’s never been a hotter shoe on eBay. So without further ado, here are the best Nike Dunks currently available for purchase on the marketplace’s website through its Authenticity Guarantee service. 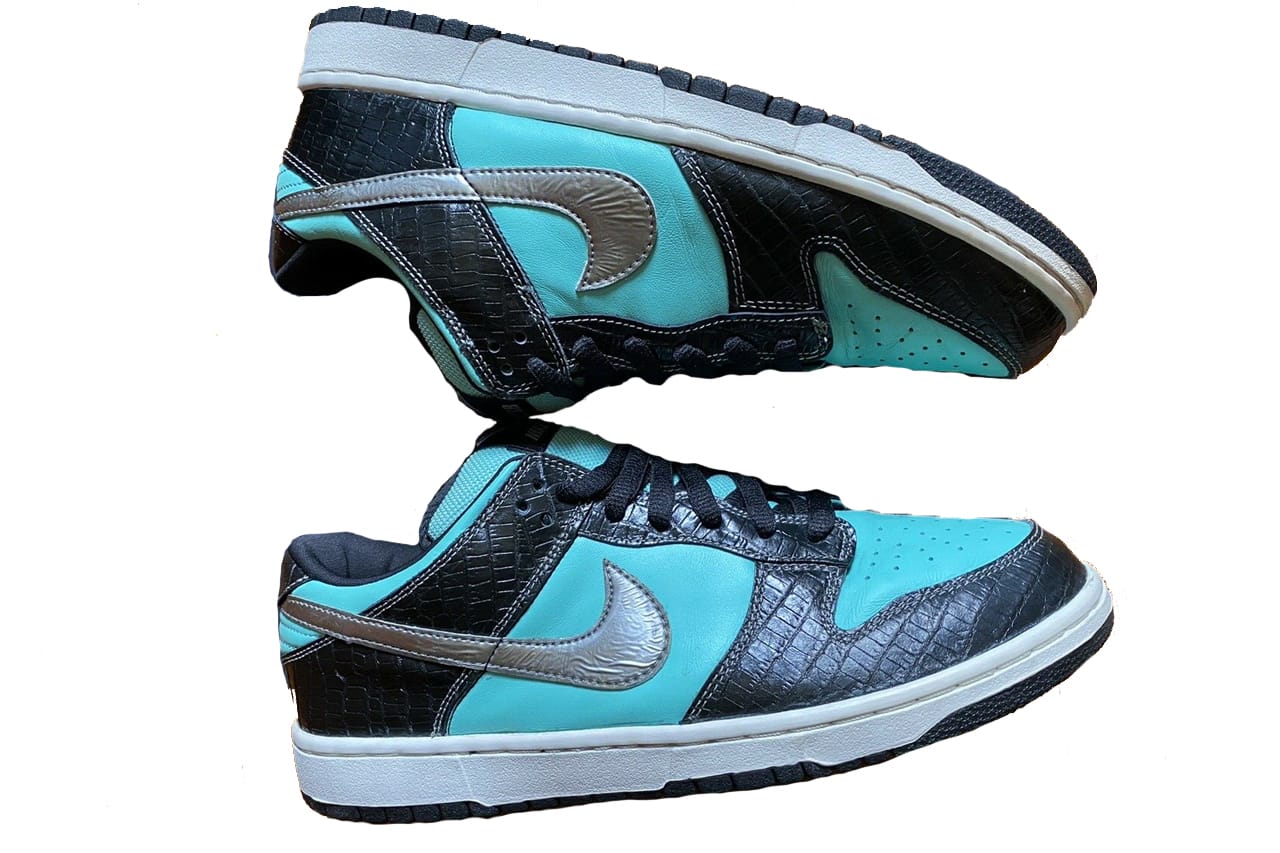 Releasing in August 2005 as part of the Team Manager series, the Diamond Supply Co. x Dunk Low Pro SB “Tiffany’” drew long lines and campouts at skate shops throughout the country. The leather upper is finished in Aqua and accented with a metallic silver Swoosh. The black leather overlays feature a crocodile-embossed texture and contrast white stitching. It is maybe the rarest dunk of all-time. 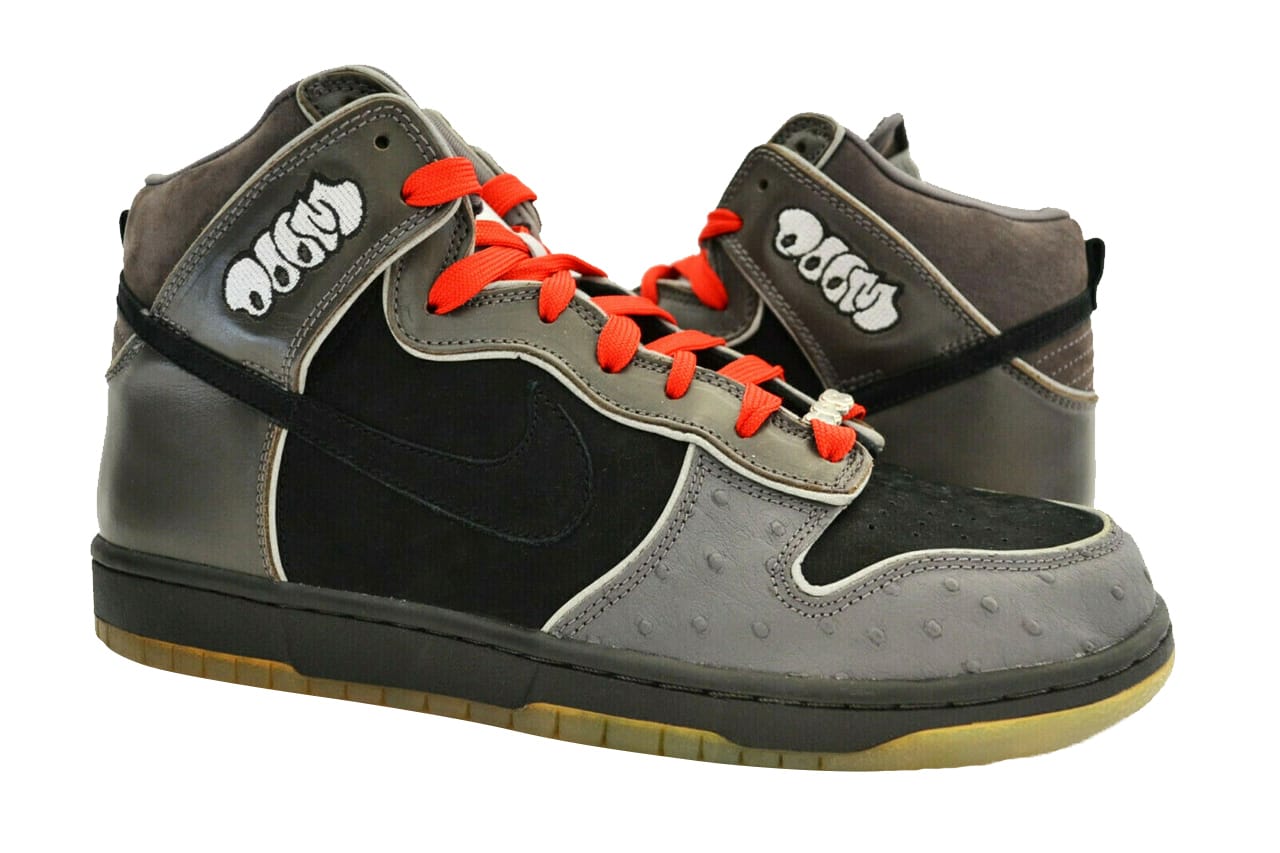 With the Dunk High SB Premium “MF Doom,” Nike SB joined forces with the acclaimed underground rapper. The high-top, released in July 2007, sports a black suede upper with Midnight Fog leather overlays, accented with reflective piping. ‘Doom’ embroidery appears on the collar, with a faux ostrich skin on the toe wrap. An MF Doom mask graphic can be found on the tongue tabs, while red laces offer a bold contrast anchored with ‘SPR’ and ‘VLN’ lace dubraes. Additional MF Doom artwork can be found on the sockliner, and again underneath the translucent rubber outsole. 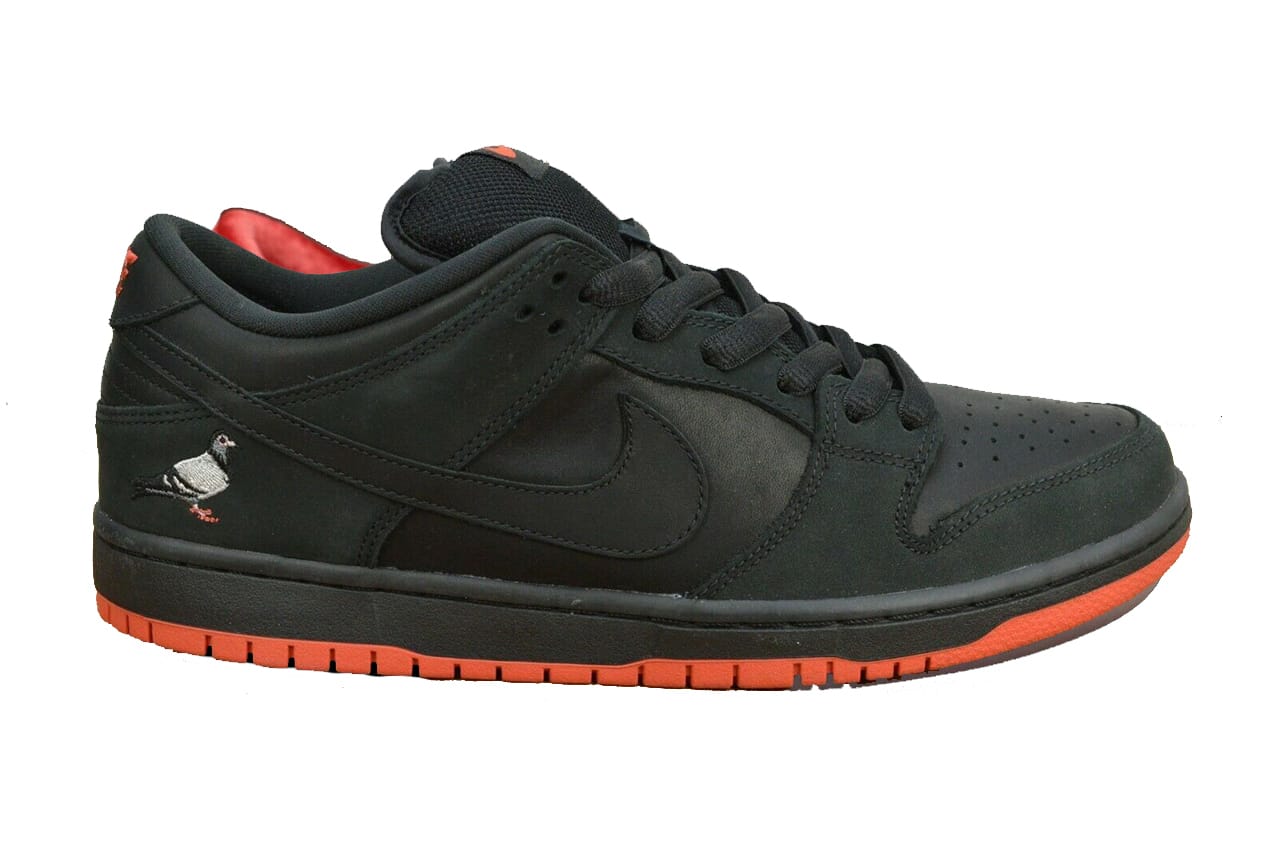 Released in November 2017, the Nike Jeff Staple x Dunk Low Pro SB “Black Pigeon” was inspired by Staples’ 2005 Pigeon colorway. The shoe features a black nubuck, Stetson waterproof leather upper with a black midsole and a sienna outsole. It also comes with the original’s padded thick tongue and the iconic Pigeon logo embroidered on the heel. 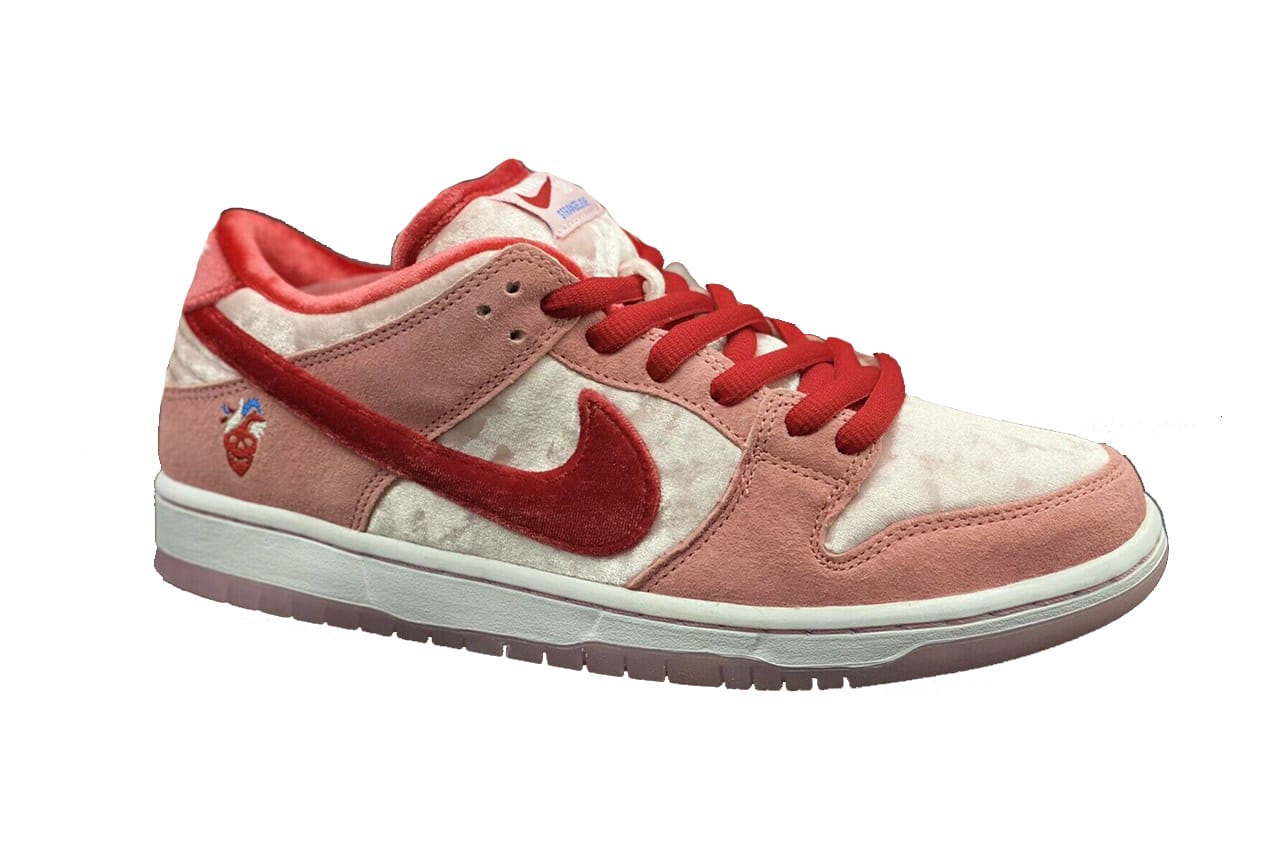 Made in collaboration with Sean Cliver’s skate brand, the StrangeLove x Dunk Low SB QS ‘Valentine’s Day’ celebrates the romantic holiday with a plush take on the retro silhouette. The upper is constructed from white crushed velvet with pink suede overlays and a red velvet Swoosh. Cliver’s ‘Heart Skull’ graphic is embroidered on the lateral heel, while the translucent pink rubber outsole reveals an array of scattered hearts in contrasting red and blue tones. 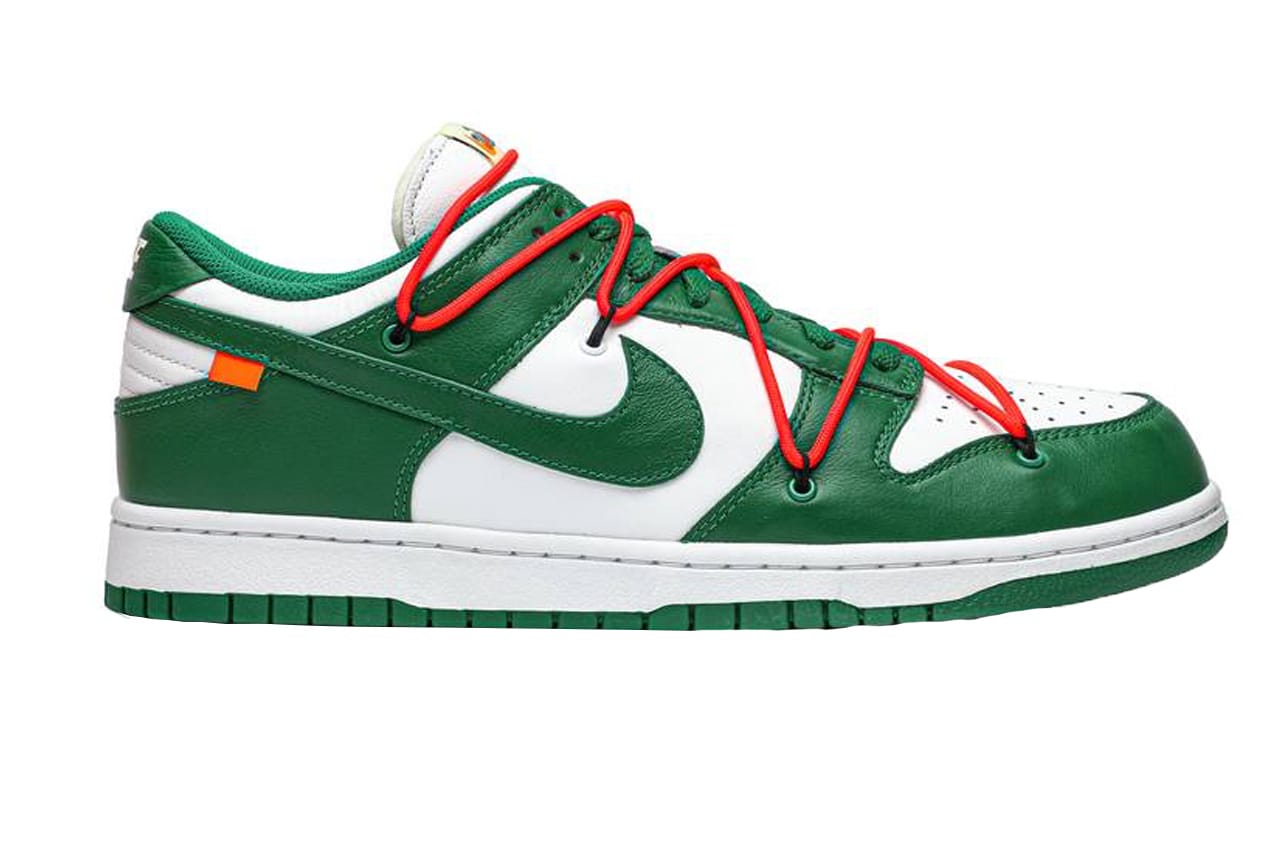 Virgil Abloh explores the art of deconstruction and recreation with a three-piece capsule collection of the Off-White x Nike Dunk Low. Launched in December 2019, this version is given a Pine Green and white leather upper, bold branding on the medial and an orange-flagged Swoosh across the lateral. Bright secondary Flywire lacing and a raw-edge tongue channel Abloh’s signature aesthetic. Its classic rubber cupsole echoes the scheme. 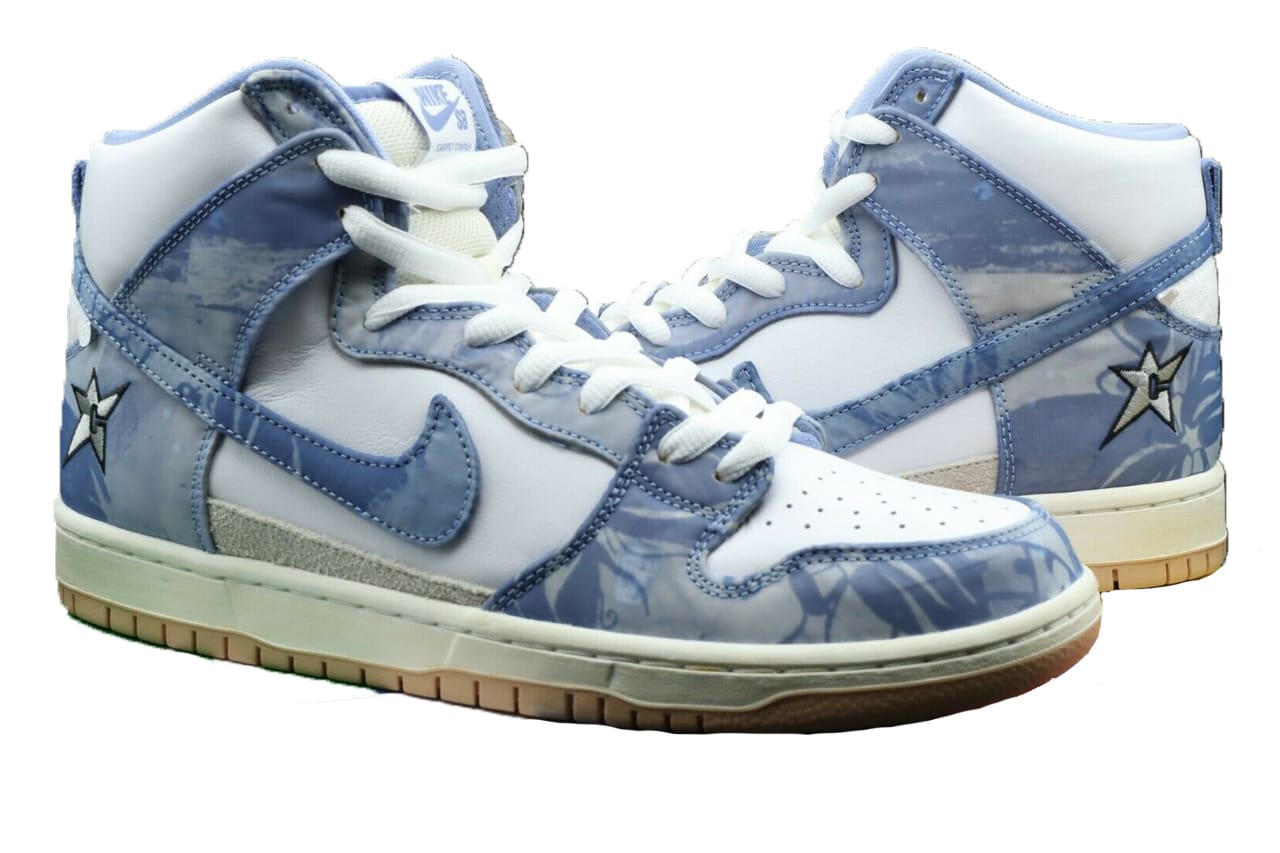 The Carpet Company x Nike Dunk High SB represents the Swoosh’s first collaboration with the Baltimore skate brand, founded in 2015 by a pair of brothers, Ayman and Osama Abdeldayem. Their take on the retro high-top features a white leather upper with semi-translucent blue overlays, inspired by screen printing and designed to wear away with prolonged use. Underneath the fabric, a yellow leather base is accented with a series of whimsical graphics. Additional tearaway detailing on the back heel reveals hidden Carpet Company branding, joining the label’s embroidered star logo on the lateral heel and a Carpet wordmark on the rubber outsole. 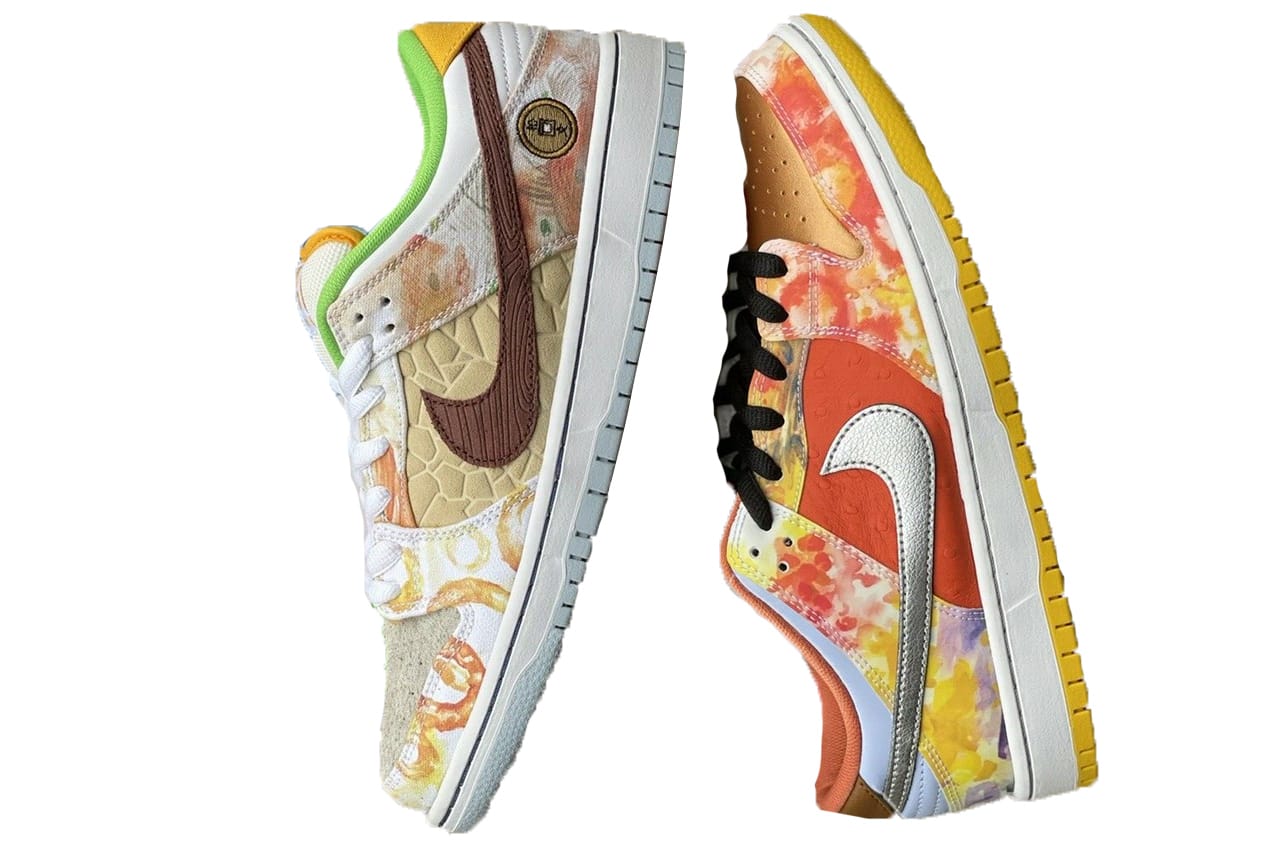 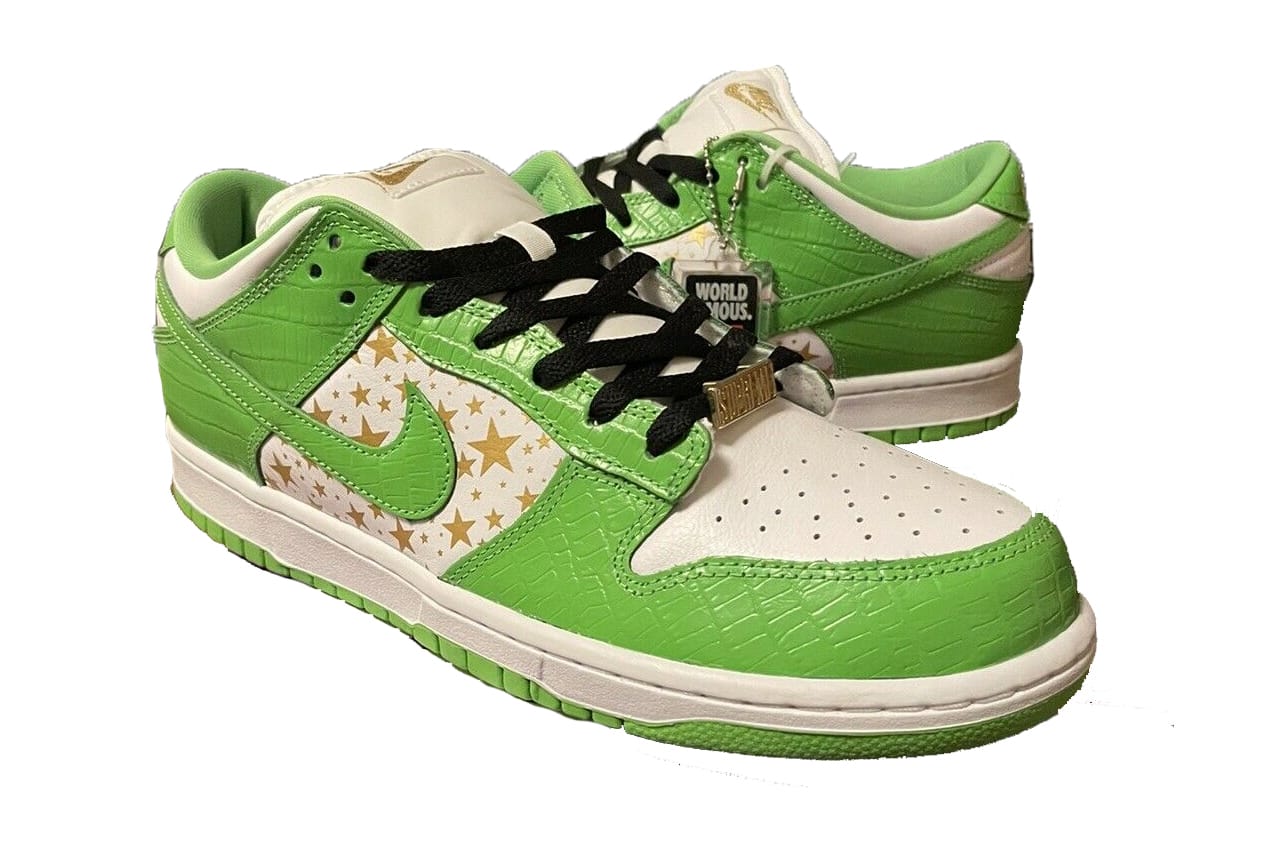