When Bob Barker left “The Price Is Right” after 35 years of giving out cars and vacations to Hawaii, many people wondered whether the show would survive.

For many viewers, “The Price Is Right” was not so much about guessing the cost of, say, a new dinette set as it was about Barker’s reassuringly familiar smile, his grandfatherly presence and the way he bellowed “Come on down!” to scores of exuberant contestants. In 2007, when he retired, there was no clear replacement.

The show auditioned several potential candidates, one of whom was Mike Richards, who was then the host of a reality show called “Beauty and the Geek.” Richards didn’t get the part. But about a year later, he would be brought in as an executive producer to help figure out how the show could thrive with its new host: the comedian Drew Carey.

“Jeopardy!” began a new era Monday without Alex Trebek, its host of 36 years, who died in November and whose last episode was broadcast Friday. And while the program will turn to a series of interim hosts at first, the task of establishing a permanent replacement will fall to Richards, now the executive producer of “Jeopardy!” He is looking back to the transition at “The Price Is Right” for clues about how to replace a beloved game show host who has built up decades of audience loyalty.

“Alex is a legend,” Richards said. “Replacing a legend is going to be nerve wracking. If you’re not nervous then you’re not paying attention.”

It is something of a marvel that shows like “Jeopardy!,” whose first iteration aired in 1964, and “The Price Is Right,” whose first version started in 1956, are even around today. Both of these somewhat retro game shows have survived a technological revolution and decades of evolving pop-culture appetites. But the decisions on who should be their new faces carry high stakes: If viewers don’t like the choice, they will simply change the channel. 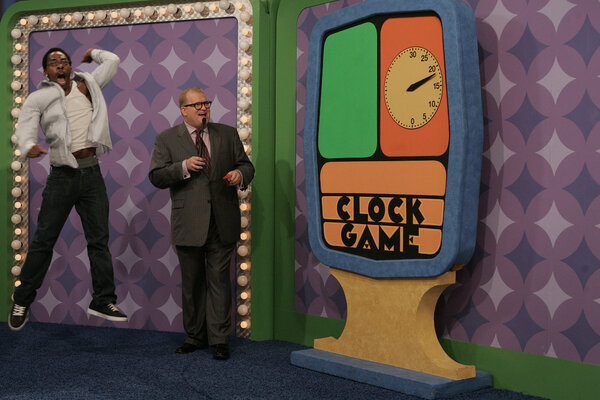 The key to successful new hosts, Richards said, is finding people who can play to their own strengths rather than mimicking their predecessors. That was the core of the problem that Richards identified when he was brought in to “The Price Is Right” in 2008, when ratings were suffering after Barker’s departure.

“They were trying to make Drew host Bob’s show,” Richards recalled. “And I thought it was very important that Drew host Drew’s version of ‘The Price Is Right.’”

Carey said that Barker himself had given him similar advice during the transition.

“He said, ‘Go in there and don’t try to copy me. Do the show your own way,’” Carey said in an interview. “He was right. I can’t go in and do a Bob Barker impersonation.”

But when Carey first got there, the show was still closely following the script of the Barker years.

At the top of the show, a wall with a brightly colored ’70s-esque logo would split open, revealing Carey, who was introduced as “the star of ‘The Price Is Right.’” As Barker had for decades, Carey would soak up the applause.

The formula didn’t quite work for Carey, coming off as a bit awkward. He and Richards agreed that while Barker had a self-assured, authoritative air as host, Carey’s strengths lay in his interactions with audience members and his colleagues onstage.

“I’m like a guy playing along with you or helping you up onstage and being Mr. Friendly,” Carey said of his more down-to-earth approach.

So, they changed the entrance. Carey was no longer introduced as the “star” of the show, but as its “host.” In the new formula, Carey would speed walk through the door, wave to the audience and quickly start greeting his fellow cast members onstage, including the show’s announcer, George Gray. In a 24-minute video analyzing the changing approach to the show’s opening, John Teti, a pop-culture critic, said that the camerawork in the opening sequence evolved to add in a “carnival ride motion” that has the effect of making the viewer “a little giddy.”

To give Carey more people to banter with onstage, Richards decided to provide the models with microphones, no longer relegating them to miming beside furniture sets and hot tubs. He also set out to modernize the prizes so that they would soak up a bit more of the attention: Instead of simply giving away a trip to Hawaii, for example, they’d add in something like a Ferrari rental and a night out on a yacht, Richards said.

Carey is now in his 14th year as host, and he says that he’s become so comfortable with the game play that he no longer feels like he needs to stick solely to the script. He can even imagine a future in which he surpasses Barker’s 35-year tenure, making him into the host who feels impossible to replace.

Despite his philosophy around reimagining the show in the new host’s image, Richards recognizes the inevitability of the audience comparing the next host of “Jeopardy!” to Trebek. The job won’t come without some anxiety.

So Richards is taking it slow. Instead of naming a new host right away, the show has decided to test out a number of guest hosts and see how their audience responds.

On Monday, the trial period starts with Ken Jennings, the record-breaking “Jeopardy!” contestant, who has already taped at least 30 episodes. No other guest hosts have been announced, but The Los Angeles Times reported that Katie Couric has been tapped as another temporary host. Richards said that it was not only the audience that might need time to adjust before a permanent successor to Trebek is named.

“Emotionally,” he said, “I am not ready for that.”