In the middle of the night in a Jerusalem alleyway, a black-hatted yeshiva principal stands before a blazing mass of canvas. He has just set fire to his youngest son’s paintings — portraits of the son’s deceased wife — and he is somberly watching them burn.

Oil, it seems, is a great accelerant.

It’s a Hasidic bonfire of the vanities, with a touch of 21st-century cancel culture: a distillation of artistic, cultural and Oedipal tensions at the heart of the Israeli series “Shtisel,” which explores the quiet intricacies of a Haredi Jewish family’s ultra-Orthodox life in Jerusalem. In Season 3, which arrived to Netflix last month, Akiva’s paintings — especially the portraits of his wife, Libbi (Hadas Yaron), who died mysteriously between seasons — are vessels for his grief, which has prevented him from moving on, much to his father’s exasperation.

Suddenly the son, Akiva (Michael Aloni), wakes in a sweat: The whole thing was a dream, a grotesque allegory for his father’s relentless attempts to get his son to stop acting like “a dried-up radish” and move on from the woman he obsessively paints.

“My parents have always encouraged my art, and yet, there is always a tension between religious-tradition and art,” said the series’s co-creator Ori Elon, who modeled Akiva’s story partly after his own experiences. (Elon, like others interviewed for this article, does not speak English as his first language; interviews were conducted by phone, video, email and text message, sometimes with the help of a translator.)

“That tension has always been a part of my life,” Elon added, “and it still is.” 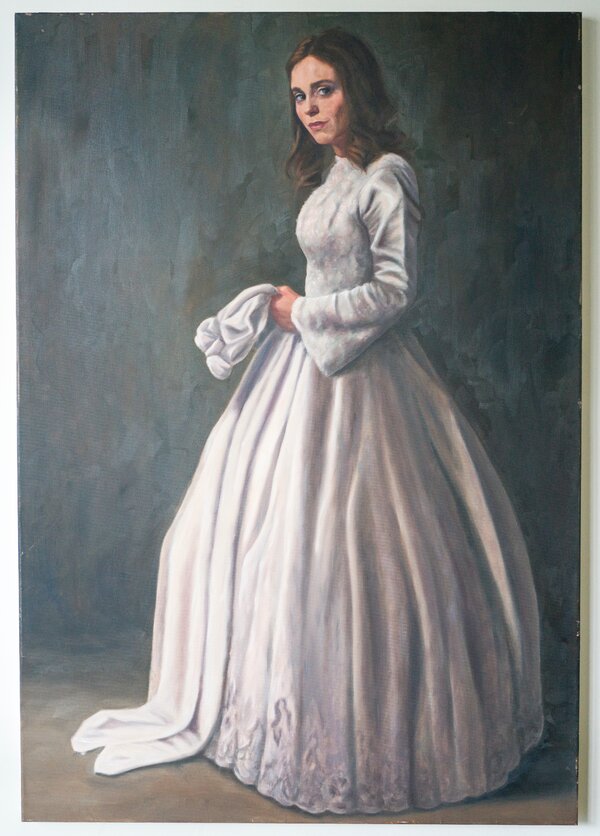 Art and image-making have been a contentious flash point in every season of “Shtisel” — perhaps never so much as in Season 3, in which Akiva’s striking canvases acquire the weight of an actual character. To capture that commanding presence, as well as Akiva’s development as an artist, the creative team tapped two different Israeli artists: Menahem Halberstadt, a cartoonist and illustrator mainly for children’s books, and Alex Tubis, a painter and teacher at the Bezalel Academy of Arts and Design, in Jerusalem.

Each created works that exemplified the character’s talent and proclivity for dramatic colors. Akiva’s first drawings in Season 1, made by Halberstadt, are of lemurs at a zoo scribbled in a notepad; later in the season, Akiva moves on to melancholic self-portraits and quasi-impressionistic oil paintings, also painted by Halberstadt.

“Akiva has a combination of humor and childishness, along with deep and spiritual emotions,” Halberstadt said. “I tried to give expression to both of these sides.”

“I think his attitude to his art changes during the first season,” he added, “from something that is a kind of a hobby, which he does in his spare time for his own enjoyment, to something that has emotional and spiritual significance for him.”

In Season 2, for which Tubis made the art, Akiva’s work changes to include sharply rendered portraits, like one of a boy holding a goldfish in a bag. The subject confronts the viewer with a direct gaze, evoking the courtly portraits of the mid-17th century painter Diego Velázquez.

“I think they’re trying to represent some genius in a very, very high level in the series,” Tubis said. “He is a religious man,” he added about Akiva, and “God is coming to him from another place. But as I see it, he feels it through his art.”

One of the most provocative pieces of the series, painted by Tubis, is a portrait of Akiva’s mother holding him as a baby, with a few strands of her hair escaping her tichel (a traditional head covering). The indiscretion infuriates Akiva’s father, Shulem (Doval’e Glickman), who buys the painting from Akiva’s gallerist and holds a candle threateningly to his dead wife’s likeness before deciding he can’t go through with it. He picks up a brush and paints over the strands instead.

But Akiva is determined and prolific. His art sets him on an unimaginable trajectory, which lands him a gallerist, international plaudits, a prime-time news interview and ultimately a big survey show at the Israel Museum. The attention would be overwhelming for any young artist but especially for Akiva, whose community is suspicious of individual achievements.

“Success in the art world is something that is supposed to reflect a kind of self-realization, but for a Haredi, that kind of success has no meaning because things are not valued through the prism of the individual or personal success,” said Joshua Simon, a former director and chief curator of Israel’s Museums of Bat Yam and a professor at the Pennsylvania Academy of the Fine Arts, in Philadelphia. “If something isn’t in the service of the general good, or sustaining the religious institution, then there is no room for it.”

Making art isn’t explicitly forbidden in Judaism — the Second Commandment (“You must not make for yourself an idol of any kind or an image of anything in the heavens or on the earth or in the sea”) is interpreted variously. But as the adage goes, put two Jews in a room and you get three opinions.

Elon is familiar with the sometimes oppositional pressures. Although he isn’t ultra-Orthodox, he considers himself religious and is an amateur painter. Long before he started working on “Shtisel,” he wrote a short film about a Haredi artist, also named Akiva. A few months later, Elon met his future co-creator, Yehonatan Indursky, who had been raised Haredi and studied in a yeshiva. Together, they adapted the concept for TV and added characters, creating the extended Shtisel family.

To fully realize that vision, they needed artists whose work would feel authentic to the context. Elon had met Halberstadt in a boys-only religious elementary school where they quickly bonded over their mutual creativity, making comics together, including what Elon described as a “wild” adaptation of the Book of Kings.

Later, they studied together in Jerusalem with the Moldavian painter Leonid Balaklav, whose postimpressionist style influenced them both. In Halberstadt, who is also religious, Elon saw an approach to painting that could be a surrogate for Akiva’s.

“That kind of flavor is very much born out of Menahem,” Elon said of Akiva’s style. “They share humor, compassion and a humane point of view. Also, an acceptance of the fragility of all creatures.”

On one of the very first days filming, Halberstadt met with Aloni, who plays Akiva, to talk about how to hold a pencil, demonstrating the subtle movements of an artist’s hand and showing him how to pose while painting.

“It was pretty amazing to see how fast he got it,” Halberstadt said. He created most drawings and paintings before heading to set. On occasion he would paint different stages of a canvas — beginning, middle and near completion — and then Aloni might add a brush stroke or two during the shoot.

“Throughout the series, every season, I always have my own sketchbook — I sketch the whole crew and cast all the time,” Aloni said. “I now know how to look on the painting in a different way.”

Aloni hesitated to call himself a talented visual artist just yet. “But it’s close enough for me to feel Akiva’s soul and to be able to sketch people now,” he added.

For Season 2, the creative team wanted to emphasize Akiva’s stylistic and textural transformation, so they sought a new artist. When Tubis got the call, he prepared a slide show — not of his own paintings but of works made by the British painter Peter Doig.

“I’m telling them, ‘But you know, this is somebody who is very modern today, and he’s popular — and maybe I can make something like that?’” There was an awkward silence until Dikla Barkai, an executive producer of the series, spoke up.

“‘Alex, listen, we want your paintings in the show.’” Tubis recalled Barkai’s having told him. “And then I got quiet, because for me, it’s like: Really? Me?”

“We looked at many painters and works, and something in Alex’s paintings touched us,” she said. “He has something in his painting that is very emotional, and he can catch the moment.”

Tubis, who immigrated to Israel from Russia at age 12, makes work that seems to shudder with isolation, a feeling that resonates with Akiva’s experience.

“I was never at home in Israel, not until the time I became an art student,” Tubis said. “But even among others at art school, I’ve always been seen as a bit crazy and a dangerous Russian.”

“Akiva is also different,” Tubis added — “a very weird animal in his own tribe.”

Beyond its strong evocations of feeling, said James S. Snyder, the director emeritus of the Israel Museum and the executive chairman of the Jerusalem Foundation, the art this season functions as another way for Akiva to delve into his spirituality.

“It actually connects to the Jewish culture that he comes from,” Snyder said, “where stories that happen in your life get interpreted through the depth of your belief and your faith.”

Israelis (and audiences worldwide) have responded enthusiastically to the series, and not only because it pulls the curtain back on an insular culture; there’s a struggle for personal expression at the heart of the story that has a universal quality.

Based on interviews and anecdotes, it’s an appeal to which some Haredim are themselves not immune. While television is generally considered taboo for many Haredim, it’s no secret that some are watching. Halberstadt said he believed that the series’s popularity was already creating a shift, however small, in some ultra-Orthodox communities, whose adherence to strict, ancient rules has always emphasized conformity.

“Akiva is dealing with the question of individualism, even if subconsciously,” Halberstadt said. “On the one hand, he does not want to break away from his family and community. And on the other hand, he feels that he as an individual has a voice that he wants to give expression to.”