TAIPEI, Taiwan — A lunchtime bout of torrential rain, lightning and thunder couldn’t keep a crowd of intrepid souls from lining up at Liberty Plaza here on Saturday. They simply put up their umbrellas.

What were they waiting for? Not a rock concert. Not a soccer match. Remarkably, they were staking out a spot for a contemporary dance performance. That’s because in Taiwan, contemporary dance is virtually synonymous with Cloud Gate Dance Theater, a company that has a special place in the nation’s cultural life. (There is a Cloud Gate Street in Taipei, and Aug. 21 is Cloud Gate Day.)

The open-air show was a final bow for Lin Hwai-min, the company’s founder, who was stepping down as the troupe’s artistic director after 46 years. Like the company, he looms large in his country’s cultural life, as famous in Taiwan as any movie or pop star.

By midafternoon, the skies had cleared and the lines had swelled to thousands. At 7:30 p.m., around 50,000 people were seated decorously on the plaza between the National Theater and the National Concert Hall. Camera operators were stationed nearby, filming the dance for a live broadcast on national television.

When Mr. Lin arrived onstage, the audience members applauded, shouted and held up banners proclaiming their love. At the end of the show, they waved their phones, creating a sea of lights.

Cloud Gate, which will now be run by Cheng Tsung-lung, the director of the company’s junior troupe, has long been an established presence on the international dance scene. “Lin Hwai-min is the name card of Taiwan in the performing arts, one of the most important representatives of our culture,” said Chang Hui-chin, the director general of Arts Development at the Ministry of Culture, who was attending the outdoor performance. “He has connected us to the world.”

Lin Yatin (no relation to Mr. Lin), an associate professor of dance at the Taipei National University of the Arts, said there was no professional contemporary dance troupe in the Chinese-speaking world when Mr. Lin founded Cloud Gate in 1973. That was a moment when Taiwan was seeking its own cultural identity following 50 years of Japanese rule (1895-1945), after which it was ceded back to China. In 1949, China’s nationalist government lost control of mainland China and fled to Taiwan, establishing martial law.

“They made my parents’ generation Japanese, and they tried to make us Chinese,” Mr. Lin said in an interview before the concert. “I didn’t set out to reflect Taiwanese society, but when I started choreographing, I knew I wanted it to be something of our own.”

What he came up with was a remarkable blend of Western and Eastern dance forms and aesthetics, fusing Martha Graham and other contemporary dance techniques with Chinese classical and folk dance and ballet. In the 1990s, he would add martial arts, meditation, tai chi and the breathing techniques of qigong to his dancers’ regimens.

“When Lin founded Cloud Gate, Taiwan was still under martial law rule, with no recognition, knowledge, appetite and audience for dance of any kind,” said Chien Wen-pin, the executive and artistic director of Taiwan’s new $348 million National Kaohsiung Center for the Arts. “The early success of Cloud Gate was indirectly responsible for the founding of Taiwan’s National Theater and Concert Hall and the National Symphony Orchestra nearly 15 years later. It is not an overstatement to say that Cloud Gate and Lin have created for Taiwan three generations of audiences for culture from square one.”

Mr. Lin, 73, a charismatic man who looks preternaturally youthful, said he had wanted to be a dancer ever since seeing Powell and Pressburger’s classic ballet film “The Red Shoes” at age 5.

His upper-middle-class family “never took it seriously,” he said, but when he published a short story at 14, he used the earnings to pay for ballet classes. He studied journalism, published two books of short stories, and won a fellowship for the University of Iowa’s International Writing Program. There, he began a course in dance, learning Graham and Doris Humphrey techniques, among others. “I spent more time at the barre than writing,” he said.

He started to dabble in choreography soon after, and attended two summer sessions at the Martha Graham School in New York. After finishing his degree in Iowa, he returned to Taiwan, and began teaching in the English department at Chengchi University in Taipei. But a dance department at another university heard about his experiences in the United States and asked him to teach.

“I was reluctant at first, but found I could offer a lot,” he said. “The kids I taught wanted to perform, so we started Cloud Gate.” (The company is named after an ancient Chinese ritual dance.) Their first two performances sold more than 3,000 tickets. “It was a good story,” Mr. Lin said. “A famous young writer had turned himself into a choreographer.” A good story, maybe, for everyone else. “I almost had a nervous breakdown,” he said. “I thought, I’d better learn how to choreograph.”

Frustrated by his generation’s ignorance about Taiwanese history and traditions, he also decided to learn about his country. “I didn’t know a thing about my own culture,” he said. “I read our poetry, spent time at museums, went to see traditional opera. I felt the company needed to connect to our own country.”

That connection has probably been the secret of Cloud Gate’s success at home. (When the company’s studios burned down in 2008, Huang Haluko, the company’s manager said, there were so many spontaneous donations that the company was able to build a new $22 million home by 2015 without a fund-raising campaign.) But Cloud Gate also quickly received international recognition after it began to tour abroad in the late 1970s, winning acclaim for the elegance of Mr. Lin’s fusion of styles and the beauty of his stage settings. 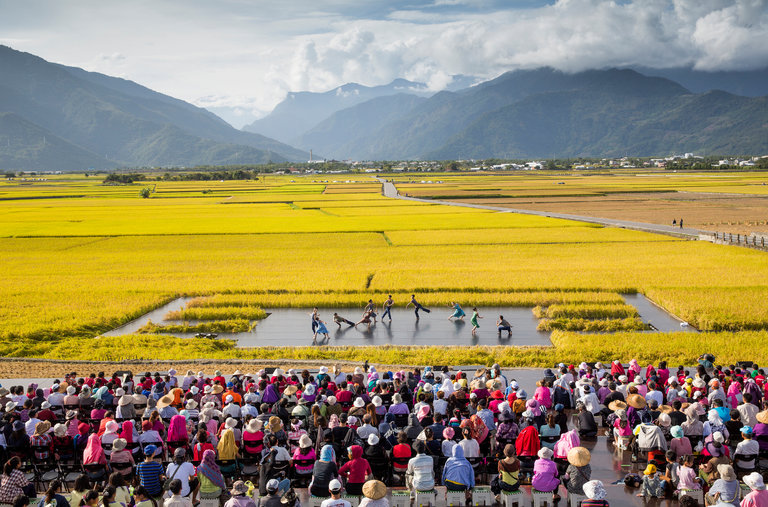 Joseph V. Melillo, the former artistic director of the Brooklyn Academy of Music, who first invited the company to perform “Nine Songs” there in 1995, said in an email that no one challenges Mr. Lin’s “maturity of choreographic style and composition” in the Asian dance world, adding that Mr. Lin was an unparalleled teacher and had produced a new choreographic generation.

Mr. Lin is modest in the face of these accolades. “All modern dance companies tend to fall apart when their founder dies,” he said before the show. “I consider myself the caretaker, not the identity. Cheng Tsung-lung is ready for a challenge. It would be terrible to keep a Prince Charles in the house.”

Mr. Cheng, 43, is in many ways very unlike Mr. Lin. His background is not literary or intellectual; his parents, migrants from the south of the country to Taipei, sold slippers on the street before starting their own small factory. Sent to a school with an extensive dance program, Mr. Cheng excelled but became addicted to amphetamines in his early teens, he said in an interview. Being arrested by the police for possessing drugs and performing community service was a turning point, he said. After graduating, he worked as a truck driver by day, and studied dance part-time at college at night.

He joined Cloud Gate, but after four years, a spinal injury forced him to stop dancing and led him to focus on choreography. He became the resident choreographer and artistic director of the junior troupe, Cloud Gate 2.

His physical style and inspirations are his personal history, he said, citing “13 Tongues,” a 2016 work based on his memories of the vivid street life of his childhood, and which Cloud Gate 2 performed earlier in the week at the company’s sleek and curvaceous building, in a verdant setting outside the city.

Mr. Cheng said that he was shocked when Mr. Lin asked him to take over Cloud Gate, but that he tried not to feel intimidated or nervous. He said his central focus was to maintain a connection to society. “Dancing is a way to connect people, and now the baton is with me,” he said. “You don’t have to abandon the past to have new beginnings.”

But on Saturday, the theme was continuity, not change. “My parents brought me, and now I bring my children, and it’s the same for so many,” said a woman near the front of the stage. Mr. Lin echoed the sentiment in his speech, alluding quickly to his retirement and that of several dancers, before moving on briskly. “Cloud Gate Theater of Taiwan will keep moving forward,” he said. “See you here next year.”