The Juilliard School, one of the world’s leading performing arts conservatories, is better known for recitals than picket lines. But students protesting a planned tuition increase occupied parts of its Lincoln Center campus this week and, when they were later barred from entering a school building, led music- and dance-filled protests on West 65th Street.

The protests began Monday when a group of students, objecting to plans to raise tuition to $51,230 a year from $49,260, occupied parts of the school’s Irene Diamond building and posted photos on social media of dozens of sheets of multicolored paper arranged to form the words “TUITION FREEZE.”

On Wednesday, students said, they received an email from the administration saying that “school space” could not be used for nonschool events without permission. “Posting signage, posters or fliers, tabling in the lobby, solicitation or distributing print materials also requires advance authorization,” the message added.

Students returned to the Diamond building that day, marching through the halls and stopping outside the door of the school’s president, Damian Woetzel. At one point, some said, they knocked on his door, chanting: “We know you’re in there. Will you meet students’ needs and freeze tuition?”

Later, protesters said, they were barred from the Diamond building, and the school told them that it was investigating an incident that included reported violations “pertaining to community safety.” On Thursday, about 20 students continued their tuition protest on the sidewalk outside, waving placards and accusing the school of using heavy-handed tactics to quell dissent.

“They have made it quite apparent they will not listen to us,” said Carl Hallberg, an 18-year-old drama student.

Rosalie Contreras, a spokeswoman for Juilliard, wrote in an email that the school was increasing financial aid and raising the minimum wage for work-study jobs on campus to $15 an hour, and that it had special funding available for students experiencing financial hardship.

“Juilliard respects the right of all community members including students to freely express opinions with demonstrations that are conducted in a reasonable time, place and manner,” Ms. Contreras added. “Regrettably the demonstration on Wednesday escalated to the point where public safety was called by an employee.” 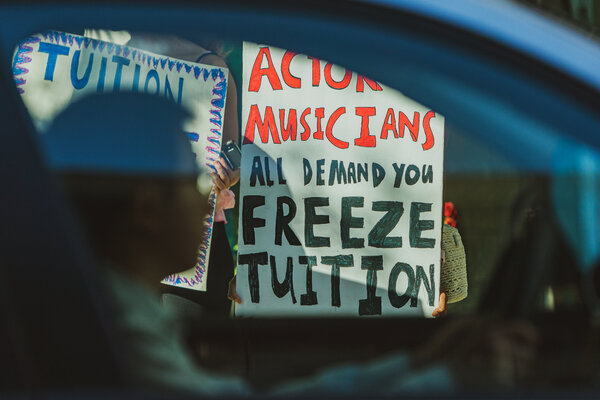 Both Mr. Hallberg and another student, Gabe Canepa, said they were part of a campus group called the Socialist Penguins, which had called for the protests. They said that they had not jeopardized anyone’s safety.

Mr. Canepa, a 19-year-old dance student, added that students took the tuition increase seriously because it meant they would have less to spend on “rent, groceries, subway fares, supplies we need for school.”

An online petition by the group said that “raising the already astronomically high cost of tuition” hurts working class students. It added: “We demand that Juilliard cancel their planned tuition raise.”

Students taking part in the protests said that roughly 300 current students, or about 30 percent to a third of those currently enrolled, had signed the petition.

The events at Juilliard this week appear to have been less contentious than school occupations that have taken place elsewhere in Manhattan over the years, including at New York University, Cooper Union and the New School, where police officers wearing helmets and carrying plastic shields arrested people who took over part of the school’s Fifth Avenue building in 2009. But the conflict struck a discordant note.

Juilliard is also facing pressure on diversity issues. In May, CBS News quoted a Black student there saying she had been disturbed by an acting workshop in which the class members were asked to pretend they were slaves, as audio of whips, rain and racial slurs was played. Juilliard told CBS that the workshop, which had been used for years, was a “mistake” and that it regretted “that the workshop caused pain for students.”

After Wednesday’s protests, several students said that they had received emails from Sabrina Tanbara, the assistant dean of student affairs, letting them know that their access to the Diamond building had been suspended pending an investigation.

Unable to enter the building, the students held a protest outside on Thursday, and encouraged passing motorists to honk their horns in support.

One young man vogued on West 65th Street. Mr. Hallberg strummed a guitar, and another student plucked a standup bass, leading a singalong of the labor standard “Which Side Are You On?”

Some students said they felt they had been punished without due process.

Sarah Williams, a 19-year-old oboe student, said that she had written to Ms. Tanbara asking what, specifically, she was believed to have done that would justify barring her from the Diamond building. She said she had yet to receive a response.

“My resources have been eliminated without any explanation,” she said.

Raphael Zimmerman, a 20-year-old clarinet student, said he had received an email from Ms. Tanbara notifying him that he would be contacted to schedule an “investigatory meeting” to obtain his account of activity outside the president’s office late on Wednesday afternoon.

“I think saying the several minutes we spent knocking on that door and singing was harassment,” he said, “is essentially rejecting our right to assemble and demonstrate.”