Jimmy Kimmel and Trevor Noah touched on the issues Texas has faced this week after a winter storm overwhelmed the state’s power grid, leaving millions of people without heat.

“I know people were praying for Texas to go blue, but not like this,” Noah joked. “I mean, is it too much to ask for just one apocalypse at a time?”

“Some people are putting up Scotch tape and blankets. That’s not how people should keep heat in their house; that’s how you hide the weed smell from your R.A.” — TREVOR NOAH

The electricity crisis in Texas, which has its own grid to avoid federal regulation, was largely caused by freezing in the natural gas pipelines that provide the majority of the state’s power supply. But conservatives and fossil fuel advocates have blamed wind power and even the Green New Deal, a climate proposal co-sponsored by Representative Alexandria Ocasio-Cortez.

“The main reason Texas has plunged into darkness is that its natural gas industry has been crippled by this storm. And that might — might — have been preventable, except that Texas deregulated its power supply in the ’90s, which was clearly not the wisest decision. I mean, trust me, as a man who lived through the ’90s, you should probably rethink most of the decisions you made in that decade.” — TREVOR NOAH

“And this just goes to show you, you can’t put profits over quality and safety. Money’s not worth a whole lot if you have to burn it to keep warm.” — TREVOR NOAH

“I mean, this is the state that prides itself on its oil and gas industry, and now, that industry has failed spectacularly. This would be like Jason Momoa needing help opening a pickle jar, which is probably why state officials and their allies on cable news are working so hard to blame someone else.” — TREVOR NOAH

Gov. Greg Abbott of Texas “has been working hard to somehow push the blame to Democrats and the Green New Deal, which doesn’t even exist yet. And Tucker Carlson is helping him out by blaming it on windmills.” — JIMMY KIMMEL

“These guys are so desperate to just let fossil fuels off the hook, that they’re blaming A.O.C. and the Green New Deal — which, by the way, hasn’t even happened yet — for something that’s happening in Texas right now? But this just shows you, no matter what happens, no matter how far removed she is from the problem, conservatives can and will always find a way to blame the boogeyman, A.O.C. Rick Perry could have broken his arm as a kid and he would have blamed it on A.O.C.” — TREVOR NOAH

“Last night, Biden promised the vaccine will be available to every American who wants it by the end of July. And then we can get back to spreading the old stuff — herpes, gonorrhea and good times!” — JIMMY KIMMEL

“The White House is said to be in talks with Amazon right now to help distribute the vaccine. The way it will work is any Prime member who can prove they’ve watched all six seasons of ‘Bosch’ will get vaccinated.” — JIMMY KIMMEL

“And with over a million Americans getting vaccinated every day, everyone is anxiously looking forward to a time when they can get back to doing normal things again, like going out to eat, or not thinking about the welfare of the people who deliver their packages.” — TREVOR NOAH

What We’re Excited About on Thursday Night 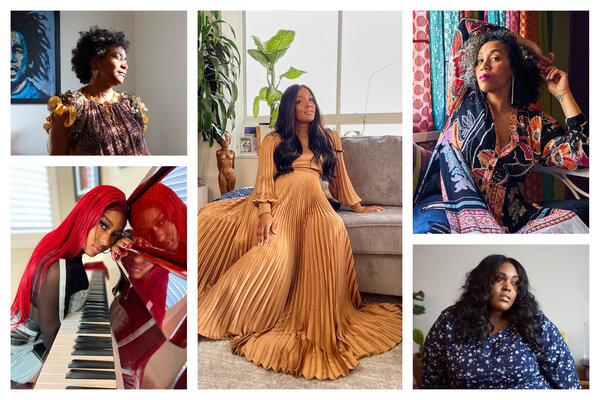 Five Black women who work in country music share their experiences as singer-songwriters in a largely white, male industry.