Trevor Noah and Stephen Colbert addressed police brutality against Black men on Monday night, with a focus on two recent high-profile cases. The first was the death of Daunte Wright, who was fatally shot during a traffic stop near Minneapolis on Sunday. The second was that of Caron Nazario, an Army lieutenant who was in uniform in December when two Virginia police officers ordered him to stop his car, pointed their weapons at him and doused him with pepper spray.

“What a strange way to say ‘Thank you for your service.’” — STEPHEN COLBERT

“And how crazy is it that this driver — think about it — he knew to get to a gas station so that he would have decent lighting for the encounter. Imagine. Just think about that for a moment: Police brutality has forced everyday Black Americans to become lighting experts.” — TREVOR NOAH

“I mean, at this point Black people should just start singing ‘The Star-Spangled Banner’ when they get pulled over. Then maybe, just maybe, the cops will be like, ‘Well, I don’t want to pepper spray the anthem — what do I do?’” — TREVOR NOAH

Colbert and Noah expressed frustration with a police statement saying that the officer who shot and killed Wright had mistakenly confused her gun for her Taser.

“A man was killed at a traffic stop because the police officer mixed up their gun and their Taser? Is that even supposed to be a legitimate excuse? Like, we’re supposed to watch that and go, ‘Ah, OK. One time I used sugar instead of salt, so I can relate.’” — TREVOR NOAH

“And by the way, don’t you find it amazing cops think everything is a gun except their own gun?” — TREVOR NOAH

“And even if it was just a mistake, that’s not a mistake that you just forgive and walk away, especially since you know the people jumping to her defense for using a gun instead of a Taser — those are the same people they want their waiter fired for bringing them a regular Coke instead of Diet.” — TREVOR NOAH

“Congress returned after a two-week recess. ‘Not much, just hung out,’ said Matt Gaetz before anyone could talk.” — SETH MEYERS

“Matt Gaetz, Florida congressman and fraternity brother who wants to show you something in his room, has been under fire since news broke of him being under investigation over possible sex trafficking. But like a Karen in a Bath & Body Works, he refuses to back down.” — TREVOR NOAH

“According to a new report, Florida congressman Matt Gaetz used the cash transfer app Venmo to send an accused sex trafficker $900, who then paid three young women for, quote, ‘tuition and school,’ which is a pretty weak attempt to cover your tracks. That’s like leaving your wallet at a crime scene but wiping your fingerprints off it.” — SETH MEYERS

“Let he who has never Venmo’d a prostitute cast the first stone.” — JIMMY KIMMEL

“I mean, you think you know a guy, and then it turns out — yeah, you’re totally right. You do know him. You know him pretty well.” — TREVOR NOAH

“The House Ethics Committee announced Friday it will launch an investigation into Republican congressman Matt Gaetz over allegations that he, quote, ‘may have engaged in sexual misconduct, and/or illicit drug use, shared inappropriate images or videos on the House floor, misused state identification records, converted campaign funds to personal use and/or accepted a bribe, improper gratuity or impermissible gift’ — or as Republicans call it, ‘running for re-election.’” — SETH MEYERS

John Boehner, the former speaker of the House, played a speed-round of quick reactions to politicians like Mike Pence and Barack Obama on Monday’s “Late Show.”

What We’re Excited About on Tuesday Night

Phoebe Robinson will talk about her new Comedy Central series, “Doing the Most,” on Tuesday’s “Tonight Show.” 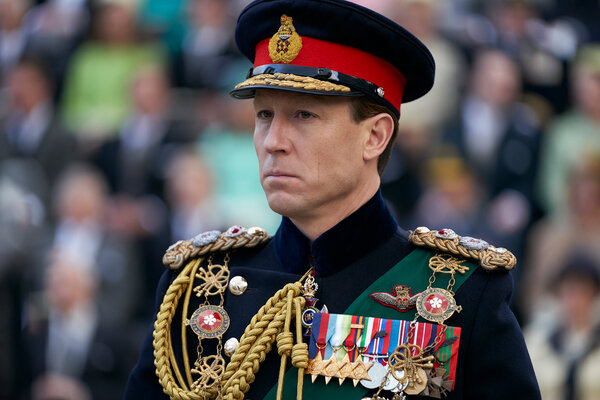 There have been numerous onscreen portrayals of the late Prince Philip, some more accurate than others. His biographer assesses the best-known attempts.