Michelangelo Lovelace, an artist whose poignant sketches of people he cared for as a nursing home aide and whose bold paintings of urban Black life gained increasing attention and critical praise late in his life, died on May 26 at his home in Cleveland. He was 60.

His sister Janine Lovelace said the cause was pancreatic cancer.

Mr. Lovelace’s paintings, many of them distinctive citycapes, are acrylic-on-canvas reflections of his years growing up poor in Cleveland’s housing projects. He depicted joyful, everyday scenes — a carnival, a block party, a concert — but also raw representations of crime, poverty, racism and drug abuse.

In “Wheel of Poverty” (1997), contestants spin a wheel that lands on “prizes” like bankruptcy, Chapters 7, 11 and 13, and a cut in welfare benefits. “Life Trapped in a Bottle” shows tiny people crammed together in a jug labeled “Dream Killer/Drink-n-Drown 90 proof liquor.” And a brick wall in “Trigger Happy” (1998) advertises “America 2000/Inner City Shooting Range/Live Targets” as a half dozen gunned-down people lie in pools of blood.

One of Mr. Lovelace’s most recent paintings, “Social Distancing” (2020) shows four sections of a city at night, with the doors to every club, school, restaurant and house of worship closed because of the coronavirus pandemic.

His artistic influences were diverse: J.J. Evans, the artist character played by Jimmie Walker on the sitcom “Good Times”; comic books; and his mentor, the Rev. Albert Wagner, a renowned outsider folk artist.

Mr. Lovelace said he had been on the wrong artistic path when he met Mr. Wagner, creating paintings of jazz and musicians.

“I was trying to do art that I thought people wanted,” he told Cleveland magazine in 2008. But Mr. Wagner had done the opposite, painting biblical figures with their faces showing emotions like shame, fear and hope.

“He had his message, he had his vision, and that’s how he changed my work,” Mr. Lovelace said. “Once I met him I started looking at my environment.”

His frequent integration of street scenes with text on billboards and buildings (“School of Hard Knocks, Open Your Mind and Your Ass Will Follow”) suggested “an unexpected alliance of two other Ohio-bred greats, Jenny Holzer and George Bellows,” Andrea Scott wrote in The New Yorker in a brief review of “The Land,” an exhibition of 16 of Mr. Lovelace’s paintings in 2018 at the Fort Gansevoort gallery in Manhattan.

She praised his paintings as “vibrant and prismatically structured.” 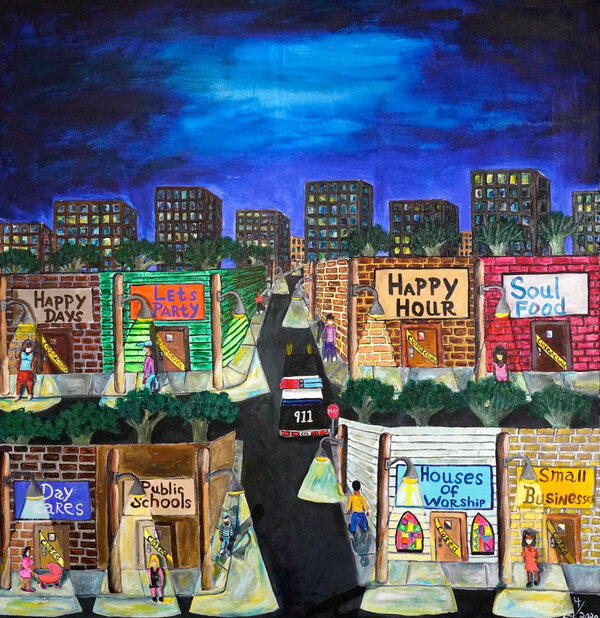 Michael Anthony Lovelace was born in Cleveland on June 15, 1960. His father, L.B., owned a cleaning company. His mother, Juanita (Davis) Lovelace, was a homemaker. An arrest for selling marijuana when Michael was a teenager pushed him toward art.

“The judge said, ‘What can you do?’” Mr. Lovelace recalled in an interview in 2017 with “Applause,” a public television program in Cleveland. “I said, ‘I can draw,’ and he said, ‘You come back here again, I’m going to send you to prison. So stick to drawing.’”

He did, but he never had the luxury of doing it full-time. He attended the Cleveland Institute of Art in the mid-1980s but left after a year and a half and did not graduate because he couldn’t afford the cost of tuition and supplies while raising his children on welfare. His artistic talent led some of his friends to call him Michelangelo, and in his late 20s he legally adopted the name.

After entering a job training program, he found work as a maintenance man but was fired for reasons that are unclear. He was hired as a nursing home nurse’s aide in 1990, a job that provided him with health benefits and a paycheck to subsidize his artwork.

His sketches of the people he knew and cared for are quite different from his paintings. They are not complex street scenes but mostly intimate portraits of isolated men and women with tired but warm and strong gazes, drawn on paper with ink and markers.

Among them are a woman, whom he suspected of having dementia, asleep on her chair. She had to be monitored lest she fell while trying to walk. Another was of a man with a baseball cap and a hint of a smile. He encouraged Mr. Lovelace’s art.

“I would say, ‘Hey, what’s going on, Mr. Walker?’ and he would reply, ‘Man, how are you doing today?’” Mr. Lovelace said in an interview last year that accompanied “Nightshift,” an online exhibition of his nursing home drawings at Fort Gansevoort (closed because of the pandemic). “We would have quick conversations like that, and I’d do a quick drawing of him.”

Mr. Lovelace’s sketches of people in hospital beds stemmed from his occasional duty to watch them so that they didn’t awaken and remove their IVs.

“The artist creates a visual vernacular of caring, a silent form of storytelling that begs to be heard,” Charity Coleman wrote in her review of the exhibition in Artforum. The drawings, she added, “bring warmth and humanity to the fore.”

The insular world that Mr. Lovelace rendered as an aide predated the Covid-19 pandemic, which has ravaged nursing homes, killing at least 182,000 residents and employees in the United States. But his sketches capture the alienation of nursing home residents that has been heightened in the pandemic.

“The coronavirus has exposed what the public has taken for granted,” Mr. Lovelace told the fashion and cultural magazine Flaunt last year. “Sometimes people are housed in ways that take the individuality away from them, and are housed in a petri dish, making them subject to anything.”

After living for many years in a building renovated for artists in the 1990s, he bought a house in 2013 with help from a $20,000 fellowship provided by the nonprofit Community Partnership for Arts and Culture (now called Arts Cleveland) and with support from Cuyahoga Arts & Culture, a public funder of the arts in the Cleveland area. Two years later, he won a prestigious Cleveland Arts Prize for a midcareer artist.

In addition to his sister Janine, Mr. Lovelace is survived by his wife, Shirley (Smith) Lovelace; his father; his daughters Georgia Lovelace and Michellangle Lovelace; his sons Michelangelo Jr. and Anthony Lovelace; his stepdaughters Stanya Smith, Tasha Robinson and LaQuala Stradford; his stepsons Lonnie and Derrell Smith and Terry Scott Jr.; 17 grandchildren; one great-granddaughter; another sister, Traci Lovelace; and a brother, Lawrence. Two other marriages ended in divorce.

In 2007, one of Mr. Lovelace’s works, “My Home Town,” hung briefly in the main building on the campus of the Cleveland Clinic, one of the nation’s leading medical centers. The painting, a teeming cityscape that beckoned “Welcome to Cleveland,” caused an uproar for its depiction of what its critics felt was a segregated city, with most of the faces on the right side white and many on the other side Black. It was removed.

“I think people misunderstood who I was,” Mr. Lovelace told the weekly newspaper Cleveland Scene in 2012. “I painted the way I remember Cleveland being — white on the West, Black on the East, and with downtown where people came together in the middle.”

Adam Shopkorn, a founder of the Fort Gansevoort gallery, saw the painting two years later on the museum’s website and contacted Mr. Lovelace. Their conversation led to two solo exhibitions that have helped boost the price of his works to as much as $40,000 each.

“A lot of his work is now in institutional and private collections,” Mr. Shopkorn said. “My hope is that a major museum will give him a retrospective.”