Pat Sajak is wheel-y sick of the “ungrateful” attitudes displayed by some contestants on his game show.

The longtime host hilariously called out “Wheel of Fortune” contestant Darin McBain on Wednesday after the player took issue with getting one of his answers correct.

McBain was tasked with solving a crossword involving words that started with “kitchen.” He rattled off his answers ― “cabinet, oven, towels, sink” ― and answered correctly but found himself puzzled.

“Kitchen oven? What was that?” McBain asked Sajak.

“Yeah, where else would you keep an oven?” Sajak retorted. 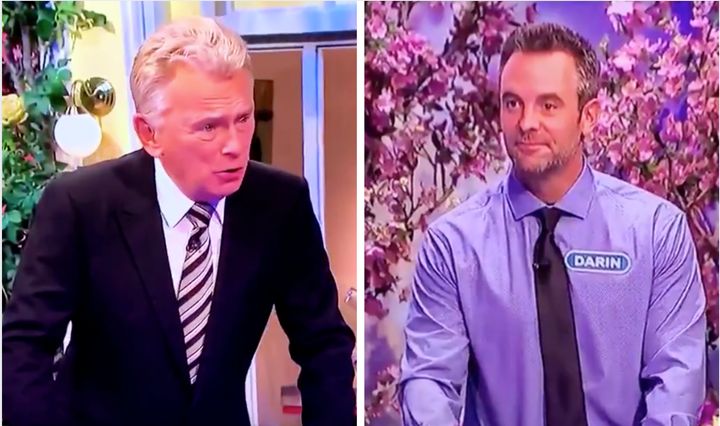 McBain didn’t stop his line of questioning. “Well, for sure in the kitchen, but who calls it a ‘kitchen oven?’”

Sajak wasn’t having it and understandably lost his cool just a bit.

“You won! Don’t argue, Darin! You got the puzzle! Ungrateful players! I’ve had it!” Sajak responded, before adding that he was “just teasing.”

“I finally snapped!” the host quipped.

McBain, whose mother was a three-day champion on the show in 1982, finished the night in second place and took home a cool $15,350. He also got an apology from Sajak.

“I’m sorry I yelled at you,” the host said. “It’s just — I don’t remember your mother giving us trouble like you did.”

The exchange was fairly mild as far as outbursts go and nowhere near as cringeworthy as the actions of another “Wheel of Fortune” contestant earlier in the month.

A player named Alex tried to give the final answer for a group puzzle but broke one of the show’s strict rules: He added another word to the answer.

We’ll be thinking about this moment for a long, long time.

Tags: entertainment, Television, wheel
Recent Posts
We and our partners use cookies on this site to improve our service, perform analytics, personalize advertising, measure advertising performance, and remember website preferences.Ok