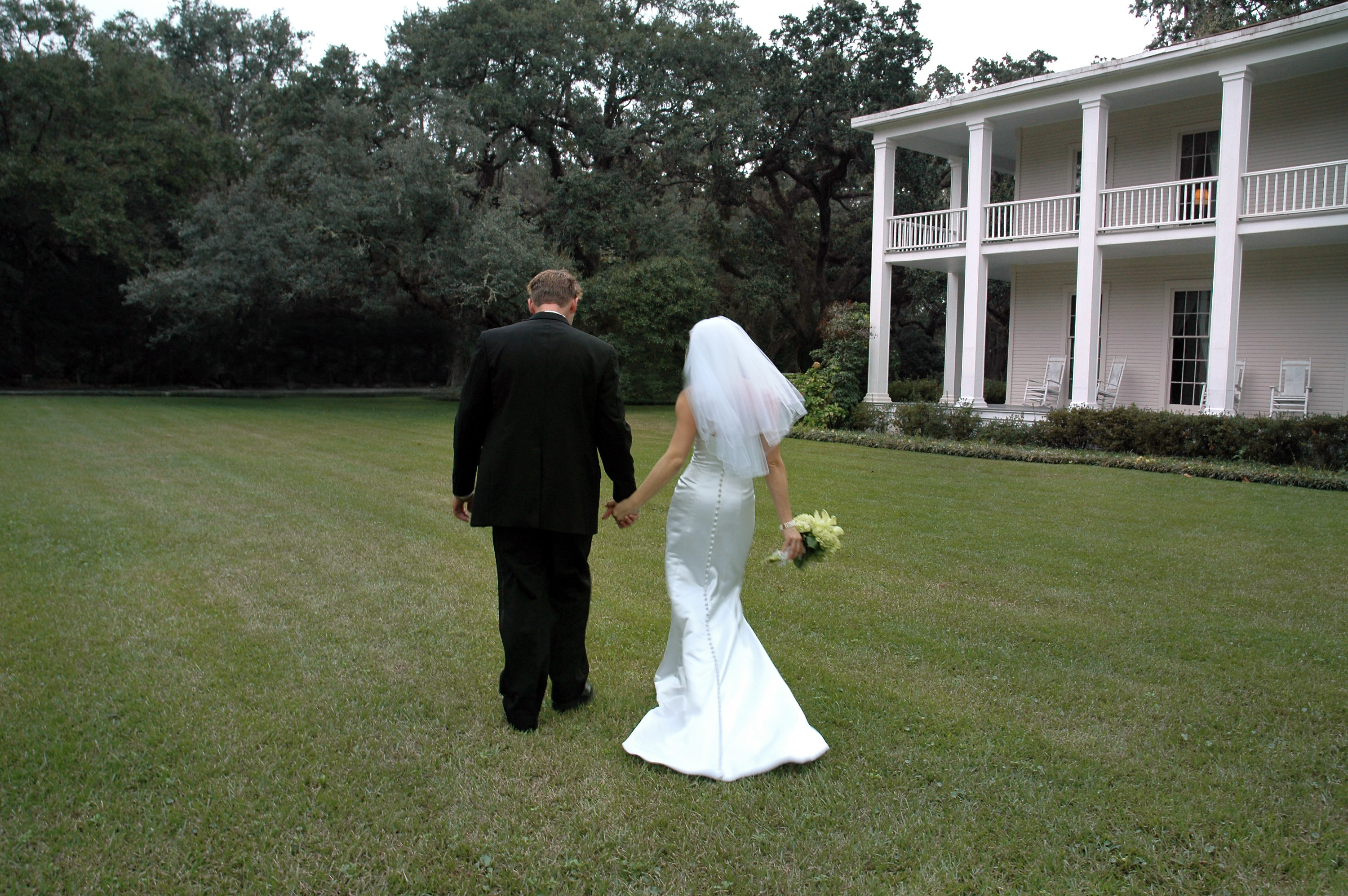 A bride and groom stroll on the grounds of a southern plantation in this stock photo.

Although plantations will still be able to list themselves as venues, Sivajee said the new guidelines are meant to ensure that wedding vendors aren’t referring to plantations using language such as “elegant” or “charming.”

“We want to make sure we’re serving all our couples and that they don’t feel in any way discriminated against,” she said.

Noting that the new language guidelines would apply to all wedding venues that list on the Knot websites, not just venues that market themselves as plantations, Sivajee added, “You can imagine there could be former plantations that maybe have changed their names to manors or farms.”

A Pinterest spokesperson told BuzzFeed News that the company will restrict plantation wedding content on its website, and is working on de-indexing Google searches for plantation weddings on Pinterest. Though users can still search for it, they’ll see an advisory that some of that content may violate Pinterest’s policies.

“Weddings should be a symbol of love and unity. Plantations represent none of those things,” the Pinterest spokesperson wrote in an email. “We are working to limit the distribution of this content and accounts across our platform, and continue to not accept advertisements for them.” 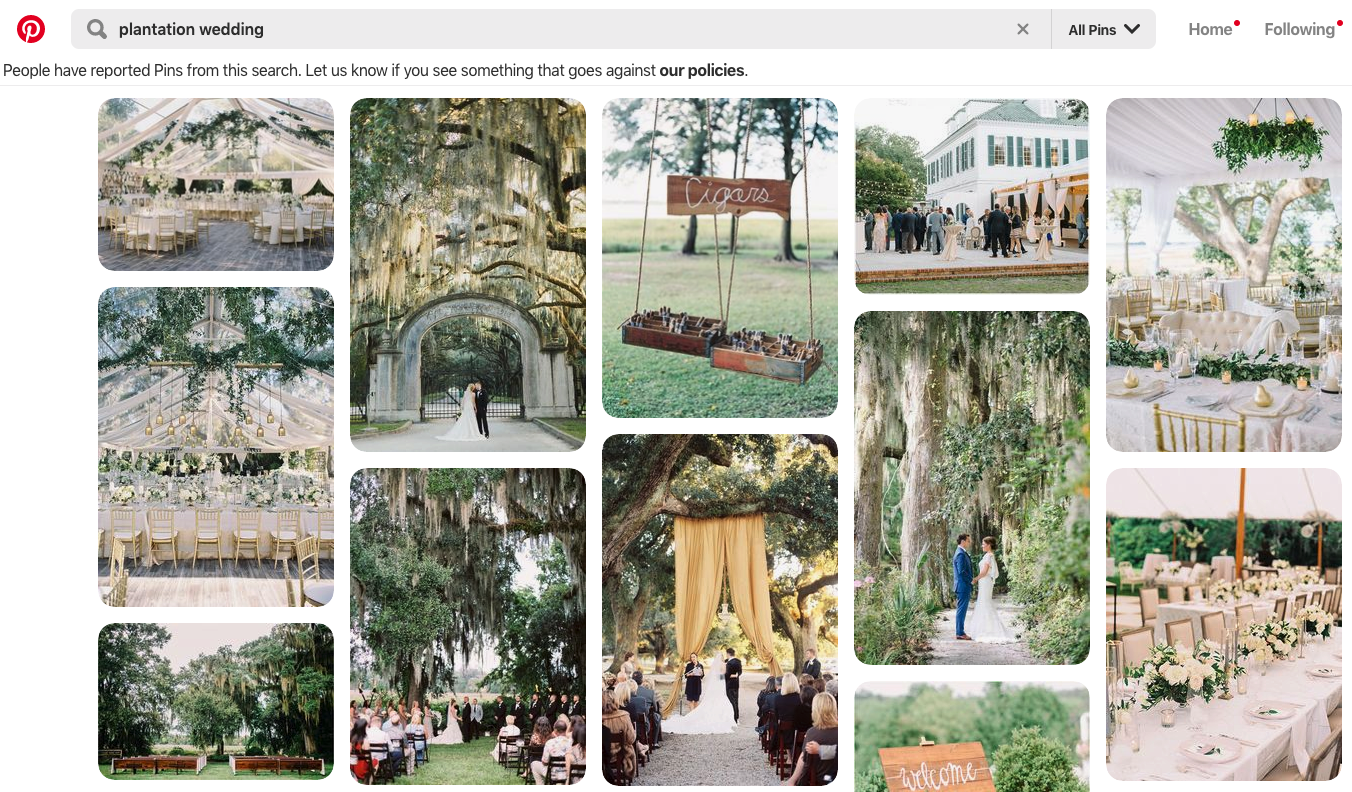 The decision comes amid pressure from Color of Change, a civil rights advocacy group, urging the companies to stop promoting plantations that formerly had slaves as wedding venues altogether.

“The decision to glorify plantations as nostalgic sites of celebration is not an empowering one for the Black women and justice-minded people who use your site,” the organization wrote to the Knot Worldwide executives in a letter reviewed by BuzzFeed News. Pinterest also received a similar letter from the group.

“Plantations are physical reminders of one of the most horrific human rights abuses the world has ever seen,” the letter said. “The wedding industry routinely denies the violent conditions Black people faced under chattel slavery by promoting plantations as romantic places to marry.”

The Knot Worldwide will work with Color of Change to hammer out new guidelines applicable to every vendor on its platform. Sivajee said she expects the new policy to be released in the next few weeks, adding that the company will comb through every vendor and venue to make sure they’re following the guidelines. 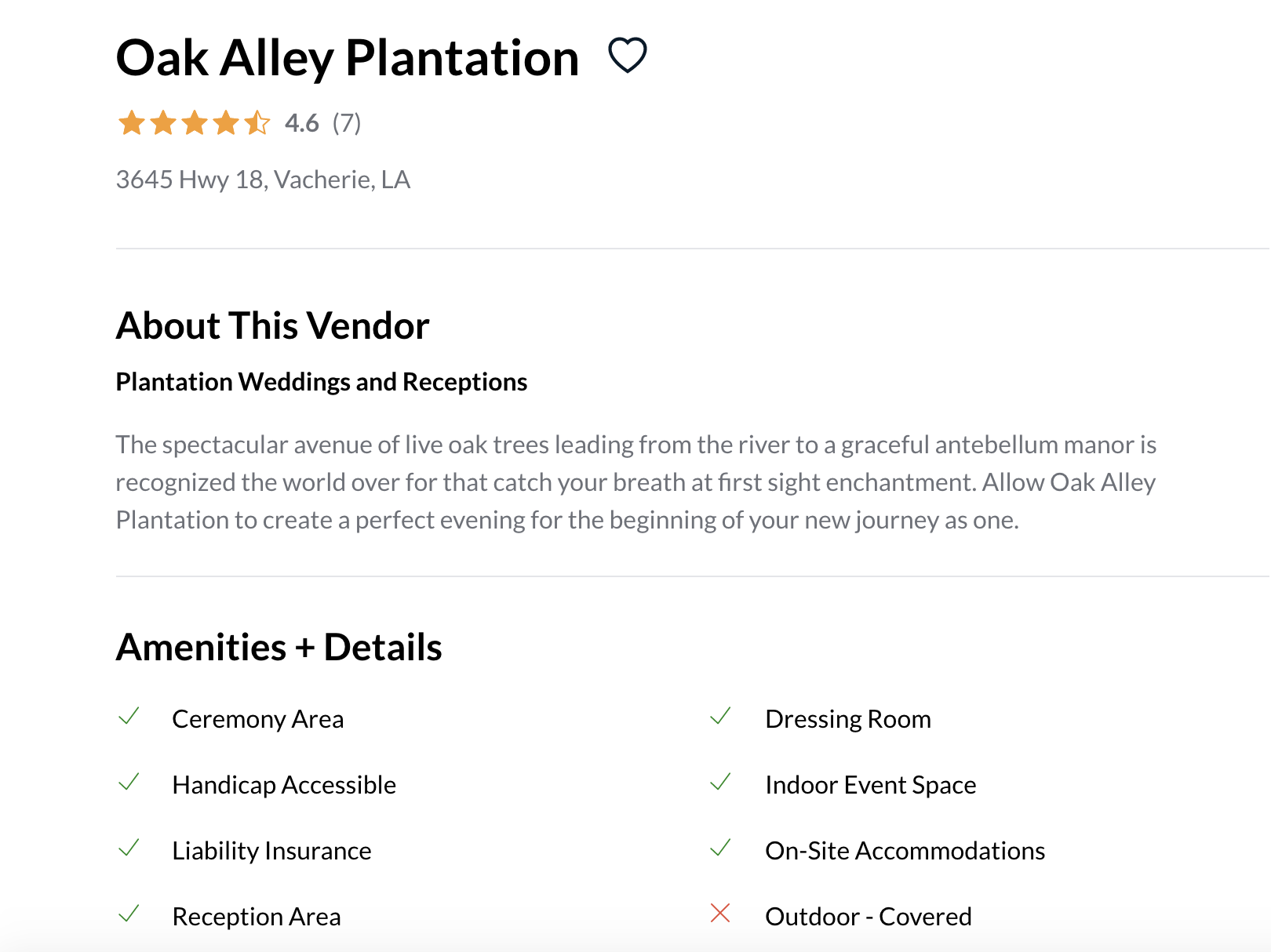 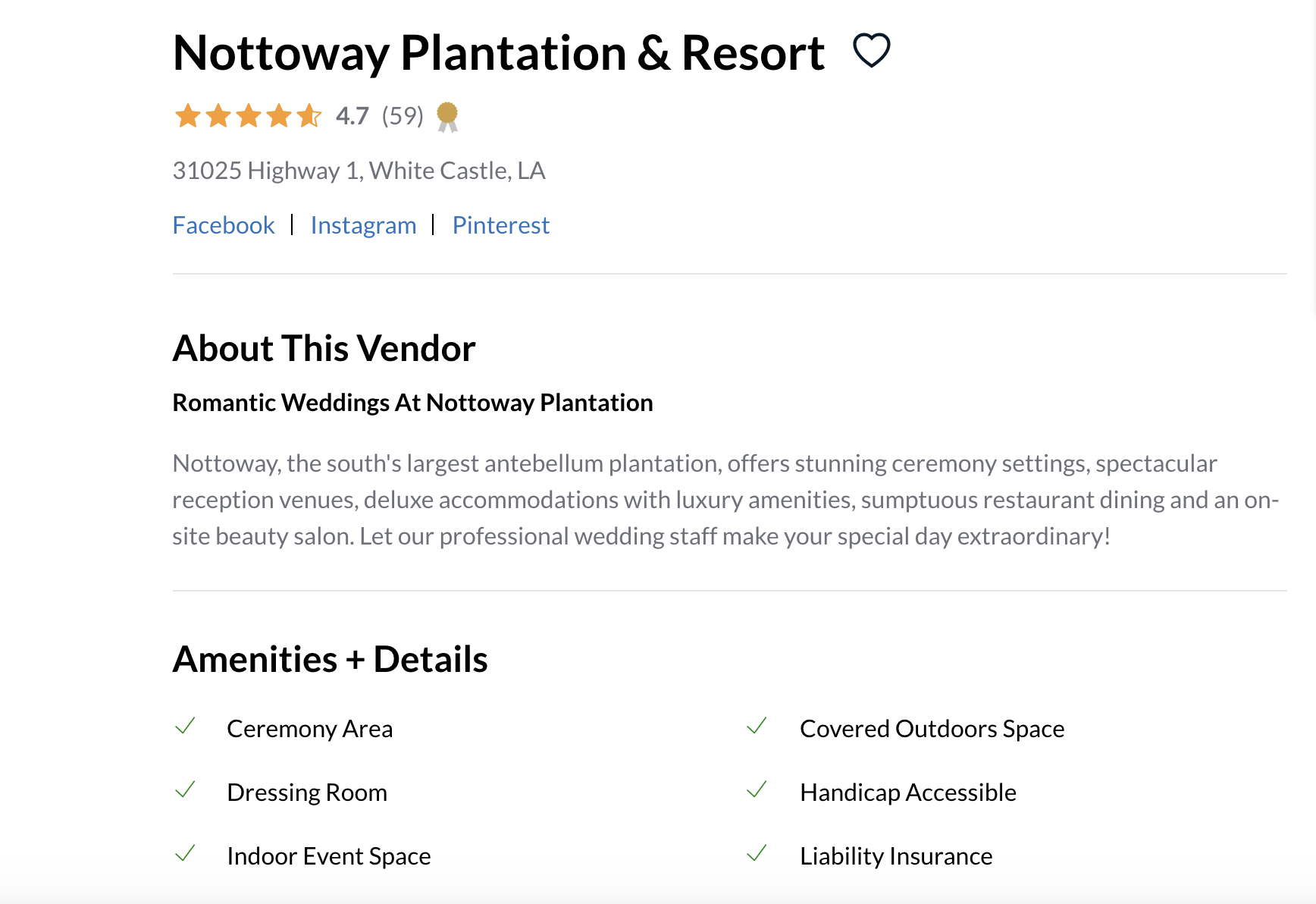 Plantation venues listed on the Knot.

The US wedding industry took in some $76 billion in revenue in 2019, according to market research firm IBIS World, and the money venues raked in makes up a large chunk of the pie. The average cost of a wedding today is $30,000, but that number varies depending on area, too. Websites like Pinterest provide ideas for weddings down to the very detail, and platforms like the Knot offer planning tools for couples and connect them with vendors.

Plantation weddings are not new. Since successfully rebranding as romantic venues evoking the nostalgia of antebellum charm, former slave plantations have become popular locations for weddings in the south; actors Blake Lively and Ryan Reynolds held their wedding at Boone Hall Plantation, where dozens of black people were enslaved.

But there is growing discussion about the appropriateness of celebrating a wedding in a location where generations of black people were enslaved and tortured.

Arisha Hatch, the vice president of Color of Change, told BuzzFeed News the organization’s campaign is meant to expose “all the different ways that the wedding industry is disrespecting black folks by romanticizing … forced labor camps that brutalized millions of slaves.”

“If we were talking about concentration camps, it would be weird and disrespectful and egregious for folks to be seeking to have their weddings at these locations,” Hatch said. “We’re trying to elevate public awareness around the ways in which corporations can enable such disrespectful behavior.” 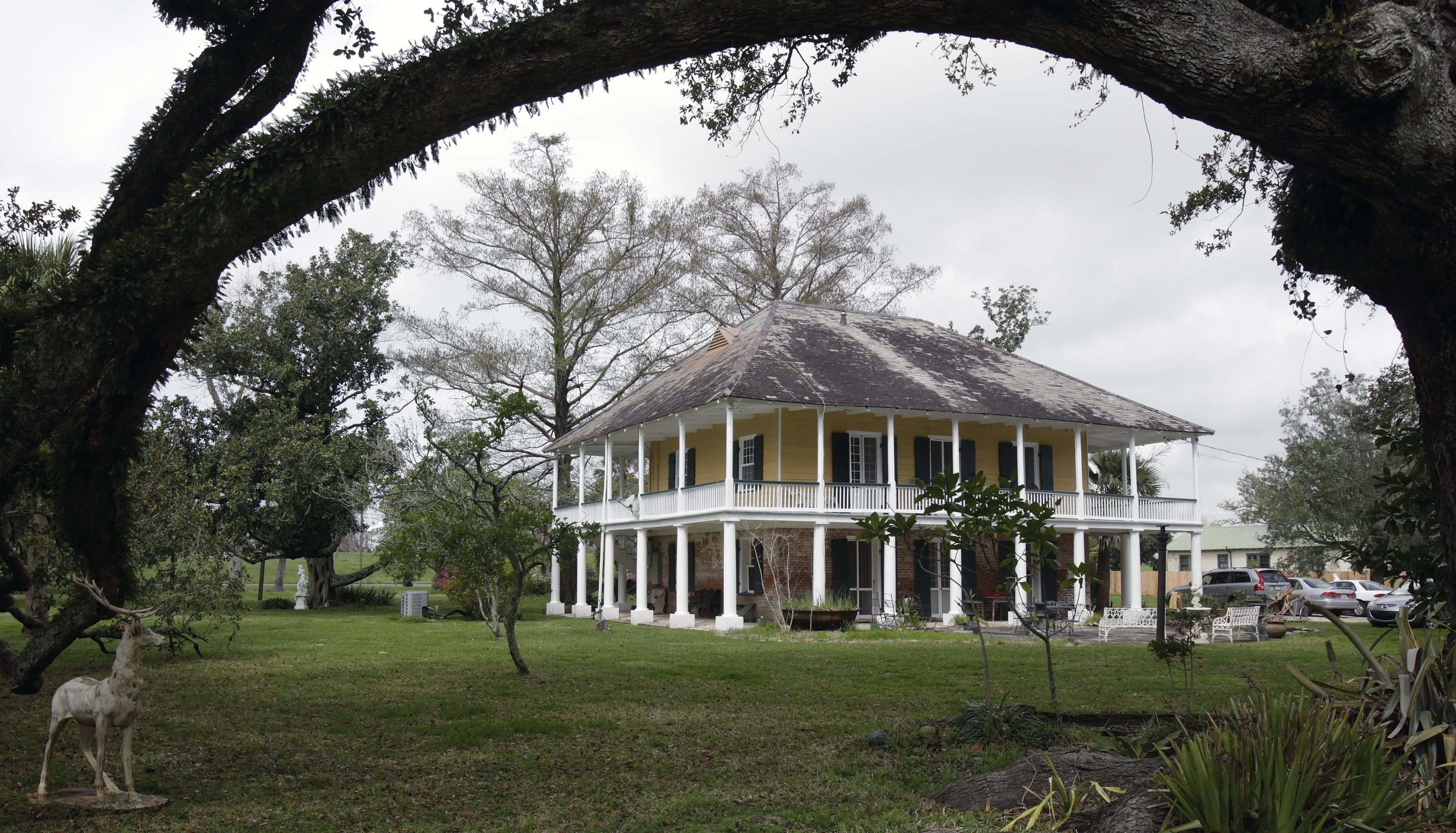 This 2012 photo shows the Mary Plantation in Braithwaite, Louisiana. The venue still advertises for weddings on its website.

Rather than target the plantations that host weddings, Hatch said the Color of Change campaign focused on wedding-planning platforms because they don’t profit directly from these weddings, and therefore may be more motivated to hearing concerns about these plantation venues.

“We understand that these wedding platforms have less of a stake in continuing to promote these sites, versus the plantations themselves,” she said. “While it won’t end the practice entirely, [this campaign] will hopefully begin to shift how the broader public thinks about this sort of celebration.”

Color of Change has sent similar letters about plantation weddings to Zola, Martha Stewarts Weddings, and Brides, as part of the campaign.

Zola, another leading wedding planning platform, removed some references in its blog posts to plantation wedding venues after Color of Change sent the company a letter, according to link archives reviewed by BuzzFeed News. But other references to plantation-themed weddings remain on the website, and Hatch said Color of Change has not heard from Zola.

Emily Forrest, a communications manager for Zola, told BuzzFeed News about the letter: “After reviewing this complaint we determined it did not violate our non-discrimination policy. While we may not always agree with couples on all of their wedding details, we also respect their right to choose where and how they want to get married.”

When asked for clarification about whether the Zola blog posts mentioning plantation weddings were a violation of the company’s nondiscrimination policy, Forrest declined to respond and instead directed BuzzFeed News to the policy on Zola’s website.

Color of Change did not hear back from Martha Stewart Weddings and Brides, Hatch said. Neither company responded to BuzzFeed News’ requests for comment.

Related posts:
Tags: and, Knot, Pinterest, St, THE, Will
Recent Posts
Categories
We and our partners use cookies on this site to improve our service, perform analytics, personalize advertising, measure advertising performance, and remember website preferences.Ok