The pandemic is still raging, but arts workers in France want to know when cultural life can restart. 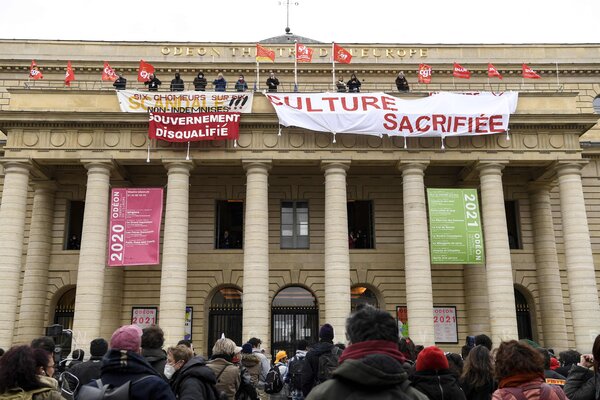 By Laura Cappelle and Alex Marshall

PARIS — Dozens of protesters stood outside the La Colline theater here on Wednesday, waving signs. “Better ‘The Rite of Spring’ than a massacre until spring,” read one; “We want to dream again,” said another.

The protesters were there to support others inside the building who have occupied the playhouse since Tuesday, demanding the reopening of theaters across France.

Cultural institutions here have been closed since October, when rising coronavirus cases led the government to heavily restrict social life. France has lifted some restrictions since, including on some stores, but there is still a 6 p.m. to 6 a.m. curfew in cities, restaurants can only offer takeout, and museums, music venues and movie theaters remain closed.

Protesters, most of them actors, theater workers and students, now occupy at least seven theaters across the country — including the Odéon Theater in Paris and the National Theater of Strasbourg — in the hope of forcing the government to restart cultural life.

“We want to bring life back to these venues, not blockade them,” said Sébastien Kheroufi, a drama student and one of the occupiers at La Colline.

Frustration at the continued shutdown of cultural life in France has been building for weeks. Last Thursday, trade unions representing arts workers organized more than 30 protests around the country to demand a reopening date, as well as an extension to special unemployment benefits for actors and musicians.