He was adept at a range of instruments, particularly the congas and timbales, and he could make himself at home in almost any ensemble. 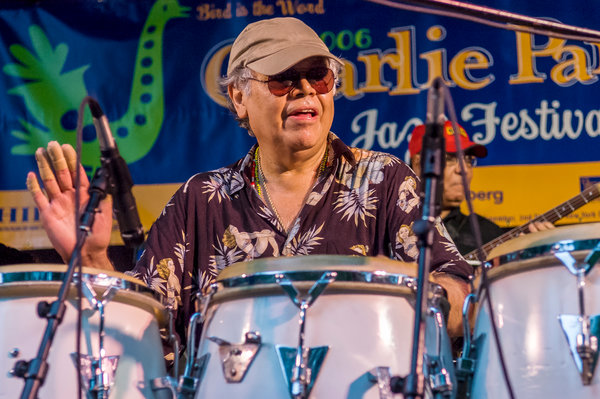 Ray Mantilla, a percussionist and bandleader whose career spanned six decades and an array of styles in jazz, Latin music and beyond, died on March 21 in Manhattan. He was 85.

His brother Kermit said the cause was complications of lymphoma.

Mr. Mantilla never quite became a star in his own right. But he was one of the most respected percussionists in American music, adept at a range of instruments — particularly the congas and timbales — and able to make himself at home in almost any ensemble.

He tended to use a full suite of congas, sometimes four at once, each differently tuned, together forming a drum kit of its own.

He was 44 and almost a quarter-century into his professional career when he released his first album as a leader, “Mantilla,” in 1978. By that point, he had reached at least the third phase of a protean musical existence.

He had come up as a fan of the major midcentury Latin bandleaders and became well-versed in the fundamentals of Afro-Cuban percussion. By his mid-20s, he found himself enamored of jazz and shifted in that direction. And eventually he explored a fusion of the two worlds in the bands he led, while taking on an increasingly diverse inventory of work as a side musician.

He played on hundreds of recordings throughout his life, including “We Insist! Max Roach’s Freedom Now Suite,” Herbie Mann’s “At the Village Gate,” Charles Mingus’s “Cumbia & Jazz Fusion” and even “I Am Gloria Gaynor,” by the disco star.

Over the latter half of his career, he released nine discs under his own name.

Raymond Mantilla was born in the South Bronx on June 22, 1934, to Ramona Maldonado and Carlos Mantilla Ghilardi. His father, who hailed from Peru, was an architect and engineer who helped build the George Washington Bridge and played the guitar at home. His mother, who had been born in Puerto Rico, owned and operated a bodega.

In addition to his brother Kermit, Mr. Mantilla is survived by two other brothers, Lisandro Gilberto and Rolando; his sisters, Irma Ogden and Sara Kelly; a grandson; and his companion of 20 years, Judy Levy. Both of Mr. Mantilla’s marriages ended in divorce. A son, Robert, died before him.

Young Ray played semiprofessional baseball and dreamed of the big leagues throughout his adolescence. But then he heard the Cuban bandleader Machito’s music on the radio for the first time, and he was immediately galvanized.

“When I heard those drums, that’s when I first started to realize I had something: a vocation, they call it,” Mr. Mantilla told the jazz historian Maxine Gordon in an interview for the Bronx African-American History Project at Fordham University.

He started hanging out at the local Y.M.C.A., where young musicians would jam. At first he played on a coffee can, but eventually he bought himself a conga drum.

His friends in the South Bronx included future stars like the pianist Eddie Palmieri, the flutist and percussionist Johnny Pacheco and the percussionist Manny Oquendo. All of them were fusing mambo, traditional Afro-Caribbean music and jazz, creating a new approach that would become broadly labeled “salsa.” Like many musicians, Mr. Mantilla came to resist the term, saying that a single genre name obscured the complexity of the music.

Mr. Mantilla developed his talents alongside his fellow percussionists Ray Barretto and Benny Bonilla, both of whom went on to lauded careers. It was Mr. Barretto, his closest friend and counterpart, who recommended Mr. Mantilla for his inaugural studio date.

Mr. Mantilla played his first professional show in the singer Eartha Kitt’s band, taking a break from his own honeymoon to make the gig. In 1960, Mr. Barretto brought him into Mr. Mann’s band, where he stayed for three years. For a time, they were a percussion tag team in that group before Mr. Barretto departed, leaving Mr. Mantilla in charge of the percussion chair.

Playing in the Mann band planted a creative seed, and Mr. Mantilla soon found himself gravitating toward jazz.

He particularly impressed drummers, and in the early 1970s he was approached by two of jazz’s finest: Max Roach, who brought him into the all-percussion ensemble M’Boom, and Art Blakey, who made him a member of his band, the Jazz Messengers. (He had briefly recorded with Roach years earlier, on the landmark “We Insist!”)

In 1977, Mr. Mantilla joined Dizzy Gillespie in the first ensemble of musicians from the United States to perform in Cuba since the embargo was put in effect in the early 1960s. A year later, he released “Mantilla” on Inner City Records, an independent label. An erudite if also rambunctious fusion effort, it featured four jazz-musician bandmates.

Mr. Mantilla soon named that band Space Station, and on future recordings he would use it to experiment with odd time signatures in a Latin fusion context — something few had tried before.

By the mid-1980s, Mr. Mantilla had expanded his horizons further and was working with avant-garde improvisers and composers in the Association for the Advancement of Creative Musicians; he recorded with both the pianist Muhal Richard Abrams and the pianist and vocalist Amina Claudine Myers.

No matter where the music took him, he remained proud of his roots in the South Bronx. “I’m a street drummer,” he told Ms. Gordon. “Congas are street drumming things, man. You can’t write music for that.”

Even as he battled cancer in his later years, Mr. Mantilla never gave up playing. He put out his latest album, “High Voltage,” in 2017. Another, titled “Rebirth,” is expected to be released this year on Savant Records.