PARIS — How many women had professional careers as playwrights in prerevolutionary France, between the 16th and 18th centuries? Go on, hazard a guess.

The answer, according to recent scholarship, is around 150. Yet if you guessed the number was close to zero, you’re not alone. For decades, the default assumption has been that deep-seated inequality prevented women from writing professionally until the 20th century.

Now a growing movement within French theater is reclaiming the work of forgotten female artists, and reviving a lost concept along the way: le matrimoine. Matrimoine is the feminine equivalent of patrimoine — translated as patrimony, or what is inherited from male ancestors. In French, however, patrimoine is also the catchall term to describe cultural heritage. By way of matrimoine, artists and academics are pushing for the belated recognition of women’s contribution to art history, and the return of their plays to the stage.

Matrimoine is no neologism. “The word was used in the Middle Ages but has been erased,” said the scholar and stage director Aurore Evain. “Patrimoine and matrimoine once coexisted, yet at the end of the day all we were left with was matrimonial agencies.”

When Dr. Evain started researching prerevolutionary female authors, around 2000, she quickly realized that French academics were behind their American peers. In the early 1990s, Perry Gethner, a professor of French at Oklahoma State University, had already translated plays by Françoise Pascal, Catherine Bernard and other 17th- and 18th-century women into English, and published them.

At home, on the other hand, the idea that female colleagues of Molière had been overlooked collided with entrenched narratives. The classical French repertoire revolves around a trinity of male playwrights — Molière, Jean Racine and Pierre Corneille — whose works are taught in schools and widely seen as models of national literary genius.

Yet all three men crossed paths with acclaimed female peers. “Le Favori” (“The Male Favorite”), a verse tragicomedy written in 1665 by Madame de Villedieu, was performed by Molière’s own company before the king at Versailles. When Dr. Evain staged it again in 2015, over three centuries after it was last performed, the French playwright and director Carole Thibaut was struck by the similarities between “Le Favori,” which revolves around a courtier who challenges the hypocrisy of royal favor, and Molière’s “Misanthrope,” written the next year. 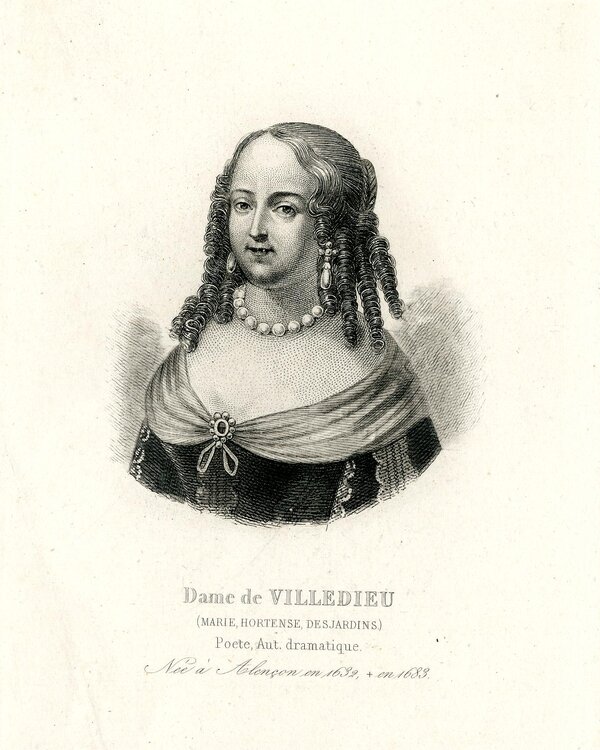 “I love Molière, but there are two scenes that are basically plagiarism,” Thibaut said in a phone interview. “He borrowed heavily from ‘Le Favori.’”

Before the French Revolution, most female playwrights were upper-class single women who needed to earn a living. In the 19th century, their numbers kept growing: Scholars have found at least 350 women who were paid for their writing, from the revolutionary activist Olympe de Gouges to Delphine de Girardin, both of whom had plays in the repertoire of the Comédie-Française. Many of them hosted literary salons, starting with Germaine de Staël; some, like George Sand, also wrote under a pseudonym to get around gender-based prejudice.

Yet not a single one of these women has a meaningful presence on the French stage today. Until the late 2000s, even feminist writers knew nothing of their work. The first volume of a French anthology of prerevolutionary female playwrights (edited by Dr. Evain, Gethner and the New York University professor Henriette Goldwyn) wasn’t released until 2007.

When Thibaut, who is now at the helm of a National Dramatic Center in the city of Montluçon, first heard Dr. Evain speak at a conference two years later, the notion of matrimoine came as a revelation. “I fell apart. I started crying,” she said. “She taught me that instead of being at the dawn of a feminist awakening, we were part of a cycle, which sees women emerge and then be erased.”

That historical insight coincided with a renewed focus on gender inequality in French theater, in the wake of two government audits. Until 2006, none of the five national French theaters had ever had a female director. There has been some progress since: While only 7 percent of national and regional dramatic centers, the next tier of public institutions, were led by women in 2006, the proportion was 27 percent in 2019. Still, in March, an open letter published in the French newspaper Libération complained about the lack of women being appointed to top theater jobs since the start of the pandemic.

From 2009 onward, Thibaut, Dr. Evain and other activists joined forces through an association, known as HF, to push for change, and matrimoine became one of their rallying calls. In 2013, Dr. Evain launched the annual “Days of the Matrimoine,” a festival that runs alongside the “Days of the Patrimoine,” a national celebration of France’s cultural heritage.

That visibility is now affecting younger generations of scholars and artists, like Julie Rossello Rochet, a playwright who completed a doctoral dissertation last year on her 19th-century predecessors. In a phone interview, she said that studying their work had helped her process the unease she felt as a young writer: “I kept hearing, ‘Oh, it’s so rare, a woman who writes for the stage.’ Actually, it isn’t.”

The scholars interviewed agreed that women’s plays offer a different perspective from that of male playwrights — a female gaze, so to speak, shaped by the authors’ life experiences. “They promoted women’s intelligence,” Dr. Rossello Rochet said.

“They created strong female characters, who choose politics over love, as well as male characters who choose love,” said Dr. Evain, who also pointed to the attention they paid to the role of fathers.

The two prerevolutionary plays Dr. Evain has directed since 2015 speak to that originality. In addition to “Le Favori,” she brought back Madame Ulrich’s “La Folle Enchère” (“The Mad Bid”), a comedy that had its premiere in 1690 at the Comédie-Française. The plot cleverly toys with gendered expectations: In it, an older woman endeavors to marry a younger man, who is himself a woman in disguise. “It’s an early queer play, in which everything is upside down,” Dr. Evain said. “Order is never restored: The leading lady is in drag until the end.”

While a handful of smaller theaters, like the Ferme de Bel Ebat in Guyancourt, have welcomed productions like “La Folle Enchère,” persuading programmers to invest in the matrimoine remains a challenge. The Comédie-Française, where multiple women have presented their work over the centuries, has yet to revive a single one of these plays.

In an interview with the French newspaper Le Monde in 2017, the troupe’s director, Eric Ruf, said he was “working on it,” but added that it would be hard to sell main-stage tickets for a “little-known” playwright. (A spokeswoman for the Comédie-Française declined to say whether there were plans to bring back plays by women in future seasons.)

Yet feminists believe that unless these early women’s plays are performed and taught, history may yet repeat itself. “If we ignore our matrimoine, if we don’t change the way we think about our culture, the women who came after us may not leave a legacy, either,” Thibaut said.

In the eyes of Dr. Rossello Rochet, the benefits are obvious for young playwrights. “Having a history has given me deeper roots,” she said. “It has made me feel stronger.”