Rocketing up through two and half octaves, the glissando that starts Gershwin’s “Rhapsody in Blue” is a siren cry, an announcement of joy and chutzpah that has also come to mean “I love New York City.” On Saturday night, when the pianist Conrad Tao played it in the rotunda of the Guggenheim Museum, the dancer Caleb Teicher ran in and gave Nathan Bugh, a fellow dancer, a big fat hug.

This was funny and sweet — perfect, really, as an expression of the moment’s emotion. For there we were, a live audience, masked and carefully spaced on the rotunda’s spiral walkway, experiencing live performance indoors. Spring is here! The pandemic is over! Everybody embrace!

That’s what it felt like for a moment, at least. The pandemic isn’t over, of course. And while this performance of Caleb Teicher & Co. inaugurated the in-person return of the Works & Process series — with more performances scheduled through June by companies who have rehearsed in bubble residencies upstate — all such arrangements are tentative. NY Pops Up performances of Teicher’s company, scheduled for the same day, were canceled because of new protocols. And indoor performances scheduled this week at the Park Avenue Armory have been postponed because some cast members tested positive for Covid-19. 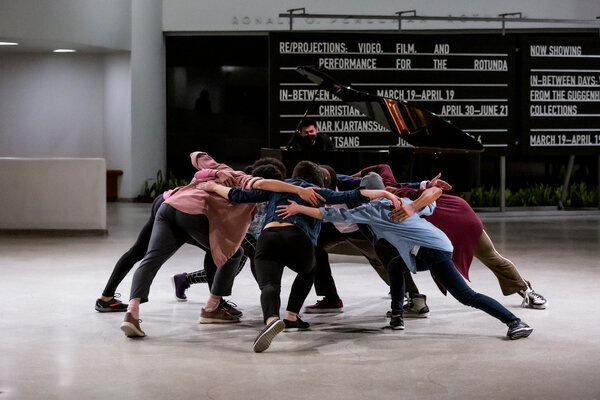 Teicher and the gang acknowledged this precarity, too. The second time that Tao’s fingers rippled up to the high note, another pair of dancers stopped short of contact and settled for an elbow bump. Again, this was funny, but in retrospect, the big hug and the elbow bump seemed to sum up an event that was both wonderful and less than ideal.

It began the way the last prepandemic Works & Process event, a Teicher show, ended back in February 2020: with Bugh doing the Lindy Hop by himself to music in his head. Despite the resonance, this was an awkward opening. And the selection that followed, a piano interlude — Brahms’s Intermezzo in E minor — felt a bit random, though Tao suspended time in freezing cascades of sound.

“Rhapsody in Blue” was the main event, and Tao’s rendition (of his own arrangement for solo piano) was monumental, as big as the building. It was too big for Teicher and the dancers to match, but their let’s-put-on-a-show attitude gave the effort the innocent charm of “Peanuts” cartoon.

The rhythmic irregularity of “Rhapsody” poses a choreographic challenge. Teicher met it ably with solos, duets and group encounters, all with a story-like suggestion of collisions and rendezvous in the city. Drawing from Lindy vocabulary, the dance was pleasingly arranged in circles and other shapes fit for the rotunda and meant to be seen from above. Sometimes, large, slow Charleston steps were set excitingly against the music’s drive, and several duets, blithely disregarding traditional gender roles, caught the music’s tenderness and romance.

It was also charming when, near the end, Tao geared up again for another of the score’s famous ascents and the dancers hesitated, as if to admit the futility of keeping up with the pianist. But on the next high note, they smashed together in a group hug before running off with arms extended, like planes in an ad for United Airlines. Gershwin’s “Rhapsody” has been used in many ways over the years. On Saturday, it made the air around us less frightening and more friendly.

Performed on Saturday at the Guggenheim Museum.