“The first time I walked into a gay bar,” Ryan J. Haddad tells us, “the first thing I encountered was a staircase.”

That staircase was both a physical challenge — Haddad has cerebral palsy — and a metaphor. The gay world, supposedly so welcoming to all kinds of difference, was not welcoming him.

It isn’t prudery that stops him; well beyond sex-positive, he’s sex-vehement. “I have a higher sex drive than anyone in this room, OK?” he shouts to the audience at Woolly Mammoth Theater Company, where the show was filmed. (A coproduction of Woolly Mammoth, in Washington, and IAMA Theater Company, in Los Angeles, it is streaming through Feb. 28.) To make sure you get the point, Haddad, who has described himself as a “hairy twink of Middle Eastern descent,” opens the play with a fit of phone sex that leaves little to the imagination.

Nor is Haddad’s path to boyfriend bliss blocked by a lack of self-esteem. Having been raised by parents who refused to let his leg braces interfere with a healthy sense of entitlement, he sees himself as desirable with no asterisks.

But the men he keeps running into — or, to be fair, the men he favors at bars and on dating apps — collectively personify an encyclopedia of microaggression. Some “can’t be cool” with his mobility issues. (He often uses a walker.) A Vietnam vet assumes he’d be impotent. A man Haddad rejects as “not being my type” tells him, “With all your problems, you’d be lucky to take whatever you can get.”

Unlike the sweet (and “equally gorgeous”) character played by Ryan O’Connell on the Netflix series “Special” — also about a gay man with cerebral palsy — the persona Haddad devises for “Hi, Are You Single?” lives somewhere near the border of campy and cutting. (Edith Bouvier Beale and Elaine Stritch are referenced.) At least for the first half of the show, he’s fully in charge, taking all roles, calling the members of the audience “darlings” and singling out some for teasing and flirting in a manner more familiar from drag shows than drama. At other times, he lets the tale veer into the baldly instructive aesthetic of public service announcements.

But when Haddad’s fierce facade begins to crack, what has felt like a performance piece begins to seem more like a play. He lets us see how his mission — which often has him “parading” around bars saying “Hi, are you single?” to any man he can find — might betray a kind of desperation that has little to do with exclusion.

And when he ghosts several appealing prospects for reasons (such as age) that are no more defensible than those used against him, he is forced to admit that he’s as hypocritical as anyone when it comes to welcoming difference. 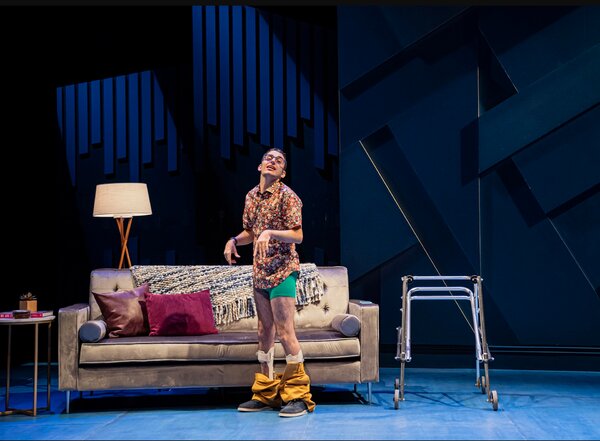 I wish “Hi, Are You Single?” spent more time dramatizing that universal dating knot: How do you know what’s categorical prejudice and what’s a simple lack of attraction? I also wish the production itself, directed by Laura Savia and Jess McLeod, were more graceful. (Filming it under pandemic conditions can’t have helped.) It too often feels more academic than theatrical, perhaps because it was begun when Haddad was actually still in college.

But as a bulletin from the front lines of social inclusion, “Hi, Are You Single?” is compelling and fresh despite its awkwardness. That’s most obvious in its sexiest scenes — as when Haddad gets a thrilling, if exhausting, lap dance from a go-go boy named Geronimo.

You feel it even more deeply, though, in moments that aren’t so manic. The loveliest of these is a scene in which Haddad asks a man for a dance — this time a slow one. Usually the man is a stranger selected from the audience and brought onstage. But in the filmed version, for pandemic safety reasons, Haddad’s partner is a member of his production bubble: Lawrence E. Moten III, the scenic and costume designer.

They are both masked — and Moten, in answer to the title question, is not even single. But as a model of intimacy that literally embraces difference, their quiet, thoughtful face-to-face could hardly be more welcome.

Hi, Are You Single?
Through Feb. 28; woollymammoth.net

Tags: Are You Single?, Hi, Theater, Wo
Recent Posts