Christopher Nolan is that rare beast: an art house auteur making intellectually ambitious blockbuster movies that can leave your pulse racing and your head spinning.

Ridley Scott had the same knack, as did Stanley Kubrick: the wit to combine a vivid imagination with unabashed showmanship in order to explore complex ideas such as time and space and consciousness in the context of an epic, all-action movie.

To this, Nolan adds a mastery of mixing genres. Inception was a sci-fi-heist movie, The Dark Knight a comic-book thriller.

He’s at it again with Tenet, which is a globe-trotting sci-fi-spy drama starring John David Washington as The Protagonist, who is given the not insignificant task of saving humanity from certain radioactive Armageddon in a looming World War III.

It’s a big ask, but arguably not as big a challenge as the one Nolan has been set with Tenet – which is basically to save the world of cinema from the potentially terminal twin threats of streaming giants and Covid-19. It’s a combination of an unseen, mutating enemy and an insurgent fifth column, which, in terms of themes, sounds like a Nolan movie.

He hasn’t shirked his responsibilities. 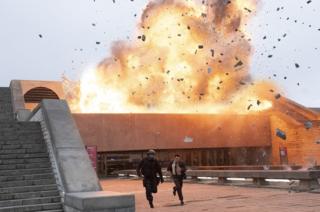 Tenet is a big movie (shot on a mixture of Imax cameras and 70mm film) with a big budget (reported at around $200m/£153m), which is designed to be seen on the big screen. It is a piece of what is now called “event” cinema, an immersive experience to stimulate all the senses, which it does, from Ludwig Göransson’s throbbing Wagnerian score to visual effects company DNEG’s eye-boggling CGI.

In terms of spectacle, Tenet delivers. The stunts, the camera work and the scale are impressive. As is Nolan’s appetite to use blockbuster entertainment as a platform to seriously consider existential threats, the unconscious mind, and cutting-edge physics.

In the past, he’s given us esoteric stories of implanted dreams (Inception) and alternative universes (Interstellar), both of which felt more like fiction than science. That’s not the case with Tenet, in which Nolan – who is both writer and director – grapples with the concept of time in a manner that made the incredible seem credible.

Frankly, there’s a lot to get your head around. The clue is in the movie’s title, which not only refers to the ethical codes of conduct (tenets) expected by the ultra-secret society into which Washington’s Protagonist has unwittingly been inducted, but also to its palindromic form, an allusion to the way in which Nolan is asking us to think about time. That is, it goes both ways – forwards and backwards, sometimes simultaneously.

The upshot of which being, events that occur in the future can be revisited in the past, an idea illustrated in the Grandfather Paradox, which posits if a person travels back in time and kills their own grandfather before his or her parents were conceived, it would prevent the time-traveller’s existence.

That’s at the easier end of the temporal concepts Nolan has us grapple with, which include entropy reversal, time inversion, temporal pincer movements, and reverse cryogenology (I might have misheard that one).

If that all sounds a tad complicated, you should try showing it on film. There are car chases in which The Protagonist is going forwards when all else is in reverse, fist fights that take place over millennia but happen in the same time and space, and bullets that seal rather than penetrate.

Nolan is challenging our preconceptions of time and suggesting there might be an alternative way of looking at it beyond a limited notion of linear progression. It’s confusing to begin with, but by about mid-way through the film starts to make narrative sense, to such an extent that plot twists at the end are rather predictable (or, maybe that’s some super clever meta-narrative device that validates the film’s conceptual argument).

In fact, the entire plot is rather predictable, which I suppose makes room for all the thinky physics stuff.

It’s a Bond-like set-up. The Protagonist is the goodie: a Western agent working for a morally sound, state-backed, above-the-board secret service. The baddie is Andrei Sator, an unscrupulous Russian businessman played with great vigour but not a lot of subtlety by Kenneth Branagh.

He is married to the glamorous Kat (Elizabeth Debicki), a British art expert working for an international auction house, who foolishly gave her husband a fake Goya: a professional and personal misjudgement that has allowed the evil Andrei to blackmail her into not leaving him. Unless, that is, she agrees never to see their little son Max (Laurie Shepherd) ever again, thereby depriving her of the joy of picking him up from his posh north London prep school.

Andrei is hell-bent on putting together the wherewithal to erase the past, present and future of the world. The Protagonist is heaven-sent to stop him. Kat is the key, a love triangle plot device that might work on paper but doesn’t in the film where there is little emotional spark or screen chemistry between her and either Andrei or The Protagonist – or Max for that matter.

You’re left wondering why the two men are willing to stake everything that has ever been or will ever be on a bit of a cold fish with whom neither appear remotely enamoured.

I’m not sure why there is such an apparent lack of connection between the main players. Maybe it’s the script, or possibly that the characters are too simplified, although Washington does a good job in fleshing out The Protagonist, as does Robert Pattinson in his role as an English adventurer type, Neil.

Perhaps it’s the high-definition filming and extreme close-ups, which show every pore in the actors’ skin, that leads to some scenes having a mannered awkwardness.

To that extent, it’s certainly not Bond, but then, it’s not not Bond either. There are action sequences with Bond-like levels of spectacle, and interior scenes in which you sense The Protagonist actively putting his tanks on 007’s lawn with his own bone-dry quips (asked how he would like to die, he replies: “Old”).

What differentiates Tenet are the bigger ideas in which Nolan is framing his story. It turns what could have been a sub-Bond action-packed spy movie into an inventive, bold and thought-provoking interrogation into our perception of time.

It won’t leave you shaken, but your mind will be stirred. And that has to be worth a trip to the cinema.

Tenet is released in the UK on Wednesday, 26 August.

Recent reviews by Will Gompertz:

Tags: film, get, hoping, review:, THE, to
Recent Posts
We and our partners use cookies on this site to improve our service, perform analytics, personalize advertising, measure advertising performance, and remember website preferences.Ok