Robert Bechtle, a photorealist painter who depicted suburban landscapes, parked cars and the way the California light slants on a stucco building at midday, died on Sept. 24 at a hospice facility in Berkeley, Calif. He was 88.

His son, Max, said the cause was Lewy body dementia.

Like his fellow photorealists Ralph Goings and Richard Estes, Mr. Bechtle used photographs as the basis of his paintings, in his case by projecting slides onto a canvas and painting over them with such technical mastery as to make the finished work appear photographic. But where other photorealists often rendered a flashily depicted Americana, Mr. Bechtle went for understatement and found unexpected beauty in the everyday.

In 2005, the art critic Peter Schjeldahl of The New Yorker called him “the finest of the first-generation photorealists.”

Mr. Bechtle’s 1974 painting “Alameda Gran Torino,” which depicts a Ford station wagon parked in a sun-bleached suburban driveway, was in Mr. Schjeldahl’s estimation a masterpiece — “a nova of banality.” 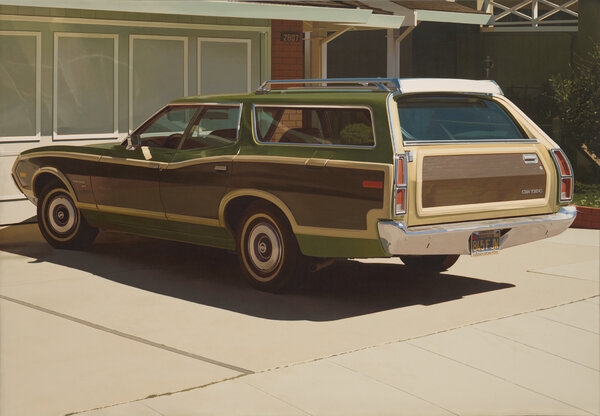 Mr. Bechtle often based his paintings on family snapshots and frequently included cars in them — even though, his son said, he was not a car guy per se.

“It wasn’t that he particularly loved Ford Country Squires,” Max Bechtle said. “He thought they looked cool from a painter’s standpoint. One of the things he always said is the photos he used would have been terrible photos, but they made good paintings.”

Max Bechtle and his younger sister, Anne Higgins, along with their mother, Nancy, star in one of Mr. Bechtle’s most famous paintings, the seven-foot-wide, three-paneled “’61 Pontiac.” Completed in 1969, it shows the artist, his wife and his young children standing in front of the family car, a creamy white station wagon parked on a street of tidy green front lawns.

Mr. Bechtle’s rumpled corduroy pants and short-sleeved button-down shirt couldn’t be more unhip in the hippie era. A family posing awkwardly for a portrait couldn’t be a more ordinary scene. And yet the painting — which the Whitney Museum acquired in 1970, around the time Mr. Bechtle’s career took off — captured something essential about American life.

Janet Bishop, chief curator at the San Francisco Museum of Modern Art, which mounted a retrospective of Mr. Bechtle’s work in 2005, said he chose to paint “those moments that would otherwise disappear into memory.”

She added, “The images were so straightforward and undramatic, it wasn’t immediately clear how brilliant they were.”

Barbara Gladstone, who owns the Gladstone Gallery in Manhattan, was driving in Los Angeles 20 years ago and was inspired to track down Mr. Bechtle and represent him.

“I was stopped at a red light; two people were standing in front of a ranch house beside an old Chevy,” Ms. Gladstone recalled in a phone interview. “I thought, ‘It looks like a tableau vivant of a Bechtle painting.’”

“If one really pays attention and studies carefully, these paintings are incredibly rich,” Ms. Gladstone said. “But they don’t shout. They’re not aggressively looking for attention. That wasn’t him. He was a very measured person. They’re measured paintings.”

Robert Alan Bechtle was born on May 14, 1932, in San Francisco to Otto Bechtle, an electrician, and Thelma (Peterson) Bechtle, a schoolteacher. He was interested in drawing from a very early age, and by the time he graduated from Alameda High School, near Oakland, he knew he wanted to be an artist.

Mr. Bechtle earned a B.F.A. from California College of Arts and Crafts (now California College of the Arts) in Oakland. After a stint in the Army that took him to Europe, where he found inspiration visiting museums, he returned to the school to complete his master’s. He later taught at San Francisco State University for 30 years.

Painters like Wayne Thiebaud and Richard Diebenkorn, who were part of the Bay Area figurative school of the 1950s, were an early inspiration to Mr. Bechtle — largely to his detriment, he said. In his effort to cast off the anxiety of influence and find his own painterly signature, he turned to realism and to a flat neutrality of tone and viewpoint that pervaded everything he did thereafter.

“It was sort of a way of saying, ‘I’m not interested in style. This is a no-style way of painting, I’m just interested in looking,’” Mr. Bechtle said in a profile on the San Francisco public television station KQED. “And it worked.”

His decision to use photographs to guide his brush strokes came about because of the difficulty he had in capturing the foreshortened view of a parked car. By dropping a slide in the projector, he could correct all the lines.

A meticulous, workmanlike painter, Mr. Bechtle took upward of six months to complete one of his large oils. He would do an undercoat with burnt sienna, as the Renaissance painters did, before adding in the colors. He was sensitive to the way light would hit a surface; it could be said that light, and the way it landed on a geometric plane like a curb or car hood, was his true subject.

“One can look at Bob’s paintings as abstract painting,” Whitney Chadwick, an arts historian who became Mr. Bechtle’s second wife in 1982 (his first marriage ended in divorce), said in the KQED profile. “They have a subject, but they just as well can be abstractions. Because they are truly about the language of painting.”

In addition to Ms. Chadwick and his two children, Mr. Bechtle is survived by a brother, Kenneth.

Toward the end of his life, Mr. Bechtle stopped doing the large oils that took so much energy and concentration, and turned to printmaking, watercolors and drawings — mediums in which he had worked with equal mastery throughout his career. His last show, at Gladstone 64, Ms. Gladstone’s uptown space, was in 2018.

Once again, Mr. Bechtle turned to the familiar streets of the Bay Area, to render what Ms. Higgins, his daughter, called “little snapshots.”

“The moments that he captured were just the ordinariness of the human experience,” she said. “But for whatever reason, he saw something in them that other people don’t see.”