Rusty Warren started out in the early 1950s performing harmless fare in bars and clubs in the Boston area and the Catskills.

“Mostly I’d play the piano and I sang a little,” she said. “But every so often I would get a heckler, and I’d talk back to him, and people would start to laugh. And of course I liked that laughter much better than I did some of that applause, so I started to talk more, and to sing and to play less.”

And what talk it was. In the era of “Our Miss Brooks” and “Father Knows Best” on television, Ms. Warren developed a scandalous comedy routine that was full of barely veiled innuendo about sex, outrageous references to breasts and more, much of it delivered in a husky shout.

Ms. Warren died on Tuesday at a friend’s home in Orange County, Calif., Liz Rizzo, who was her partner for many years, said. She was 91.

With that new risqué routine, Ms. Warren began packing larger clubs all over the country. The release in 1960 of her second comedy album, the brazenly titled “Knockers Up!,” only increased her fame.

It was a booming time for live comedy and comedy records — “The Button-Down Mind of Bob Newhart,” Mr. Newhart’s Grammy-winning breakthrough, was released the same year — and Ms. Warren emerged as a star in an out-of-the-mainstream sort of way.

“She was red hot,” Neil Norman, the owner of GNP Crescendo Records, who made a documentary about her, “Rusty Warren: Knockers Up! The Lady Behind the Laughs” (2008), said by phone.

Her humor may seem retro and regressive by today’s standards, but in the late 1950s and early ’60s it resonated with a certain segment of fans who were getting ready to shed the straitjackets of the day, especially women.

“Her demographic was housewives, because she would joke around about sex and marriage and that stuff,” although she herself was gay, Mr. Norman said.

As she once explained, “I like helping inhibited females enjoy themselves.”

She released more than a dozen albums, including “Rusty Warren Bounces Back” (1961), “Banned in Boston” (1963), “Bottoms Up” (1968) and “Sexplosion” (1977), selling hundreds of thousands of copies (“Knockers Up!” was a longtime resident of the Billboard 200 chart) even though for much of her career some retailers wouldn’t display them prominently and she didn’t get the television bookings that more mainstream comics did.

Ms. Warren was born on March 20, 1930, in New York City and adopted as an infant by Herbert and Helen Goldman of Milton, Mass., who gave her the name Ilene Goldman. Her father was in the Navy and was later a railroad worker. Her mother, Ms. Warren said, having been told that her birth family was a musical clan, made sure she took piano lessons as a child. Growing up in Milton, she showed a wisecracking side as well.

“I had this comedy streak in me that was constant since I was a young child,” Ms. Warren told Today’s Arizona Woman in 1983. “I would always open my mouth, and partially my foot was in it.”

After high school, she attended the New England Conservatory of Music, studying classical piano and voice and thinking she might become a teacher. But after graduating in the early 1950s, she started performing in nightclubs and bars. The singer and comedian Sophie Tucker was an influence, and also caught Ms. Warren’s act one day, hearing her cover Ms. Tucker’s song “Life Begins at Forty.” Afterward she gave the young performer some advice.

“She asked me why would I ever do that song when I was 24 years old,” Ms. Warren told the comedy website SheckyMagazine.com. “She also told me to be honest with my audiences as they will know if you’re lying, because audiences are smarter than you think they are.”

She had taken a stage name — “Rusty because of my hair color and Warren because we lived on the corner of Warren Street,” as she would explain in her act. And, at the suggestion of one club owner, she started working song parodies into her repertory. She started telling more and more jokes, and a nightclub act evolved, one that led her to bigger and bigger clubs. In the late 1950s, when she was playing at the Crescendo in West Hollywood, Calif., the club’s owner, Gene Norman — Neil’s father — told her she had to get out from behind the piano because people in the back of the room couldn’t see her.

“I ended up with a pianist behind me,” she said.

During an extended run at the Pomp Room in Phoenix, she recorded her first album, “Songs for Sinners,” released in 1959 on Jubilee Records. She had also begun perfecting the “Knockers Up March,” which, she said, began a few years earlier when, as she was playing a marching rhythm on the piano, a club owner in Dayton, Ohio, urged patrons to get up and parade.

“I told the women to march with their boobs held high,” she told The Las Vegas Sun in 1978, “knockers up, so to speak, and a new phrase was born.”

The bit became so popular that Jerry Blaine, the owner of Jubilee, decided to flaunt it by naming her second album after the phrase.

“And they said: ‘You wouldn’t dare. How are you going to sell it? Where are you going to put it? No one is going to take it,’” she told Kliph Nesteroff, a scholar of comedy, in a 2010 interview. “Jerry says, ‘Watch me.’”

Like that album title, Ms. Warren’s patter was full of suggestiveness that was racy for the time. “If you’re interested in living the rest of your life with him, don’t give it to him now,” she admonished women in her audiences who were dating or engaged. “Give it to his friends and let them tell him how good you are!”

Her material may have been saucy, but she always maintained that she was less bawdy than the handful of other brash female comics of the era, like Belle Barth and Pearl Williams. (“I was the tame one of all of us,” she said.) She didn’t use four-letter words or go in for jokes about things like bondage; she said conventional courtships and marriages provided plenty to laugh about.

“Two fellas meet each other in the street one day,” went one gag that always drew a sustained laugh. “One fella said to the other, ‘Hello there, George, how’s your wife?’ He said, ‘Better than nothing.’” 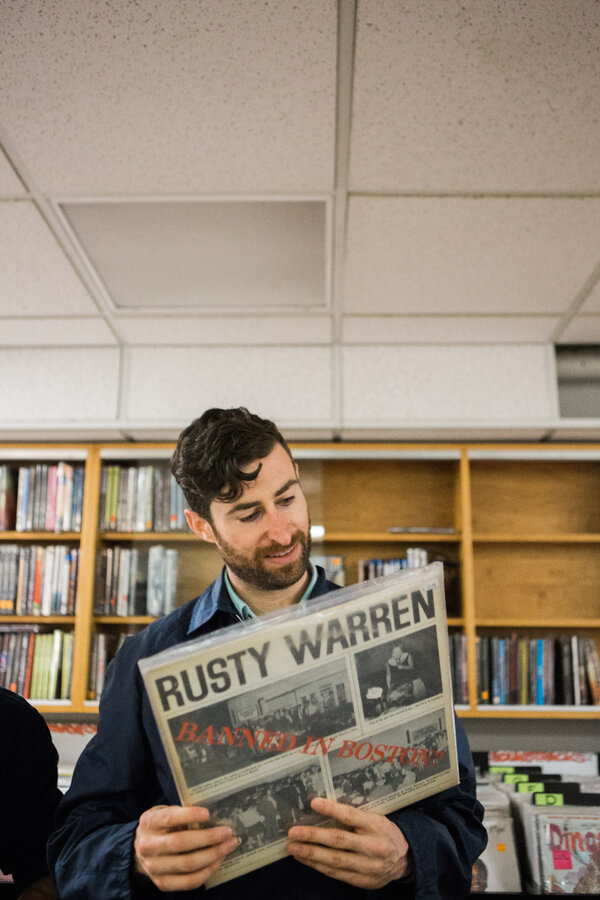 In the days before social media, Ms. Warren, who continued to perform into the 1980s, helped sell her shows and her albums by maintaining an extensive mailing list and using gimmicks like the Knockers Up Club. And fans helped spread the word.

“You’d enjoy my album in the backyard with the barbecue,” she said. “You wouldn’t sit there with earphones. That’s what I was selling: a sharing of laughter.”

She leaves no immediate survivors, said Ms. Rizzo, who in 2016 published “Rusty Warren: The Knockers Up Gal,” a biography augmented with a wealth of memorabilia from Ms. Warren’s life.

Late in her career, Ms. Warren would sometimes have an odd experience: Longtime fans would bring their grown children backstage to meet her.

“They would introduce me to the children they had hid my records from,” she told The Sun. “Sometimes the children will tell me about playing my records, and that their parents hadn’t hidden the records well enough.”