LONDON — Even if Britain had lifted its Covid-19 international travel ban in time, Sarah Ball would still not have been able to accompany her work to Frieze New York this week.

That’s because in February the British painter — who is also an avid horticulturalist — took a serious tumble while tending to her vegetable garden at home in coastal Cornwall. She broke her ankle so badly that she had to have surgery and was getting around with a wheelchair as she recuperated. For a time she was barely able to make it into her studio, let alone fly across the Atlantic to attend her first solo exhibition at a major art fair.

“I had just managed to finish the work before I broke my ankle, which was amazing timing,” Ms. Ball, 56, said with a soft chuckle during a video interview, adding that she got some help varnishing the works before her surgery. “To be having a solo booth is terrifically exciting; I just wish I could go.” 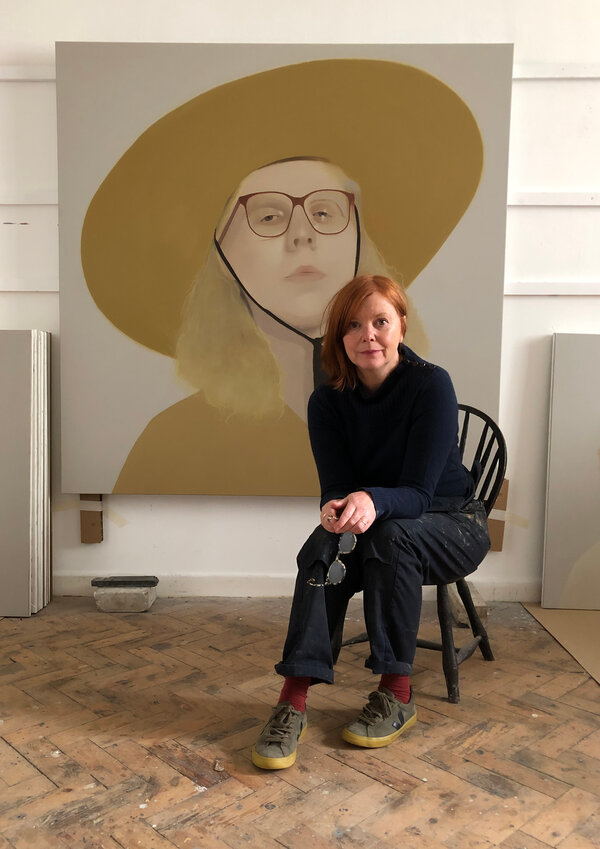 But it’s a fairly safe bet that this will not be her last opportunity for accolades at an art fair. Though Ms. Ball has been an artist her entire life, international recognition for her intimate and intense portraits has come relatively recently. That’s in part thanks to signing last year with the Stephen Friedman Gallery, which represents prominent artists like Yinka Shonibare, Kehinde Wiley and Lisa Brice.

At Frieze, the gallery will display about a half-dozen works from her ongoing series of portraits that play with themes like sexuality and identity, something she said was partly influenced by growing up during a time when musicians like David Bowie, Chrissie Hynde and Poly Styrene were experimenting with gender self-expression.

Born in Yorkshire, Ms. Ball always wanted to be a painter. But when she was in art school in the 1980s, much of the focus was on the conceptual side of contemporary art. “I was making very figurative paintings, which was very not what was happening in the art world then,” she said.

It was suggested that instead she move more into illustrations and graphics. So for almost a decade she was an illustrator, doing projects for the National Theater as well as a number of book covers. “But,” she said, “I always knew that wasn’t what I wanted to do.”

After having two children — a son and daughter, now both in their 20s — she decided to complete an M.F.A. at Bath Spa University in 2005 and go back full time to painting. “Having children made me realize that I really wanted to pursue my own work,” she said. “This happens in life as you mature; you just question things.”

Her art hints at many inspirations: the stillness of Vermeer, 17th- and 18th-century Flemish artists, and contemporary painters like Lucian Freud and David Hockney.

Ms. Ball said that filmmakers like Terrence Malick and Roy Andersson also motivated her work. “These little vignettes that give you a little bit of information,” she said, “but then invite you to fill in the rest, they sort of ask a lot of the audience.”

That is something many of her admirers say they are drawn to in her works. Michael Taylor, co-founder of the London print gallery Paupers Press, said that the first time he came across her smaller print portraits, he was struck by their surreal and timeless beauty. “You felt there was some narrative behind these faces,” he said, recalling how visitors came to view Ms. Ball’s works at a print fair in New York a few years ago.

“There was something historical, social, political, whatever that belied their simplicity,” he said. “And I found that a very powerful combination.”

Ms. Ball works from photographs — ones she has found on social media, for example — and does not aim to create a “true and utter” likeness. After asking permission, she sometimes exchanges messages with the subject, but she chooses not to meet them. “The idea of having a conversation while I’m working is not for me,” she said.

In 2015, a Cornwall gallery exhibited her portraits of immigrants who passed through Ellis Island in New York Harbor to enter the United States. The word “immigrants,” she wrote, “is weapon, a political pawn, a tabloid headline, to the point that one might forget that we are dealing with human beings.”

Ms. Ball’s works have been exhibited in shows at the Royal Academy of Arts and the Victoria & Albert Museum, both in London, and are part of the permanent collections of the British Museum and Norway’s Kistefos Museum.

“We’ve been inundated with all kinds of requests to see images of the new work, and I am really excited for her,” Mr. Friedman said. “There is a great buzz.”

Owners of her work are also enthusiastic. Beth Rudin DeWoody, a New York-based collector who is on the boards of the Whitney Museum of American Art in New York and the Hammer Museum in Los Angeles, owns six of her paintings.

“When I bought the first work, I had no idea what was going to happen with her career, but I knew she was really talented,” she said, adding that she had a few from the “Immigrants” series. “There’s just something so compelling about them.”