Most late-night hosts took the week of Presidents’ Day off, but Trevor Noah and Jimmy Kimmel were on Tuesday night with a rare weather report.

“If you’re watching us from home right now, the good news is you have power.” — JIMMY KIMMEL

“Oh, hell no! Trucks spinning around? Cars flying off the road? This storm has turned Texas into that ice level from Mario Kart. If I was in Texas right now, I’m carrying around a green shell with me, just to be safe.” — TREVOR NOAH

“And you got to understand, this is especially tough for Texans because they’re not equipped for snow. They don’t have snow shovels out there. Their best bet is to grab their AR-15s and shoot each snowflake before it lands: ‘Go back to Canada where you belong!’” — TREVOR NOAH

“Now it turns out there are a lot of reasons Texas has suffered such a huge power outage. Supply for electricity is down, the demand is surging. But experts also say that Texas neglected and underinvested in its grid until it finally broke during the storm. And look guys, I get it: Spending money on infrastructure is probably the least sexy thing you can do with your tax dollars, but it’s one of those things you’re going to take for granted until you’re in an emergency. It’s the same way how the people who built the Titanic didn’t focus on lifeboats. Instead, they were too focused on getting cars for their passengers to bang in.” — TREVOR NOAH

“This morning was the coldest in decades in Dallas, Houston, San Antonio and Little Rock. In New Orleans, they had the coldest Fat Tuesday in more than a hundred years. People on the streets were putting their tops on.” — JIMMY KIMMEL

“And I think this is the right move. I mean, the sooner the people of New Orleans can stop the spread of Covid, the sooner they can get back to spreading gonorrhea.” — TREVOR NOAH

“And, yeah, it’s sad. But it’s just not safe to hold a Mardi Gras parade. I mean, during a pandemic, a tuba just turns into a Covid fire hose.” — TREVOR NOAH

“I thought we were supposed to have fun in ’21. But I guess that hasn’t started yet.” — JIMMY KIMMEL

Patton Oswalt will pop by Wednesday’s “A Little Late With Lilly Singh.” 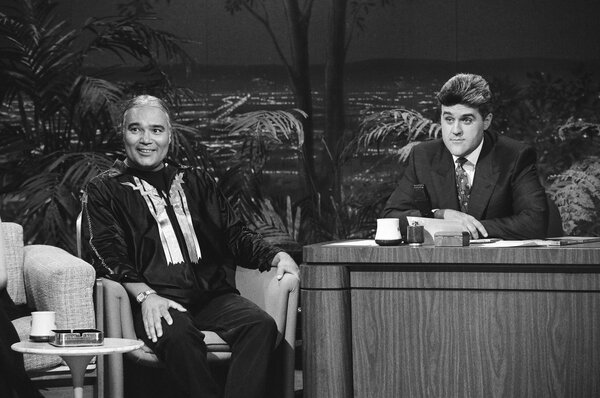 In his new book, Kliph Nesteroff, a historian of stand-up comedy, details the oft-forgotten and overlooked contributions Native Americans have made to the genre.