“The Trump train has a lot of empty seats,” Jimmy Kimmel joked.

Stephen Colbert echoed his sentiments, saying that with the Electoral College result, “some Republicans have been forced to face their biggest fear: reality.”

“McConnell said, ‘As of this morning, our country officially has a president-elect,’ as if we hadn’t had one for the 40 more days before that.” — JIMMY KIMMEL

“And you know Trump’s luck has run out now that Mitch McConnell has conceded the election, because forget Putin — if Mitch can’t find a way to subvert American democracy, then it just can’t be done.” — TREVOR NOAH

“Wow, no hurry, Mitch. What else did you formally recognize, Alaskan statehood?” — SETH MEYERS

Bill Barr’s resignation as attorney general was also big news on the late-night shows, and Seth Meyers was a tad verklempt.

“Attorney General Bill Barr resigned yesterday, and I didn’t expect this, but I’m a little — I’m a little emotional about it. No, wait, nope. That was tear gas.” — SETH MEYERS

“President Trump tweeted yesterday, ‘Just had a very nice meeting with Attorney General Bill Barr at the White House. Our relationship has been a very good one. He has done an outstanding job,’ which Twitter immediately flagged.” — SETH MEYERS

“Bill Barr has resigned as attorney general, as opposed to before, when Barr was simply resigned to his fate of defending every stupid thing that Donald Trump has ever said.” — JAMES CORDEN

“Seriously, Barr is quitting now? That’s like waiting until the last five minutes of ‘The Emoji Movie’ to walk out of the theater.” — JIMMY FALLON

“That’s right, Barr is leaving before Christmas to spend holidays with his family. Americans heard and were like, ‘Yeah, we all do that, but then we come back to work.’” — JIMMY FALLON

“Yes, Bill Barr has officially resigned, which surprised some people because for a long time, it seemed like he was ride or die with Trump. He whitewashed the Mueller Report, he protected Trump’s cronies, he even reportedly ordered peaceful protesters to be tear-gassed just so that Trump could walk over to a church and wave a Bible next to it. And when the White House chef prepared brussels sprouts, Barr would hide under the table so Trump could feed them to him.” — TREVOR NOAH

“But Trump also wanted Barr to overturn the election results, and Barr wouldn’t do that. So one of two things has happened here: Either Barr quit because Trump became too bat[expletive] crazy even for him, or Trump fired Barr because he’s not bat[expletive] crazy enough to roll in this White House. Either way, this works out the best for Barr, because everyone is heading out on January 20, so this way, at least Bill Barr’s beating the traffic.” — TREVOR NOAH

“This must have been a punch in the McRib. Joe Biden got a congratulatory message from Trump’s KGBFF. Sugar Vladi Putin put out a statement acknowledging Biden’s victory. He said, ‘For my part I’m ready for cooperation and contacts with you,’ which will be easy because Russia just hacked all of our contacts.” — JIMMY KIMMEL

“But wait, if Putin’s offering a congratulatory handshake to Joe Biden, then what is Trump eating pellets out of?” — JIMMY KIMMEL

“And, hey, even Vladimir Putin knows it’s over. And if someone who has had that much Botox can accept reality, you can, too.” — SETH MEYERS

“‘I am ready for interaction and contacts with you.’ That’s actually what Mike Pence said on his honeymoon.” — JIMMY FALLON

“Seriously, guys, what a weird phrase: ‘I am ready for interaction and contacts with you.’ Sounds like Mike Pence getting frisky.” — TREVOR NOAH

“Not a great look for Senate Republicans when the guy who interfered in our election is like [imitating Putin]: ‘Come on, he won. At a certain point, you guys are poisoning democracy, and not in the right way — with poison.’” — STEPHEN COLBERT

“Even Putin recognized Biden’s win. That’s a tough break for Trump. In just a few days, his Supreme Court and his supreme leader went against him.” — JIMMY FALLON

“I think Putin is relieved Trump is out. All day long he’s been singing, ‘Since you’ve been gone, I can breathe for the first time.’” — JIMMY FALLON

“As if the news wasn’t bad enough for Trump, moments later, Rudy Giuliani popped into the Oval Office like, ‘Don’t worry boss, you still got me.’” — JIMMY FALLON

Tom Hanks will check in with Stephen Colbert on Wednesday’s “Late Show.” 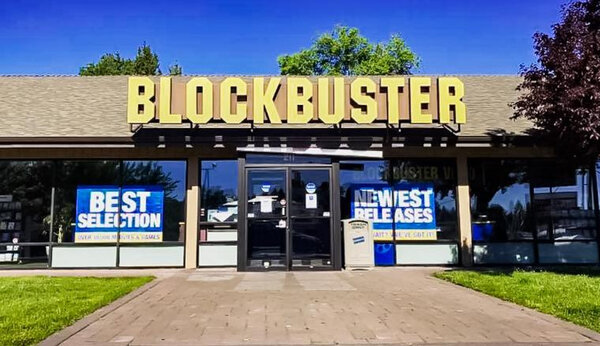 The new documentary “The Last Blockbuster” reflects on the legacy of the home video chain and the industry as a whole.