When they filed into their assembly hall on Tuesday, students at Sacred Heart High School in Newcastle weren’t expecting to find a pioneering 17th Century Italian painter waiting for them.

It was, in fact, a self-portrait by a painter called Artemisia Gentileschi, the greatest female artist of her age, on loan from the National Gallery in London.

It was accompanied by two security guards – hardly surprising, given its £3.6m price tag.

“It was quite surprising to be honest,” says Precious, who’s in Year 12. “Because you wouldn’t think they’d bring an actual painting into a school, of all places.”

Precious and her friends at the girls’ school will be getting to know Artemisia well this week.

She was the first female member of Florence’s Academy of the Arts of Drawing and ran her own studio, counting King Philip IV of Spain, the Medici family and the Grand Duke of Tuscany among her patrons.

But she had to overcome great personal trauma. At the age of 17, she was raped by a fellow painter. During the infamous seven-month trial that ensued, Artemisia was tortured to see if she would admit to lying. 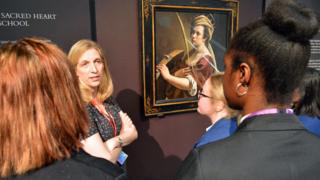 Her artistic achievements were forgotten after her death, but she has been rediscovered in recent decades, and become something of a feminist role model.

The National Gallery bought the self-portrait last year – with BBC arts editor Will Gompertz giving it a five-star review – and it’s now on a UK tour.

But instead of going on show in galleries, it has been hung in more unconventional venues like the Glasgow Women’s Library, a GP surgery, and now this school.

In the weeks before its arrival, the Sacred Heart pupils learned about the masterpiece in art lessons without knowing it would be unveiled during assembly.

“When students research paintings, you can’t get a sense of the colour, the texture and the scale,” says Laura Stocks, the school’s head of art and textiles.

“And that impact is much more powerful when you’re stood in front of the painting. I think it’s a really powerful image. She looks out at you and her eyes follow you across the room.”

Artemisia Gentileschi, with one hand resting on a broken, spiked wheel, depicted herself as the Christian martyr St Catherine, another woman who had endured torture at the hands of men.

“She’s presenting herself as Catherine, as a painter who has made it, who’s become incredibly successful,” says the National Gallery’s deputy director Susan Foister.

“Yet we know from her well-documented life that she overcame extraordinary difficulties.

“To become a top painter in the 17th Century, for a woman, was not going to be easy, ever. But Artemisia had particular challenges. So to bring her portrait to a girls’ school we hope is going to provide some inspiration.”

More about this painting

“Initially I thought it was going to be all about the painting and looking at the painting,” she says. “But the more I’ve found out about the artist, the more I think it resonates with us being a girls’ school.

“Artemisia provides an amazing a role model because she had such a hard life and struggled so much but she kept going and eventually became the artist she wanted to be.”

There are special lessons and other events at the school this week in honour of their special guest.

Precious says: “I think the statement they’re trying to make is that art can be for anyone.”

She adds: “It kind of shows you can strive for what you want, and her story shows that if you’re motivated and driven to get to some place, you can get there, and it doesn’t matter what’s in your way.”

Next year, the self-portrait will be the centrepiece of the UK’s first exhibition of the artist’s work at the National Gallery. But before that, the institution wanted to prove that its reach extends beyond its Trafalgar Square home.

If you happened to visit the doctor in Pocklington, East Yorkshire, last week, you might have seen Artemisia there too. The town’s GP surgery was the previous stop on the painting’s tour, hanging in a corridor on the way to the treatment rooms. (The waiting room didn’t have the right temperature and light conditions for it to hang there.)

While the school visit is intended to inspire girls and young women, the GP trip was set up through a charity called Paintings In Hospitals, which advocates the therapeutic benefits of art in medical settings.

“Personally I’m a lover of art and I do visit art galleries but I was totally surprised by the effect she’s had on everybody.

“Also, knowing the story and the background also gives people the strength and confidence that they can also overcome any challenges that they’re going through in their life.”

The next stops on Artemisia’s nationwide expedition are under wraps, although we know one will be in Waltham Forest in north-east London as part of its London Borough of Culture events.

The tour is not about reaching huge numbers of people, according to Letizia Treves, the institution’s curator of later Italian and Spanish paintings.

“Even if 50 people see it but you’ve changed those 50 peoples’ lives somehow… it’s about reaching people who don’t normally walk into a gallery and who have never really experienced art, or have never really had the opportunity to, or haven’t stopped long enough to look.”

Tags: £3.6m, hanging, masterpiece, THE
Recent Posts
We and our partners use cookies on this site to improve our service, perform analytics, personalize advertising, measure advertising performance, and remember website preferences.Ok