“What do you prefer?” Trump asked a mostly black audience at a campaign event. “’Blacks for Trump’ or ‘African Americans for Trump’?” 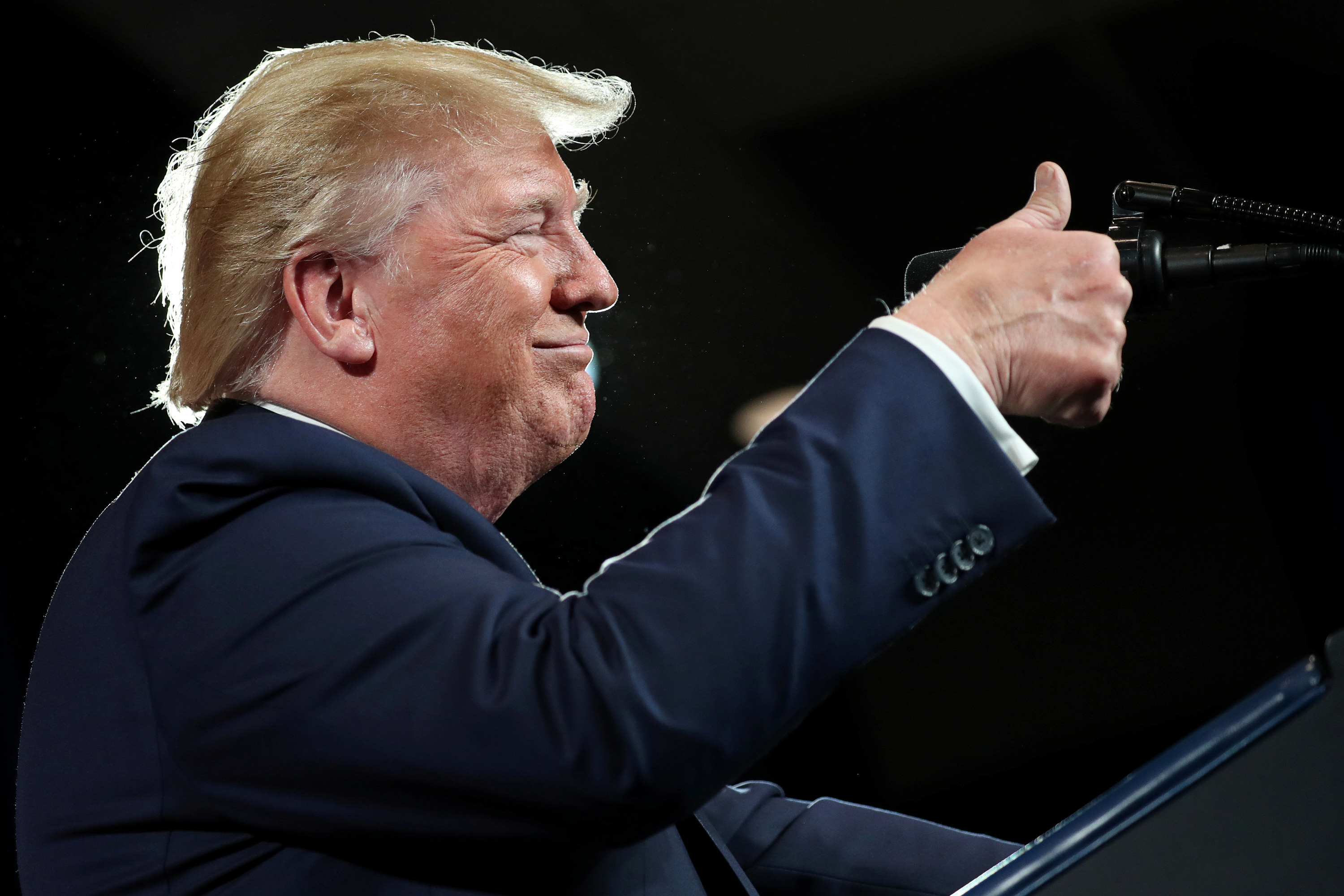 ATLANTA — President Donald Trump brought some of his best-known black supporters to Atlanta to launch the “Black Voices for Trump Coalition” on Friday, lavishing praise on his allies and decrying the Democratic Party as corrupt and disloyal to black voters at a rally in a midsize ballroom.

But first he had a question.

“What do you prefer?” Trump, asked a mostly-black audience here in the shadow of the cavernous Mercedes-Benz Stadium. “’Blacks for Trump’ or ‘African Americans for Trump’?”

“Blaaaaaaaaaacks!” someone screeched at Trump. “’African Americans for Trump’ — that don’t roll off the tongue” how Trump likes, one observer remarked. Then a “blacks for Trump” chant broke out.

With that, the president launched into a long plea for his black supporters to bring more black votes to his reelection campaign, particularly building an appeal to black men.

“The Democratic Party left you,” he said. “Today we say: Welcome to the Republican Party.”

Supporters interpreted Trump’s speech — and those from his allies that preceded it — as a challenge to attract black men based on the president’s record on jobs, criminal justice, and what some of his strongest black supporters say is years of neglect and failed policies from the Democratic Party.

“The message that is being spewed on the Democratic side is primarily focused on the female vote,” said Janelle King, an entrepreneur who was invited to speak by Trump. “They know that a majority of the votes come from black women, so they isolate the black men, and they’ve been that way for a number of years. I’m all for black girl magic and women’s empowerment, but we can’t say that and then completely remove black men. It’s time for the whole family to be [active].”

But despite the evidence, Trump’s black supporters insisted Friday that things are changing.

“People are waking up and realizing that the Democratic Party hasn’t done anything for us, and at the very least we need to make them feel nervous,” Joel Patrick, a 23-year-old from Ohio who came to Georgia to see Trump, told BuzzFeed News. “If we’re going to keep voting for them they need to be doing something worth voting for, but right now it seems like the only thing they stand for is opposing the president.”

Patrick, who said he “posts on the Internet” about being a black Trump influencer, said “Everyone that’s here really believes in Trump and they’re trying to influence the [political] culture that they directly affect.”

To Democrats, Georgia represents a purple frontier that can only turn blue if more black men are engaged. And it’s a difficult proposition that Trump seems determined to test.

“To win in places like North Carolina, Florida, Pennsylvania, and Michigan, a part of that includes suppressing the black vote and getting a marginal share of black men,” Jarrod Loadholt, a Democratic strategist based in Georgia said of Republican strategy, adding that the idea of the Trump campaign adding black men effectively wasn’t entirely ridiculous.

Trump in his speech insisted that Democrats have taken black voters for granted “for decades.” He cited the “worst” schools, how Democrats in power shipped jobs overseas, kept open borders, and then sponsored tough-on-crime bills that ruined lives.

“When I ran for office three years ago I looked at the bleak, dismal record of the Democrat party and asked the African American community. What the hell do you have to lose,” Trump, who was not his usual ebullient self, said with the same trademark exuberance he had in 2016.

Jacob Battle Sr., 74, said he drove two-and-a-half hours from Leslie, Georgia, to see Trump because he was convinced that more was riding on the election than just Trump’s ability to continue on as president.

Trump, he wanted to warn black men, is not the enemy just because he’s white.

“As long as we keep our kids incarcerated in ignorance and mass stupidity they will always be enslaved,” he said.

Speaking first Friday, campaign adviser Katrina Pierson touted what she said was Trump’s loyal support of the black community, from his actions to support Historically Black Colleges and Universities, to steps to advance fairness in the criminal justice system, and, armed with religious freedom, people are finally allowed to “speak in favor of and serve our Lord.”

Then Pierson’s speech took on a foreboding political tone. What had Democrats done or offered to do that really helped? In communities there was little opportunity and a lack of hope but “no shortage of liquor stores.” With the Democrats, black folks had grown accustomed to “failure as a lifestyle,” she said. Democrats, she said, had placed the lives of “illegal aliens over our own just because they look like us.”

Harry Jackson, a black Republican Trump supporter from Beltsville, Maryland, said that Democrats stopped currying favor with black men when candidates would come to churches the Sunday before Election Day year after year but never deliver on badly needed fixes to the criminal justice system.

“It was Bill Clinton who came up with three strikes,” said Jackson. He said he thinks the Trump campaign could move the needle with black men if surrogates are given an opportunity to tell their version of who they believe Trump is — many black men ‘’do hate him because they don’t know him,” Jackson said. And he thinks it’s time they give Trump a chance.

“These kids are going in at 19 or 20 and coming out 40. What’s that all about? That’s ruining the kids life,” Jackson said of the criminal justice system. “That to me is the Democrats’ legacy with black men. They don’t care about us, they aren’t giving opportunities and they just want power.”