Exploring a home that isn’t your own carries a voyeuristic thrill, a feeling that you’re intruding on a private space. This excitement holds even if you have paid for your admission, even if no one has lived there for decades. A rare upside of the pandemic — at least until people discovered decent virtual backgrounds — was the opportunity to peer into (and immediately judge) colleagues’ rooms.

Back when interior spaces weren’t so perilous, I was a fiend for a historic home tour. Summer palaces, period rooms at the Met, living history installations with basket-weaving how-tos — yes, absolutely, all of them. Last summer, during the pandemic’s darker days, I spent some happy hours “visiting” Newport’s cottages online.

“A House Tour,” directed by Jason Eagan, began in 2016 in San Francisco as an in-person event, which took an audience from room to creatively rendered room. It has been re-envisioned as an audio-only drama, accompanied by a deluxe mailer. (Mailers are another pandemic upside; sometimes they include wine.) This one contains two figurines that you are invited to decorate with feathers and pipe cleaners — I dragooned my children for this part — and a number of cunning packages. 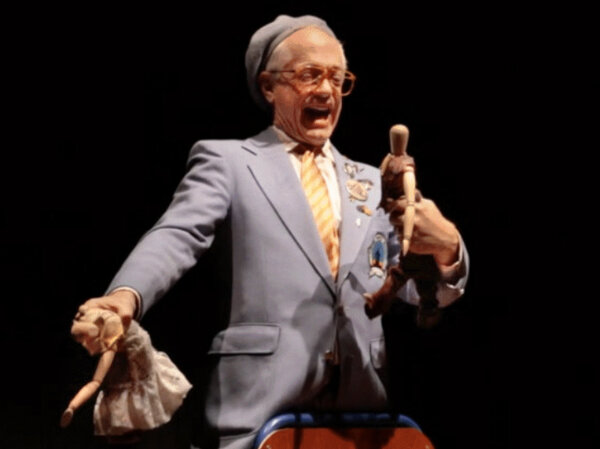 The Broadway actress Lilli Cooper provides the introduction, a flawless parody of a museum audio guide. Her voice informs us that the Porter Family Mansion has doors, windows, rooms and “some of the finest world collections of many different things.” (The house is wholly imaginary.) Danny Scheie’s Weston takes over. Scheie was also the star of the in-person version, and his Weston has a strange and malevolent energy. He delights in sharing the most scandalous details of the lives and sweaty loves of Hubert and Clarissa Porter, the fictional one-percenters who built the mansion.

The monologue leans heavily on innuendo and smutty puns. This salaciousness extends to the participatory elements, as when Weston tells us to fold up a card and put it in our “undies.” Let’s just say that even an obedient audience member — I had, as directed, mashed the figurines together in a simulation of sex — has her limits. (The children, thankfully, had already gone to bed.)

More frustrating than the lewdness is how incompletely the creators have reimagined this experience for at-home consumption. The house never really comes into mind’s eye view and the items in the box, almost entirely irrelevant, don’t help. Also, the audio runs nearly two hours, which is an awfully long time to sit at your computer, headphones in, staring at concupiscent dolls. And the humor is beyond juvenile. I had hoped that “A House Tour” would create a kind of memory palace, a mansion of the mind, but it just loiters, endlessly, in the gutters.

“Someone Else’s House,” produced by Geffen Playhouse in Los Angeles, is an altogether shorter, tauter and shrewder work. Developed for an online audience and running just under an hour, it’s a chiseled piece of at-home horror, ostensibly based on a colonial-era New Hampshire house that Mezzocchi’s parents and siblings once inhabited. “This isn’t just a ghost story.” Mezzocchi says. “It’s real. It happened to my family.”

“Someone Else’s House” also has an accompanying box. This one contains items relating to the house’s history, like a family tree and antique sketches and photographs. It also includes a candle, scented for some reason like decomposing vanilla.

Mezzocchi, in flannel shirt, wool beanie and quarantine beard, makes an appealing narrator. The story he tells, from a location that becomes clear as the tale proceeds, is an extremely creepy one. (The short version: Maybe don’t buy a house with a former slaughtering cellar in the basement?) The design is meticulous, the archival photos unsettling, the “are they or aren’t they?” Zoom glitches unnerving. And if you have ever suspected that your furniture is out to get you, this is the digital work for you.

What’s strange, though, is how Mezzocchi doesn’t fully trust the theatrical form. If you have seen his previous work, like “Russian Troll Farm: A Workplace Comedy,” you know that he’s an absolute wizard at making online theater feel live. “Someone Else’s House” ends in a frightening digital coup-de-theatre, but none of the multimedia effects are more uncanny than the low-tech vision of Mezzocchi sitting in front of his laptop, spinning a tale in a slowly darkening room.

And yet, the scariest online house tour may be the brief one offered by the experimental English theater Blast Theory, which has produced a virtual version of its 2018 work, “A Cluster of 17 Cases.” Created when Blast Theory were artists in residence at the World Health Organization, the piece explores the transmission of the SARS virus to 17 people on the 9th floor of Hong Kong’s Metropole Hotel. The company has built a scale model of the hotel, in lightweight aluminum. An interactive site allows you to take the elevator up and explore it.

“Some people will leave unscathed, and some people will die. It’s time to choose your room,” a narrator says, coolly. There are only three rooms to discover, plus trips back down to the lobby to learn how many other people the rooms’ occupants infected once they left the hotel and flew home. (As Covid-19 has taught us, aerosolized particles are no joke.) The nerve-shredding experience lasts perhaps 15 minutes. Like “At Home” and “Someone Else’s House,” it’s ultimately a cautionary tale. For more than a year most of us have been told to stay indoors, but as these shows argue, inside isn’t so safe either.

A Cluster of 17 Cases