Mark Kanemura, photographed in Laurel Canyon in Los Angeles. He said his videos mix things he loves: “Obviously dance, but also theater and drag and costuming.”Credit…Daniel Jack Lyons for The New York Times

Need a hit of serotonin right about now?

The dancer Mark Kanemura’s lip-sync videos aim straight for our neglected pleasure receptors. In these rainbow-hued, dollar-store fantasias, Mr. Kanemura accents pop beats with runway struts and hair whips. He can swirl a pride flag with a matador’s panache. A gown, jury-rigged from black tarp, might conceal large quantities of balloons. When he removes one wig it tends to reveal another (and another, and another).

Though his videos feature canny pairings of movement and music — he favors Carly Rae Jepsen’s fizzy singles — Mr. Kanemura doesn’t call them dance, exactly. “They’re a mishmash of all these different things I love,” he said in a video interview. “Obviously dance, but also theater and drag and costuming.”

Addictive and meme-worthy, they seem made for TikTok, where Mr. Kanemura (@markkanemura) has amassed more than 175,000 followers. But he didn’t start out making them for TikTok.

In 2017, when he uploaded the first in his series, Mr. Kanemura’s posts lived on Instagram, where dance and dancers have thrived. (His handle there is @mkik808.) The lip-sync clips played to an audience that might already have been familiar with his dance talent, thanks to his appearances on “So You Think You Can Dance” and his years spent performing with Lady Gaga. But these videos offered something different: a peek into his creative mind. Soon, they earned the devotion of a large Instagram community.

Now Mr. Kanemura, 37, is building an audience on TikTok, as are many professional dancers who find themselves with more free time than usual. In his case, however, it seems less like an experiment and more like a homecoming. He was creating TikTok content before TikTok arrived.

Mr. Kanemura is far from the biggest star on the app. But what’s appealing about his work is also what makes TikTok appealing in this particular moment. Both offer escapism, on a scale that feels appropriate to a society stuck at home. (Like many TikTok creators, Mr. Kanemura sets most of his videos in the bedroom, that pandemic prison and refuge.) And both highlight refreshing originality, rather than exhausting perfection. 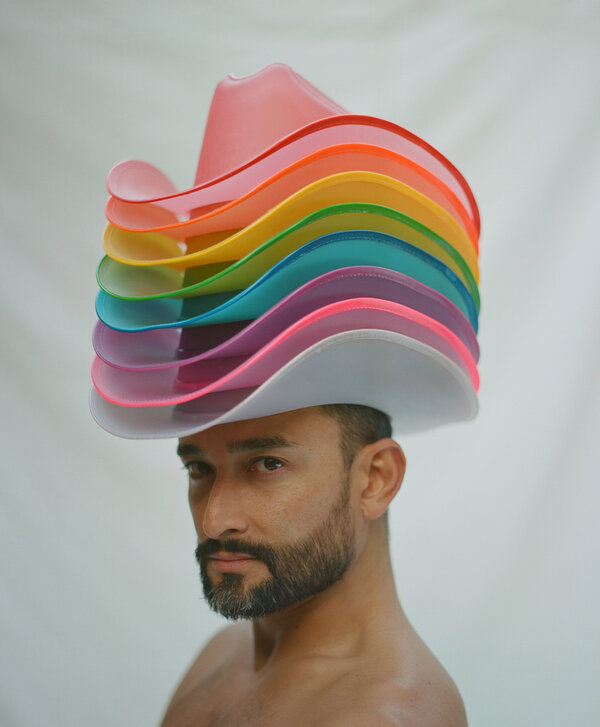 To go viral on TikTok, “you have to hit a cultural mood,” said Shauna Pomerantz, an associate professor at Brock University in Ontario who is studying TikTok creativity. “And I think right now TikTok is viral as a platform because of this state we’re all in.”

Many of Mr. Kanemura’s fans are children, who seem to relate to his playfulness. (My 4-year-old, an ardent admirer, calls him “the rainbow man.”) Perhaps that’s because Mr. Kanemura’s videos are versions of the living-room shows he would put on as a music video- and theater-obsessed child growing up in Oahu, Hawaii.

“I was the kid who would save money not for toys, but for props,” Mr. Kanemura said. “Touring shows would come down to Hawaii, ‘Phantom of the Opera’ and ‘Cats,’ and I would go home and try to recreate them, using the resources that I had — cardboard boxes or sheets.”

The scale was small, but these were prodigious productions. “He taught me what it is to be ‘extra,’” as in over-the-top, said Marissa Kanemura-Morin, his younger sister and childhood collaborator. “He’d use cardboard to make a ‘Phantom’ chandelier, and somehow, everyone believed it.”

In high school, Mr. Kanemura began training intensively in dance. He also started sneaking into clubs to see drag shows. “I was anxious to get into the gay scene,” said Mr. Kanemura, adding that he admired the drag queens’ resourcefulness and brash theatricality. “They didn’t have a ton of money to spend on costumes or looks, so they were constructing it all themselves,” he said. “I realized that drag is theater, and theater is drag.”

After early dance jobs on cruise ships and at Tokyo Disney, Mr. Kanemura earned a spot on the fourth season of “So You Think You Can Dance,” in 2008. In its early seasons, the show was casually homophobic; the executive producer and judge Nigel Lythgoe wanted the men to dance like “dudes.” Mr. Kanemura didn’t fit that role, but he became a fan favorite anyway, progressing to the final six. The choreographer Sonya Tayeh showcased him in her routine “The Garden,” which still makes best-of lists from the series.

The show introduced Mr. Kanemura to the work of Lady Gaga, who made one of her first television appearances during a Season 4 episode. In her work, Mr. Kanemura said, he recognized all of his favorite things — theater, drag, fantasy — and a model for artistic freedom. “I saw her being this wonderful, beautiful, creative creature in the world, and it gave me the courage to be myself,” he said. Lady Gaga hired Mr. Kanemura for her 2009 MTV Video Music Awards performance, and soon he was a fixture on her tours and in her music videos.

Even the dreamiest dance job can turn into a grind. After four and a half years of near-constant travel with Lady Gaga, Mr. Kanemura was exhausted, injured and ready to try something else. What, he wasn’t sure.

He did some choreography (including a routine for “So You Think You Can Dance” set to RuPaul’s “Call Me Mother,” which the website Decider called “a triumph of the show’s evolved queerness”), taught for dance conventions, and experimented with short films. “It was a bit terrifying,” he said. “You feel like you’re starting from zero, which was essentially what I had to do.”

It was at a low point — after a difficult breakup, he was crashing at a friend’s apartment — that Mr. Kanemura made his first lip-sync video, to Ms. Jepsen’s “Cut to the Feeling.” His props were a blond wig, a rainbow flag and a few handfuls of rose petals. It was tame by his current standards, but the video’s exuberance caught the internet’s attention.

“It was bringing me joy, and then the feedback I was getting was that it was bringing joy to a lot of people,” he said. It also felt “liberating and fun and free,” he added, true to himself in a way that his previous social posts had not been. A Pride month version of the video earned Ms. Jepsen’s approval; she invited Mr. Kanemura to recreate the clip live during her 2018 performance at the Outside Lands festival.

So began Mr. Kanemura’s third act as an Instagram and, now, TikTok influencer. A prominent face of the gay community, he uses the power of his internet celebrity to promote self-acceptance. Bullied as a middle-schooler (and again more recently as his social following grew), he has hosted online fund-raisers for the Trevor Project, which supports lesbian, gay, bisexual, transgender and queer youth in crisis.

Last year, Todrick Hall — the “American Idol” standout turned YouTube and TikTok star — featured Mr. Kanemura in the music video for his “Wig,” which Mr. Hall wrote as an L.G.B.T.Q. anthem. “He has a beard and he’s wearing a wig and you can’t really define who he is or what he is and you don’t feel the need to try, because it just makes you happy,” Mr. Hall said.

But Mr. Kanemura’s buoyant parties were, in the spirit of his signature videos, more likely to involve disco balls and pink fruit-printed onesies. They attracted thousands of participants, including the supermodel Heidi Klum. Mr. Kanemura cheered all of them on.

Maintaining a relentlessly positive persona, especially during periods of national and global emergency, can be difficult. Mr. Kanemura doesn’t hide his feelings of depression and burnout from his followers. “I always want to make sure that I’m really showing up for people, in the sense of being a source of light,” he said, “and sometimes I’m just not in that head space for weeks or even months.”

In May, after the killing of George Floyd, he stopped hosting his dance parties. His social feeds went quiet, save for the posting of Black Lives Matter resources. “It was clear that my energy and time needed to be spent elsewhere,” he said. He left his apartment and joined demonstrations in Los Angeles. In that moment, he said, physical communing felt urgently necessary. But as coronavirus caseloads escalated in July, so did the need for virtual community. Later in the summer, Mr. Kanemura re-emerged online — in a pair of roller skates — and his videos began to connect with a TikTok audience.

Though quick to express gratitude for his web-based career, which has allowed him to earn income (via sponsored posts) safely during shutdowns, Mr. Kanemura has goals that extend beyond the screen. Once the world reopens, he said he wants to recreate his quarantine dance parties in the flesh, with a live D.J.

“I would love to make a safe space for people that are not necessarily dancers to come together, dance and express themselves in a way that’s not what you would find in a traditional dance class,” he said.

Until then, whenever you need a break from doomscrolling, you know where to find him. As Ms. Pomerantz noted, continuity provides comfort in a crisis. The world may be falling apart, but TikTok is, as ever, serving up distraction. And Mr. Kanemura is, as ever, dancing in his confetti-strewn apartment.

Tags: Shelter-in-Place (, social-media
Recent Posts
We and our partners use cookies on this site to improve our service, perform analytics, personalize advertising, measure advertising performance, and remember website preferences.Ok