Actor Alex Désert is to replace Hank Azaria as the voice of Homer’s workmate Carl Carlson in the first episode of the new season of The Simpsons.

Désert, who has appeared in TV’s Better Things and Becker, will take over the role in Sunday’s season 32 premiere.

The move comes after the show’s producers said white actors would no longer voice non-white characters. 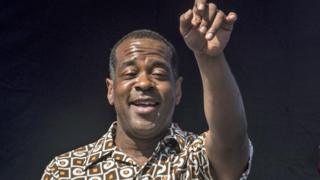 “We are very pleased to welcome Alex Désert, playing Carl in the Simpsons season premiere,” a statement from the show said, without adding further details.

The show had fielded criticism about the portrayal of Indian convenience store owner Apu Nahasapeempeaotiln, who had also been voiced by Azaria.

The new voice of Apu has not yet been revealed. Azaria has also provided the voices for black police officer Lou and the Mexican-American Bumblebee Man.

‘Playing the part you are not’

“I have a very simple belief about acting,” he told Times Radio. “The job of the actor is to play someone who they’re not. That’s the gig. That’s the job description.

“I’m not a rich nuclear plant owner. I’m not a Bible-believing Christian that lives next to Homer. I’m not any of those people.

“I think there’s a conflation between representation, which is important. People from all backgrounds should be represented in the writing and producing ends of the business so they help decide what stories to tell and with what knowledge. Performance… is playing the part you are not.”

Tags: Homer's, re-casts, Simpsons, THE
Recent Posts
We and our partners use cookies on this site to improve our service, perform analytics, personalize advertising, measure advertising performance, and remember website preferences.Ok