Welcome to the T List, a newsletter from the editors of T Magazine. Each week, we’re sharing things we’re eating, wearing, listening to or coveting now. Sign up here to find us in your inbox every Wednesday. And you can always reach us at [email protected].

At Loro Piana, an Installation by Marie Watt 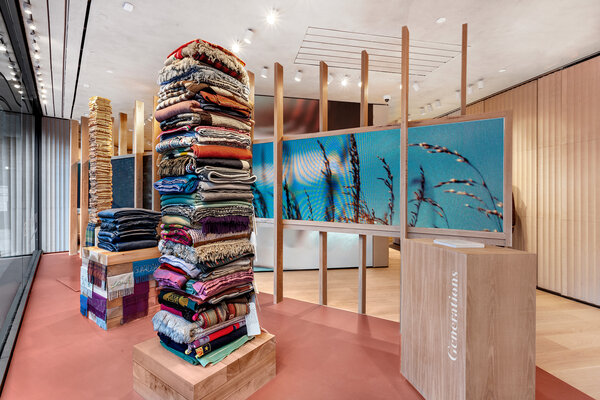 ​Blankets were among the first items produced by Loro Piana, the Italian luxury brand founded in 1924 and known for its lush cashmere, wool and vicuña garments. And so it’s fitting that its ​latest store, designed by the renowned architect Vincent Van Duysen and located in New York’s meatpacking district, is hosting an exhibition of commissioned work by the Portland, Ore.-based artist Marie Watt, whose sculptural practice tends to draw on the blanket as a primary medium or subject. On view through the end of the month, “Companion Species: Acknowledgment, Blanket Stories and Generations” comprises three original works, each depicting a stack of folded throws. For “Acknowledgment,” Watt cast the blankets in bronze, immortalizing them like historical figures in a statue, while “Generations,” carved from reclaimed wood, takes inspiration from the conifers of the Pacific Northwest, as well as Constantin Brancusi’s “Endless Column” (1918). My favorite, though, is “Blanket Stories,” for which the artist, who is a citizen of the Seneca Nation, gathered nearly 50 blankets from friends and family of Loro Piana and pinned to each a hangtag inscribed with a personal story detailing the throw’s significance. Towering several feet high, the sculpture is a vibrant totem of color and pattern. “I often say that we are received into this world in blankets and we depart this world in blankets,” says the artist. Her works, then, are a testament to the rich histories these everyday items carry with them. “Companion Species: Acknowledgment, Blanket Stories and Generations” is on view at Loro Piana through Jan. 31, 2021, 3 Ninth Avenue, New York, N.Y. 10014, (212) 801-5550.

A Low-Alcohol Wine Just in Time for the New Year

A few years ago, the artist, professional cook and author Julia Sherman (known for her ongoing project Salad for President) was looking for a low-alcohol beverage to enjoy. There were few options on the market and even fewer to her liking, so, ever the entrepreneur, she simply decided to make her own. Thus, Jus Jus: Day — produced with Martha Stoumen, a natural winemaker based in Sebastopol, Calif., containing a third of the alcohol content of a regular glass of wine and appointed with a delightful label by the illustrator Joana Avillez — was born. Recently, Sherman launched Jus Jus: Night, a follow-up to her first vintage (this one at 7 percent ABV, or just a little more potent). It initially recalls the gentle pucker brought on by a green apple, but lands with a floral finish reminiscent of a summer melon. Perfect, in other words, for serving chilled in a champagne flute or perhaps dressed up as a kind of spritz. Technically speaking, it’s a take on verjus, the pressed juice of unripened grapes. As Sherman explains, “We take that organic, green juice, tame it with a splash of ripe muscat blanc and ferment it ever so slightly in the style of a pét-nat to create a unique, low-alcohol sparkling beverage. And we never add any sugars, commercial yeast or preservatives.” For those of us hoping to honor at least some of the resolutions we set for ourselves this year (less booze, say, or more vegetables), Jus Jus offers a lenient way forward. $29 per bottle, jusjus.saladforpresident.com.

The multidisciplinary artist Clare Crespo infuses whimsy into just about everything she creates, from the dishes of crocheted food she presented at the Los Angeles showroom of Heath Ceramics in 2010 to the miniature rooms — made of fabric, wood, clay, foam and other materials — she modeled after the full-size ones at L.A.’s Ace Hotel in 2018. But recently, she’s turned to another medium through which to elicit delight: porcelain. Crespo first experimented with the delicate clay in 2018, when the interior designer Pamela Shamshiri commissioned an original work for the lobby of the guesthouse Maison de la Luz in New Orleans, which resulted in an installation of dozens of white porcelain snakes intertwined in complicated nautical knots. Last year, as the world was urged to stay home, Crespo returned to the material, this time shifting her focus to tableware. Made in collaboration with the ceramist Heather Levine, the artist’s new Blue Tiger side plates come in a set of four and were inspired by Delft pottery, as well as Crespo’s Southern roots. A native Louisianian who is now based in Los Angeles, Crespo grew up setting the table with her mother’s Meissen Blue Onion china. “The design was always so perfect to me,” she says: “a soothing color, a fancy but not fussy drawing.” And so she took a similar approach to adorning her own plates, hand-painting the designs with scenes of sliced fruits and vegetables, as well as roaring tigers, a nod to her affinity for wild beasts. As Crespo says, the plates turn every meal into “a little celebration.” $335 for a set of four, heatherlevine.com.

Sol LeWitt used to insist that his point of view was not the focus of his work. “I don’t want to be an art personality because my art has nothing to do with that,” he said in 1974. Often considered one of the founders of conceptual art, he is best known for his wall drawings, of which there are over a thousand. Large-scale and geometric, they can be found around the world, having been installed either by the artist himself or by teams of draftspeople, who applied pencil, ink, paint or even crayon directly to a wall following LeWitt’s precise instructions. Now, the Sol LeWitt Estate, in collaboration with Microsoft, is turning the lens back on the artist with a new app exploring his biography and oeuvre. Simply aim your phone’s camera at any of LeWitt’s wall drawings at a select number of art institutions, and the app will pull up facts about its creation. (It will recognize a picture on your computer screen, too.) You can also scroll through a timeline covering more than five decades of LeWitt’s career, take a virtual 360-degree tour of his Connecticut studio and discover previously unreleased archival photographs and audio recordings. Accompanying the app launch is next month’s debut of “Variations on a Theme,” a podcast that delves further into the artist’s life and work. It is indeed somewhat difficult not to be pulled in by LeWitt’s personality, but the artist also felt that his aim was “not to instruct the viewer but to give information.” In that regard, it seems we are very well served. Download the app here for iOS, or here for Android.

Fanciful Wallpaper to Delight In

After months of confinement at home, I’ve grown more than a little tired of my décor. So when I heard last fall that the California-based textile designer Stevie Howell had debuted a line of cheerful wallpapers, I perked up. Best known for her sumptuous silk robes and slips that are colorfully patterned with intricate, often hand-drawn motifs, Howell expanded her offerings to include fabric a few years ago after she’d begun receiving requests from clients for their interior design projects. Since then, she’s seen her textiles transformed into bed linens, curtains and upholstery — and the next logical step, she thought, was wallpaper. The collection — which features 14 designs digitally printed with water-based inks on clay-coated paper and grass cloth — includes some of Howell’s most beloved patterns alongside a handful of new ones, each available in a variety of colorways. There’s Reach, which depicts a series of outstretched black-and-white hands, as well as Wild Side and Marmorizatta, both exercises in marbling, a calming pastime Howell picked up during quarantine. With a similarly soothing color palette that includes blush, gold and periwinkle, the line is at once charming and uplifting. “We’re all looking at our walls,” says Howell. “And right now, we need pretty things and colors that bring joy.” In partnership with One Tree Planted, the studio will plant a tree for every yard of wallpaper sold. From $70, steviehowell.com.